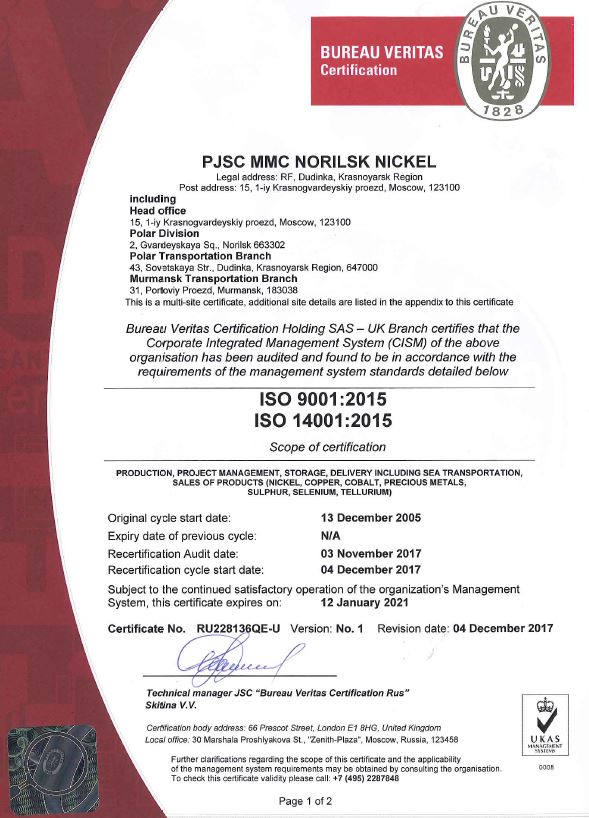 The Russian company behind a massive 15,000 gallon spill of diesel fuel in a pristine arctic region of Siberia holds certifications issued by Bureau Veritas attesting to their quality and environmental management systems.

Norilsk Nickel’s (NorNickel) site in Krasnoyarsk was found responsible for the disaster which is thought to be the result of warming permafrost having softened the ground on which huge oil tanks are stored. The facility performs unspecified mineral extraction activities, and operated a power plant where the diesel was stored.

At the same time, however, the Krasnoyarsk location holds ISO 9001 certification, attesting to its quality management system, and ISO 14001 certification of its environmental management controls. Both certificates were issued by Bureau Veritas, and accredited by UKAS.

The official document certifies that NorNickel’s Krasnoyarsk facility “has been audited and found to be in accordance with the requirements of” ISO 14001. However, that standard requires the company to have risk mitigations in place to prevent disasters that could impact the environment.

According to the Bureau Veritas website, it’s ISO 14001 certification claims to ensure “prevention of work-related illnesses and injuries is the most effective means to manage employee risks, avoid absence and achieve compliance.” The site goes on to claim that “certification to ISO 45001 places occupational health and safety at the heart of your business, securing public confidence.”

Bureau Veritas has been repeatedly found to have certified companies later deemed responsible for deadly disasters or scandals.

Bureau Veritas has received criticism for continuing to certify Brazilian construction firm Odebrecht, which was responsible for what was called the greatest international bribery scandal in human history. Bureau Veritas then went on to reward an Odebrecht executive with a Directorship within BV.

The manufacturer of the flammable materials found to be responsible for the deadly Grenfell Tower fire in England remains certified by Bureau Veritas. That fire killed 72 people, and was labeled the largest UK fire since World War II.

The US Dept. of Defense found multiple major AS9100 nonconformities at Aerojet Rocketdyne, recommending actions against the company, and yet Aerojet held — and continues to hold — certification by Bureau Veritas, who apparently took no action.

Southwest United Industries was identified as the manufacturer of defective slat tracks in Boeing 737 and aircraft after Oxebridge filed a Freedom of Information Act request with the FAA. That company also remains certified to AS9100 by Bureau Veritas.

Bureau Veritas is accredited by UKAS, which has refused to take any action against the company in all of the cases mentioned, and others. UKAS is paid enormous sums by Bureau Veritas for accreditation fees, thus reducing their incentive to enforce accreditation rules.

The registrar was behind the certifications linked to the gas explosion in India which killed 12 people.

More recently, Bureau Veritas began offering unspecified “certification” to random procedures developed by clients themselves. The company has not responded to requests asking for clarity on what, specifically, it is certifying.

The International Accreditation Forum and Bureau Veritas’ two main accreditation bodies, ANAB and UKAS, have all refused to take action against the company.