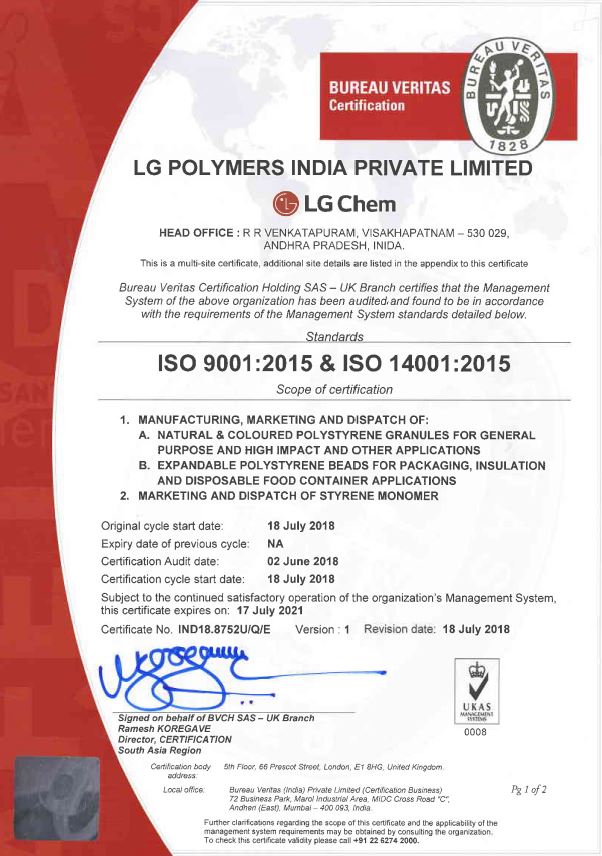 The company operating the chemical plant in Visakhapatnam India which killed 12 people in a massive styrene gas explosion currently holds both ISO 9001 quality management and ISO 14001 environmental management certifications from Bureau Veritas. Officials have claimed they believe the disaster was due to management “negligence,” which would indicate a significant failing of the ISO 14001 system.

The ISO 14001 certificate issued by Bureau Veritas covers the Visakhapatnam location, indicating its’ scope of certification includes “manufacturing and dispatch of” polystyrene granules and beads. The BV certificate number is IND18.8752U/Q/E and appears current. it is signed by Ramesh Koregave, BV’s Director of Certification for the South Asia Region. 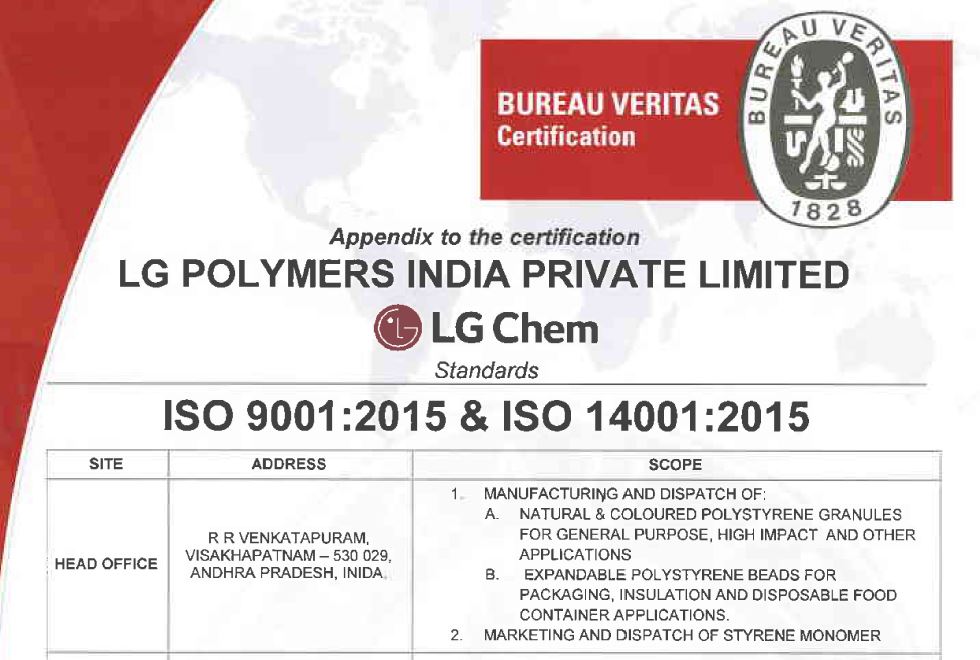 According to news reports, “1,000 people had been sent to hospitals and many others were feared to be unconscious in their homes.” Emergency officials had to break into homes to evacuate the unconscious.

The LG Polymers India website includes a Safety Policy, driven by requirements of ISO 14001, which claims, “Here at LG Polymers India Private Limited of LG Chem, we recognize that Environment, Health and Safety (EH&S) is the fundamental element for securing differentiated competitiveness.”

That policy, featured prominently on the company’s website landing page, then goes on to declare, “We will comply with all applicable EH&S legal requirement and establish leading corporate EH&S rules and best practices.”

According to the Bureau Veritas website, it’s ISO 14001 certification claims to ensure “prevention of work-related illnesses and injuries is the most effective means to manage employee risks, avoid absence and achieve compliance.” The site goes on to claim that “certification to ISO 45001 places occupational health and safety at the heart of your business, securing public confidence.”

Bureau Veritas has received criticism for continuing to certify Brazilian construction firm Odebrecht, which was responsible for what was called the greatest international bribery scandal in human history. The Odebrecht scandals resulted in the fall of multiple presidents throughout South America, including the suicide of former Peruvian president Alan Garcia, who shot himself rather than be arrested for accepting bribes from Odebrecht.

Bureau Veritas then went on to reward an Odebrecht executive with a Directorship within BV.

The manufacturer of the flammable materials found to be responsible for the deadly Grenfell Tower fire in England remains certified by Bureau Veritas. That fire killed 72 people, and was labeled the largest UK fire since World War II.

The US Dept. of Defense found multiple major AS9100 nonconformities at Aerojet Rocketdyne, recommending actions against the company, and yet Aerojet held — and continues to hold — certification by Bureau Veritas, who apparently took no action.

Southwest United Industries was identified as the manufacturer of defective slat tracks in Boeing 737 and aircraft after Oxebridge filed a Freedom of Information Act request with the FAA. That company also remains certified to AS9100 by Bureau Veritas.

Bureau Veritas is accredited by UKAS, which has refused to take any action against the company in all of the cases mentioned, and others. UKAS is paid enormous sums by Bureau Veritas for accreditation fees, thus reducing their incentive to enforce accreditation rules.

Likewise, the International Accreditation Forum (IAF) is tasked with ensuring peer reviews of accreditation bodies, to ensure they enforce rules on registrars like Bureau Veritas, but the IAF has routinely ignored its responsibilities, or outright refused to perform them. The accreditation bodies pay fees to the IAF, completing the circle of conflicts of interest.

Despite the Bureau Veritas certificate for LG Polymers declaring that “found to be in accordance with” the ISO 14001 standard, a statement made without any qualifications or caveats, registrars and accreditation bodies typically claim that such certifications are “not guarantees,” contradicting the language of the certificates themselves.

CORRECTION: The final death toll for the disaster was reported to be 12, not 13 as originally reported. This article has been updated.