The slat tracks are a mechanical assembly related to the front control surfaces of the wings. The defective parts affected Boeing’s 737 MAX and 737 NG equipment.

An announcement by FAA dated December 6th acknowledges publicly for the first time that SUI was the source of defective cadmium-titanium plating used on the wing components, which suffered from hydrogen embrittlement. The FAA announcement further casts doubt on the quality system of SUI, saying that the company failed to mask critical part identification areas when performing the coating, resulting in the parts having their identification obscured entirely. This hindered the resulting investigation further. 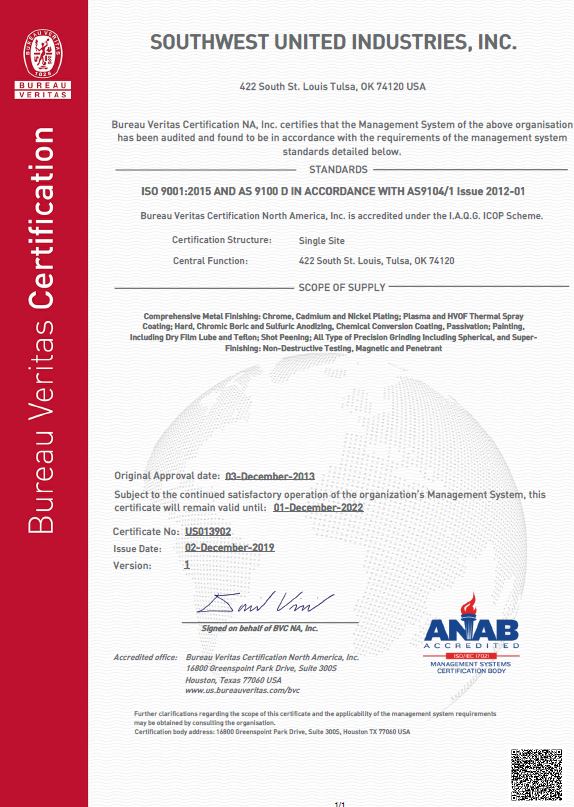 AS9100 certificate issued by Bureau Veritas to Southwest United Industries.

Oxebridge has learned that SUI holds AS9100 certification issued by Bureau Veritas, under certificate number US013902-1.  This certificate was re-issued as recently as December 2, 2019, indicating that Bureau Veritas had attested to the quality system of SUI even as it was being investigated by the FAA.

The SUI certificate was signed by Bureau Veritas’ David Vigil and features the accreditation mark of ANAB.  Vigil has manually blocked Oxebridge on LinkedIn, so could not be immediately contacted for an explanation; he did not reply to emails.

Both certifications should not be possible for a company knowingly shipping defective products.

According to industry records, the original provider of the slat tracks was ASCO, which sold the components to Spirit AeroSystems; Spirit then assembled the wing assemblies for Boeing. ASCO reportedly was one of the only suppliers capable of producing cadmium-titanium plating that met Boeing requirements, and was an industry source for many years without incident. Despite this, a few years ago Spirit chose to change providers and go with SUI, which allegedly provided the plating at a lower cost. Oxebridge has learned that ASCO itself had disqualified SUI years prior, presumably for quality issues.

SUI operates a plant out of Mexico, which is also AS9100 certified, but which apparently does not perform the cadmium plating. Instead, the work appears to have been done by the Tulsa Oklahoma plant.

The FAA announcement reveals a troubling pattern of quality system missteps throughout the supply chain, even if Boeing is the only company currently facing fines. From the FAA information, it is clear that SUI’s quality system fundamentally failed by both allowing defectively-plated products to be intentionally delivered and installed, but also for having the parts improperly masked and thus preventing them from being identified. AS9100 has clauses that would have covered both these conditions, had SUI implemented its quality system properly.

In addition, however, Spirit AeroSystems appears to hold some fault for having switched to a lower-cost provider that quickly resulted in quality problems and an industry scandal. Spirit holds AS9100 certification from Intertek, and the standard also includes clauses governing the control and oversight of a company’s suppliers.

Neither Spirit nor SUI appear to have faced any special audits, investigations or issues raised by their respective certification bodies, despite the public release of the information raising questions about their quality systems.

Boeing does not hold AS9100 certification, however, despite being the key author and powerhouse behind the AS9100 scheme itself. Ironically, Boeing is the only company in the supply chain facing FAA punishment.

The FAA has yet to complete its response to Oxebridge’s FOIA request, which may result in additional information being revealed. Oxebridge has argued that unmasking the plating supplier — now known to be SUI — is critical, in order to identify if the supplier released defective products to any other aerospace company, or to any other industry. The FAA announcement only increases the possibility of this being the case, as FAA indicated SUI admitted to another supplier — Kencoa Industries of South Korea — that defective parts had been shipped. It’s not known what parts SUI processed for Kencoa, or why SUI admitted the issue to Kencoa, but not to either Spirit or Boeing. It was Kencoa that passed the information onto Spirit, not SUI.

SUI is a daughter company to PCC Aerostructures. According to the company’s website, SUI provides products for aerospace companies in addition to Boeing, including for Lockheed Martin, Honeywell, Northrup Grumman and many others. The quality of products shipped to all those clients is now suspect.

The US Dept. of Defense conducted an audit at Aerojet Rocketdyne, also certified to AS9100 by Bureau Veritas, and found  14 major and 28 minor nonconformities; nevertheless, the company was recertified by Bureau Veritas without incident immediately thereafter.

Bureau Veritas also certified Munilla Construction Management of Miami, which oversaw the construction of a pedestrian bridge which collapsed and killed six people.

The registrar also certified Arconic, the manufacturer of the flammable construction materials which were said to have caused the deadly Grenfell Tower fire, killing 72 people.

The construction company Odebrecht continues to hold multiple ISO certifications issued by Bureau Veritas, despite being at the heart of the Lavo Jato bribery scandal, considered the largest international bribery scandal in history, according to the US Dept. of Justice. Multiple South American governments have been impacted, and four of Peru’s former presidents were implicated; one committed suicide when police attempted to arrest him for his role with Odebrecht. Despite this, Bureau Veritas awarded an Odebrecht employee with a Director position, and continues to issue the company ISO certificates across the globe.

To date, neither ANAB nor the IAF have taken any actions against Bureau Veritas, which pays tremendous fees to the bodies for use of their accreditation marks.