A damning report issued by the US Department of Defense Inspector General’s office lays to waste the notion that ANAB accredited third-party AS9100 audits provide any confidence of quality assurance.

The IG’s office conducted an audit to evaluate the quality management systems of three aerospace firms bidding on the Evolved Expendable Launch Vehicle contract, or EELV. The audits were conducted against AS9100 revision C, and were done at SpaceX, United Launch Alliance, and Aerojet Rocketdyne. In all, the IG’s office found 68 major nonconformities and 113 minor nonconformities at the three companies. While both SpaceX and ULA were audited as prime contractors, Aerojet was audited given its role as main subcontractor to ULA.

The IG’s report blasted the quality systems of all three firms, concluding that the three companies increased the risk of mission failure:

We determined that ULA, SpaceX, and AR were not performing adequate quality assurance management for the EELV program as evidenced by the 181 nonconformities to the AS9100C at the EELV contractor production facilities. This inadequate quality assurance management could increase costs, delay launch schedules, and increase the risk of mission failure.

An ANAB-accredited firm cannot issue an AS9100 certificate to a company with only one outstanding major nonconformity, and yet the IG’s audit found over five dozen such “majors” that presumably went undetected by three separate registrars, or were ignored and AS9100 certificates issued anyway. The report provided the following breakdown:

The report does not name the CBs or ANAB directly, but is a particular black eye for the accreditation body since it is the common link between the three firms and their three CBs. ANAB is tasked with overseeing each CB’s compliance to ISO 17021 as well as aerospace accreditation rules such as AS9101. Making matters worse for ANAB, it’s current Accreditation Manager for Aviation, Space, and Defense is Dale Gordon, who previously worked for Aerojet Rocketdyne as Director of Supply Chain Management. Gordon is also active on the International Aerospace Quality Group (IAQG), which oversees the development of AS9100 and the surrounding certification scheme.

The major nonconformities listed range nearly the entire spectrum of AS9100 clauses, including configuration management, calibration, and supplier controls. Preservation of product, and specifically a lack of FOD controls, was the number one highest nonconformity cited, with 33 findings under that clause alone. 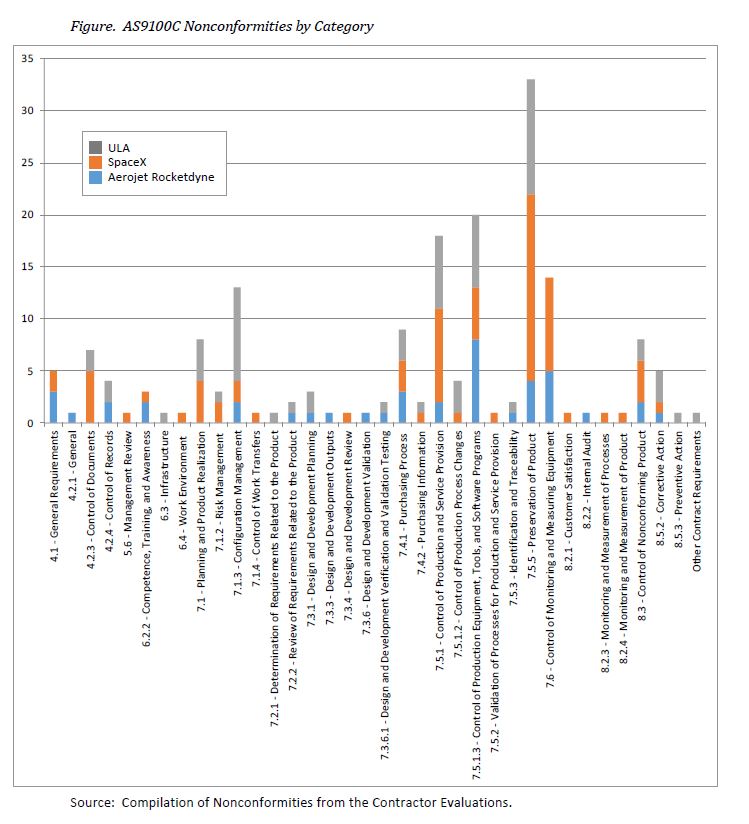 ANAB had not responded to a request for comment prior to publication of this article.

Oxebridge has reported heavily on ANAB’s abdication of responsibility within the industry, arguing that the accreditation body is more interested in protecting its CBs — who fund ANAB through the payment of accreditation fees — than enforcing accreditation rules.  In 2014 ANAB refused to witness the certification audit of one of the companies mentioned in the IG’s report, despite concerns predicting a weak audit by the CB; ANAB cited obscure policies and inability to determine who would pay for the special visit.

Unlike similar-sounding arguments published by unaccredited certificate mills, Oxebridge is not suggesting companies avoid accredited certification and merely buy counterfeit certificates online. Instead, Oxebridge has called on the US Dept of Defense to issue a 10-year moratorium on requiring ISO 9001 or AS9100 certification as a condition for obtaining US contracts, until such time that ANSI can force ANAB to implement suitable corrective actions to bring the accreditation body into compliance with international accreditation rules. To date, both ANSI and ANAB have refused all suggestions for common-sense improvements, while the organizations are increasingly found to be at the center of scandals, disasters and fatal product recalls.

The full IG report can be read here.