Score another one for the good guys. Despite posturing and pounding his chest, the CEO of the UK’s Chartered Quality Institute and the auditing certification body IRCA, Vince Desmond, has caved and added a “diversity” statement to the CQI’s “About Us” page.

Desmond previously refused to commit to doing so, simply because he didn’t like the “tone” of the question, nor the fact that I was the person who asked him. Desmond is furious regarding reporting by Oxebridge that showed a CQI member falsely claiming that unaccredited training “diplomas” in the field of quality were, in fact, accredited by CQI. That claim is wholly untrue, since the CQI is not an accreditation body for educational institutions in the UK. Desmond, however, refused to take action against the member, and instead puffed up his chest to try and shift the argument to the “tone” of the reporting.

Now, CQI is being investigated for potential fraud in the UK, for knowingly allowing its members to sell products under the false claim of “CQI Accreditation,” which doesn’t exist.

Stinging from all that, when I asked Desmond to simply “denounce racism,” he again rejected the request, citing “tone.” So we launched a social media campaign around the hashtag #burnyourIRCAcard and told auditors to quit IRCA altogether, and move to a competing auditor certification.

We then contacted the CQI Board members — two of whom are Black — and advised them of Desmond’s despicable posturing.

Oh, yeah, and then I turned Desmond into a literal cartoon character.

That seems to have gotten Desmond’s attention.

The CQI page now includes this statement which at least addresses diversity, even if it relies on a false claim that makes it appear the organization has a robust diverse hiring process (the leadership is overwhelmingly white.) 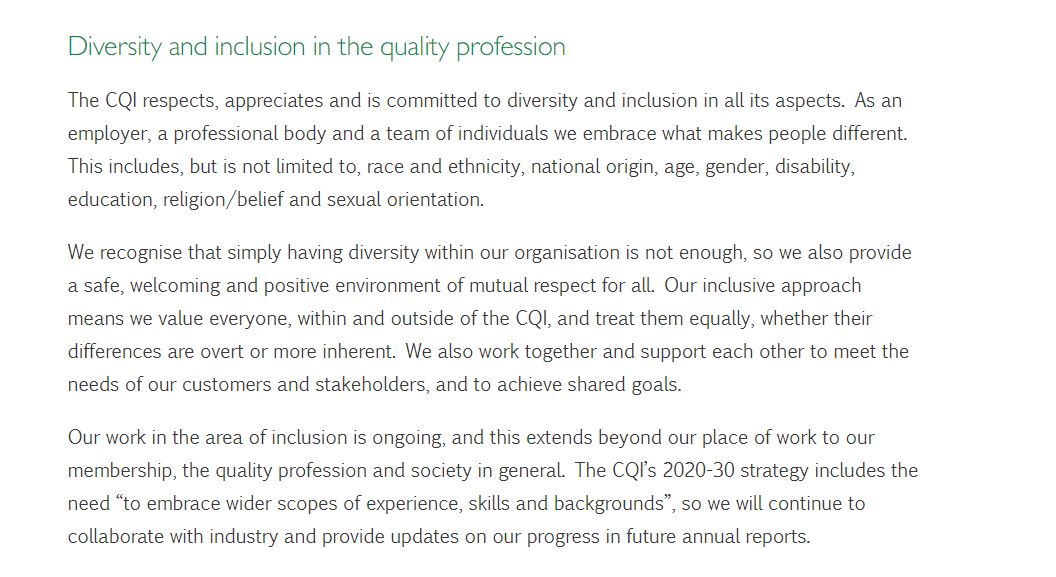 At least it didn’t take CQI over 800 days to add a diversity statement, the way it did ASQ.

Notice how they tried to retcon an existing goal of “embracing wider scopes of experience, skills and backgrounds” to suddenly include race. Umm…. no one’s falling for that, but nice try.

But let’s see if they mean it, or if — as I suspect — this was a craven move to get out from under that #burnyourIRCAcard campaign, and hope everyone will just forget about it. My radar says this is nothing more than “corporate blackface,” a way for an all-white organization to pretend to be sympathetic to people of color just in order to keep the money rolling in.

As for CQI’s claim they intend to have “mutual respect for all,” they really need to update that so it says “except for Oxebridge.”

Desmond, meanwhile, still needs to go. Someone that overwhelmingly toxic should not be leading a chartered UK charity, period.