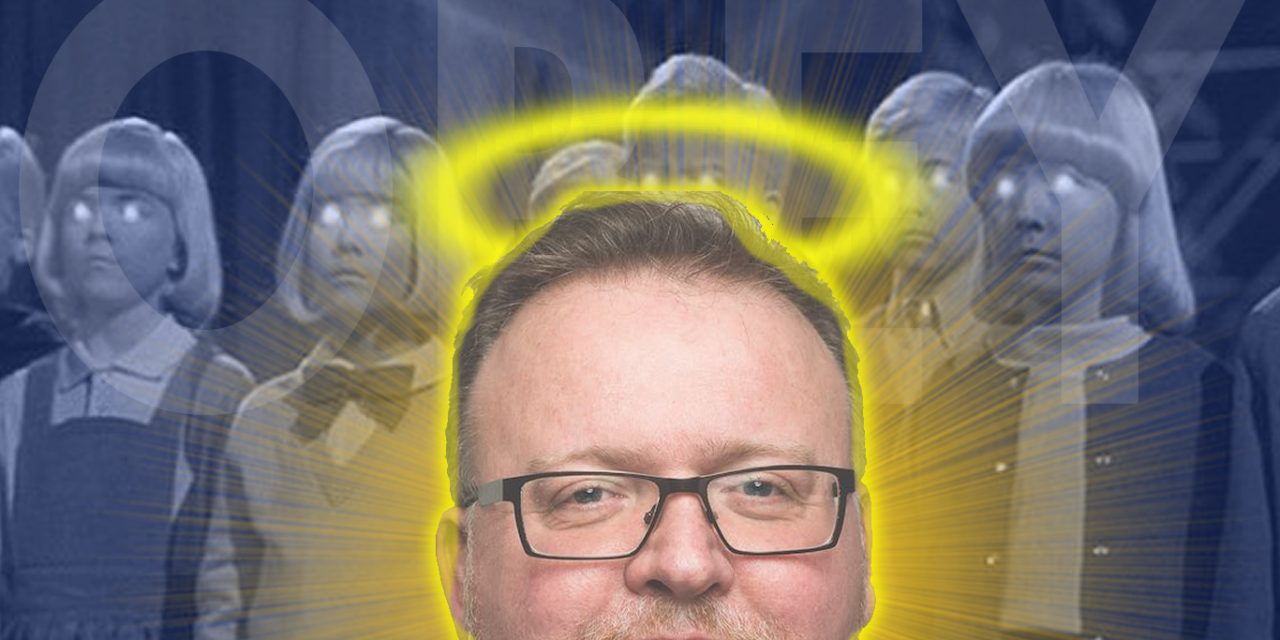 The CEO of CQI, Vincent Desmond, took a very strange and hostile posture when asked some simple questions about whether or not the Chartered Quality Institute is an official accreditation body for UK colleges.

The issue arose recently when CQI member David Hutchins falsely claimed that the “diplomas” issued by his made-up vocational school, the David Hutchins International Quality College, are “accredited.” The claim is made repeatedly on his website, such as seen below:

A search of all UK government listings of accredited or otherwise recognized educational institutions does not produce a single listing for Hutchins’ school. Furthermore, Hutchins’ own site has no evidence of being “accredited.”

Worse, Hutchins is trying to claim his made-up “diplomas” are equivalent to a Bachelors Degree from a real accredited university:

When asked, however, Hutchins wrote the following:

Check with the Chartered Quality Institute. I was commissioned to create their Ofqual approved Level 5  Diploma and was also approved by them to deliver the course which is what we do and have done since 2010. As a consequence, some 100 or so of our past students are now Chartered Quality Professionals. From your profile, it seems, unless I have missed something, that this is higher than your own Qualifications.  We are also Registered by the Chartered Institute of Management for another of our qualifications. I seem to be causing you some distress. What is the problem?

Ignoring the petty insults (in all fairness, I called him an “old git” in response, because I figured “bellend” would give him a stroke), none of what he wrote amounts to “accreditation” of Hutchins’ college. The Ofqual accredited course is issued by CQI, not his college, so it is CQI that is accredited. That’s clear by the Ofqual website listing for the class (assuming Hutchins really did have something to do with it):

Neither the CQI nor CMI offer offer accreditation themselves, which would put thems subject to certain UK education-related laws. Which means, then, that the diplomas from the Hutchins International Quality College remain entirely unaccredited, and therefore are not recognized as any kind of official educational degree. Per the UK.Gov website:

If your degree is not from an officially recognised UK university or college, there’s no guarantee it’ll count when you’re looking for a job.

Worse, Hutchins seems to be claiming official CQI accreditation just because “some 100 or so” of his past students are members of CQI.  One can’t claim accreditation by a body just because some customers coincidentally belong to that body. It someone from UKAS buys a coffee at Starbucks, it doesn’t mean Starbucks is suddenly UKAS accredited.

So I did exactly what Hutchins told me to and “checked with the Chartered Quality Institute.” I wrote to CQI’s CEO Vincent Desmond for clarification. Here’s my actual email, along with a screenshot of the entire thing, so you know I’m not making this up:

David Hutchins is claiming that his International Quality College is “accredited” by CQI. Yet there is no evidence in any UK government registry that his college is accredited, nor that CQI is an official accreditation body for higher education institutions nor vocational schools. Can you clarify?

Specifically, has CQI officially “accredited” Hutchins school, and if so, can you provide records of this (perhaps an accreditation certificate)?

Your answers may be published.

The email is tepid and merely asks some basic questions. Nevertheless, Desmond refused to answer, and instead demanded I change my “register and tone” if I expected him to respond at all:

With reference to your email below, you will need to improve your register and tone if you wish to correspond with me. 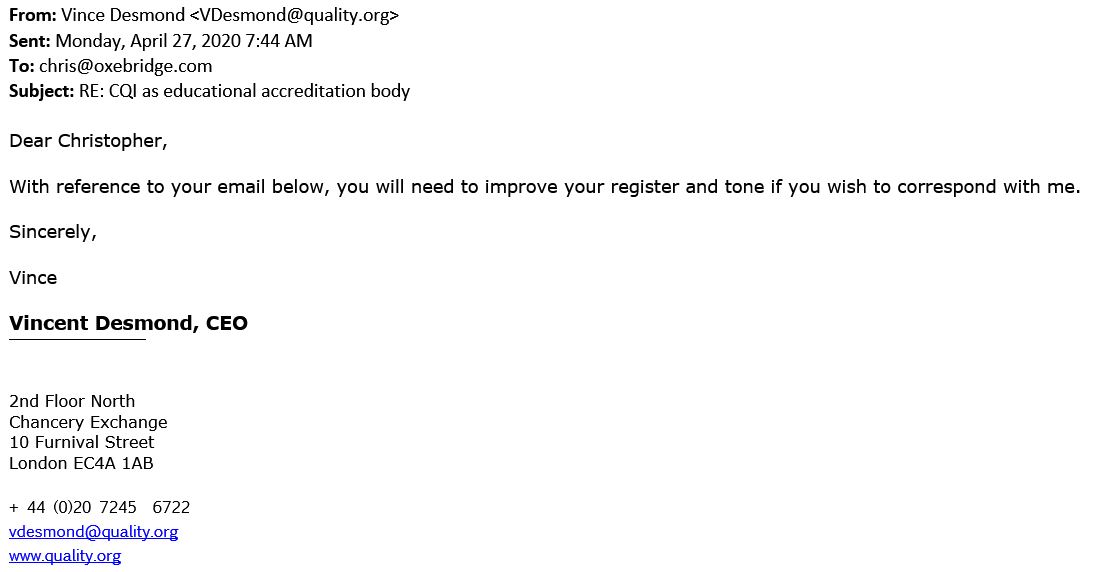 I suspect Desmond is upset about the jokes I made in THE AUDITOR comic strip about CQI being a cult, but his email is not clear on this. It appears he feels CQI and he, personally, are above responding to questions from the press on a valid concern: whether Hutchins and/or the CQI are fraudulently claiming to be official UK educational accreditation bodies.

I get that Desmond isn’t accustomed to being asked uncomfortable questions — cult leaders avoid those sorts of things, and clearly CQI doesn’t have the legal resources of, say, the Church of Scientology to harass anyone who does. But he’s going to have to answer the questions one way or the other.

Either Hutchins is lying, and engaged in false advertising in violation of UK law, or both Hutchins and CQI are. This is not a comfortable place for either of them to be in.

So now we (once again) escalate the issue to the appropriate oversight bodies, while I prepare (once again) a complaint to the UK’s Advertising Standards Agency, alleging false advertising. Also, I’m looking into which arm of the UK’s educational ministry I need to contact to get this cleared up.

If Desmond didn’t like my “register and tone” so far, he’s not going to like what’s coming.

This, folks, is where your CQI fees are supporting. Keep it in mind.