There’s a bad industry practice called “gold nugget auditing,” where an auditor — usually a bored one — suddenly thinks they have found a detail in a standard that no one else has ever discovered. This never ends well, and this real-life account of a PRI Nadcap audit gone bad is a cautionary tale, given that it could literally bankrupt companies across the planet, and cause industry-wide disaster.

For those that don’t know, “anodize” is a coating applied to metal parts, typically aluminum or titanium, to improve corrosion resistance. The coating is very thin, adding thickness to the original part by about 0.00002 to 0.0005 inches, depending on the process type used. Using the metric scale, this is typically measured in microns. As a result, most anodize shops perform quality inspections on their processed parts by using sensitive thickness measurement probes; these are often sophisticated, if handy, electronic instruments that measure the thickness of the coating at the micron scale just by touching a probe to the surface. (See this page by DeFelsko for a great primer.) An inspector can “touch” multiple spots on the surface of an anodized part to do a fairly comprehensive inspection. 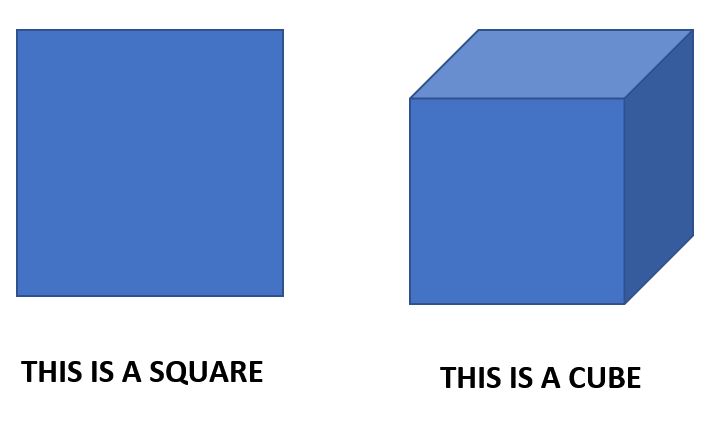 Keep that in the back of your head for now.

Our story begins with a Nadcap accredited anodize process provider who received an audit nonconformity from PRI against the MIL-A-8625 anodize specification. That standard was originally published by the US Dept. of Defense decades ago, and is now published by SAE, although authored by Naval Air Warfare Center, known as “NAVAIR.” The auditor argued that the client company was not performing “dimensional inspection,” but only doing thickness checks using a probe, and that this violated the MIL spec. A finding was written, but the client appealed. The issue was escalated to PRI’s Lead Staff Engineer for Chemical Processing, Nigel Cook, who commissioned a committee (sigh) to look into the matter. This committee included at least one representative of (sigh) Boeing, Andy Murphy.

The result was that the PRI’s “committee” sided with PRI’s auditor, which should surprise no one. But in the process, PRI was forced to ignore not only decades of prior industry experience with MIL-A-8625 (which has existed since the 1970s), but then reject millennia of Euclidean geometry. 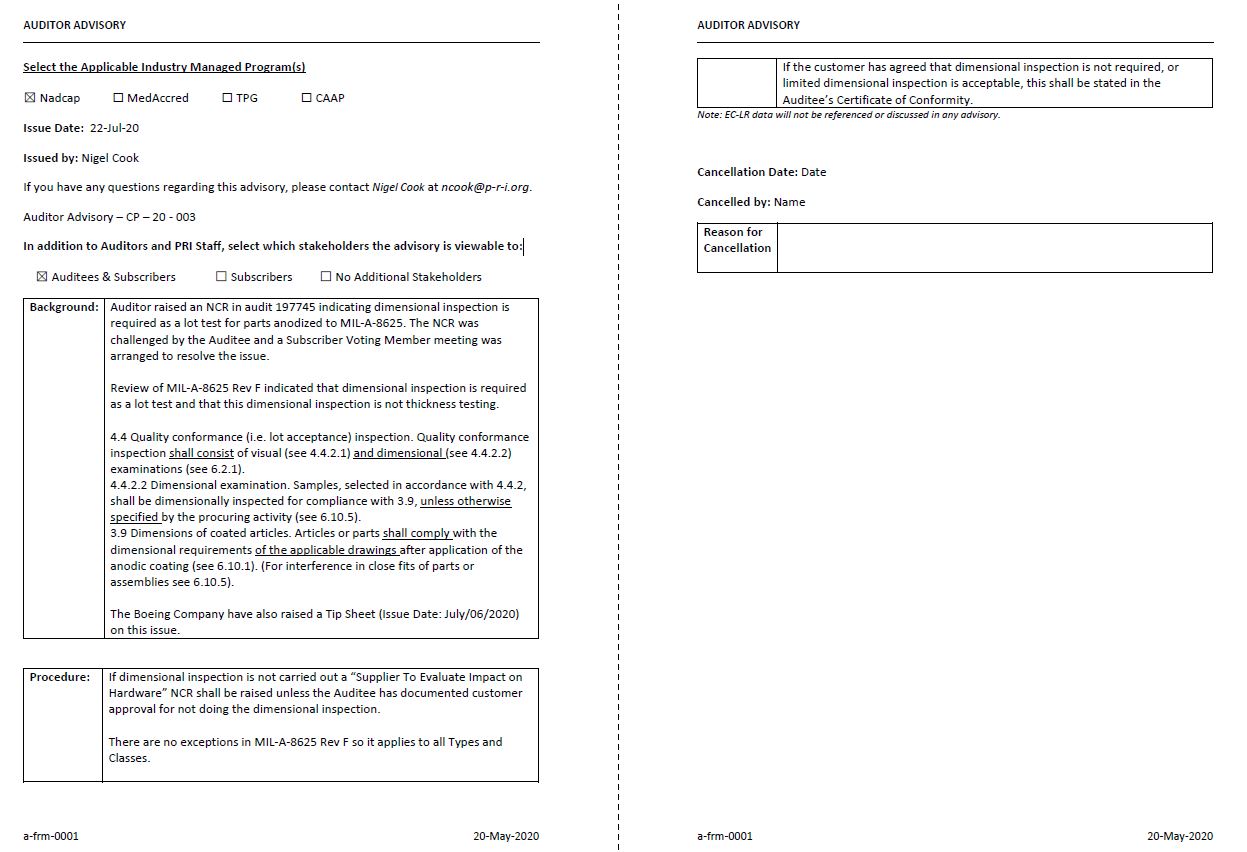 PRI then went on to alter the entire anodize industry in one dramatic stroke of the pen, demanding that Nadcap accredited anodize houses conduct lot inspection on all dimensions, not just thickness, unless otherwise specified by the customer. Since these parts are dipped in tanks, except for some characteristics which are masked, this means virtually every single dimension.

This would require anodize houses to invest in multiple inspection machines, including million-dollar CMMs (coordinate measuring machines), and a host of calibrated gauges, tools and devices. And, according to Nadcap, it wouldn’t be a single part done as some sort of “First Article” after processing, it would be an actual lot sample. In short, the time spent on dimensionally inspecting the parts could be as much as ten times the amount of time used to apply the anodize coating in the first place. To maintain the aerospace industry’s demands for “on-time delivery,” therefore, anodize shops will have to hire armies of inspectors, working three shifts, even for the lowest-profit batches they produce.

This ruling was then supported by Boeing’s Murphy, who issued an official “Boeing Tip Sheet” reinforcing this revisionist history, because Boeing will never lose an opportunity to impose something on everyone else that they have no intention of doing themselves: 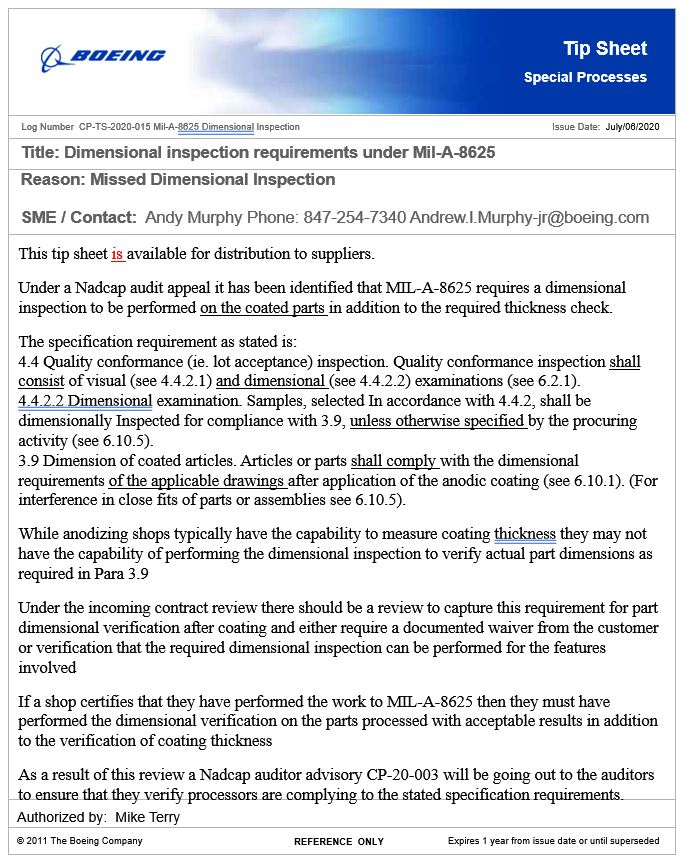 To put it simply, this decision by PRI and Boeing will literally bankrupt a big section of the industry.

In fact, multiple tables in the MIL spec clearly and intentionally link thickness with dimensional characteristics. Both the PRI Advisory and the Boeing Tip Sheet direct the reader to clause 6.10.5 of the MIL spec, ignoring that this clause is applicable to the part designer, not the anodize shop. But ignoring that wrinkle, the section literally links the concepts of “coating dimensions” with “thickness”: 6.10.5 is titled “coating dimensions,” but which then provides a table (Table IV) that defines these “dimensions” by discussing “thickness ranges.”

PRI and Boeing dig in, too, indicating that performing dimensional inspection of all affected characteristics is the default, too, unless overridden by customer requirements. Which means that anodizers have a way out, but it’s complicated. In order to maintain Nadcap accreditation for anodize, each shop will have to get waivers from each customer that allow them to perform thickness testing only, and thus waive any other dimensional inspections. As anyone working in aerospace knows, getting such waivers will not be easy, as many large aerospace primes won’t even respond to such a request, never mind grant it.

Another way out is to examine the print. The MIL spec defers to the design data, and the PRI ruling does reference this (even though they do so while beating up the anodizer, who typically has no design authority on the parts being processed.) The anodizer must inspect the dimensions indicated on the print for after-anodize dimensions. While many prints indicate both pre-process and after-process dimensions, many others don’t.

But, again, we are back to the false insistence that a “dimensional inspection is not thickness testing,” and thus — following the logic — that thickness is not a dimension. We’ve understood that a cube is made from three dimensions — length, width and depth — and not only two. PRI and Nigel Cook would have us ignore the third dimension entirely.

Which means PRI’s model for geometry looks like this: 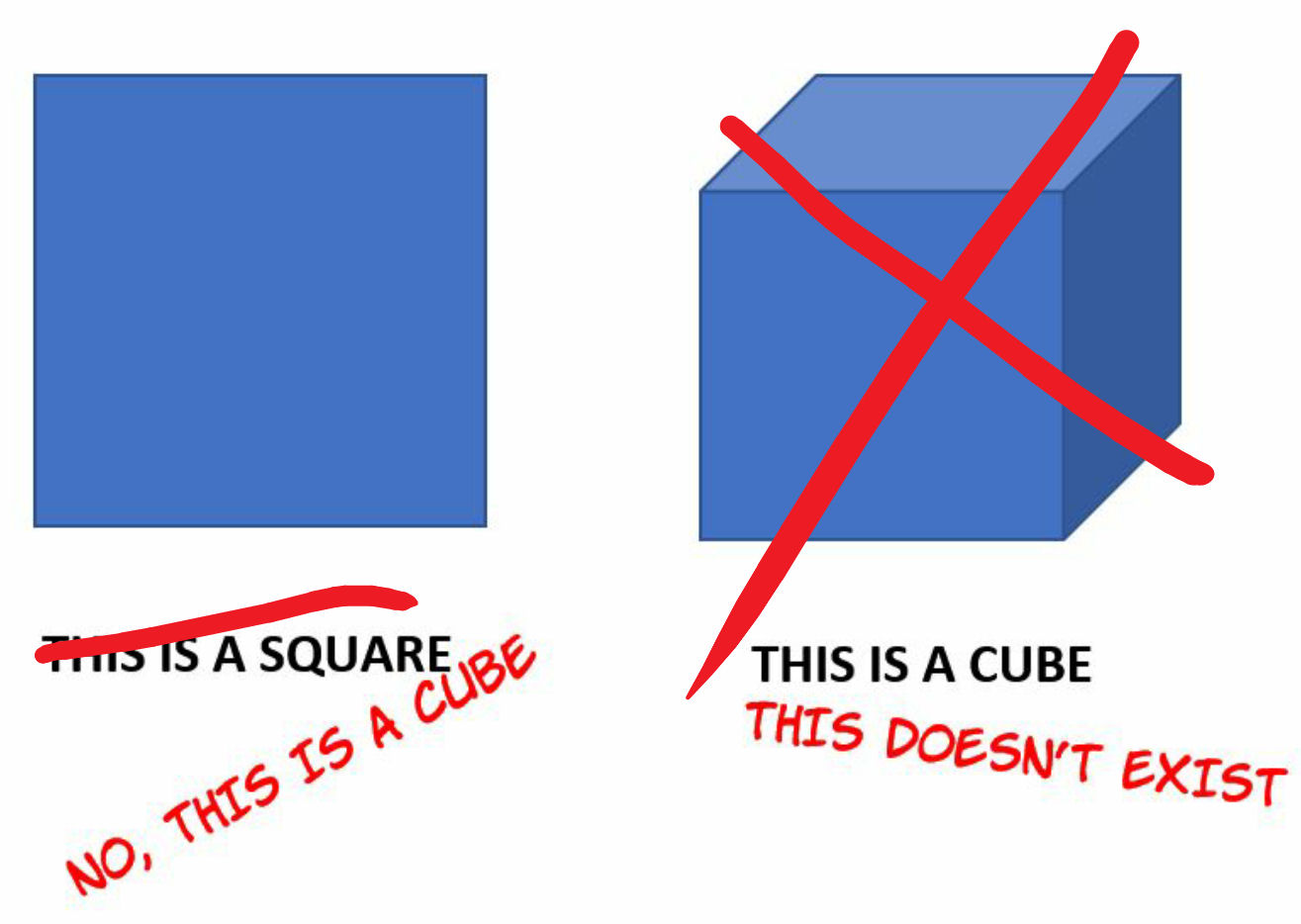 Clearly, if the print indicates a before-anodize dimension of 0.1000″, and a post-process dimension of 0.1001″, then I could reasonably use a thickness tester to determine if the wall thickness had increased by 0.0001″ as required. But PRI is now essentially telling you how to conduct the inspection, and that you’ll have to use a caliper or CMM that can read out to the 0.0000x” decimal place in order to verify that dimension.

One anodize special process expert with GKN Aerospace was troubled. “As an anodizer, this never ends well,” he told me. “To ensure that the post measurement is reflective of the coating build, which is small in some cases, the anodizer will need to check the machined dimension before coating.” What this means is that the anodizer would not be able to trust the print’s pre-process dimensions, and would have to verify them themselves. Now you’ve doubled inspections: a full inspection before, and another one after.

Another anodize shop wrote the following:

[The customer makes us] responsible for size, as well as thickness. Even if we put correct amount on, per thickness requirements, if the part is not to size we are at fault.

Before your head explodes, example: customer wants .0018-.0022. You anodize it to .0019, however the part needed.0021. They are saying it is our fault the part is undersize. Even though you did exactly what they required. NADCAP is picking at more and more to justify their existence!

Let’s look at this from another angle. The MIL spec has been around, as I’ve said, for decades. Worse, PRI has been auditing over 1,000 companies for Nadcap special process accreditation, and many of those for a decade or more. It’s only now — in the year 2020 — that some auditor “found” this problem. And no one at PRI thought it might be odd that they’ve come up with an interpretation that seems to have gone un-noticed for, at least, over forty years. This is classic “gold nugget auditing.”

There was almost a happy ending here. Industry players decided to do what Cook and Murphy and PRI and Boeing couldn’t, and contact NAVAIR, the actual author of the MIL-A-8625. Within literally minutes, the NAVAIR office head referred the matter to Rade Savija, the Materials Engineer that NAVAIR management said was the “engineer in my office that is responsible for MIL-A-8625.”

An anodize industry source wrote to Savija, saying, “It is our opinion for the finishing the anodic thickness being recorded should be the only requirement for lot testing not dimensional growth. ” Savija responded:

You are correct that dimensional inspection should not be a lot acceptance test.

One would think that would be the end of it. The parties then notified Cook at PRI — and I followed up with my own email, asking that the original PRI nonconformity against the client be withdrawn, as well as the Auditor Advisory and Boeing Tip Sheet, saying, “the statement in the PRI Auditor Advisory that ‘dimensional inspection is not thickness testing’ is not true.”

Cook was not having it, though:

No, that is not correct – the official authority of MIL-A-8625 has stated that they will change the wording in the next revision.

So Cook took all the wrong lessons away from this story, because he knows how to use “word search.” Despite the official source of the MIL spec weighing in and trying to clarify, and despite a view that contradicts the simplest high school geometry, Cook and PRI are going to hold fast. They have made themselves the ultimate standards authority, overruling the guys who actually write it. Then, apparently, they are going to ignore decades of precedence and stick to their finding — all to support their one auditor — until the MIL spec is dumbed down for people who don’t understand how geometry works.

Ignoring Boeing’s typically incompetent contribution to this tale, the PRI ruling will force anodize companies to seek an entirely different waiver, not one solely related to excusing them from dimensional inspection. Instead, they will reach out to the aerospace primes and request that Nadcap accreditation be waived, because of poor interpretations which will cost the aerospace industry billions in needless add-on costs.

So, perhaps it is time to drop Nadcap accreditation altogether. You can justify this by telling Boeing and other aerospace primes that due to the interpretations of people like Cook, any parts processed under Nadcap rules will cost at least ten times as much, and take much longer. Let the customer decide if they really want to pay that much for a piece of paper.