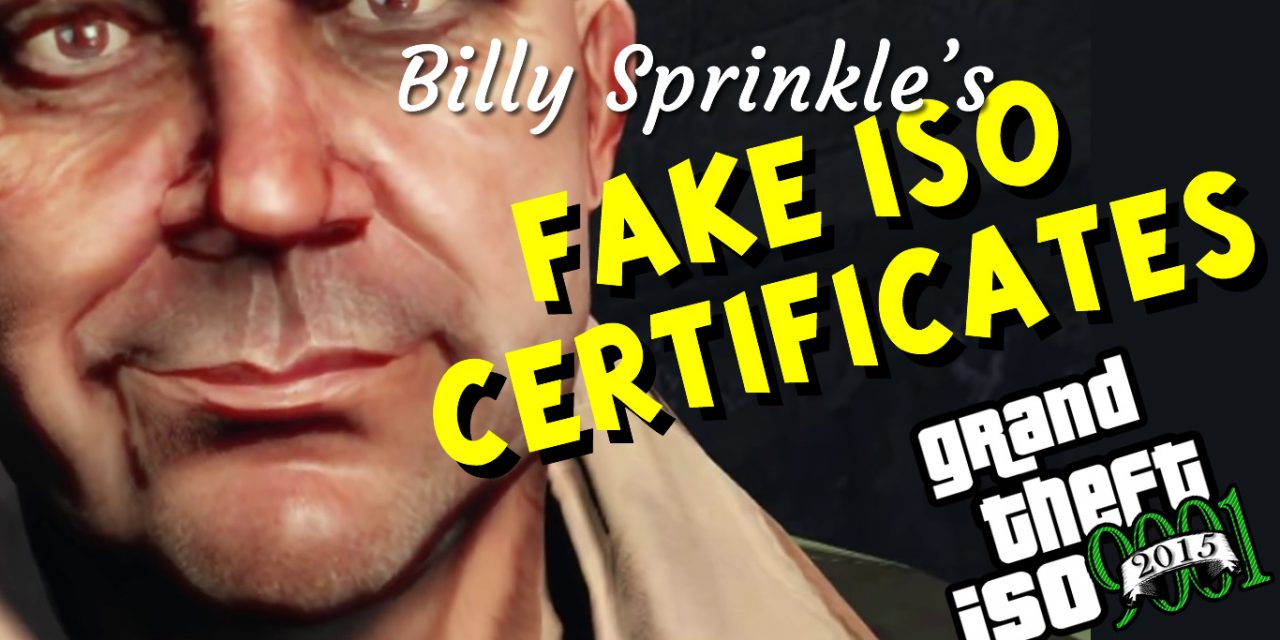 IAF is in full-on, damn-the-torpedoes, screw-the-decaf mode with its latest push to promote it’s already-doomed “global” ISO certification database, CertSearch. Not only did they release a cringeworthy video featuring a rogues gallery of the idiots responsible for CertSearch, someone in their marketing team thought it would be smart to tweet a graphic that implies any non-IAF certificate is “fake.” 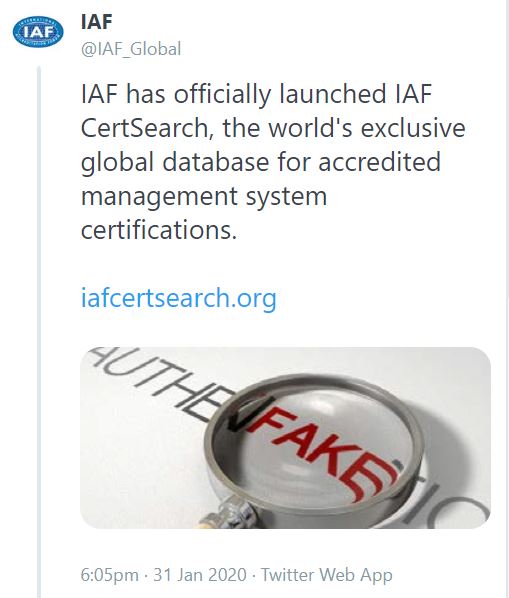 Maybe at first blush the use of the word “fake” seems harmless, but it’s not, and once again the underinformed, overconfident dummies at IAF are itching to get their bank account emptied in a massive lawsuit.

Let me put this simply: you can’t call your competitors’ product fake. That’s defamation and libel. It also implies that somehow your products are “authentic,” which is just an outright lie, but man would I love to get the IAF in the dock to have that conversation under oath.

When pressed, both ISO and the IAF have to admit that there is no law requiring accredited certification. Mind you, I am pushing to get a law, and they aren’t, so I’m doing more to support their field than even they are (you’re welcome, Elva.) But for now, that’s the reality we live in: there is no legal distinction between an ISO certificate issued by an IAF member Accreditation Body (AB), one issued by a non-IAF member Accreditation Body or one issued by Billy Sprinkle from his piss-stained box under a bridge in Los Santos. This is why I have always been cautious to call non-IAF certificates “self-accredited” — when they are issued by a body that also operates its own AB — or “unaccredited” — when they lack any accreditation at all.

The certificates issued by guys like Del Straight, Jack T. Bogle, Dennis Hughey and QAS International have no accreditation whatsoever (although occasionally have meaningless logos on their certs), and so are “unaccredited.”

The certificates issued by companies like Guberman-PMC, American Global Standards and Craig Willetts are “self-accredited” because they each claim accreditation by another body run by the same people who run the certification body.

The issuance of unaccredited or self-accredited certificates is, we can agree, highly unethical. The entire process of “certification” is supposed to attest to the quality something, and reasonable people agree you can’t self-attest to your own quality. Yet these “mills” do just that, whether hiding behind a conflicted accreditation body they just invented to appear serious, or not bothering to even self-accredit. Both scenarios violate ISO 17021 and ISO 17011, too, the international standards on accreditation. Both schemes are called “certificate mills” because they are not independently accredited.

But here’s IAF’s problem. Those ISO accreditation rules are optional — “voluntary” in official parlance — and not codified in law. Companies can choose to use an IAF-matrixed certificate, or buy one that Willetts or Bogle printed up in his basement. Both options are legal. And, yes, one is unethical, but there’s no law against being a dick.

And yes, IAF has to acknowledge that the certificate mills are their competitors. They are both legal players in a global marketplace. The IAF doesn’t get to decide that the companies stealing its business aren’t competitors solely because they are an unwashed, unseemly bunch of assholes. They are still competitors. That means the IAF can’t try to get an advantage over them by falsely claiming any certificate issued by entities other than the IAF is “fake.” Because it’s a baldfaced lie, and its openly libelous. It’s also probably illegal under US FTC trade laws.

Making matters worse, the IAF has proven that it doesn’t uphold the ISO accreditation rules anyway, allowing its so-called “accredited” bodies to violate them at will. Even when such bodies are involved in literal crimes, the IAF works to protect the bodies, not hold them accountable. If pressed in court, the IAF would likely be forced to admit, on the record, that its certifications are no more valid than those of Billy Sprinkle.

The IAF, as usual, isn’t doing itself any favors by failing to talk to a lawyer before launching ill-advised tweets and facepalm-worthy ad campaigns. I get that Elva Nilsen and Sheronda Jeffries and the rest over at IAF really believe they are the Second Coming of ISO Jesus, but they are going to get humbled fast if they ever get dragged into court to explain themselves.

Instead, IAF should join Oxebridge in two key endeavors:

First, enforcing the accreditation rules on IAF member ABs and their CBs, so that IAF membership means what they say it does. This will hobble any argument that IAF accreditation is, itself, “fake.”

Second, using its influence to get a law passed that does make it illegal for any ISO body to issue either an unaccredited certificate, or one accredited by a company owned by the same people. Yes, that’s a heavy lift, but it’s worth trying.

I suspect, however, that IAF is both lazy and cheap. They don’t have the energy or the money to do either of those things, and so instead will rely on god-awful videos making dubious claims about their dubious membership, while spending all their time encouraging bad behavior of their members.

[PS: I get that no one reading this knows who the hell Billy Sprinkle is, but trust me, just click this and watch it through until the end. Make sure the kids are out of the room. Or not.]