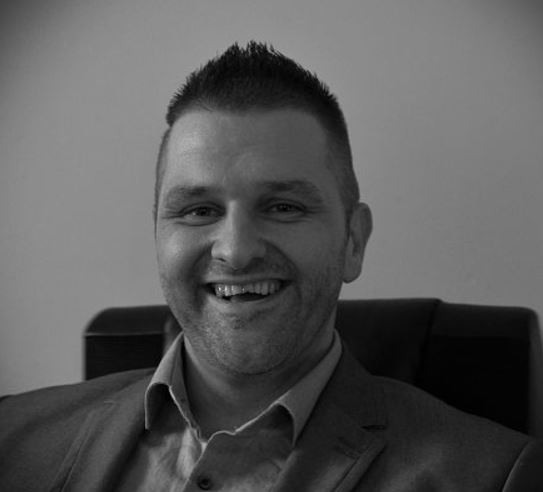 Meet Craig Willetts, self-proclaimed “business expert” and owner of CAW Consultancy in Euxton, Lancashire UK. Willetts does the usual ISO consulting thing, but with a twist: he also offers certification under his other company CAW Accreditation Services LTD. [Update: that website is now defunct, replaced with “CAW Certification Services” here. It seems, like Gugerman, Willetts creates new “companies” at the drop of a hat.] As usual, Willetts engages in the usual certificate mill behaviors, by referring to himself in the third person plural (“we”), slathering his name over everything, and claiming expertise in a ridiculously huge range of standards. He also offers certifications for standards that weren’t even designed for certification, like ISO 31000 on risk management.

Like all certificate mills, Willetts isn’t opposed to certifying his own work, so you can get the consulting, certification and accreditation all from him, bypassing those pesky regulations against conflicts of interest. He’s also totally smug about it one minute, but then fleeing from scrutiny like a coward when pressed. When I asked Willetts if he was a certificate mill, he ran the usual “mill defense” — even including the bad grammar and spelling typically seen by idiot mill operators — and told me:

Quite the opposite, we are ruining [sic] the certification to the same standards as UKAS and all auditors are impartial, we provide a low cost alternative for smaller companies looking to raise standards but thanks for your feedback. 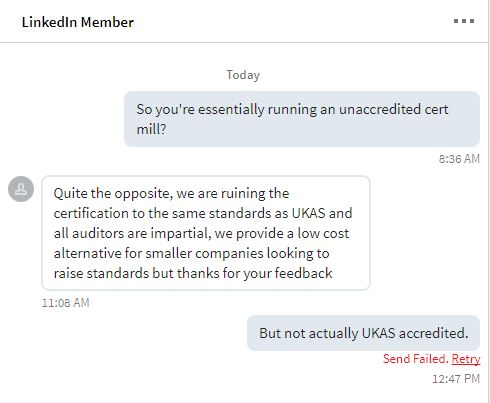 Right after that, of course, he blocked me on LinkedIn (thus the retry failure message indicated.) It’s also hilarious that his spelling error indicated he’s “ruining” certification, rather than “running” it — I’ll chalk that one up to Freud.

Willetts came to my attention when he began spamming our ISO 9001 Users Facebook Group, claiming he offered certification to “over 30 countries.” Riighhhttt…. 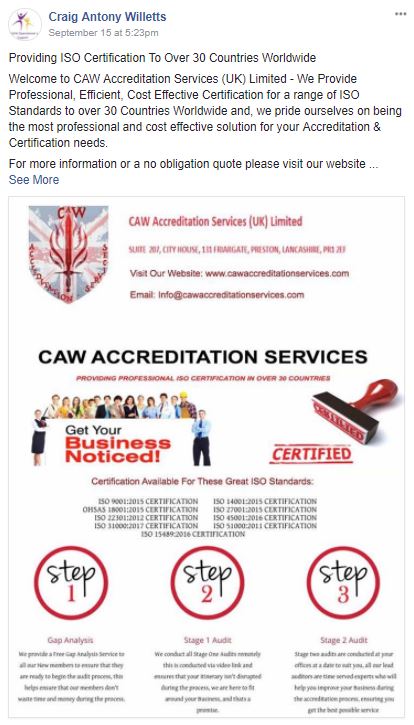 Apparently, a mandatory personal quirk of any certificate mill operator is  a total lack of self-awareness and narcissistic obsession with one’s self. The mill operators always grant themselves awards, mention their own name in weird places, and make bold claims about their personal expertise that defy all belief. American Global Systems’ Stephen Kenneally slathers his name on the side of race cars; G-PMC’s Daryl Guberman makes fake videos of jets with his name on the side, and then mentions his own name at least eight times in each of his emails. Willetts not only ensures his name is all over each of his companies, oblivious to the fact that this loudly screams conflict of interest, he then claims to have won the CV Magazine “Management Consultant of the Month 2017” award, which is really, really freaking strange. First, who knew you could win a monthly award for all of 2017? And notice the graphic: Willets not only got an award, he won the entire country of United Kingdom! Astounding! 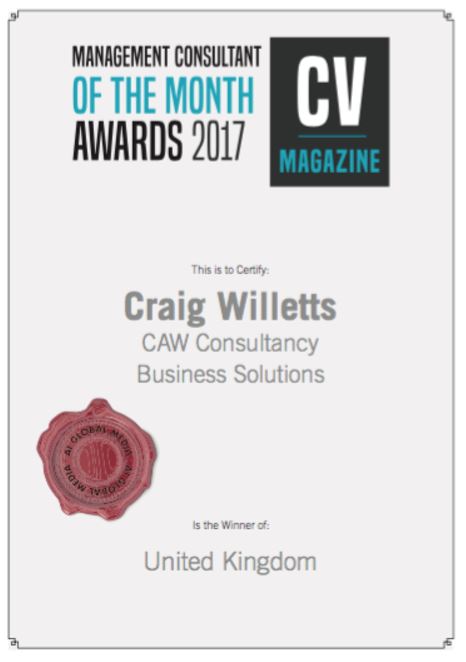 (I’ve reached out to CV Magazine, but they haven’t replied. But it seems they are a dubious publisher that issues these awards to anyone who nominates themselves, and then tries to sell marketing packages to the suckers afterwards. See here.)

This seems to point to a consistent psychology at play with the various mill operators: they have inflated egos which are not matched by their actual abilities, forcing them to feign authority rather than actually achieve it. They can’t muster up the smarts or money to actually form a legitimate certification body, so they create a website that pretends they formed one instead. They are also terrified of any actual independent oversight, afraid their sham will be exposed, so they resist any outside accreditation as if it were a virus. Armed with fancy graphics, they dupe a few dummy companies into believing their hype, which reinforces their fabricated sense of success and allows them to publish “testimonials” (often without the knowledge of the clients), thus potentially duping even more. When challenged, they respond with a nearly-scripted argument that IAF accreditation is corrupt and how ISO “doesn’t require it,” and then they go about selling you on their own deeply conflicted, corrupt scheme. As I always say, the certificate mills want you to get your corruption wholesale.

What’s likely to happen next is that, like Guberman’s “ABAC” and Kenneally’s “AIAO-BAR,” Willetts will next create his own accreditation body, and slather those logos on his fake certificates to trick people into thinking he’s independent. Most people won’t fall for it, but some will, and that’s all he needs. Without actual accreditation, these companies’ main operating costs are websites and flyers; not exactly expensive stuff. They only need a few suckers to allow them to turn a tiny profit each year.

So, let it be said clearly: Craig Willetts is operating an unaccredited ISO certificate mill. Until he gets independently accredited, this is exactly what he’s doing, and no amount of lying about it will escape that fact.

Let’s just hope that as the “winner” of the entire United Kingdom, Willetts is a firm but fair ruler.