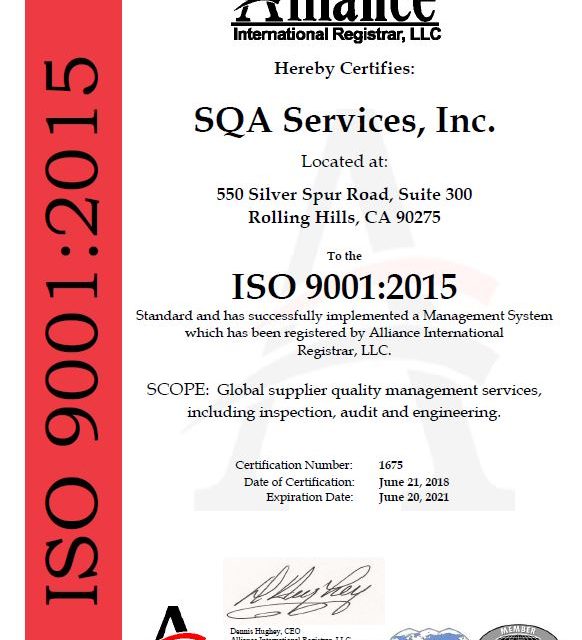 While the aerospace news media focuses on a scandal involving a SpaceX subcontractor alleged to have forged critical inspection data, a related problem looms nearby and may call into question the evidence in the criminal case.

James Smalley of PMI Industries was arrested and is undergoing trial for allegedly having forged inspection results for parts later sold to SpaceX for its Falcon 9 rockets. The scandal was uncovered when SpaceX hired Rolling Hills CA firm SQA Services to conduct an audit of PMI. SQA provides contract source inspection services to SpaceX, and its evidence has been entered as evidence in Smalley’s criminal trial. 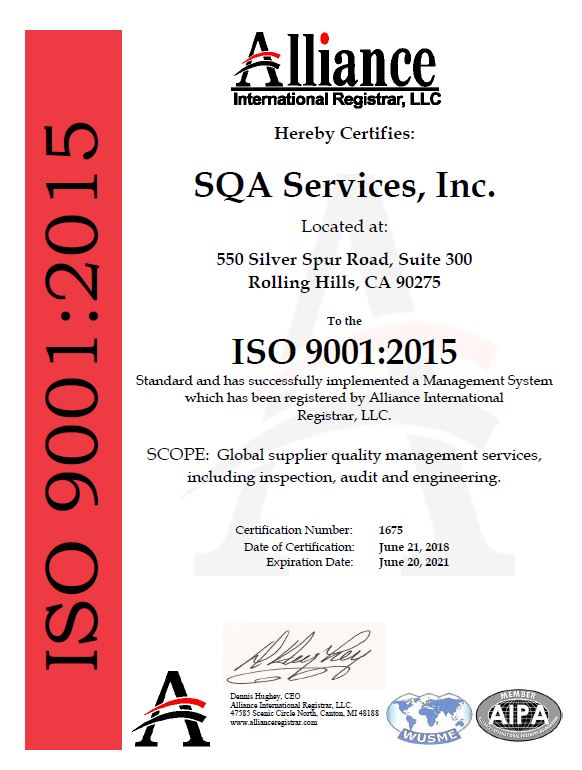 Oxebridge has now learned that SQA Services holds ISO 9001 issued by a self-accredited registrar and its credentials are thus in question. According to its website, SQA is certified to the quality management system standard ISO 9001 by “Alliance International Registrar LLC” (AIR) of Canton MI. The ISO 9001 certificate issued by AIR to SQA includes two official-looking logos where accreditation marks would normally belong. One of those marks is for the “Alliance International Partners Association” (AIPA) and the other is for the “World Union of Small and Medium Enterprises” (WUSME).

A Michigan business listing search found that “Alliance International Partners Association” is simply an assumed business name for Alliance International Registrar, meaning they are the same company, and that AIR accredited itself. The assumed name for AIPA was registered by Dennis Hughey, whose signature appears on the ISO 9001 certificate issued to SQA Services, as AIR’s CEO.

The AIR website also claims accreditation by another organization, WUSME, a non-governmental organization based in Italy which does not provide accreditation at all. Hughey is a Vice-Chair of a single “consultative body” within the WUSME, which also does not appear to provide any accreditation-related services.

Meanwhile, the AIPA logo appearing on Alliance International Registrar’s certificates is nearly identical to that of the IAF, a likely intentional branding effort which may run afoul of US trademark law. According to official US Patent and Trademark Office filings, IAF registered its logo in 2007; there are no registrations at all for AIPA. To date, IAF has taken no legal action against AIPA to enforce its trademark.

It is possible that SQA Services was not aware that AIR is self-accredited, but it would mean that SQA never performed due diligence when selecting its ISO 9001 registrar. That point is problematic given that SQA Services markets itself as a “subject matter expert” in the ISO 9001 and AS9100 arena, offering contract 2nd party audits against those standards. (See update below.)

At the same time, the revelation means that SpaceX failed to properly vet the ISO certification status of a key supplier which it then uses to validate other suppliers, injecting risk into the company’s entire supply chain. Furthermore, this could raise doubts as to the validity of the work done by SQA in the James Smalley case, putting the prosecution’s case at risk.

Smalley’s employer, PMI Industries of Rochester NY, was certified to AS9100 by accredited registrar NSF-ISR, but was shut down after Smalley’s arrest.

Representatives from SQA, AIR, WUSME and SpaceX were contacted for this article but did not immediately reply.

[Disclosure statement: Oxebridge worked with SpaceX between 2005 and 2014, but no longer has any role with the company or its QMS.]

UPDATE 25 June 2019:  A representative from SQA Services has confirmed that they were unaware of Alliance’s accreditation status.