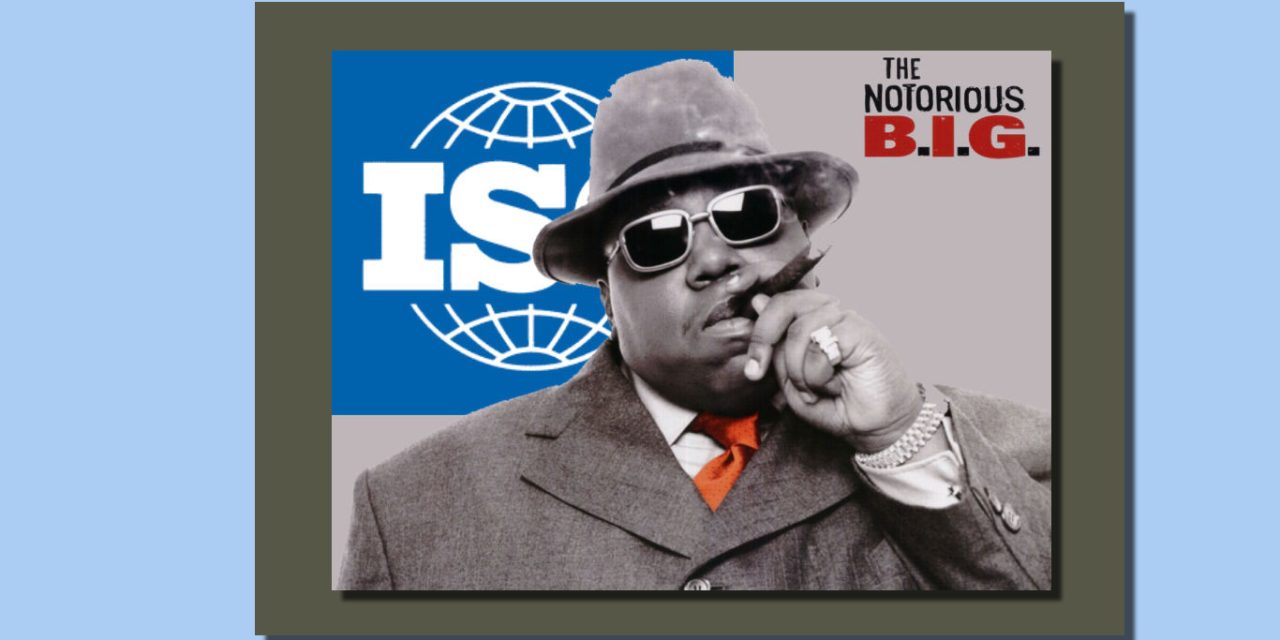 You may recall that back in 2017, ISO formed the “ISO 9001 Brand Integrity Group” in response to declining sales of the ISO 9001 standard and increasing scandals related to ISO certified companies and their certification bodies. ISO handed initial control of the “BIG” to gadfly Nigel Croft, the architect of “risk-based thinking” and permanent fixture at ISO 9001-related committee meetings.

The BIG was mandated to try to develop ways to repair the image of ISO 9001, but was doomed from the start. With Croft at the helm, the group was immediately populated by the usual ISO toadies, including Paul Simpson, Sheronda Jeffries, Leo Stuehler, and Mark Braham. We are supposed to believe that the selection of Croft-friendly sycophants was a happy accident.  Simpson, for example, was handed the role of Chair of  ISO TC 176 Subcommittee 2, which oversees the drafting of the ISO 9001 text, a position formerly held by Croft himself. It’s said that Croft put Simpson in that role, so that he could continue to hold influence.

The BIG immediately refused all outside input on what, exactly, is wrong with ISO 9001. Because so many of its members came from accreditated certification bodies (CBs), and had personally worked on the ISO 9001:2015 standard, it refused to address the two obvious problems facing ISO 9001 “brand integrity”: the fact that the text of ISO 9001 has become a complicated, make-work project for consultants, and the willingness of CBs to grant certificates to anyone, no matter their level of compliance.

With these two issues removed from the discussions outright, the BIG quickly ran aground, but not before giving multiple opportunities for its (nearly all-white) members to travel the world and attend meetings in far-flung, tropical locals. This practice is common for all of ISO, earning it the nickname “International Sightseeing Organization,” as members get to travel on weeklong beach holidays while claiming (on their taxes) that it was a “business trip.” So it was just a foregone conclusion that the BIG would engage in the same practice. It wasn’t even an inside joke: at one Azores event, Croft branded the BIG’s roadmap as the “Blue Lagoon,” naming it after a 1980’s softcore porn film starring a 14-year-old Brooke Shields getting impregnated by her cousin on a tropical island.

Things didn’t improve later. I managed to get some shots of actual whiteboard discussions from one BIG meeting, and it showed a chaotic, “throw spaghetti at the wall” approach that hinted at too many poolside mojitos and a total lack of leadership. This was clearly unqualified dummies going mad with some dry-erase markers while hyped on free hotel coffee.

Because the BIG participants were never as enthusiastic about the work involved as they were the beaches, nothing got done. Now, the BIG has splintered, with most members having moved on to other committees, and without anything to show for the work. Croft — a UK citizen who married a Brazilian heiress and lived in Brazil for a time — is still using his influence to gain access to various other committees, still claiming to represent Brazil, even though he now lives in Portugal. (It’s not clear why the UK won’t have him.) Simpson has taken up his work on forcing a revision to ISO 9001 despite multiple, official world votes telling ISO to retain the standard as-is. Jeffries left the BIG because she had been representing the IAF, which unceremoniously cut her from its own “Industry Advisory Council.” Many of the rest are in the wind.

And so another make-work project for a set of unqualified rentseekers comes to an end without any material deliverables or results, other than a few suntans and hangovers. This has left some nations with the goal of trying to figure out how to fix ISO 9001 at their own national level, but without much hope.

Meanwhile, an entirely different gang of consultants launched ISO 20671, an official standard on “brand evaluation,” but which ISO couldn’t be bothered to use for itself. No wonder: the 3-page standard was padded to 22 pages (including multiple blank pages) to justify a $60 cover price.

As I’ve written for over twenty years, the fixes for ISO 9001 are twofold. First, TC 176 must purge itself of conflicted private consultants, who seek to make the standard as complicated as possible in order to sell books and seminars afterward. Next, the IAF must enforce the rules of ISO accreditation standards or disband, and be replaced by an independent organization run by ISO itself. in both cases, ISO and IAF have the rules in place already to manage this, and have simply stopped enforcing them. They need only reboot.

While those are easy things to say, they are heavy lifts for ISO and the world to attempt. But whatever shiny future ISO 9001 may have will have not one iota of Nigel Croft or his gang of self-dealers in it. So until ISO can eliminate the corrupt consultants in its ranks, we can’t even have honest conversations about ISO 9001’s problems.