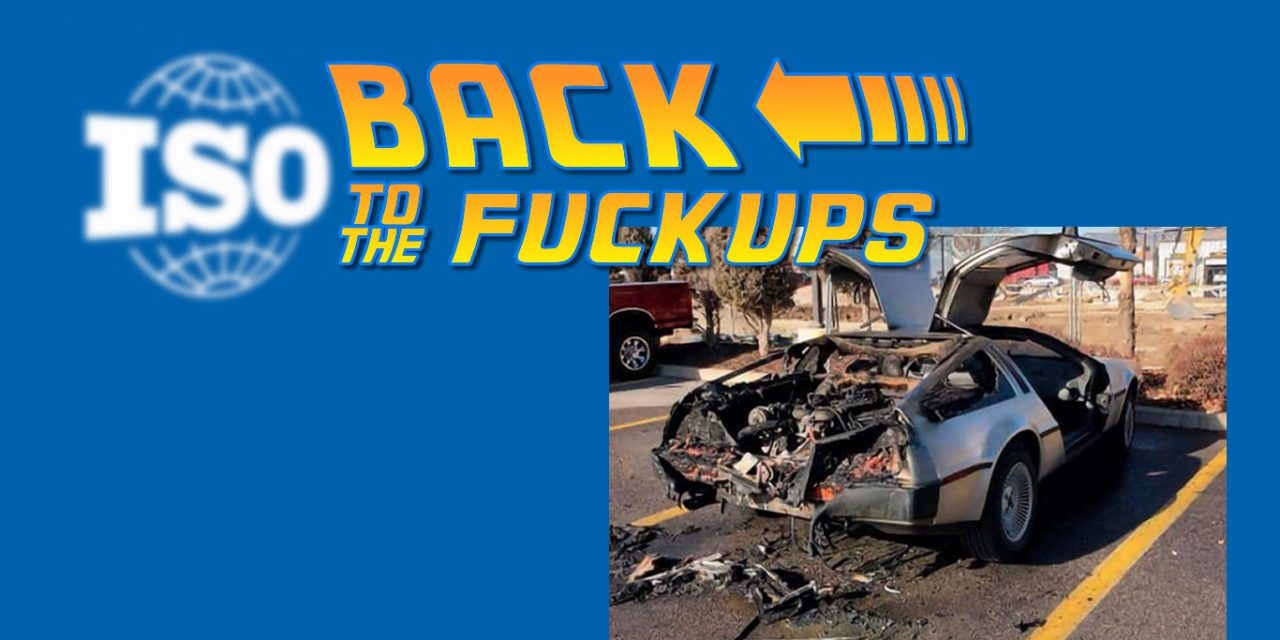 Another group of ISO functionaries you’ve never heard of, but who are dead-set on making your lives miserable, is the “ISO 9001 “Brand Integrity Group” — or, as I call them, the “Notorious B.I.G.”  This is headed up by CQI sycophant Mark Braham (taking over for ISO careerist Nigel Croft), along with fellow toady ISO TC 176/SC2 Chair Paul Simpson. This group is tasked with finding out what people think of ISO 9001, and how they can then totally ignore that advice later.

The origin of the B.I.G. came about as ISO realized — a decade too late — that ISO 9001 is dying on the vine. They realized they might finally have to listen to their own advice, as published in ISO 9001, and listen to customer complaints, analyze quality data, and take corrective action.

Then they asked Nigel Croft to handle this, and everything went into the shitter. Croft, the guy who literally doomed ISO 9001 by inventing “risk-based thinking,” was the wrong man for the job from the start. With no demonstrable actual quality experience under his belt, Croft has ingratiated himself with the right people in Geneva so he’s constantly handed awards and committee seats, no matter how hard he tries to get them to stop by repeatedly failing. Fortunately, he quickly handed over the B.I.G. and got his hands off of the thing fairly early.

Unfortunately, he handed it to Braham, who is Croft on steroids, minus any intelligence. Braham is another up-and-comer, already brandishing awards from CQI for his incessant sucking-up. (Braham is yet another CQI sycophant who refuses to stand up to CEO Vince Desmond and suggest, in even the mildest terms, that he denounce racism.) Now he’s bringing that obsessive-compulsive bending over to ISO, where they are glad to have a new, fresh face ready to lavish them with endless praise. Alas, for ISO 9001 “Brand Integrity,” that means he won’t be assessing customer feedback, analyzing quality data or taking any corrective action.

To make matters worse, the IAF then sent its resident toady, Sheronda Jeffries, to represent it at the B.I.G. Jeffries has quickly become the prime mover of the group, overpowering both Braham and Simpson (according to my sources), using a combination of her saccharine (if devious) personality and the sheer authority of the IAF, the highest body in the accredited certification scheme.

So it’s no surprise, then, that the primary concern for the B.I.G. has shifted from improving the ISO 9001 standard to tweaking how people view it, while providing cover for certification bodies. The official minutes of the TC 176 plenary session in Barbados in December of 2019 included an image of various B.I.G. notes labeled as “Survey” results. These were not survey results, though, so the minutes are just outright lying. Instead, they are photos of actual whiteboard notes from various prior B.I.G meetings, complete with dates of the meetings they were taken from. The images are grainy, but with some enhancing and fiddling, we can see the notes are overwhelmingly about problems from the certification body / accreditation body point of view.

(Click to enlarge, then prepare to squint a lot):

While a lot of these remain illegible, we can see that the focus of the B.I.G has been how to improve the perception of ISO 9001 certification, not the actual standard itself. This means they don’t intend at all on fixing ISO 9001, but instead devising new ways to pull the wool over the public’s eyes later when it sucks.

This makes sense given Jeffries and the IAF having effectively taken over this effort. Remember, the IAF represents the certification bodies and accreditation bodies, and that’s who pays them; they don’t view users of ISO standards as an interested party. Then, Jeffries (who also works for ANAB, if you’re counting) takes liberties with words to the point of spinning them in disturbingly Orwellian fashion. She heads up the IAF’s “User Advisory Committee,” an organization with a warm-and-fuzzy name, but which Jeffries interprets to mean the opposite of what it sounds like. Under Jeffries, the UAC isn’t intended to take the advice of users, but to advise them of IAF’s predetermined positions. She is all about one-way, top-down command culture, and not one to suffer customer feedback, no matter what.

So this is why the Brand Integrity Group won’t be targeting practical fixes to ISO 9001, but instead ways to manipulate how you idiot, unwashed users think about it.

Next, we know that Simpson and Braham and Jeffries and the rest are all cowards, terrified to even suggest to the ISO mothership that its baby is ugly, and instead worried about their own personal career advancement. They most specifically will not engage with stakeholders, and they go wildly out of their way to avoid dealing with actual criticism of their work, even when that criticism is supported by massive data dumps issued by ISO itself.

This slide in particular is damning, taken from an April 2019 B.I.G. meeting. Notice the focus is almost entirely on improving the perception of CB certifications, and not anything to do with improving ISO 9001 for the people who have to buy it: 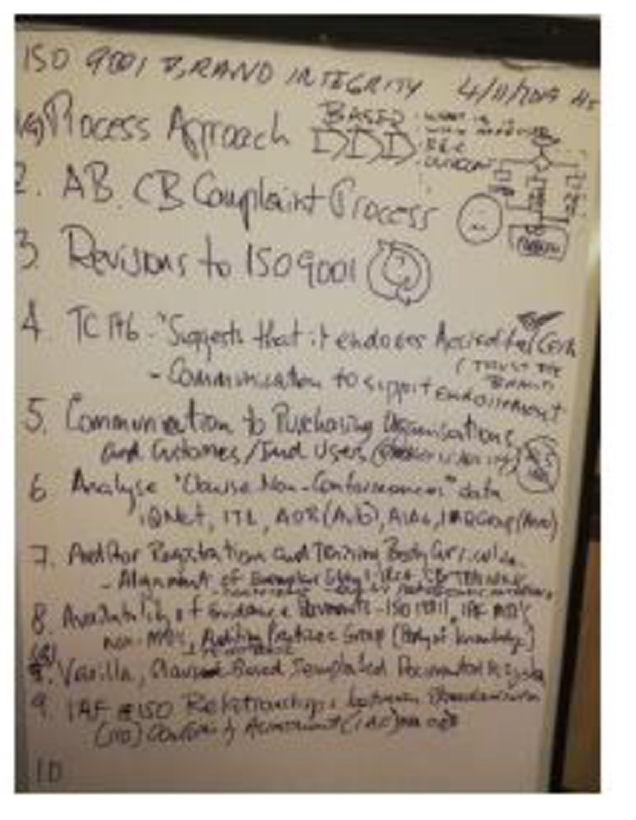 Parsing the list as best I can, here is what I come up with as their points of focus:

The push to get ISO to formally back IAF is also disturbing. The IAF, knowing it’s influence is dying under the weight of massive corruption and international scandals, is looking to have Mommy band-aid it’s boo-boo.  ISO, meanwhile, only wants to influence and control the certification scheme from the outside, so it can maintain plausible deniability when bad things happen like… well, I don’t know… these 90 scandals. The IAF could be working to enforce accreditation rules on its member bodies like it’s legally required to do, but instead, it’s trying to get ISO to protect its “brand” through public endorsements.

Also, examine that list to see the “stakeholders” that Braham’s group are most concerned with: CBs, ABs, the IAF, TC 176 itself, IQNet and various registrar groups like IAAR, trainers like Exemplar, and.. oh, the IAF a few more times. Nowhere in that group is anything having to do with the people who buy standards or certification audits: the users. They are not worth considering.

Now look at this next slide, presenting a photo of the … erm, minuscule team of “world experts” and their credentials. 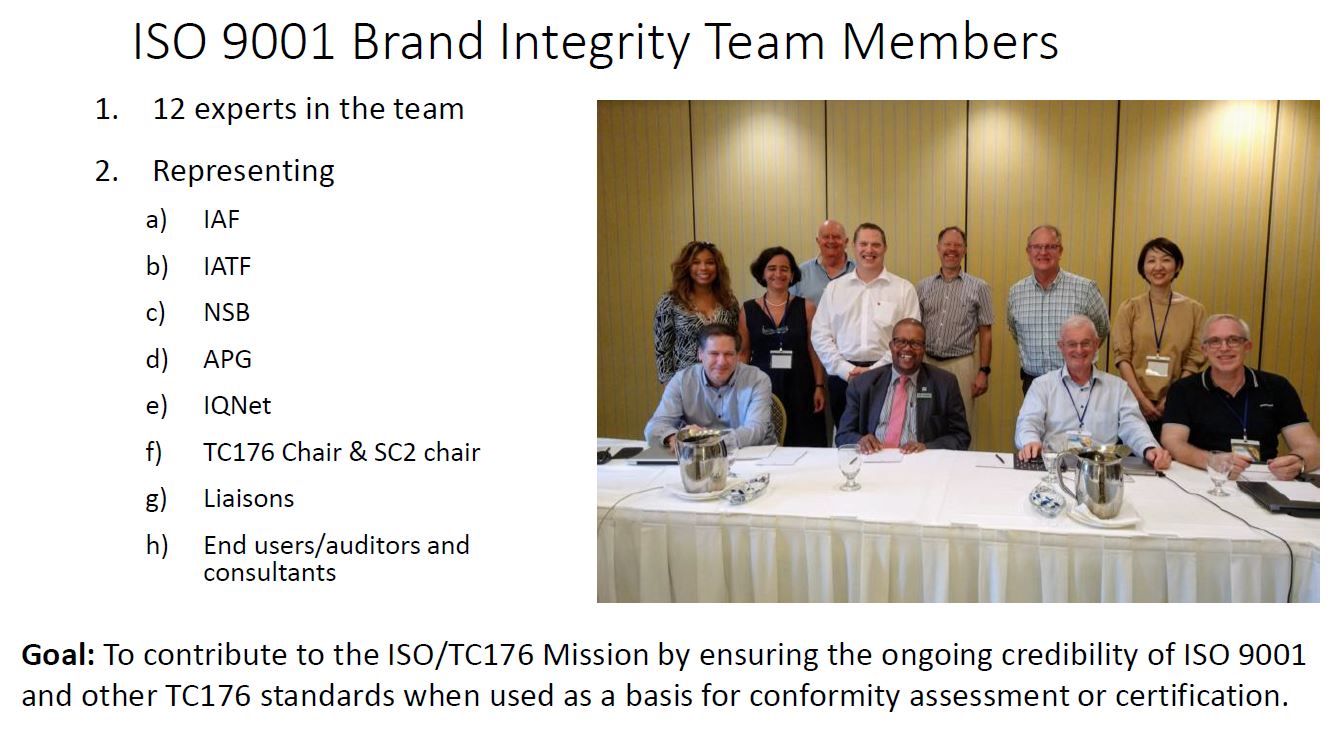 So far, I have been able to identify the following people in that photo (and will be grateful if anyone can fill in the blanks):

I want you to remember those faces, too, because in a few years I will be writing an “I told you so” column, after the new standard fails even more than ISO 9001:2015 did/ These are the people who will be directly responsible for that. We can then compare their disastrous results with how many awards ISO and IAF and ASQ and CQI gave them in the interim, which will be hilarious.

If that doesn’t hammer home their skewed focus, try this next slide. The inept slide formatting comes from the original (I didn’t tinker with it), which means we are taking advice on world standards from some idiots who don’t know how to adjust font size in PowerPoint. 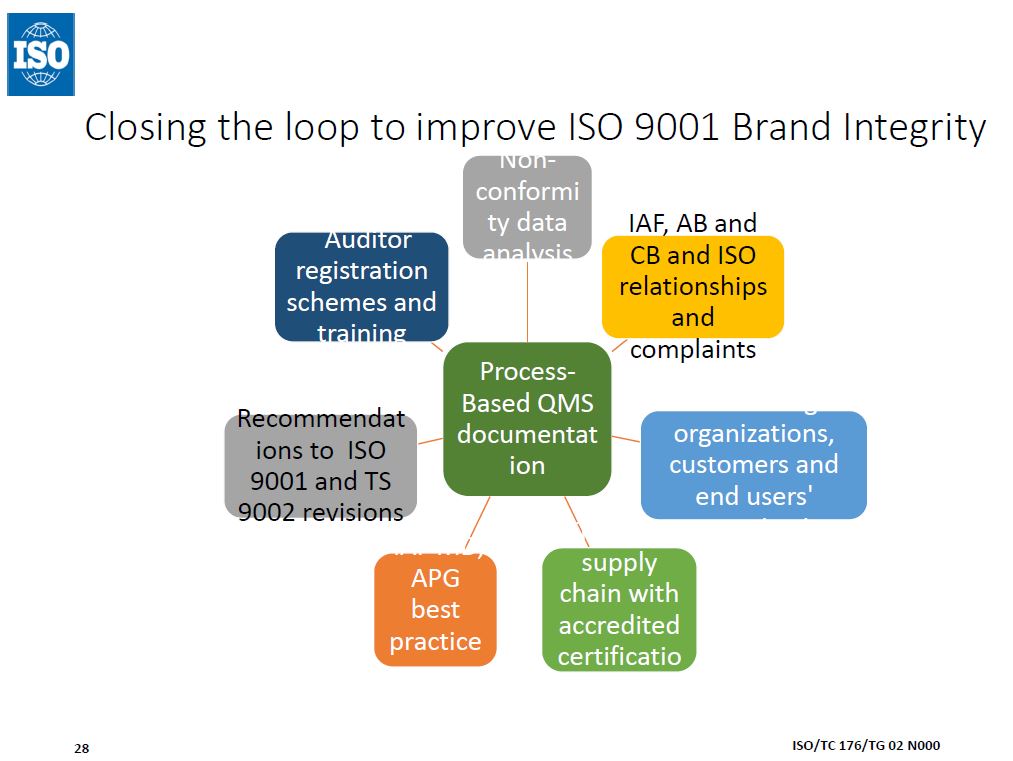 Waiter, I’ll have what Mark Braham is smoking, please.

Again, all of these concepts and focus points are related to improving ISO 9001 in order to get registrars off the hook for their decades of disastrous and corrupt performance. If users had been in the room, the conversation would have gone in an entirely different direction. Something like this simple, three-point list:

But that’s not what they’ve come up with. After a number of B.I.G. meetings in beachy tourist traps like the Azores and Barbados (Simpson gotta tan), the geniuses have come up with this manifesto as their best attempt at a cohesive mission plan: 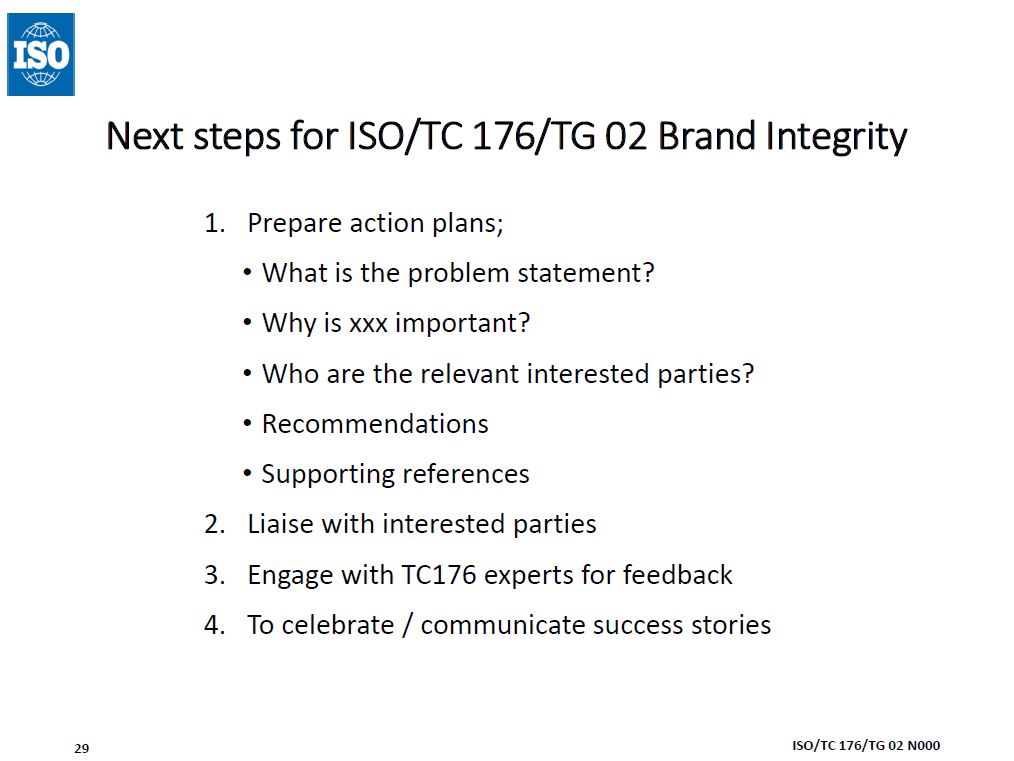 Notice how that list reads like something you’d develop before you held a meeting, not after you’ve allegedly held a number of them, and are already well underway with your work.

It’s just stunning how bad these people are at their jobs.

And remember the power they have: ISO 9001 will be mandated by major companies to their supply chain, forcing user organizations to adopt whatever harebrained schemes they come up with. This will cost companies a small fortune, none of which any of these geniuses will have to pay for.

This has been, so far, years of work by the B.I.G.  Meanwhile, go back and look at how the Oxebridge Q001 standard and certification program — which was cooked up in a few weeks — fixes nearly every single problem the B.I.G. is trying to fix.

Will ISO “liaise” with an interested party like Oxebridge to see what we learned? How we fixed these problems? How we managed to improve ISO 9001 — to great and nearly viral success so far — as well as the certification scheme? How we cracked the case on blockchain-enabled central certification registries, or conducting remote audits while maintaining security protocols? How we’ve nearly eliminated auditor conflicts of interest?

Don’t bet on it. Simpson is already being really specific about who is not invited to his party:

So what they really mean is that they will “liaise” with themselves. You users of ISO 9001 can go stuff it.

I thought the signs on the wall were bad when these same people were developing the last version, ISO 9001:2015. I could not have guessed just how things would worsen.

If you’re frustrated, here are the people to write to:

They won’t listen, but you might feel better after hitting “send.”