ANAB: You Can Lose Your ISO or AS Certification If You Don’t Promote Your CB 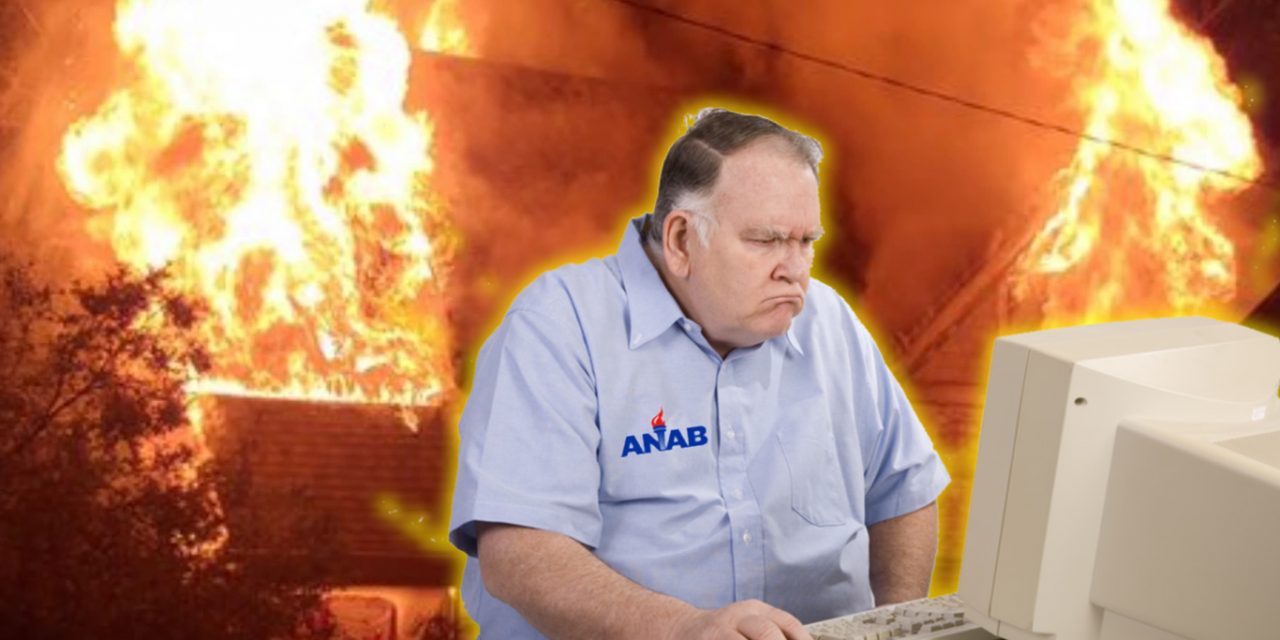 Get ready for another example of just how broken the ISO certification scheme is, and the monumental incompetence of ANAB, one of the world’s leading accreditation bodies.

In the past four or five weeks, four Oxebridge clients all received audit nonconformities written against their websites. It seems ANAB is on a tear about something it thinks it can manage — like client websites — rather than the stuff it can’t, like widespread abuse and corruption by the certification bodies. No surprises there.

Every year ANAB issues a new set of rulings to help “improve” the ISO certification scheme. Often these are just warmed-over versions of their decades-long attempt to insist “outputs matter” and that certs shouldn’t be granted to companies that don’t actually comply with the standards. The moves are always undermined by ANAB itself, which then refuses to enforce accreditation rules on bad-acting CBs, since those CBs pay ANAB. So ANAB’s moves are always theatrical, with no actual intent to improve anything.

Now remember that there has always been a set of rules on how certified organizations can use the logos of their certification body (CB) and that of ANAB itself. If we go all the way back to ISO Guide 62 from 1996, which was the standard that pre-dated ISO 17021, we see these rules were defined back then:

The rules make sense, too, not only to prevent trademark violations. Often companies will fraudulently use a CB or ABs logo in order to appear certified when they are not. That’s illegal.

In other cases, companies try to save money by certifying a tiny department at one site of their organization, and then falsely claiming the certification applies to all of its operations around the globe. That’s fraud.

But, again, these rules have been around for decades. It’s not clear why ANAB suddenly decided this was something they’d focus on. It’s also a tacit admission they had been ignoring it for the entirety of the 1990s and 2000s. It’s likely just another attempt by ANAB to make the world think they are doing something other than cashing CB checks.

The rules demand that as part of ISO 17021 accreditation, all registrars are required to have a procedure defining the requirements for use of their marks,as well as that of their accreditation body (such as ANAB.) Those documents are then embedded by reference into a CB’s contract, making them legally enforceable on their client. The CB will typically provide high-resolution copies of the proper logo set (the CB logo next to the AB logo), with rules on how to use them.

Then, one morning someone at ANAB smoked crack, packed his suitcase, and went to work. Now they are policing the use of generic logos, too.

You’ve seen the generic “ISO 9001 Certified” or “AS9100 Certified” logos on websites everywhere. Tens of thousands of companies use them worldwide, and the practice is common. Here’s one example from the New Hampshire company Continental Cable: 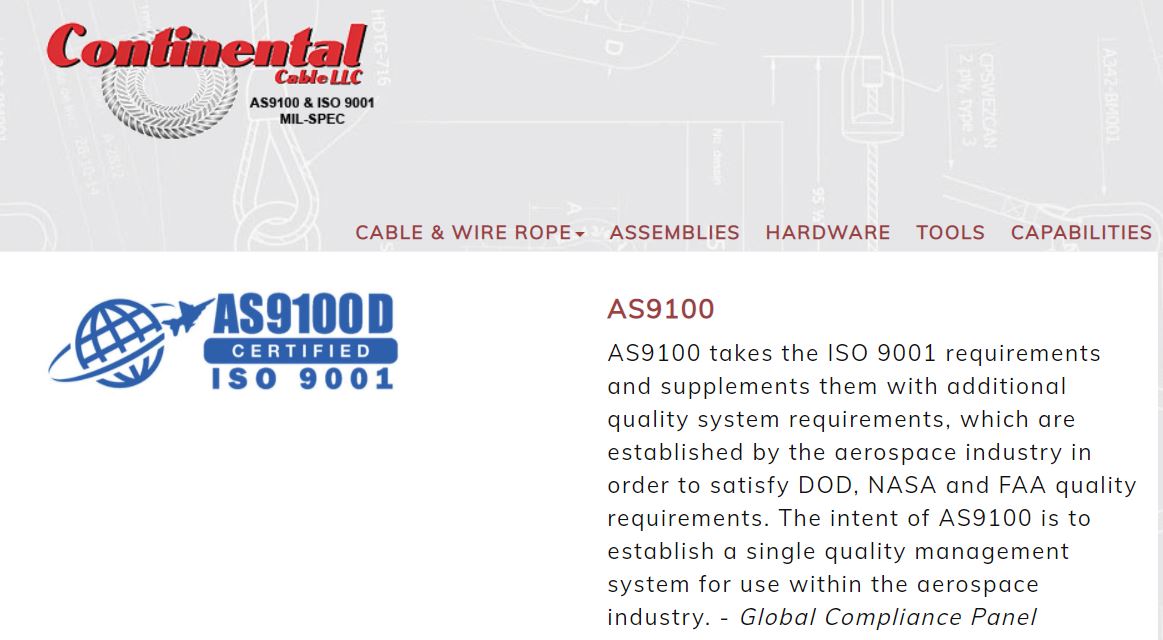 And another from Midwest Prototyping in Wisconsin: 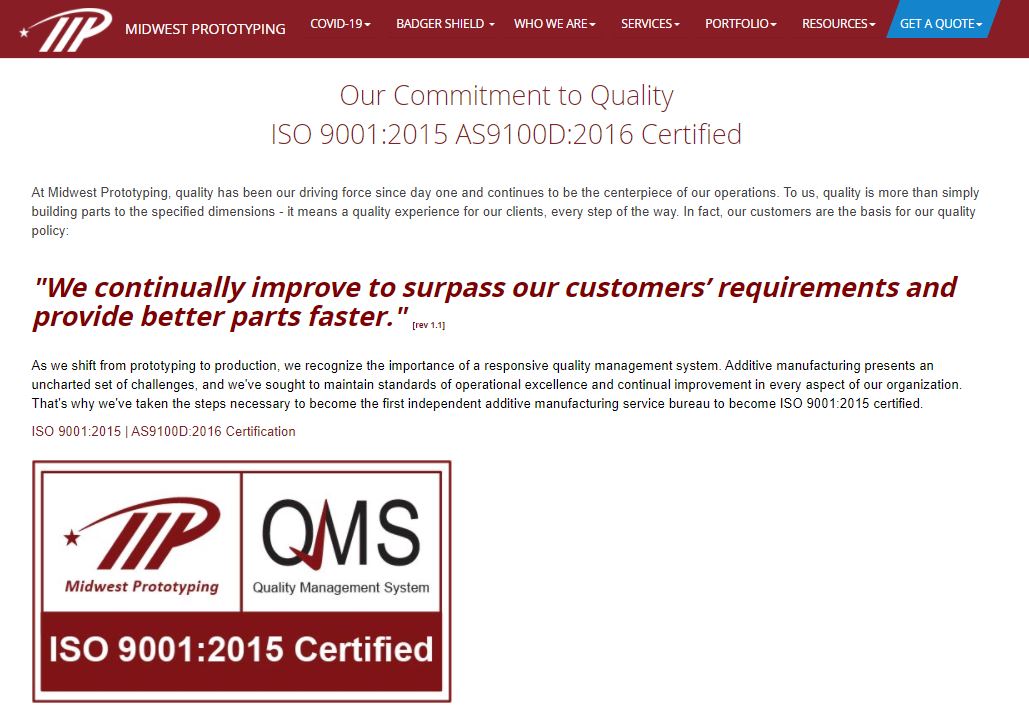 Now, in both cases the companies hold legitimate, accredited certifications. There is nothing at all wrong with their use of the generic logos, and nothing whatsoever misleading about them. These are honest companies marketing themselves in an honest manner, using entirely-legal, copyright-free logos available to anyone on the planet.

But ANAB’s not having it.

Recently a client reported that ISOQAR Inc. (the US one, not the UK dimwits) wrote them up with a minor AS9100 nonconformity over their website which included a generic “AS9100 Certified” graphic, with no mention of ISOQAR or ANAB whatsoever. Apparently predicting a complaint, the ISOQAR auditor provided a copy of ISOQAR’s official procedure on the use of its marks, which included this paragraph, in red text:

This is absolutely bonkers, so let’s quickly unpack it.

Now, a CB can write an aerospace nonconformity — which, if not addressed properly, can escalate to a major and eventually cause a client to lose their AS9100 certification entirely — just because they didn’t provide free marketing for the CB itself. Left as it is, that amounts to a violation of US tort law (interference in business, third party intrusion in contracts, and a host of other things), and thus exposes the CB to litigation.

Ignoring that, it reveals the lopsided set of priorities that CBs and ABs have when overseeing a critical industry that manufactures airplanes, aircraft and spacecraft systems, and defense articles.

There are a million reasons why a client may opt not to use the official CB logo on its website. For one, maybe it doesn’t want to help market the CB and expand their business; maybe it really doesn’t like its CB and merely tolerates it. For another, maybe the client has a set of ISO certifications, covered by a host of different CBs, and can’t possibly list all the CBs and their certificate numbers every time they mention “AS9100” or “ISO 9001” in passing. Maybe it’s an aesthetic thing, and the use of the CB logo — many of which look like burned trash anyway — would hurt the company’s branding. Who knows?

But sure enough, my client had to write a formal corrective action, do root cause analysis, then update their website so the generic AS9100 logo included the ISOQAR name and cert number. Then they had to screenshot that, enter it all into OASIS, because if they didn’t do that, an airplane might fall out of the sky and kill everyone.

Quick hint: the number of airplanes that have fallen out of the sky because a company didn’t market their CB is ZERO.

When I asked ISOQAR about it, they admitted that this change was made in 2019 as a result of an ANAB witness audit finding.  ISOQAR then updated its procedure to match. I checked, and sure enough, the 2016 version of their procedure on the use of marks did not have the text, and the 2019 version did.

So I wrote to ANAB’s Lori Gillespie. Readers of this site know where this goes.

Gillespie is a master-class bureaucrat. She has no creative thinking process at all, and is a slave to “procedures.” Like any dysfunctional bureaucrat, she can only communicate by quoting procedures, and — like the computer that blows up when Captain Kirk asks it a contradictory question — sputters when one procedure conflicts with another. Lori Gillespie is the human embodiment of everything wrong with ISO accreditation bodies: they will overlook huge caches of evidence of outright fraud and corruption, while focusing on whether or not someone used the right font for their page numbers, or if their pencils and paperclips are organized alphabetically.

So sure enough, this is what Gillespie wrote back.

As I am sure you know, the requirements for marketing certification and use of the certification mark are in ISO/IEC 17021-1 which then requires the CB to provide their policy to their clients.  We have seen, in some cases, certification bodies do go above and beyond what is required, which would be acceptable assuming it does not violate the requirements.

ISO also has marketing rules, but based on my review there are not any for AS9100 and ANAB does not require additional rules for marketing certifications.

I especially love that Gillespie thinks she needs to remind me of ANAB’s complaints procedures, since I have filed more complaints against ANAB than probably anyone, and am constantly quoting their procedures back to them. 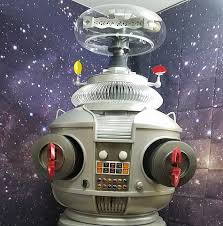 Gillespie ignored entirely my point that ISOQAR’s finding comes from an ANAB witness auditor, and that ANAB has the records of this finding in Gillespie’s office right now. But Gillespie can’t be bothered to check those records, and instead quotes a “procedure.”

She then throws the CB under the bus, by implying they went “above and beyond.” That’s a lie. ISOQAR did this because an ANAB witness auditor — probably Vince May, who seems obsessed with websites — wrote them up for not doing it. Then ISOQAR submitted a formal response to the ANAB nonconformity, did root cause analysis, updated their procedure, and had the whole thing approved by ANAB in order to close the finding. Gillespie pretends that didn’t happen.

Then, Gillespie quotes ISO procedures to govern the use of the AS9100 mark, which ISO has nothing to do with. The AS9100 scheme is overseen by IAQG and SAE, not ISO. But, again: Captain Kirk and the “Does Not Compute Conundrum.”

So while ANAB is out policing your websites and threatening to take away your aerospace certification if you don’t promote your CB, here are some things they could be doing:

ANAB should be worrying about corrupt CBs who threaten clients for using consultants who hold them accountable to accreditation rules. ANAB doesn’t.

ANAB should be worrying about how its mark is associated with an increasing number of companies found to have killed people due to defective products. It doesn’t.

ANAB should be worrying about it’s losing market share to a competitor using low-paid Indian labor. It’s not.

ANAB should be worried that the DOD Inspector General found dozens of major nonconformities at AS9100 certified companies, and those companies retained their certification anyway because the CBs involved just ignored them, putting human lives at risk. It’s not.

Instead, ANAB is auditing clients’ websites. This is the pinnacle of their auditors’ technical abilities. Websites.

So now I will be working to have ANAB’s ruling reversed, if I can get them to even admit it exists. If your company was cited with a nonconformity related to generic logo usage, contact me so I can collect this data. (You won’t be mentioned in any filings unless you grant permission.)