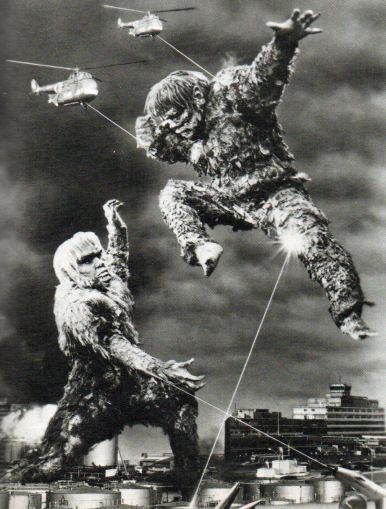 Our industry is plagued with idiots and morons, but they only rarely get into a cage match and fight each other. So it’s fairly awesome to be able to find a head-to-head bout between certificate mill operator Daryl Guberman and IAQG dunce-in-residence and former Lockheed Martin theater usher Buddy Cressionnie. One thing you can be sure of, when they go “head to head” it’s going to sound a lot like clacking two empty coconuts together.

Guberman apparently approached Cressionnie back in June of 2013, attempting to weasel his way into the AS9100 certification scheme, but Buddy was having none of it, and made the foolish decision to actually answer Guberman in writing. This led Guberman to launch into a 20-page rant against certifications, but which also includes (for some reason) a pretty damning takedown of QAS International, Guberman’s competition in the unaccredited certificate mill scheme arena.

The whole thing is like watching a Zone Fighter episode of Godzilla fighting a rubber mushroom monster, and is pretty hilarious.