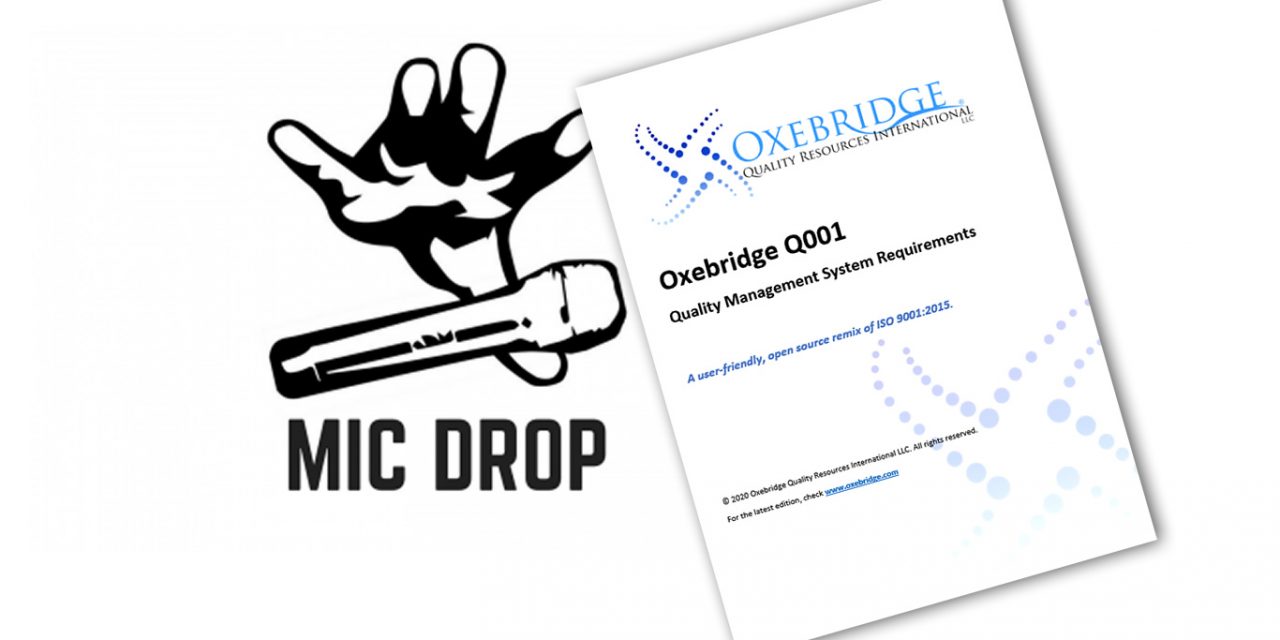 In 2000, I dropped the mic on the consulting industry by introducing Rapid 40-Day ISO 9001 Implementation, robbing consultants of their false claims that ISO 9001 has to take a year or more to put in place.

In 2005, I plopped down another microphone, releasing the world’s first parody standard, Eyesore 9000, causing a lot of TC 176’ers to mutter profanities under their breath. I followed that up with 2012’s DumbAS9100.

In 2015, I dropped the mic again, releasing the Oxebridge Totally Free ISO 9001:2015 QMS Documentation Template Kit, and ruining the party for all those clowns selling lame template kits for $500 – $5,000 a pop.

Two years later I did the same for the aerospace industry, releasing the equally-free AS9100 QMS Documentation Template Kit on the world.

Now comes 2020, just over two decades since Oxebridge’s founding, and you thought I was running out of mics to drop. Of course that wasn’t true. 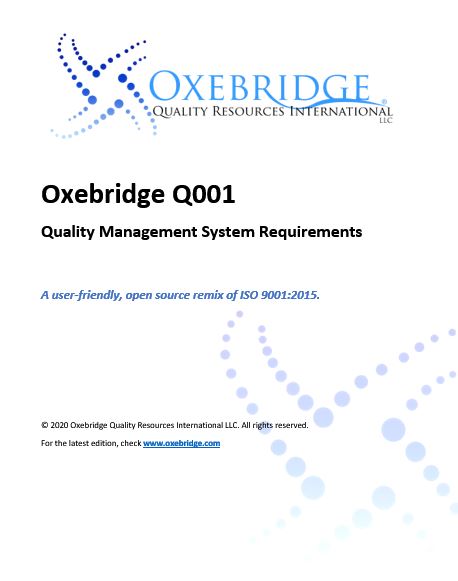 I’m happy to announce the release of an initial draft of Oxebridge Q001, — pronounced “Q Thousand and One” — a “remix” of ISO 9001. It follows only ISO 9001’s rough clause structure, but then rewords the entire thing so it’s more easily understood, and (better yet) more easily implemented and audited.

All those whining TC 176’ers have been griping about my criticism of ISO 9001 over the years, and some have suggested that they know better because only they can write ISO 9001. Banned from the technical committee meetings, they certainly had me over a barrel. So I just took the fucking barrel and hit them over the head with it.

Yes, I made my own goddamn standard, thank you very much. And I hate to blow my own horn, but damn, it’s better than their complex mess.

Here’s what Oxebridge Q001 does:

The great thing is that it doesn’t use any ISO 9001 language at all, so ISO can’t sue for copyright or trademark infringement!

Following Oxebridge Q001 will get you pretty darn close to 100% compliant with ISO 9001, but I do recommend comparing it against your legally purchased, fully licensed copy of ISO 9001:2015 — available here for $180 — just to be sure.

You can download a free copy of the latest draft version of Oxebridge Q001 right now, right here. Feel free to provide feedback to me if you have ideas on how to approve this. The document will be free when released in its final form, too, so don’t get greedy and demand I pay you royalties for your suggestions. Heck, TC 176 idiots have to pay ISO to write ISO 9001, so I should technically be charging you to help me, if I wanted to follow ISO’s model.

And, hey, I spent a total of about ten hours on this. Imagine what I could do if I was on TC 176 and had eight years to develop something.