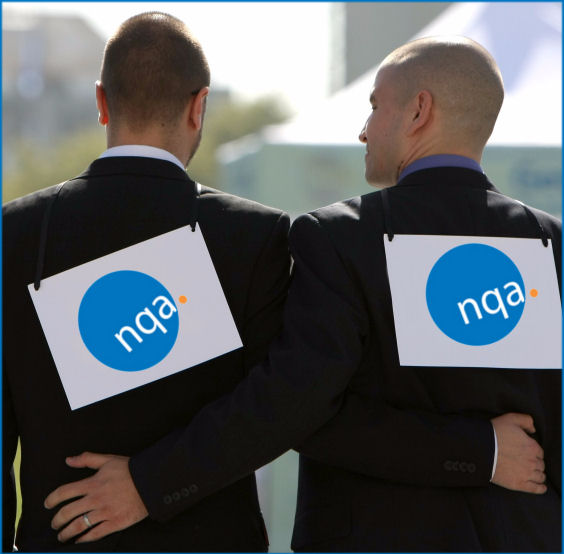 If you needed more evidence that NQA is just a set of terrible people doing terrible things, well I’m happy to provide it. Whether it’s hardgrading a client that previously had no history of issues, and suddenly slamming them with 17 major nonconformities overnight, or softgrading an audit by issuing a cert to a company that hadn’t even conducted internal audits, NQA seems hell-bent on proving their ongoing business model is something akin to utter chaos, driven by its management’s mood swings and fueled by Super Sugar Crisp and waffle syrup.

Now take a new look at NQA’s “Associate Consultant” referral program, something the two accreditation bodies UKAS and ANAB have historically refused to address, despite it being a clear violation of ISO 17021. That standard prohibits CBs like NQA from partnering with consultants, or linking marketing, so that the objectivity and trust of NQA’s certifications can be assured later on; the risk is that NQA offers benefits to partner consultants and their clients which makes the entire scheme unfair, subjective, and utterly untrustworthy. The term “associate” literally means someone working with NQA, in some capacity or another, but UKAS and ANAB don’t care so long as NQA’s checks clear.

The defense was always that NQA could claim “we’re just referring consultants,” and that was that. Technically, ISO 17021 prohibits this as well, but that rule is generally ignored, and the “no referrals” position is seen as some kind of strange violation of free speech or something. But some registrars found themselves in hot water when they went further. ISOQAR Ltd. (UK) faced public backlash after if just went all in and offered bribes to consultants who would transfer their clients to it, throwing out offers of champagne, cash-value gift certificates and more. EAGLE’s brash new business development guru found himself out of a job shortly after we reported on his attempt to create a program that only listed consultants who had delivered at least three consultants to EAGLE, clearly tying a consultant referral listing to the consultant’s ability to generate revenue for EAGLE.

NQA’s program comes dangerously close to the EAGLE fiasco, but pre-dated it. In NQA’s case, they don’t come out and say you have to deliver three clients in order to get listed, but instead say the consultant must have “specifically helped 3 or more NQA clients and received a high survey rating.” By saying this, NQA can argue that the companies might have been NQA clients first, and hired the consultant afterward when in practical reality it means exactly what the now-defunct EAGLE program was intending: consultants who award NQA with at least three contracts get listed, and those who don’t, don’t. It’s clever wordsmithing. And, of course, they don’t publish these “survey ratings,” so it’s a fair bet that a consultant who delivers three clients gets a high rating no matter what, assuming the survey even exists. (No Oxebridge client ever reported being given a consultant survey by NQA, and we have at least 50 NQA clients in our roster.)

NQA then goes on to suggest that a referral is not a recommendation. Even though it refers to the Associate Consultant program as a “unique and effective referral program,” it then says:

It is important to note that accreditation rules prohibit NQA to specifically recommend any consultant including those listed on our website.

Which is actually worse. Typically, a “recommendation” is simply name-dropping someone, but amidst a choice of others, while a “referral” implies some trust. According to the website Occasions to Savor:

Generally speaking, an introduction is when two parties are brought together by a third party for a potential mutual benefit. A recommendation is merely a suggestion and more than one option may be supplied in an attempt to solve a need. A referral is essentially sending someone you care about to someone you trust.

As if that wasn’t  bad enough, NQA gets into more trouble because their “Associate Consulting” listing merely refers users back to its own auditors, a gross conflict of interest that in any other industry the accreditors would be all over. Fortunately for CBs like NQA, we have the corrupt UKAS and ANAB overseeing these things, so nothing happens.

Take a look at a sample of who’s listed under the “Associate Consultant” program, and who is then granted the right to slather NQA’s logo on their consulting websites, all under the nose of  UKAS:

Mind you, this was just a quick search using a zip code for Florida. (Yes, their search results show out-of-state consultants anyway, so I’m not sure what’s up with that.) It’s not comprehensive at all, but we can assume there are a lot more NQA auditors listed as Associate Consultants.

Now, none of this matters much since ISO 17021 — which was written by the CBs and ABs themselves, through ISO/CASCO — allow a consultant to audit his own work anyway. (Yes, the ISO Scheme was asleep during the entire Enron / Arthur Andersen thing.) The only “rule” is that they have to wait two years before auditing their own work; a clever bit of manipulation that intends to give an air of objectivity, but falls apart when compared to the fact that certification contracts are set at three years. That means that an NQA Associate Consultant can do the implementation work, and provided that he can find a friend in NQA to do the first two audits, can then resume auditing his own work in Year Three and beyond, all with the blessing of ISO and the IAF. In the case of a “stable” like Whittington and Associates, the Whittington auditor need only pick another Whittington consultant to audit his buddy’s work, and it’s not like one NQA auditor is going to write up another one. (Except when there’s in-fighting between NQA auditors, which causes all sorts of fun, unless you’re the client.)

NQA is facing a more, umm… “in-depth” review by independent bodies, what with that damning Dept. of Defense report and all. So ANAB and UKAS would be advised to start clamping down lest they get dragged under, too.

But it’s probably too late.