Meanwhile, however, Russian Register continues to issue ISO certifications under the IAF and IQNet logos. In many cases, these certificates were made to state-run companies listed on US, EU, and other international sanctions, making certain business transactions with them illegal. Russian Register is currently accredited by IAF member accreditation bodies. The “About” page on the RR official website openly markets its ties to the IAF, and then boasts of having certified multiple sanctioned companies such as Gazprom, Rosneft and Kamaz. 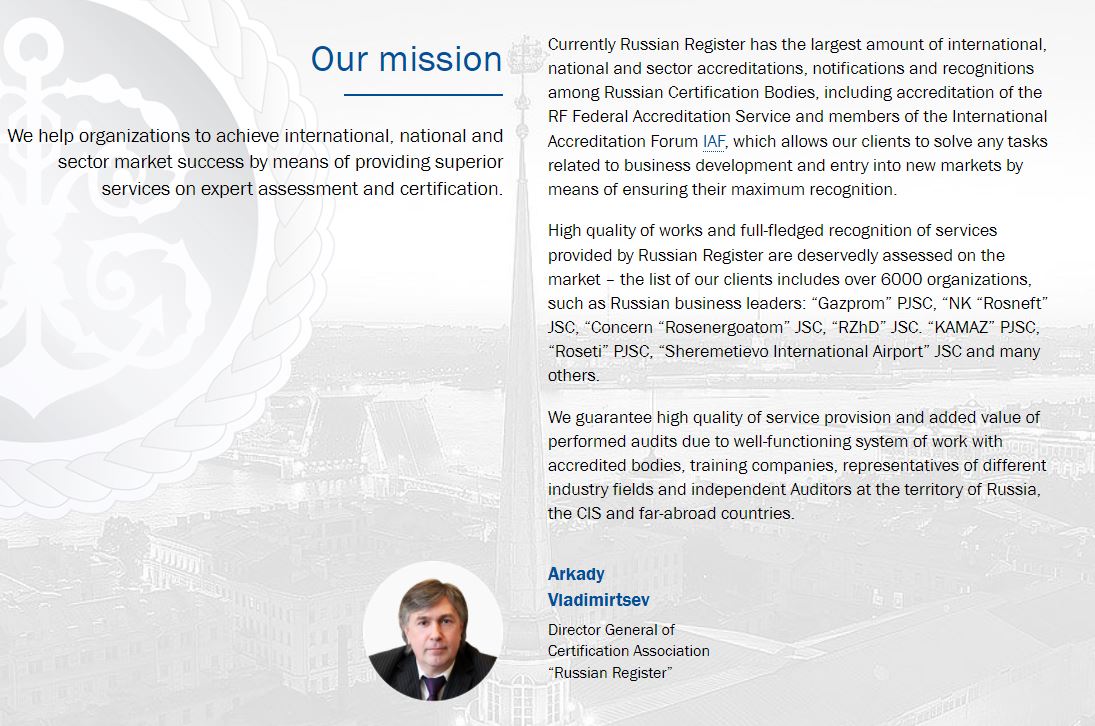 RR is not alone. “Western” certification bodies such as DQS, Bureau Veritas, Quality Austria, and TUV have all certified Russian companies while under sanctions. Each certificate issued by these bodies includes the IAF logo.

Multiple sources report that only recently the IAF has begun discussions about what to do, but is paralyzed with bureaucratic incompetence. The current IAF Chair is Italy’s Emanuele Riva who has faced a storm of controversy in his first few months, having taken over from China’s Xiao Jianhua. Whereas Xiao’s reign at the IAF was marred by adherence to Chinese Communist Party policy, Riva appears to be hindered by his inability to navigate fast-moving events, and a tendency to show blind allegiance to the accreditation bodies who pay membership dues to IAF. Riva has already refused to take action on the IAF’s role in supporting companies that engage in forced labor, such as the Top Glove factories in Asia, and the Chinese Uyghur work camps. A bungled interpretation of basic accreditation rules by Riva now makes it appear that the IAF officially recognizes practices of unaccredited, fraudulent “certificate mills” as legitimate. 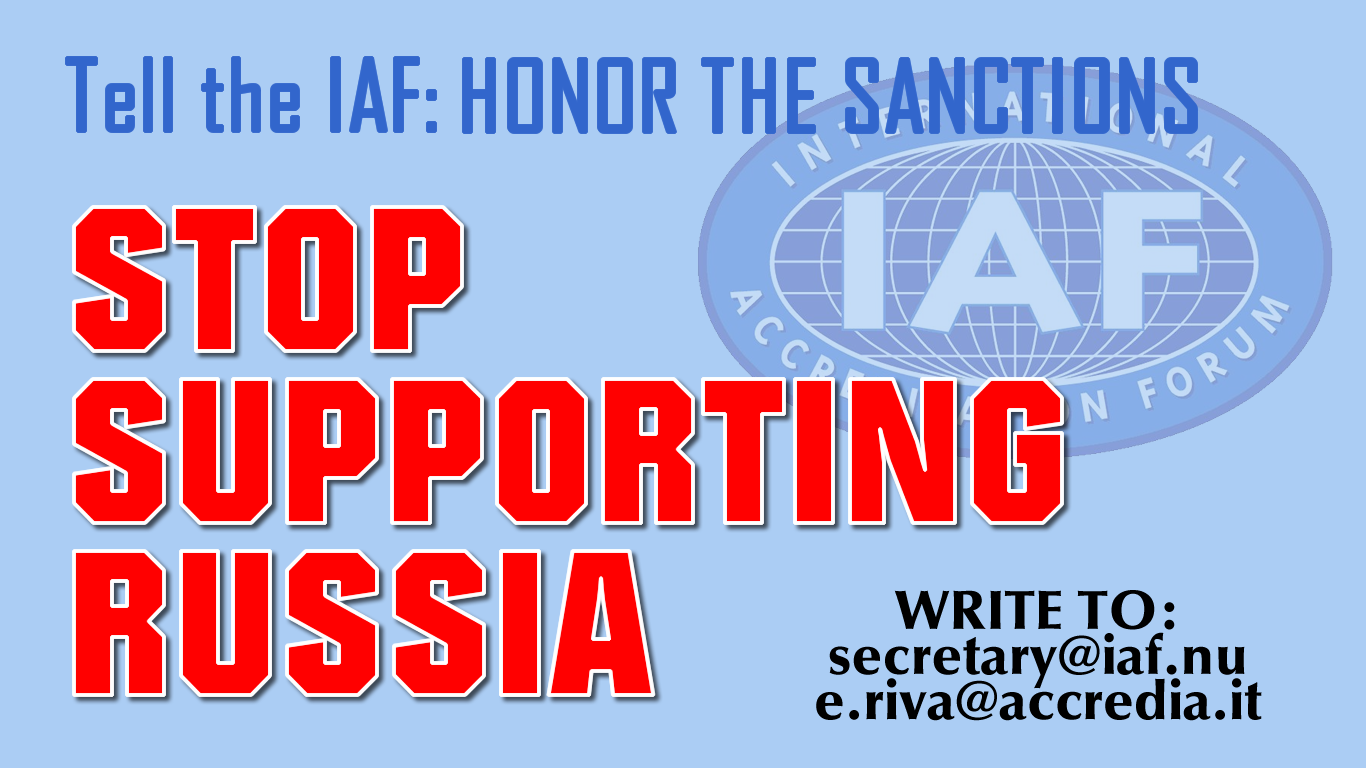 To date, organizations around the world have cut ties with Russia and its state-run companies, including the International Olympics Committee, FIFA, Apple, Adidas, Disney, Netflix, IKEA, and more.

As a result, the IAF is increasingly isolated in its support of Russia, and in allowing Russian firms to continue to use its logo as a means of legitimizing their activities.

The accreditation cabal IQNet, run by Pedro Castro Alves, has also refused to take action. IQNet charges a fee to bodies who agree to put its logo on ISO certificates, as another dubious sheen of legitimacy. IQNet and Alves aggressively pursued partners in Russia, and the IQNet logo appears on many sanctioned companies. IQNet operates out of Switzerland, but even that country has reversed its long-standing policy of “neutrality” to break from Russia.

ISO also operates out of Switzerland, and has remained silent against Russia. ISO insists it has no role in certifications to its standards, but then partners with the IAF to issue “joint communiques” that dictate major certification policies, such as transition deadlines between updated standards.

IAF has refused to take action against major complaints showing the Austrian accreditation body, Akkreditierung Austria, partnered with the sanctioned Russian firm Rostec to help promote that company, in exchange for gaining market share in Russia. AA has allowed its partner, Quality Austria, to not only certify Rostec, but then allowed Rostec to create its own competing certification body. Rostec has been under sanctions since the Russian invasion of Crimea in 2014. These sanctions were also ignored by IAF.

We have has filed a complaint against the IAF with the US Dept. of Treasury for OFAC violations. If found guilty of ignoring US sanctions, IAF officials could face 30 years in prison. The IAF is registered in Delaware, and has its finances managed by Roger Muse, the treasurer for the US accreditation body ANAB. I’ve personally warned Muse to reconsider signing any future tax returns for IAF, given the potential consequences.

The current Vice-Chair of IAF is ANAB’s Lori Gillespie, further entangling the US accreditation body into the mess.

To apply pressure on the IAF to join the rest of the free world in breaking ties with Russia and its state-run military firms, contact Elva Nilsen at secretary@iaf.nu and Riva at e.riva@accredia.it.