Defying Sanctions, IAF and IQNet Must Answer for Role in Ukraine Invasion

As the Russian invasion of Ukraine continues into its second week, the International Accreditation Forum (Delaware USA) and IQNet (Bern Switzerland) continue to ignore US and EU sanctions against Russian firms which provided weapons and military systems used in the war. At the same time, the US and European partners are expanding the sanctions, and specifically calling out the Russian companies that IAF and IQNet continue to support.

As reported by Oxebridge for the past year, both companies operate as accreditation body overseers, and yet have refused to honor specific sanctions against the Russian state-run defense manufacturer Rostec. Instead, the IAF and IQNet have allowed its members, including Akkreditierung Austria, to partner with Rostec in multiple ways, and have accepted Rostec money by way of payments for accreditation “peer audits” and other service fees. The IAF, operated out of Delaware but managed on a day-to-day basis by Canadian administrator Elva Nilsen, has specifically refused to address its role in propping up Rostec, even as war with Ukraine seemed more imminent. Oxebridge has filed a complaint against IAF with the US Dept. of Treasury’s OFAC agency for violating the sanctions.

Nilsen received over $300,000 in salary payments in 2020 from her work in managing the IAF. That figure represented 58% of IAF’s annual revenue for that year. To me, it’s clear that the IAF is a make-work project for Nilsen, who cares nothing about international law nor the validity of accreditation, and uses the IAF as her own personal profit center.

Nilsen could face hundreds of thousands of dollars in fines and up to 30 years in US Federal prison if it is found she willfully violated the OFAC sanctions.

Akkreditierung Austria has provided direct support to Rostec and the Russian military by partnering with such companies, and allowing them not only to issue ISO certifications to others, but also to other Rostec companies, a gross conflict of interest. Akkreditierung Austria then refused to investigate, nor take action to stop the practice when Rostec’s role in the prior Crimea invasion by Russia was revealed. AA is a member of the IQNet network, which has refused to eject the accreditation body over its violation of the sanctions.

Things are about to get roughter for IAF and IQNet, as the Biden Administration is planning to announce further sanctions against Rostec, as are the UK and various EU countries. 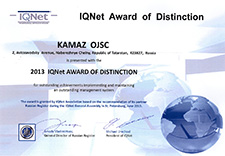 Another state-run Russian manufacturer, KAMAZ, manufactured much of the vehicle hardware used in both the Crimean and Ukraine invasions, including the BA-60K2 Bulat Armored Personnel Carrier. Meanwhile, KAMAZ holds ISO 9001 certification issued by Russian Register, a certification body that holds membership in IQNet as well. Its website includes an “Award of Distinction” issued by IQNet.

The EU is preparing to release new sanctions against KAMAZ, setting both IQNet up for more scrutiny as a war profiteer. IQNet’s CEO Pedro Castro Alves has repeatedly refused to take action on these matters, nor comment. Alves’ personal salary at IQNet is believed to be tied to the payments received from bodies like KAMAZ.

Another Russian firm named in the sanctions is Sovcomflot (SCF), which held ISO 9001 certification issued by US registrar DNV-GL, but I could not confirm if that certification is current.

Companies routinely seek accredited ISO 9001 certification as a means of presenting themselves in the market as being capable of producing high-quality products. These certificates then allow the companies to transact business more easily with international partners, and obtain lucrative contracts worldwide. The IAF is supposed to oversee rules that ensure certifications are only issued to companies that comply with applicable “statutory and regulatory requirements,” but the group instead overlooks violations and helps squash formal complaints filed against violators. Because it is a US company, the IAF represents a stunning example of how the payment of accreditation fees is used as a “protection racket” to aid and abet criminal enterprises, by granting them authentic-looking certifications and helping legitimize their reputations in international markets.

I’ll go as far as to say the payment of fees to IAF, IQNet, and organizations like Akkreditierung Austria amounts to criminal money laundering, and that the protections then granted to the perpetrator companies are a violation of international law.

I’ve written to IAF chair Emanuele Riva and demanded he revoke certifications issued to Rostec and other sanctioned bodies, and warn Akkreditierung Austria and ABs that continued violations of sanctions should be met with full IAF removal. At the same time, I am prepping another OFAC report against the IAF for its failure to take action during this conflict.

UPDATE 6 March 2022: IQNet has announced it will honor the sanctions, and has de-listed all certificates issued to Russian companies. The IAF continues to ignore international law, and maintains its support of its Russian accreditation body members.