For years, Guberman has railed against the IAF accreditation scheme, calling the IAF corrupt and a scam, as part of an overall G-PMC marketing scheme to get clients to abandon IAF-matrix registrars and purchase certificates from G-PMC. Guberman claims multiple accreditations, but Oxebridge has reported that the “accreditation bodies” claimed by G-PMC either do not exist, or are operated by Guberman himself. In some cases, the “staff” listed for his bodies are comprised of fake profiles and photos of dead people. None of the companies appear to be legally formed in any of the states in which they claim to operate.

In December 2015 Guberman broke his IAF embargo to announce that his organization had become, itself, ISO 9001 certified by Generic Management Systems, out of India. The certificate was clearly fraudulent, in that GMS has no office in the United States to conduct an audit of the Connecticut-based G-PMC, and it listed the scope of G-PMC’s activities as manufacturing, not ISO registration services. The GMS certificate included logos for both the IAF and RENAR. It was further discovered that the ISO 9001 certificates issued by Generic were a photoshopped alteration of existing certificates issued by the accredited registrar, Bureau Veritas.

Shortly thereafter, Guberman began issuing G-PMC certificate for ISO 9001 that included the IAF and RENAR logos, in violation of international trademark law. One certificate was issued to the amplifier manufacturing company, Amplitech of Bohemia NY. Guberman later issued a revised certificate that bears only the logos of G-PMC’s fictional accreditation companies. The signature on the revised certificate is one “Ray Mullin” who could not be confirmed as actually working for G-PMC, and whose email address is actually forwarded to Daryl Guberman. The original certificate was signed by Jack Oliver, who is actually a quality manager at a Texas labeling company who allows Guberman to use his signature on such documents, but who does not actually issue them. 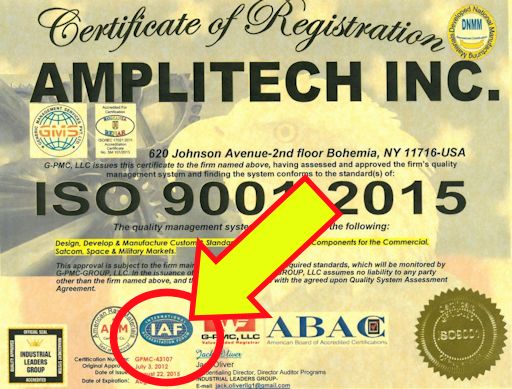 G-PMC issues ISO 9001 certificates without conducting on-site audits; Guberman once personally agreed to provide certification services to a fictional company that claimed to manufacture life vests made of cement; Guberman continued to offer the certificate even after fake test data showed how many “fatalities” the vests caused. In 2014 it was discovered that G-PMC issued a firearm manufacturing certificate to a made-up standard called “ARM 9009” that the client admitted they had never seen, despite having received a G_PMC certificate that claimed compliance to it.

The Generic Management System certificate was reported to RENAR, who requested corrective action on the part of the registrar. Due to a failure to respond to the complaint, RENAR temporarily suspended Generic’s accreditation. Now, RENAR has updated Oxebridge indicating that Generic ignored the suspension and continued to issue ISO 9001 certificates with the RENAR logo; as a result, RENAR fully and permanently withdrew the entire accreditation from Generic Management Systems, prohibiting them from issuing accredited ISO 9001 certificates from this point forward. The Generic website still does claim RENAR accreditation.

According to RENAR, Generic Management Services is appealing the decision. The full letter from RENAR explaining the withdrawal can be read here.

At the same time, Generic Management Services has posted the following on its website, claiming the Guberman certificate is “a fraud”:

A fraudulent ISO 9001:2015 certificate posted on the website “http://www.g-pmc.com/wp-content/uploads/2016/01/GMS-RENAR-Certificate.jpg” of organization name “G-PMC Group, LLC” is not issued by Generic Management Services Pvt. Ltd. GMS confirm that G-PMC Group, LLC is not certified by GMS & posted certificate is Fraud. 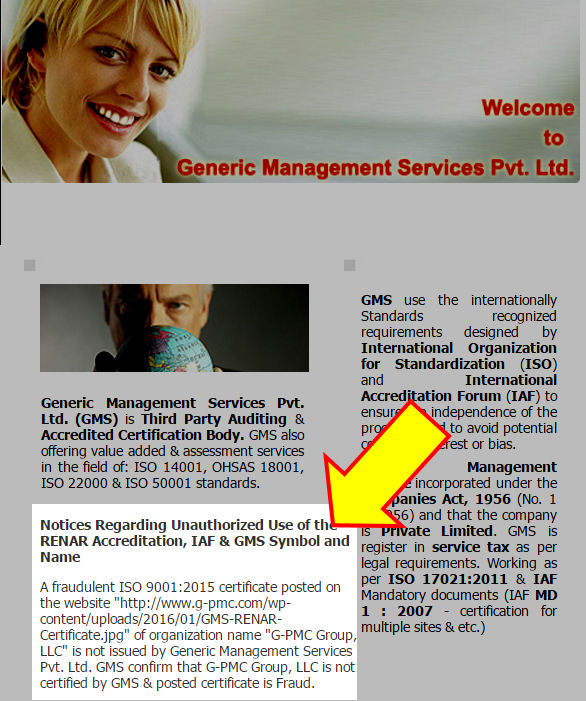 In the interim, the IAF has not apparently done anything to stop Guberman from issuing certificates with the IAF logo, despite it being a violation of law, nor to stop him posting the Generic Management Services ISO 9001 certificate on his website. The IAF has been traditionally weak in enforcing proper usage of its logos and claims of false accreditation. In 2014, the Hungarian division of Hoerbiger was discovered to have been circulating a counterfeit “photoshopped” ISO 9001 certificate with the logos of registrar LRQA as well as that of the IAF, in order to gain access to a contract with INA Oil which required ISO 9001 certification in order to bid. Despite this being a potentially criminal act, after LRQA was informed and asked to take legal action, LRQA instead sold Hoerbiger Hungary a three year auditing contract and issued Hoerbiger a “valid” ISO 9001 certificate. The IAF ruled that this was acceptable, and never protested the illegal use of its own logo. This has signaled to the world that companies can illegally boast of IAF accreditations provided they simply buy a valid certificate if they are ever caught.

Oxebridge suspects this is because despite its revenue stream, the IAF does not retain in-house legal counsel, making it a toothless organization, unable to carry out its mission of ensuring only valid, accredited ISO 9001 certificates are issued.

Oxebridge has argued that G-PMC and Guberman defraud clients through deception about his self-ownership of both G-PMC and the various accreditations he claims, and by deceptively claiming G-PMC has achieved ISO 9001 when it has not. Guberman, along with his partner Don LaBelle, have responded by making dozens of defamatory and illegal posts about Oxebridge on Ripoff Report, Facebook and LinkedIn, accusing Oxebridge of fraud. Guberman and LaBelle have made a number of harassing and obscene phone calls, often doing so under their own names and using their own cell phone numbers. In one, Guberman imitated Donald Duck while calling Oxebridge’s founder a “motherfucker” (voice mail recording here); a former employer of Guberman said he was “obsessed” with using the Donald Duck voice at inappropriate times. Guberman and LaBelle have filed over 40 fraudulent DMCA copyright notices demanding the Oxebridge site be shut down, acting in apparent collusion with official US TAG 176 leaders such as Alka Jarvis and Paul Palmes.

Guberman and LaBelle have tried to rewrite history by claiming, in a new post on their ABAC website, that the entire GMS/RENAR scandal was a “sting” operation. You can read the entire mess, along with some dramatically illegal defamation against Oxebridge, here. Suffice it to say, they don’t explain how they then used the RENAR and IAF logos — which they obtained from the fraudulent GMS certificate — on a certificate that Guberman then issued to AmpliTech.