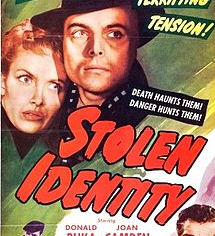 It’s becoming impossible to anticipate the depths to which Daryl Guberman and Don LaBelle will sink to promote their unaccredited certificate mill G-PMC Registrars LLC, but it’s clear that no level of deception nor false advertising is beyond them.

If you recall, Guberman and LaBelle issue  certifications for ISO 9001 and a host of other management system standards, many of which they invented from thin air, through their registrar G-PMC. They then claim G-PMC is independently and “internationally” accredited by the “American Board of Accredited Certifications” (ABAC), which is just another company name used by Guberman and LaBelle. Going further, they then issue food safety and Kosher certifications under accreditation by the “National Food Safety Council,” yet another Guberman/LaBelle company name. We must say “company name” and not “company” because none of the organizations appear to have  been legally formed nor licensed to operate in any US state; instead, they appear to merely be websites with logos. It is unclear how, or if, Guberman processes taxes for his income if the companies are not legally entitized.

Deception is stock in trade for Guberman and LaBelle, who have built G-PMC on the basis of openly fraudulent statements, while falsely accusing their critics of the exact same transgressions they openly engage in. G-PMC claims to have “thousands” of clients worldwide, and to be the “fastest growing” registrar in the world, when by all accounts they have less than 20 clients, nearly all of whom are in the US Northeast. Years back it was discovered Guberman had fabricated over a dozen “testimonials” from alleged clients, the bulk of which were published without the knowledge of the named individuals and which had included badly forged signatures using standard MS Windows script fonts; Guberman was forced to remove over half of them after the individuals complained that they never gave permission to be named on his site, and had not endorsed G-PMC at all.

A G-PMC client admitted to Oxebridge that it had received a certificate to a standard called “ARM 9009” for firearm manufacturing, but that they had never seen the actual standard. They reported that Guberman told them it would be written after they received the certification, meaning the company was certified to a standard that did not exist. At one point, Guberman agreed to provide ISO certification to a fictional company named “LifeSink” that alleged to manufacture life vests filled with cement, designed to kill the wearer; Guberman even agreed to provide the certification without conducting an on-site audit.

Recently, Guberman and LaBelle filed dozens of official copyright takedown notices, signed under penalty of perjury, indicating they had power of attorney granted to them by US TAG 176 members. The TAG members never authorized them to file these notices, and never granted them power of attorney. Nevertheless, LaBelle and Guberman continued — and still continue — to threaten legal action on behalf of people they’ve never met, putting the victims at risk of becoming accidental plaintiffs in lawsuits they know nothing about.

When exposed, Guberman and LaBelle resort to all manner of harassment and intimidation, leaving obscene phone messages, posting defamation on Ripoff Report and Facebook, and falsely accusing their detractors of crimes. In order to promote his Kosher certification program, Guberman wrote an antisemitic rant that accused Israel of terrorism while borrowing the “Jews are Christ-killers” argument from white supremacist circles. Recently, Guberman left an obscenity-filled phone message on the voice mail of Oxebridge, but doing so with a Donald Duck voice.

Now we find the various Guberman/LaBelle websites feature staff and advisory boards consisting of individuals who — like his so-called testimonials — never agreed to be so featured, as well as others whose credentials have been greatly exaggerated. Worse, some of the people listed do not actually exist, or are dead. One of the alleged staffers is actually a former co-worker of Guberman who suffered a stroke and is now in a nursing home, unable to defend himself.

First up is Jack Oliver, who Guberman claims is the “Credentialing Director and Director of Audit Programs” for G-PMC. Oliver is actually Quality Manager for Texas-based manufacturer Nosco, with a background in packaging, but who is touted by Guberman as being an expert in everything from firearms to environmental management, laboratory accreditations and medical devices. Meanwhile, however, Oliver’s actual resume on LinkedIn indicates, “My experience with packaging component includes Folding Cartons, Shrink Sleeves, Labels and Contract Packaging.” His signature now appears on most of G-PMC’s dubious ISO 9001 certificates, potentially exposing him to litigation, a fact which might not be lost on Guberman who no longer signs the certificates himself. Oliver is also listed as a “Food Safety Inspector” by Guberman, who has claimed his inspectors are certified by the New York City department of health, but since Oliver lives in Texas, this is impossible. When contacted, Oliver confirmed he provided “volunteer” advisory board functions for G-PMC, and was aware that his signature appeared on G-PMC certificates, but denied that he “worked” for G-PMC in any paid capacity.

Such is the tip of the iceberg. Alleged “Business Director” for G-PMC, John Masulli, likewise acknowledged he knew Daryl Guberman from past experience, but unlike Oliver had no idea he was listed on the Guberman website at all. Masulli indicated he had never worked for Guberman in any capacity and denied — three times– that he was Guberman’s Business Director. He seemed shaken by the news that Guberman had been using his name and image for years without permission.

ABAC Advisory Board member Frank Dixon, an ISO consultant who touts himself as “the world’s most interesting man,” did confirm via phone that he is a member of Guberman’s board, but admitted he had not attended any actual meetings, and could not confirm that the board had ever formally met. He claimed he had “talked to” some other members on occasion, and defended this by saying “we are all spread around.” When asked about the other members, the call went dead and Dixon did not pick up or return subsequent calls. Shortly thereafter, Guberman posted this defamatory post on his website:

(We contacted the Stratford CT police department and confirmed that no such complaint was filed; likewise, the ADL was contacted and they confirmed that there is no “investigation” underway.)

At least these men exist; the same cannot be said for alleged Advisory Board member Agatha Adelman, who appears on the sites of Guberman’s Kosher and “certified woman-owned business” certification offerings. The photo used by Guberman for Adelman appears to originate from a Russian dating site, credited to one Valentina Mladenova, a 62 year old widow listed as living in Melitopol Ukraine.  Nevertheless, LaBelle has written a number of press releases for Guberman certifications, quoting “Adelman.”

Adelman is not alone in her state of non-existence.  On the webpage for Guberman’s “PR9001” certification for public relations companies, at least four of the alleged staffers appear falsified. The photo for “Latisha Adams” is, in fact, a stock photo of a “black young businesswoman” sold by various photo outlets, including Pixabay. The photo for “Katie Pinto” is another modeling stock photo, apparently taken from a Greek lifestyle website. The photo for “Natasha Petrov” appears to have been taken from the Russian social media site VK.com, from the profile for Mayya Yarets, a woman from Gomel, Belarus. The photo used for “Rhonda Brown, ” who Guberman and LaBelle claim is the “Executive Vice President of PR/ISO 9001 Quality Certifications” is actually another stock model photo. The irony that Guberman and LaBelle have to steal stock photos and create fake people on a website about public relations is noted. 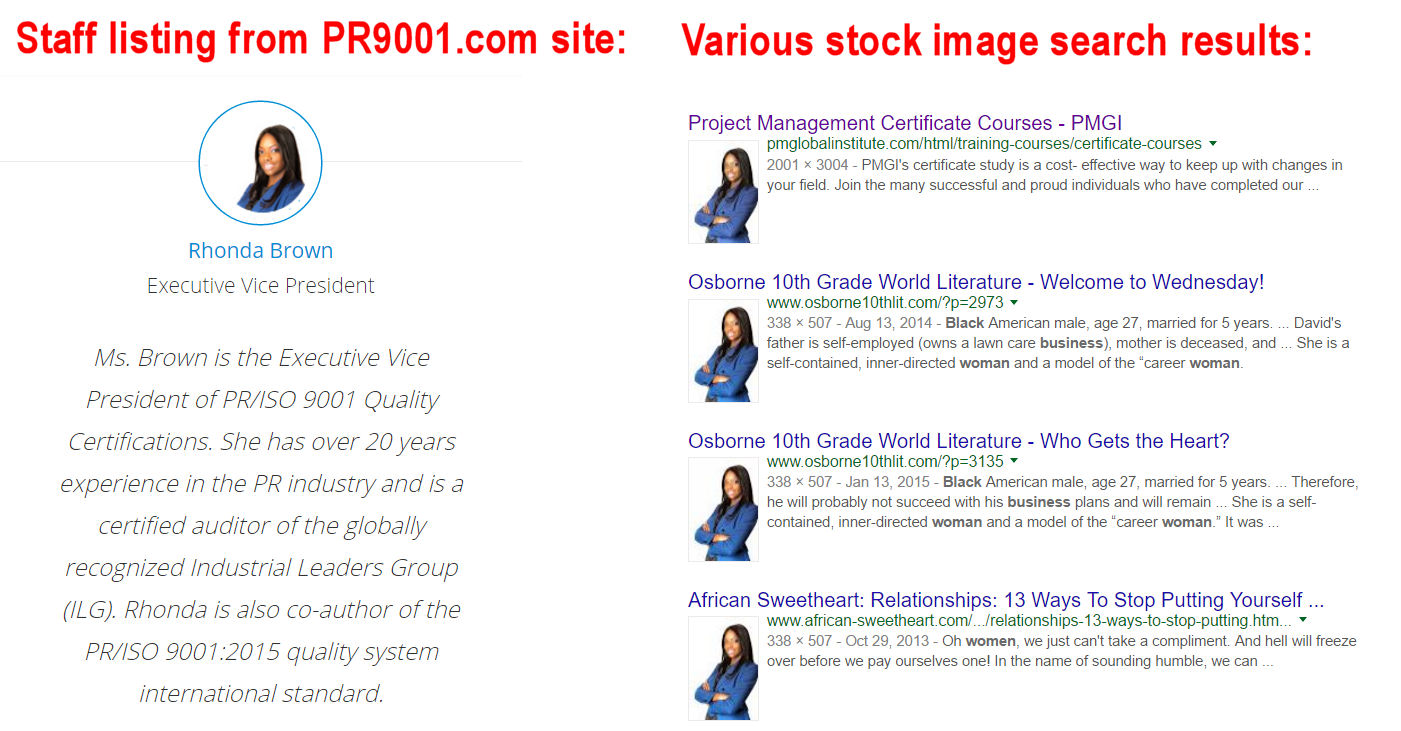 Guberman and LaBelle often invent ethnic-sounding names of fictional spokespersons designed to align with whatever product they are selling, such as “Maria Santos” and “Laticia Washington” for their Minority Woman Owned Business (MWOB) certification, or “David Cohen” or “Sara Brickman” for their Kosher KOSH9009 certification. Once a G-PMC press release is published, these names never appear again, and new names appear in future releases.

In a video produced by LaBelle to promote Guberman’s ARM9009 firearm standard, a man identifying himself as “James Harper” is seen giving a press conference in Washington DC. In fact, it is an actor posing in front of a green screen with a superimposed background; the effects are so bad, you can see the actor holding his hands in mid air, to make it appear as if they are resting on a podium, which was then digitally inserted. In another video, which Guberman falsely cites as from an appearance on CNN, also features an actor posing as a journalist in front of a computer generated background, designed to look like a cable news set; it is clearly not a CNN news desk. 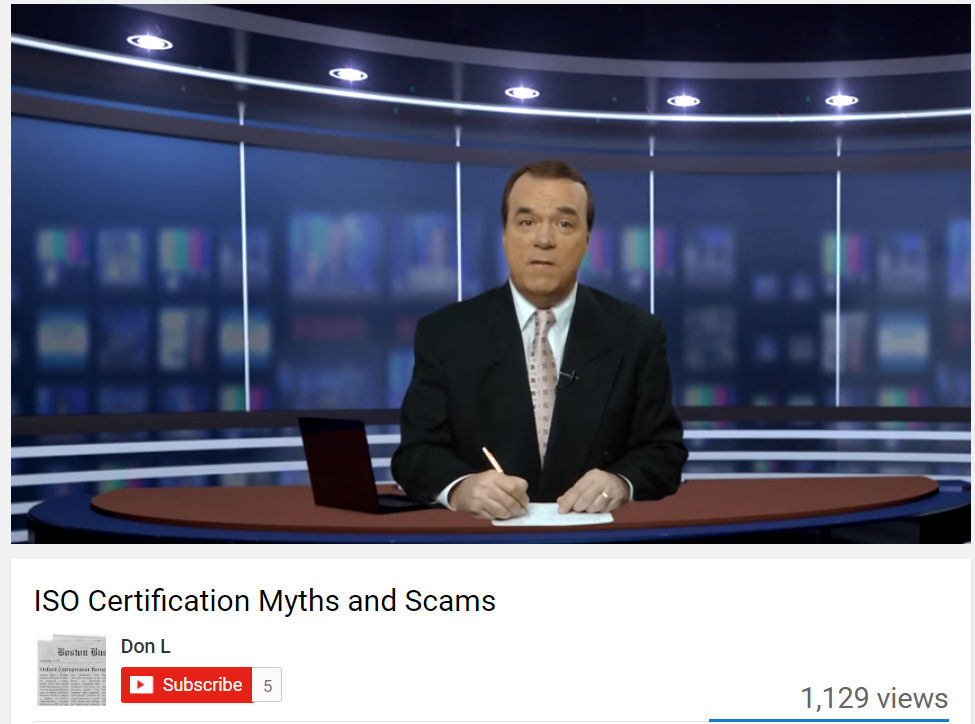 Promo claimed by G-PMC as being from “CNN.”

Taking a more gruesome turn, Guberman’s alleged “aerospace adviser” Leslie Jackson Hepler, is deceased, having died in June of 2016. One might dismiss that as a case of Guberman simply not having updated his website, except that it gets more horrific. On the website for the “National Food Safety Council” Guberman lists many of the same people on food inspectors for his wholly made-up standard “FSM22000,” including Oliver and Adelman. But this page also includes one Raymond Aneiro, a former co-worker of Guberman’s from Modern Plastics. Mr. Aneiro, however, has never worked for any Guberman company, having had a stroke in 2013; he is currently in a convalescent home, unable to speak or walk. His family was horrified to learn that Guberman was using their father’s photo and name to market his services.

The use of fictional characters to artificially boost the image of Guberman’s staff and advisory boards is likely only illegal if someone can make a proper case to the Federal Trade Commission on deceptive advertising and consumer fraud, but it’s a long shot. The appropriation of people’s identities, however, specifically of the sick, elderly and the deceased, may present an entirely new legal problem for Guberman and LaBelle. Because more than one victim is in play, the families could attack this as a class action lawsuit, while also filing FTC complaints.

Guberman, who was arrested in 2015 for DUI, is considering running for Senate.