As reported earlier, I ran a poll in the ISO 9001 User Group on LinkedIn, asking whether users believe the next edition of ISO 9001 should include requirements related to ‘climate change.” The TC 176 committee that writes the ISO 9001 standard has been directed by ISO executive management to include the topic, in one form or another, prompting some controversy.

The final results showed that 61% of respondents rejected the idea, from over 2,800 votes cast within the two-week polling window:

Behind the scenes, multiple ISO bodies have rejected the offer to look at the data, claiming either that the data was not “official,” or that it must be submitted by an official ISO member body.In reality, the “fix is in,” and there is nothing the world can do to stop it.

In reviewing the responses, it appears he bulk of the votes supporting insertion of climate change into ISO 9001 came from India and countries in that region.

The push to include climate change in ISO 9001 comes from ISO Secretary-General Sergio Mujica, who is currently serving his second, and final, five-year term of office. It is understood that Mujica, formerly a government official for the Chilean government, is seeking a position at the United Nations once his ISO term of office concludes, and so has spent much of his efforts aligning ISO’s work with that of the UN for his own personal gain. Specifically, Mujica has promised to embed all of the UN’s Sustainable Development Goals (SDGs) into ISO standards, whether they fit the subject matter or not. The UN SDGs include climate change, but also subjects such as gender quality, eradicating world hunger, and universal healthcare. 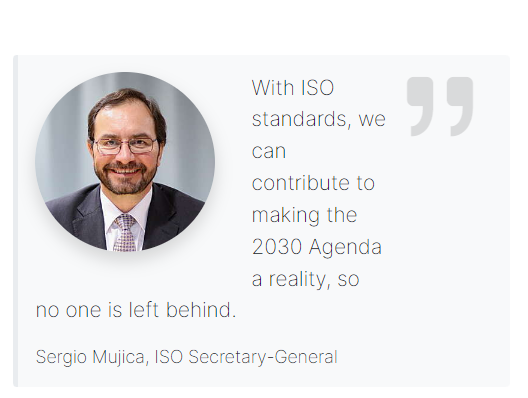 In his native country, Mujica had run the customs agency of Chile and was investigated for facilitating drug trafficking and money laundering while in that role. Mujica has refused to honor international sanctions against Russia, and still allows Russia to participate on key committees, including that for the development of ISO 9001. Mujica openly congratulated Russia two weeks after its invasion of Ukraine.

It is believed that Mujica’s personal support of China and Russia is another sign of his intent to seek a role at the UN, where those countries hold influential positions on the UN Security Council.

ISO claims to have performed a study on all of its 22,000+ standards to determine which would support each of the 17 UN SDGs:

For each Goal, ISO has identified the standards that make the most significant contribution. This site serves as a resource for those who are looking for a concrete way in which their organization can play its part. With ISO standards covering almost every subject imaginable, from technical solutions to systems that organize processes and procedures, there are numerous ISO standards that correspond to each of the SDGs.

For “climate action,” ISO says it identified 1,287 ISO standards that will be expected to include language addressing climate change. Using ISO’s online standards search tool, and filtering for standards deemed to be affected by “SDG 13” (on climate action), ISO 9001 did not come up at all, however: 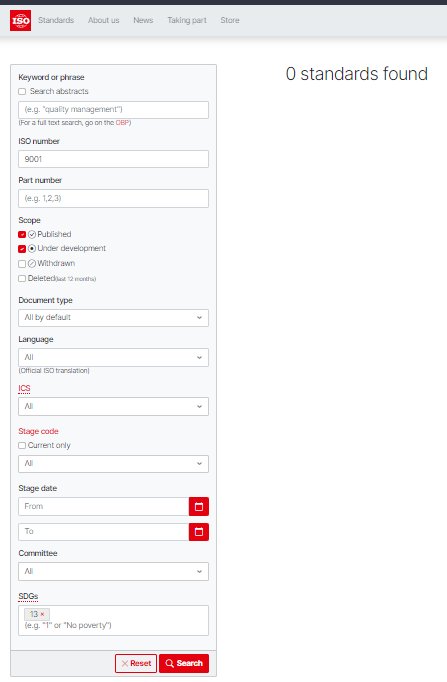 Results from search within ISO’s official tools when filtered for “ISO 9001” and “SDG 13” on climate change.

The official “ISO 9001 Future Concepts Group,” which identified various subjects of interest to be included in a future edition of the standard. Climate change was never addressed by that group as a subject of any consideration.

The entire ISO 9001 revision is already going against multiple official votes, in which ISO Member nations voted against revising the ISO 9001:2015 standard. Despite that, ISO is pushing ahead with an “early revision,” overruling the will of ISO Members, and violating both its own official procedures and World Trade Organization regulations on the development of ISO standards.

ISO 9001 represents ISO’s “flagship” standard and generates a massive amount of revenue for ISO whenever the standard is updated. A similar situation arose with the 2000 version, after nations voted to “confirm” that standard as-is. Instead, ISO released what it called an “amendment,” making minor grammatical changes, and re-issued it as ISO 9001:2008. Then, through its partnership with the International Accreditation Forum (IAF), ISO imposed a three-year transition period, forcing over 1 million certified companies to buy a copy of the ISO 9001:2008 standard or lose their certification.

ISO procedures do allow for an early revision of a standard, in between mandatory five-year reviews, to consider if significant technological changes have occurred, which may justify doing so. This is primarily aimed at technical standards, where technology advances faster than the ISO five-year review cycle. To justify its unauthorized revision of ISO 9001:2015, however, ISO is taking the bizarre position that quality management technology has changed so rapidly within mere weeks after the world voted to confirm the standard, that ISO is justified in issuing an early revision anyway. In truth, TC 176 had been working on the new revision before any final votes had been tallied.

This “early revision” effort has been led, in the US, by Lorri Hunt, an ISO 9001 consultant from the US, who currently holds the most power on TC 176’s authoring activities. Hunt previously supported the insertion of “risk-based thinking” into the 2015 version, and openly boasted in US TAG to tC 176 meetings that t would represent “the biggest boon to consultants ever” she then went on to sell books and seminars on the subject, personally profiting from her role in the standards committee.

US TAG leadership has proven unwilling or unable to rein in Hunt’s conflicts of interest and influence, and as a result she has taken over international committees, as well. Despite complaints filed by international bodies, Hunt has remained in place, and continues to push for making ISO 9001 a complicated, dense standard that then requires purchasing consulting services — which she sells — in order to decipher them. Under Hunt’s leadership, the influence of consultants and certification bodies has grown to over 90%, with standards users no longer participating in TC 176 in any real capacity.

To date, a full design specification has been developed for the next edition, and a “secret draft” of the revision has been written. The secret draft is merely a stab at incorporating some updates already made to the Annex SL core text and fitting it into the current 2015 version, but it debunks the claim by ISO that “no work has begun on an update to ISO 9001.” Ignoring the secret draft entirely, it’s clear that TC 176 wouldn’t have bothered with the development of a design specification if it didn’t have a mandate to update the standard regardless of the world’s votes.

So, no, a revision is definitely coming, and they are already writing it.

Other SDGs Likely to be Inserted

So the push to include climate change in ISO 9001 — again, which ISO itself has determined isn’t even applicable to ISO 9001 — comes from the cynical desires of key figures, such as Mujica and Hunt, to either burnish their professional credentials or sell subsequent consulting services. This is not driven by any thoughtful rationale on how a quality management system can affect global climate change.

Making matters worse, ISO has begun floating the imposition of “gender equality” into ISO 9001 as well. I’ll have more reporting on that as I gather more evidence of their internal communications on the issue.