Welcome to the Multiverse: the Bizarre Argument to Let ISO 9001 Cover Everything, Everywhere, All at Once

It’s been understood for decades that ISO 9001 is a quality management system standard. In fact, it even says that on the cover. For those that don’t read covers, it repeats this fact in the introductory material: 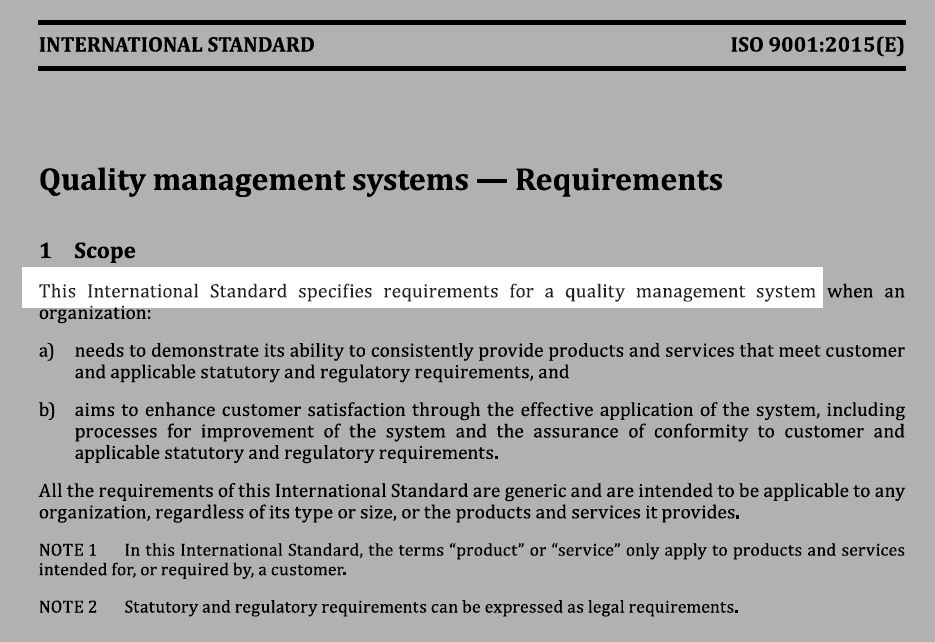 I won’t insult your intelligence by running to ISO 9000, the standard for terms and definitions, to define what a “quality management system” means. You already know that.

Even where the standard name-drops “statutory and regulatory” issues, it always does so by adding clarifying language that explains ISO 9001 is talking about those issues related to the quality of products and services.

But that fact hasn’t stopped people from trying to expand ISO 9001 to include concepts and topics having nothing whatsoever to do with quality. Instead, they have tried to get ISO 9001 to be a single “business management system” standard that covers everything, everywhere, all at once.

We saw this creeping into the official standard, too, when Sweden injected language into clause 7.1.4 (“Environment for the Operation of Processes”) regarding a need to maintain a work environment that was “emotionally protective” and “stress-reducing.” The language was put in a note, so it’s largely ignored, but defenders claim that you cannot expect to product a quality product if your employees are stressed out. Ironically, many people arguing for this are doing so on Apple computers or iPhones, unaware that the factories where those devices are made are far from being “emotionally protective.”

The recent poll I ran on LinkedIn, where I asked if users felt the upcoming ISO 9001 revision should include “climate change,” resulted in a lot of comments which started to fall into the “ISO 9001 Multiverse” view: that everything under the sun should be covered in the standard. As I have already argued, this kind of thinking comes primarily from disgruntled quality industry professionals who are trying to insert their personal pet interests into a standard designed for third-party certification. If you don’t like their particular issue, then you will lose your ISO 9001 certification, and have a nice day.

ISO 9001 is, they insist, a “business management system” because “quality” covers everything. That’s never been true, but these folks need to believe that. For some reason, recognizing the reality that quality management has limits requires surrendering one’s entire belief system.

Meanwhile, those same people are so stuck in their own bubble, they don’t know that the other bubbles in the multiverse are making the same argument. Risk experts say that risk management must govern every aspect of the company, while cybersecurity folks say the same thing about their profession. Everyone argues that their particular profession should hold dominion over every other profession. Meanwhile, bosses are rolling their eyes at the chaos.

In the comments to the LinkedIn poll, this problem was magnified tenfold. Even though the poll showed 61% of respondents reject adding climate change, the defenders of that move went far, far further. Instead, they argued ISO 9001 should cover everything one can imagine.

ISO 9001 auditor Elena Dolia suggested that ISO 9001 already covers finances, and that auditors should be checking things like whether the company is making a profit, how fast it repays loans: 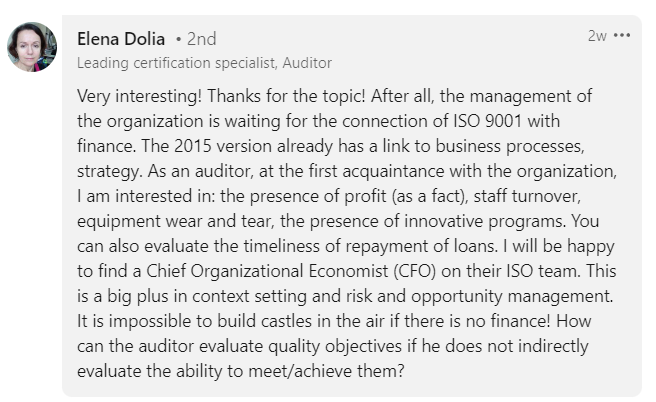 Dolia appears unaware that making this argument would disallow non-profit organizations or companies suffering from short-term economic downturns from being ISO 9001 certified. 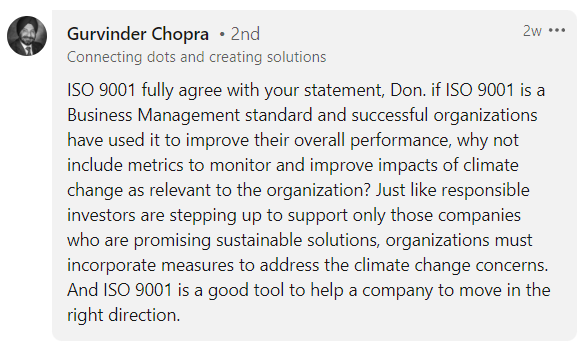 Anneliese Paukner appeared to argue for injecting climate change into ISO 9001 not because it was on-topic, but merely because ISO 9001 is more popular than the standards where it would more sensibly belong. She said, “a quality system cannot deliver quality products nor services if they are in decrement of the environment.” 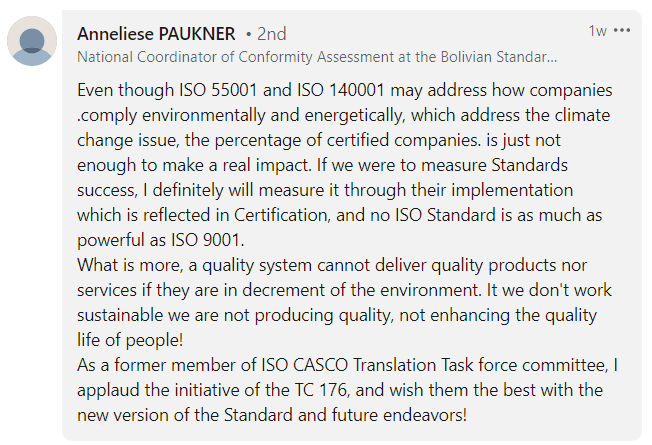 Biswajit Chatterjee captured the spirit of the “multiverse” view by suggesting the entire quality management profession, and definition of “quality” itself, should be updated to address global warming:

Sedat Erdal said much the same:

In posts that really broke my heart, because I consider him the best author on books related to ISO 9001, David Hoyle dug in on the multiverse view, arguing “product quality will be redefined in terms of its effect on future generations.” When I asked if ISO should then adopt other regulatory postures, perhaps related to abortion, Hoyle doubled down and argued that the opinion of users related to ISO 9001 shouldn’t matter at all:

The question is, should customers be the sole arbiter of product and service quality? If the customer is the only party affected by the product they acquire, such a case can be made but not if humanity and planet Earth is detrimentally affected.

It went downhill from there, as Hoyle refused to limit ISO 9001’s references to “statutory and regulatory requirements” to those related to the quality of products and services, and instead just took the broad view that ISO 9001 was talking about every possible statute and regulation.

We exist in a world in which most suppliers attempt to meet customer requirements often without considering the consequences on the ecosystem on planet Earth – it’s time for a change. Managing quality is only partly about the quality of conformity. There is, as Dr Juran points out, two other parameters, quality of design and quality of use. Let us not ignore these important parameters.

In response to another commenter, Hoyle went further still, arguing the definition of “quality” must be updated, and that “by 2050 we should expect all organizations to provide products and services that … have not consumed any unsustainable resources and materials harmful to the natural environment…”: 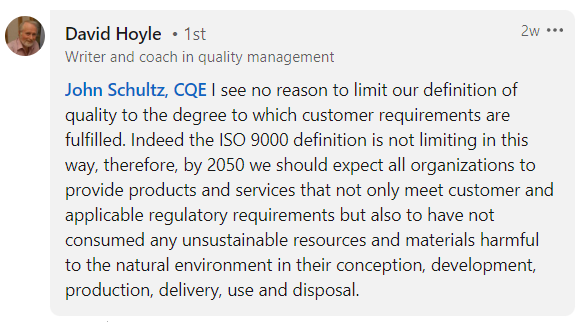 It went on and on. Payam Fotouhiyehpour  mirrored this sentiment, suggesting all regulations of any stripe fall under ISO 9001:

Ravi Shinde said that ISO 9001 should include not only climate change, but all 17 of the UN Sustainable Development Goals: 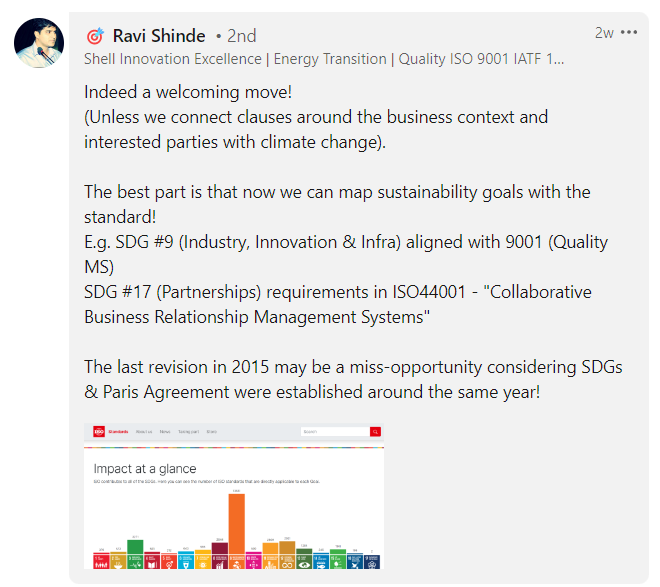 Likewise, Mohammadreza Janbakhsh suggested ISO 9001 should go further than addressing climate change and add the other UN SDGs, such as gender equality:

Tawana Rogers went further still, saying that ISO 9001 should be updated to include cybersecurity and DEI (diversity, equity and inclusion) requirements: 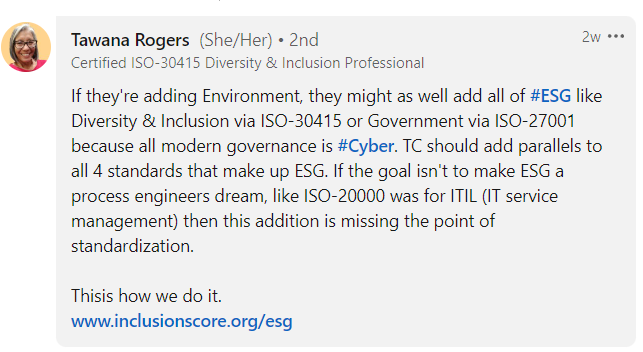 (You can read the thread here (but will need to join the ISO 9001 LinkedIn Group to view it.)

Trying to Make Everyone Happy

Clearly, this is all driven by individuals who feel passionate about an issue and want to use ISO 9001 as a cudgel to get that particular interest enforced through certification audits. Those same individuals, then, don’t look outside themselves far enough to see that there are many other individuals with other passions about other issues, who are arguing for the same thing. If ISO were to try and make them all happy — which ISO is apparently trying to do — it would find it failed. As the saying goes, those who try to make everyone happy end up making no one happy.

In the case of David Hoyle, for example, it’s clear he is passionate about climate change, and that’s great. So am I. But we see it infecting his view on an entire profession, and he suggests altering that profession — including the words used within it — to suit his personal interest. Meanwhile, I suggested “why not abortion, then?” because many people are equally passionate about that subject, and not so much about climate change. To please one of the sides of the abortoin debate, should we put that in the ISO 9001 standard, too? if so, which side? Pro-choice, or pro-life?

What about other crucial matters? The UN SDGs cover universal healthcare. Should ISO 9001 insert a requirement demanding user organizations provide a certain minimum level of health insurance to their employees?

The UN SDGs also cover world hunger. Should ISO 9001 require that user organizations donate a particular % of their profits to a hunger charity? Or open a soup kitchen as a condition of ISO 9001 certification?

I’m passionate about animal welfare. Should I take a stand that ISO 9001 have an entire clause on this topic?

If you remain in your bubble, surrounded only by your chosen topic of preference, you can be fooled into believing your view is rational and obvious. But once you step outside that bubble, and see all the other bubbles around you, you can realize that we cannot focus on all at once. The UN had to develop seventeen SDGs, because one single SDG wasn’t enough. But some would have a single standard — ISO 9001 — attempt what the UN couldn’t do.

ISO 9001 is not a multiverse. It cannot contain everything, everywhere, all at once. And it shouldn’t be the dumping ground for each individual’s particular topic of interest, no matter how dramatic an impact it might have on the world. ISO has over 22,000 standards, and topics need to be put into standards related to that topic. ISO 14001 is the best place for requirements related to climate change, and even ISO itself has admitted that. As I wrote earlier, even ISO didn’t see fit to assign the UN SDG on climate change to ISO 9001. (It is pushing ahead with adding it anyway, because ISO 9001 consultants want to create a new revenue stream for themselves.)

Quality management professionals need to stop trying to steal power from every other discipline by injecting their personal beliefs and interests into ISO 9001.