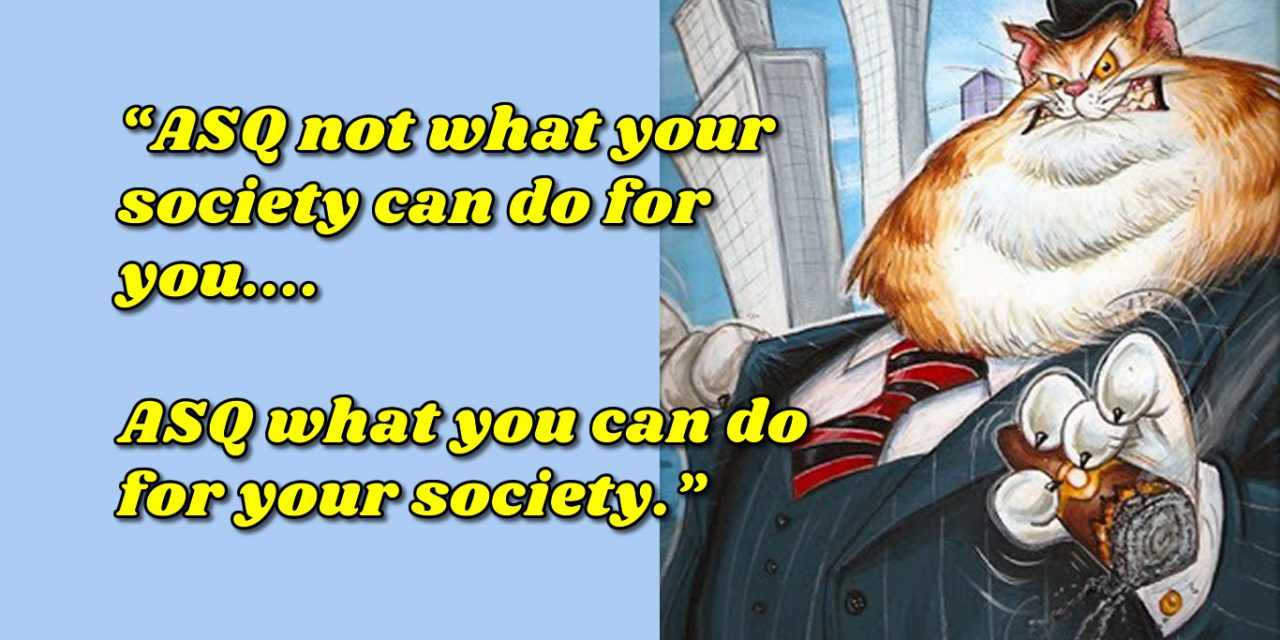 The most recent tax filings for ASQ are a stunning look at what appears to be full-on raiding of the organization’s coffers by a select group of executives who seem to think they are answerable to no one. (And so far — thanks to a largely hypnotized membership body — they’re right.)

As a 501(c)(3) not-for-profit organization, ASQ must file its tax returns publicly, meaning anyone can view them. Understanding them is another trick altogether, however. But what’s evident is that the leadership gave itself across-the-board raises at the same time those leaders were steering ASQ into the financial rocks, and potential criminal investigations.

Former CEO William Troy, who was ousted just a few months after the tax filing was submitted, gave himself a 22% raise, jumping from an annual salary of $341,890 in 2017 to a whopping $417,112 in 2018. That’s a $75K increase for having run the society roughly into the ground. It was under Troy’s bungled leadership that membership has dropped, and draconian policies were adopted. Those policies included forcing every Section in the country to empty their bank accounts in the HQ’s account, under the promise that funds would be “re-allocated” to the Sections as needed. That hasn’t happened, and sources tell me now it may never happen, as ASQ is considering filing for bankruptcy.

It was under Troy that the Sections were then forced to shut down their local websites, so that all Section communications and marketing could be put under “centralized” control by … er, the HQ, through the “MyASQ” web platform.

It was under Troy that ASQ had to divest itself of the accreditation body ANAB, and then evict them from their building entirely.

And of course, it was Troy that couldn’t manage to rein in racism on his watch, leading to a few agonizing years of watching the Society reach out to white supremacists, instead of telling them to pound sand.

It was under Troy that they disbanded lower-tier membership options for students and others, forcing them to (now) pay full membership price. Presumably, trying to boost your profits on the backs of unemployed students is a winning strategy?

For his performance in all these things, Troy gave himself a $75,000 salary increase, and was promptly walked out the door with his things in a box. An undignified end for the former Army Lt. General.

The other execs benefited from their managerial incompetence as well. CFO Brian Savoie’s salary jumped from $155,000 to over $203,000, an increase of 31%.  Remember, he’s their finance guy. You know, for the organization that is facing financial ruin.

Even their Chief Human Resources Officer got in on the gold rush. Lindsey Linder saw an increase of 30%, reaching a salary of over $195,000 in 2018.

Now let’s look back at the timeline. ASQ announced its plan to abscond with Section funds at the beginning of 2018. The 2018 tax filing was then prepared and signed in November of 2019. That means that the salary increases went into effect during and after the Sections were forced to surrender their local funds, which had been collected from local dues and locally-organized events. At the time of those events, the members were under the assumption the funds would be kept by their Section, to be used to promote that Section, and to fund future events. Instead, it now looks like the money was funneled back to ASQ HQ to pay its expenses, and then used to fund an increase in ASQ executive salary totaling over $2.1 million.

That money is gone. It can never come back. Now it looks like whatever wasn’t spent or wasted wound up in the personal bank accounts of the leaders!

Let me clear: I’m not a tax attorney nor an accountant. I’ve had some rough conversations with attorneys and non-profit experts, however, and they are worried. They always tell me that their opinions are just that — opinions — and cannot be taken as legal advice, and that any actual truth must be gleaned by auditing the books and investigating those responsible. But they all agreed that something does not add up, and should be looked into by the FTC or IRS, at least.

The rape of the Section funds doesn’t seem to end with inflated salaries by executives rewarding themselves for their proven track record of failure. The 2018 return shows ASQ spending heavily on a series of desperate gambles. They threw an incredible $1.36 million at a company called Marketing General, a consulting firm that promises to improve membership recruiting in societies such as ASQ. The payments are listed as “instructor fees.” I can presume that was a firm they brought in to develop strategies to stop the hemorrhage of members ASQ is facing.

So far, there’s no evidence their actions resulted in an increase in membership.

Next, ASQ spent another $900,000 on a similar firm, Prometric, for unspecified “consulting” fees as well. That organization appears to manage testing, which would make sense given that ASQ does manage the tests needed to grant its various certifications. But Prometric never before appeared on any ASQ filings, so this was something new.  It’s also curious, since ASQ then spun out the certifications to another company entirely, “ASQ Excellence” (ASQE) presumably around this same time.

So it looks like ASQ members paid $900K for a company that helped form another company that their dues are legally not allowed to flow into. Then, Jim Templin promptly made himself CEO of that company, so he can collect a salary there, too. If he hasn’t resigned from ASQ, then he’ll be double-dipping.

Meanwhile, ASQ’s failed enterprise “ASQ China” continued to lose money for like the millionth year in a row, costing ASQ over $112,000 alone. ASQ Mexico lost over $300,000, and ASQ India lost $194,000. These enterprises have never brought actual profits in, so it’s not clear why they have been allowed to exist. But members rarely look at these returns, so probably have no idea their dues and revenue are going into long-lost causes.

On the whole, ASQ’s salary expenses jumped from $13.9M to $16.1M. While their “investment income” drove in a massive, one-time $5 million cash influx, due to the sale of ANAB. Had they not dumped ANAB, things would have appeared much, much worse. But remember: that ANAB sale can only happen once, and it barely saved ASQ this time. Next year, they won’t have an accreditation body to sell.

Analyzing their revenue history is even bleaker. The Society was ambling along with modest increases per year until 2016, the first year most likely impacted by Troy’s management. That year saw only ASQ only gain $5,000 (as in thousand, which is outright paltry). Then the freefall started, with them losing just under $2.6M in 2017. ASQ would have lost another $617K in 2018, had the ANAB sale not artificially inflated the numbers.

Which means the 2019 filing is likely to be a bloodbath, except for Jordan, Templin and the other execs.

Something here is not passing the smell test.

The formation of ASQ Excellence was clearly to avoid some very uncomfortable oversight by the government. Prompted possibly by my own complaints to the IRS about their potentially illegal fundraising, ASQ was subjected to an audit which — by all accounts I’ve heard — did not go well. The IRS allegedly warned ASQ that its 501(c)(3) status was in jeopardy because much of what it was doing was not “charitable work.” That includes selling an endless stream of junk certifications to members. There’s no way to spin that as “charity,” and that’s why neither Amway nor Herbalife are “charities.”

But a 501(c)(6) doesn’t have that restriction. So the new ASQE organization can sell whatever it wants — used cars with trunks full of heroin — and still keep it’s tax-exempt status. So ASQ announced that ASQE would be taking over the certification and training portions, leaving ASQ with not a whole lot to do.

But here’s where things get dicey.

US law prohibits a not-for-profit from collecting money under one set of circumstances, and using them for another. The only exception is if the funds are collected under clearly-defined “unrestricted” terms and conditions, make clear to those who are donating or buying its stuff. ASQ didn’t do that, however, leaving them as “restricted” funds. When the Sections collected funds for dinner events, for example, it was clear the funds were intended for the dinner events, or other local Section costs. At no point did any Section ever say, clearly, “these funds may be used to pay ASQ HQ executive salaries” or “to pay off the HQ’s building debt.”

As a result, the forced takeover of Section funds to pay for HQ expenses may have been wholly illegal.

Where we may fall into full-on criminal embezzlement — felonies, in fact — is if Templin and his ASQ Excellence gang took funds from ASQ, and funneled them into another company entirely. Worse, if Templin’s salary at ASQE included even a penny from ASQ Section funds.

Templin could go to jail for this.

I have to imagine with Jordan (a lawyer) and the others on board, he’s not that stupid. Hopefully, Templin waived his salary entirely, and is working for free. Or he figured some other way to fund his salary, as well as ASQE in general. Maybe there’s some loophole I don’t know about.

I mean… they must have thought this through, right? This must be part of what they spent all those consulting dollars on…. right? It’s sure dirty, yeah, but it can’t be that they committed felonies in broad daylight… can it?

But, wow… I just have to imagine those books are a mess.

Now factor in that ASQ and its current Board, led by Google’s Austin Lin, openly violated their own Bylaws by spiking the nomination of Dan Burrows to the Board, despite him having received sufficient signatures to appear on the ballot. Lin and the others may have broken the law by denying Burrows his votes, a fact made worse by Burrows’ role as top whistleblower on ASQ’s financial mismanagement. They already blocked him on the MyASQ forum, falsely accused him of ethics violations, and threatened his membership. If this isn’t whistleblower intimidation and reprisal, I don’t know what is.

When an Attorney General or IRS auditor or FTC investigator starts poking around, they are going to talk to Burrows, and he’s going to have quite a story to tell.

Let me reiterate: I’m not a lawyer, and not an accountant. There may be legal explanations for all of this. But it looks really, really bad.

And if ASQ does follow through and file bankruptcy — heck, maybe disband ASQ entirely in favor of Templin’s new organization?? — then a lot of people are going to have to answer questions that are far more uncomfortable than mine. And the people asking those questions may be wearing badges and scary windbreakers.