The sun came up, which means two things: we are here on planet Earth one more day, and another very-white CQI leader and TC 176’er is refusing to denounce racism.

In a self-promotional post of nauseating proportions, ISO’s “ISO 9001 Brand Integrity Group” leader Mark Braham, who’s also a senior member of Britan’s CQI, bragged about how he’s giving his trash to the homeless, as some sort of “charity” gesture.

Braham literally took the time to arrange old sample bottles of soap and shampoo he’s collected over the years into a Hannibal Lector corpse arrangement, then posted about how he intended to give them to the homeless. 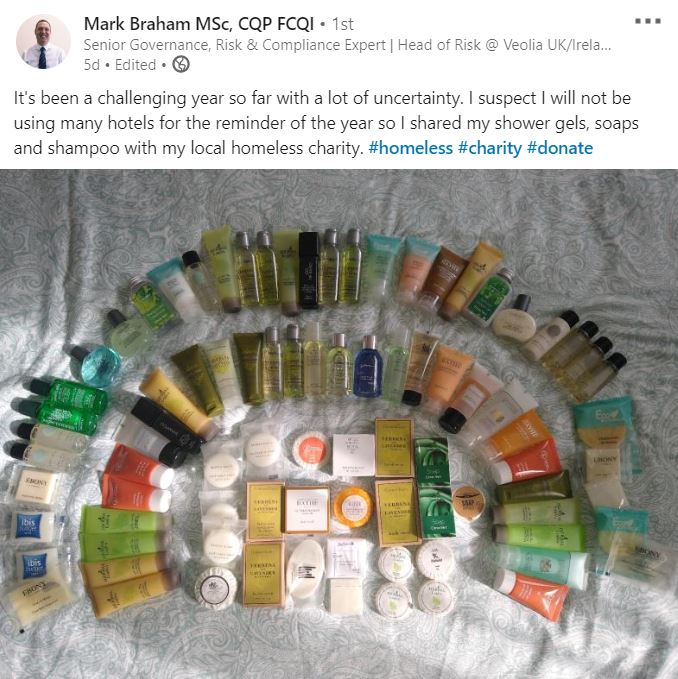 This, of course, prompted the usual gushing, fawning, sycophantic praise from other CQI cultists, who thought Braham was the bee’s knees for his selfless gesture of handing over his garbage to poor people. So far no word on what the homeless feel about some guy dumping bags of half-used soap bottles in their tent cities.

(What’s more worrying is why Braham isn’t using the soap himself. Dude, take a shower once in a while.)

When I first challenged Braham about his act of giving out trash to homeless, he reminded me of his military service, because we all know that no one in the military was ever a selfish asshole.

So I challenged Braham to the test: if he really wanted to show his commitment to a social cause, would he then demand that his pal, CQI’s CEO Vince Desmond, have CQI issue a public statement denouncing racism, in the way their cousins at ASQ did?

Braham suddenly fell silent. Up to that point, Braham was chatty AF. But as soon as I mentioned “racism,” Braham — the selfless Godsend to poor people everywhere — clammed up. 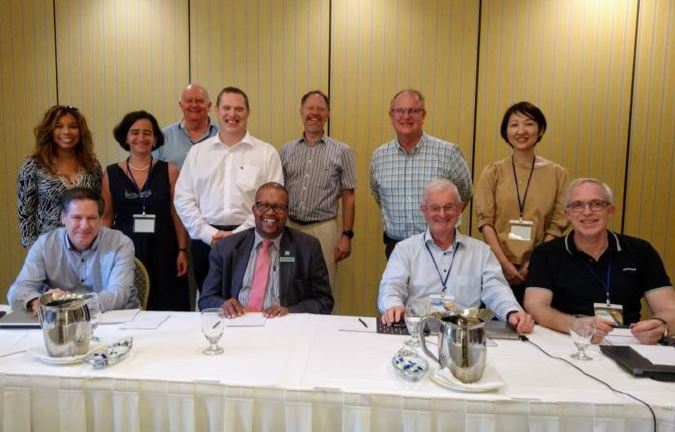 Braham is in white shirt, center, with Simpson next to him in short sleeves. One wonders what the TWO Black people on the ISO 9001 B.I.G. would think about their refusal to defend their right to be there.

I’ve argued elsewhere that Braham is a complete coward, and tool for ISO. He’s a big promoter of Annex L, and is willing to allow ISO to hand him text to shove into ISO 9001, and then pretend later that he wrote it. This latest stunt is nothing much different. Braham will do the least thing possible to promote himself (and earn “charitable works” credits towards his CQI Fellow status), but won’t actually stand up to ISO to demand they comply with their own procedures, and let TC 176 write its own text. And now we know he’s another White Brit in Power who won’t stand up for people of color in his own country, because he knows that would piss off his overseers, such as Vince Desmond.

Meanwhile, the Chair of TC 176 — Katie Altoft — itself isn’t talking, either, about the racist shit coming out of the mouths of their so-called leaders, and their stunning refusal to support minorities and denounce racism. She’s not budging on continuing to allow these blowhards their prize slots on key TC 176 committees.

But if any of you want Desmond’s used coffee grinds, Simpson’s discarded nudie mags, or Braham’s week-old bread, I’m sure they’re willing to “sacrifice” a little and give them to you.

I prefer to have my garbage put in landfill, which is where ISO gets the text for its standards anyway, so it’s sort of like I am recycling.