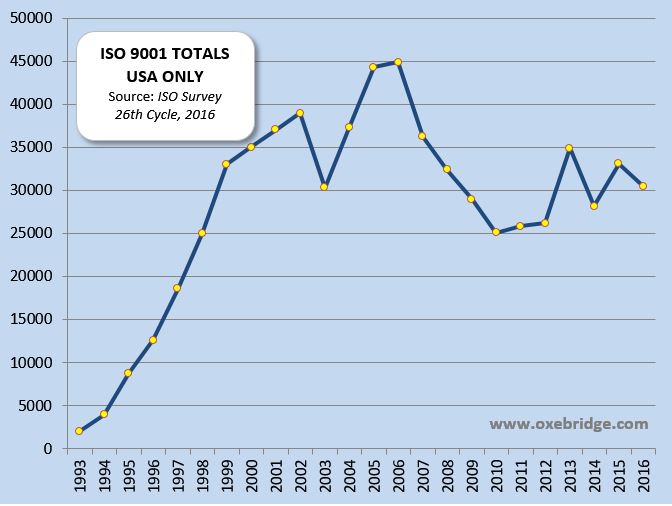 ISO has released the 26th edition of its annual “ISO Survey” data report, showing the number of certifeid companies for ISO 9001 and other standards throughout the world. As always, the usual caveats apply: ISO is a publishing company, and so they benefit from spinning the data to show how popular their products are, and the data is neither accurate nor particularly objective. This year appears to correct a few of the data glitches from previous years, where countries (including the US) artificially inflated their numbers in order to make ISO certifications appear more widely accepted, but there are still some curious figures that don’t make a lot of sense. The data also relies on information voluntarily submitted by the various registrars of the world (participation in the Survey is not mandatory) and ISO doesn’t have any responsibility to actually verify the truth of the figures. It just collects and publishes, which is basically it’s model for publishing standards, so no surprises there.

But, as always, it’s the only data we have, and it’s better than nothing. So let’s forge ahead and take a look at what it says.

(You can download the entire report here, in Excel format; see link on the right side of the page.)

As usual, China leads the way in certifications, at least on paper. China claims to have added over 58K certificates in 2015 alone, but the actual numbers are likely to be more like 3,900; the drop of 50,000 certificates in the prior year (2014) was likely a glitch, probably due to a major Chinese CB not supplying data and ISO just not caring enough to obtain it, so they published the report anyway. If we thus compare the growth between 2013 and 2015, it appears more likely that China gained about 7,831 certificates over two years, or about 3,900 per year. That’s still relatively robust, but it shows a flattening overall in ISO’s top customer.

Italy remains a reliable global curiosity, with it leading Europe in ISO 9001 certificate growth consistently for at least a decade or more. I say it’s curious because the rest of Europe appears to be dropping ISO 9001, while Italy appears obsessed with it. You can’t get a serious answer from anyone on the subject either, since Italians immediately invoke national pride and insist their quality has been superior for millennia, so there’s nothing unusual here. But it would be nice to have an objective review to find out if these numbers are real, or if they’ve been falsified, only because Italy is such a stark outlier compared to its neighbors in the region.

The US picture continues to be grim, notwithstanding the allegedly artificial “spike” seen in 2013 (+8692 certs over the prior year), which is said to be the work of one or two North American CBs artificially inflating their numbers. ISO was rumored to have corrected the data in 2014, explaining that year’s dip (-6744 certs) but the numbers again spiked inexplicably in 2015 (+4978) and have now dropped again (-2629). The short story is that the US numbers are unreliable, and as we can see, they have never shown such a chaotic pattern prior to 2012. Something is up, and until the IAF makes submission of accurate data a part of accreditation, the ISO Survey data will only become less and less trustworthy. Ignoring the 2013 and 2015 spikes, then the growth rate is relatively stable, if unimpressive.

This leaves the US at a total of 30,474 certificates, remaining significantly lower than its 2006 peak of 44,883. The numbers are nearly pointless anyway, since with an estimate of US saturation of ISO 9001 is nearly stuck at 0. Consider the US Census of 2012 indicated there are 12.9 million corporations in the US, and that means only 0.24% have bothered to get ISO 9001 certified. When you factor in non-corporate entities (remember, ISO 9001 is supposed to be generic, and applicable to any type of organization, even municipalities, schools and NGOs), the US penetration rate drops to about 0.1%.

Now consider this: based on the data, after any release of a new revision, the US typically abandons ISO 9001 as if it were toxic. After the 2000 revision, the US lost over 8,600 certificates; it took two years to regain that, and then after the 2008 edition, the US then hemorrhaged a massive 19,782 certificates between the years 2007-2010 (the drops tend to begin to take effect the year before a new edition is released, as companies drop ISO 9001 in frustration when simply hearing about a new revision coming.) The US has never regained the majority of those certificates, and now faces the very same phenomenon again. ISO and ANAB have tried to explain this as companies “procrastinating” — because they love blaming their customers for everything — and thus losing the cert in a deadline year, only to gain it back later. The actual data shows this to be untrue, since typically the number of certs regained after the deadline are nowhere near as many as those lost. In reality, companies simply get pissed off at all the unnecessary changes to the standard, and drop it. ISO has provided no compelling argument to do otherwise.

And remember, this ISO Survey only shows data before the full impact of the new ISO 9001 transition deadline is felt. The next few years are likely to show a massive US decline in ISO 9001 certificates, assuming the CBs don’t again falsify their data. The Oxebridge model predicts that given the massive unpopularity of ISO 9001:2015, the US will fall to only 10,000 certificates by the year 2020; by 2010, Oxebridge predicts the US will drop below 10,000 certificates, the first time since 1995, ensuring that ISO 9001 is all but irrelevant within the country’s economy.

Prior predictions of these drops were made after the 2000 release and 2008 release, and were accurate, although sometimes off by one year; Oxebridge had previously predicted the drop seen by 2010, imploring ISO to take action to improve its standards development process; ISO refused. Oxebridge then published its controversial Public Call document in 2013, calling on ISO to stop development of ISO 9001:2015 in order to gauge user feedback first, warning ISO that publishing the document based on the unpopular “Annex SL” would ensure a decline in international acceptance of the standard. ISO rejected that argument as well.

The countries that lost the most certificates are a mix of early adopter Western nations and late adopter Asian countries. Romania led the pack, losing a whopping 8300 certificates, likely the result of some data glitch. France follows, with a loss of 4400, and Russia continues its bleeding by losing 4000; Russia once had a high of almost 30K, but those numbers were later adjusted by ISO when it was expected many were issued by unaccredited certificate mills. (This is not something ISO seems particularly concerned about doing for China, however.)

The USA falls in fifth place for the most certs lost, with Turkey in the sixth slot. This is unusual, because Turkey shows a dramatic increase in interest in ISO 9001, with a huge influx of users on the LinkedIn ISO 9001 Group coming from that country.

Beyond that, some of the Asian nations fall onto the list, including Malaysia, Indonesia and Singapore. In the 11th spot sits none other than Switzerland, ISO’s home country, which shows that ISO had not done a great job convincing people at home of using their flagship product.

Australia — always a reliable partner for ISO (some might say “shill”) — nevertheless lost 871 certificates, earning it 12th place in the losers list.

Typically, prior to a major new release, the world slows down on ISO 9001 uptake, as confusion and concern take hold, and people are afraid to implement ISO 9001 if a major revision is only going to force them to re-implement a year or two later. ISO had been telegraphing the new version as early as 2012, and by 2013 it was in full PR swing, along with the pre-determined (and totally arbitrary) “September 2018” transition deadline. This means that this latest ISO Survey data would be showing some impact from that marketing, as companies slow down their adoption in anxiety over the new release. It also means that next year’s ISO Survey data will show the inevitable beginning of the long downward spiral. It is unlikely that even the dubious numbers coming out of China will save it.

With China now officially holding the Chairmanship of the IAF, there is no chance at all that the IAF will work with ISO/CASCO to require accurate data reporting as a part of CB accreditation, either. China seeks to undo the “made in China” stigma, and the nation’s accreditation body — CNAC — is legally required, under law, to serve the Chinese “state” first, and the ISO certification community second. (I’ll have more reporting on this shortly.) As a result, China has a national interest, enshrined in law, to ensure the world thinks Chinese quality is the best, and thus there will be no work done by China to ensure the IAF gets its house in order, since doing so would impact the most on itself. So things are likely to get much, much worse at IAF, making us long for the quaint days when it was just ANAB’s Randy Dougherty using the post to ensure his relevance in business by inventing positions for himself out of thin air.

It’s already showing its head, as the numbers become less and less reliable and more and more confusing with every new ISO Survey release, but ISO will only be able to contain the PR damage through outright falsification, and no longer mere spin. In prior years, ISO would issue press releases that essentially fibbed — a lot — about the numbers, or focused on total certificates (including standards beyond ISO 9001) to make the growth rates appear higher. They’re still at it, of course, but now the numbers are getting just outright weird, and ISO has no reason at all to want to publish accurate data.

The important thing to remember is that ISO is only a publishing company; they do not develop standards. ISO facilitates the development of standards done through the labor of unpaid volunteers, and it then charges those volunteers (through their Member Nations) a fee to participate in this lopsided arrangement. ISO then takes the intellectual property of those volunteers and prints books, retaining 100% of the revenue for itself.  That ISO has hoodwinked the entire world into believing it “develops standards” is a testament to its aggressive and successful marketing machine.

So the ISO Survey data is suspect, but as I said, it’s all we have.