The US defense contractor Bradken Inc. avoided corporate criminal prosecution by paying $10.9 million after it was discovered to have falsified metallurgical data on metals used in naval submarines between the years 1990 through 2017. At the same time, the company held ISO 9001 certification by SAI Global Assurance throughout the period.

SAI merged with a prior registrar, QMI, so earlier certificates may have been issued by that company. Despite the scandal, SAI still lists Bradken as certified to the quality management system standard.

The crime was uncovered when an employee found that the company’s Tacoma plant had been falsifying steel strength test results for decades. The actions were attributed to the company’s Director of Metallurgy, Elaine Thomas. Thomas has been arrested and faces trial for criminal fraud against the US government.

According to her LinkedIn profile, Thomas held positions in Bradken since 1977.

Despite having uncovered the crime internally, Bradken then lied to the government by falsely claiming they were innocent mistakes. It was only revealed later to have been criminal fraud on the part of Thomas. As a company, Bradken escaped criminal prosecution by paying the US government a $10.9 million settlement. 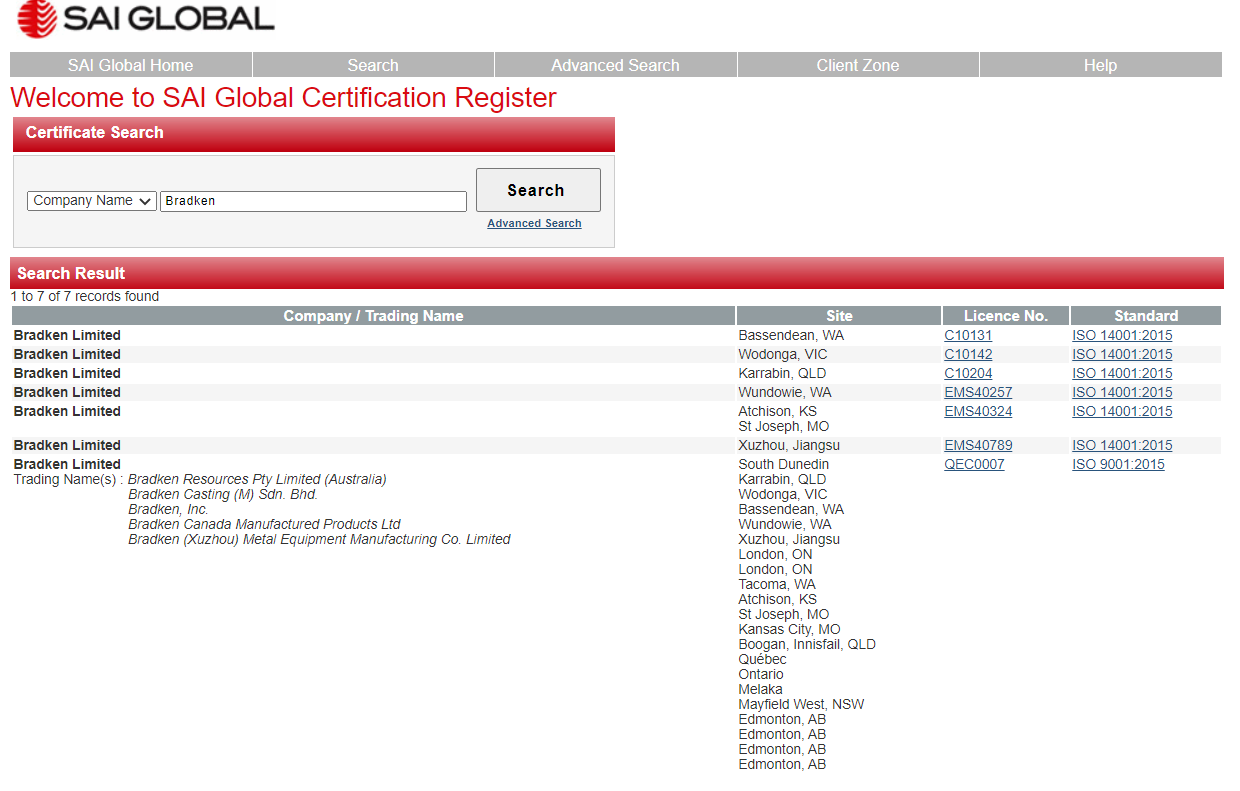 SAI records for certification of Bradken. (Click to enlarge.)  Source.

The plant in Tacoma would have undergone at least 27 annual audits by SAI and/or QMI. Online reports indicate the location has at least 500 employees, meaning that each audit would have required at least four “man-days” of auditing, for a total of 108 audit days at least during that period. Nevertheless, it appears that at no time did SAI ever uncover the falsified data, despite being required to audit the clauses of ISO 9001 related to inspection and test results.

Likewise, at no time did Bradken’s internal audit apparently uncover the fraud.

It is thus curious as to why SAI has not de-certified the Tacoma plant, given the high profile arrest and pending trial, and public reporting on the scandal.

The certificate issued to Bradken and published within their Quality Manual was signed by SAI’s Global Head of Assurance Services Duncan Lilley and David Crow, the General Manager for Australian Operations. That certificate includes the Tacoma location in its scope.

According to SAI’s official registry of certifications, the Tacoma plant was first certified in September 1986, and then most recently certified in June of 2019. The current certificate is due to expire in March of 2021.

It is not clear how SAI certified the company to ISO 9001 in 1986, since the standard was originally published a year later, in March of 1987.

SAI Global is accredited by ANAB, a member of the IAF.

In 2016, the US Dept. of Defense found over 40 major AS9100 nonconformities at Pratt Whitney, and yet the company maintained AS9100 certification by SAI.

Arrests were made in 2018 when it was discovered that workers at a Corpus Christi Army Depot had falsified test data related to helicopter blades. That location also held, and continues to hold, AS9100 certification issued by SAI Global.

In 2018, an aircraft repair station in Arlington TX had its FAA certification revoked for improper activities. The company held ISO 9001 from SAI at the time, but it is not clear if that certification was revoked as well.

Neither ANAB nor the IAF has ever investigated SAI for improperly granting certifications to the companies named, nor for continuing to certify them after scandals and arrests were made. SAI had its accreditation temporarily suspended in 2018, but for reasons surrounding an insufficient number of auditors and scheduling issues.

Recently, the head of aerospace for SAI Global stepped into scandal when she claimed that SAI auditors are “moving away from” recording evidence, an apparent admission of SAI’s open violation of accreditation and auditing rules.

Oxebridge has pressed the International Accreditation Forum to ensure bodies under its control comply with accreditation rules, and deny certification to companies who are proven not to comply with standards. The IAF has resisted such efforts, and taken no action at all on the matter.

[David Banghart assisted in this report.]