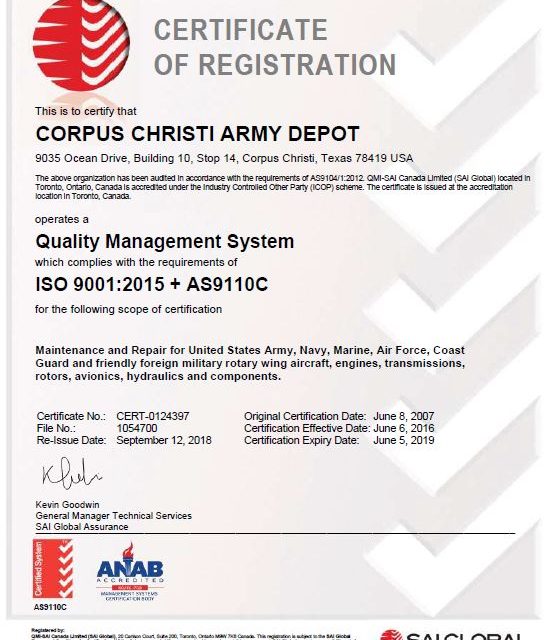 Two employees at the Corpus Christi Army Depot were arrested on charges they knowingly falsified repair data on UH-60 Blackhawk helicopters, allowing nonconforming rotor blades to pass inspection. At the same time as the falsifications were underway, CDAC held AS9110 certification by SAI Global, and despite the scandal the certification has not been suspended.

An indictment filed in the US Southern District Court of Texas charges two CDAC employees with the crime, which appears to have occurred during a period from January 2012 through October 2014. If convicted, the two face 10 years in Federal prison and fines of up to $250,000.

The IAQG OASIS database shows that CDAC has been certified to AS9110 by SAI Global (formerly QMI) since 2010, and holds a current certificate that is valid until 2019. During the period of the records falsification, CDAC would have undergone at least three or four audits by SAI Global auditors. The arrest appears not to have triggered any special audit or temporary suspension of the CDAC AS9110 certification. The certificates issued by SAI are accredited by ANAB, an IAF member accreditation body. 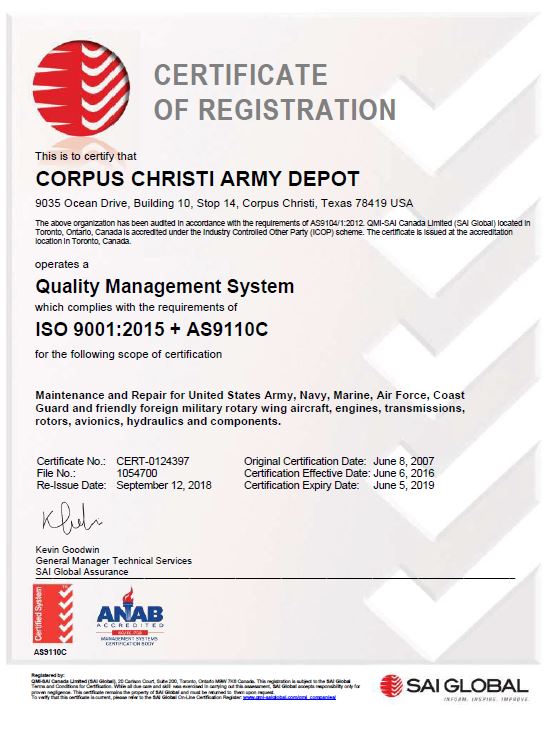 ISO, IAF and the accreditation and certification bodies routinely deny any responsibility for scandals or crimes committed by their certified companies, claiming their audits and auditors cannot uncover fraud. The CDAC certificate issued by SAI includes no such caveat, and instead states CDAC “operates a Quality Management System which complies with the requirements of ISO 9001:2015 + AS9110C” for its scope of aircraft maintenance operations. Both ISO 9001:2015 and AS9110 Revision C include mandatory requirements that records be maintained of inspection results, and such records are required to be audited by SAI at applicable surveillance and recertification audits.

The US Department of Defense Inspector General’s office has conducted multiple AS9100 audits of aerospace manufacturers and found dozens of major nonconformities, despite all of the companies holding certificates issued by ANAB-accredited certification bodies, and each of the companies remaining certified even after the DOD published its findings publicly.

The inability of ISO and AS certification bodies to root out defective products, fraudulent reporting and malpractice by their customers is becoming an increasing problem, but one the industry has refused to take action on. Consistently, Oxebridge has found that not only do “bad actor” companies hold certifications during such scandals, the CBs then refuse to take appropriate actions to ensure the problems were resolved even after the scandals were reported in industry or mainstream press.