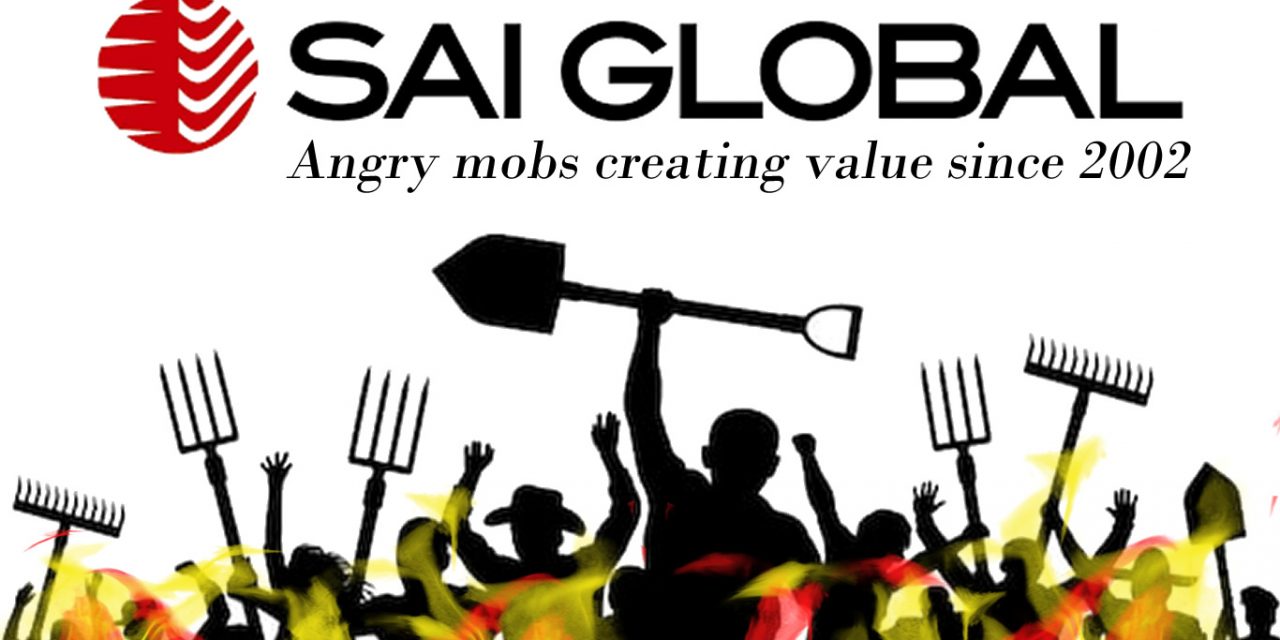 It’s no secret that the accreditation bodies such as ANAB and UKAS are beholden to the certification bodies (CBs) they accredit, and will do little to enforce accreditation rules lest they lose that lucrative monthly revenue. What’s not as well known, however, is how within each CB the executive staff is held hostage by an increasingly mob-like pool of auditors, who run roughshod over the rules.

Now meet Deann Minamino, the “Aerospace Global Scheme Owner” (giggle) of the certification body SAI Global. You may remember SAI as the registrar that lost its accreditations for a while due to its inability to do the one thing it’s supposed to, and actually conduct audits. They’re also the gang who hired Paul Simpson for five minutes, allowing him to fail upwards and take over the ISO 9001 crafting subcommittee at TC 176 as an apparent reward for bungling the job. SAI continued to issue AS9100 certs to Pratt Whitney even after the US Dept. of Defense reported dozens of nonconformities, as well as having certified a number of Chinese companies who were later found selling fraudulent products to US aerospace companies like Moog and the US Army Depot at Corpus Christi.

Oh, yeah, and their’s was the auditor who fell into an angry, homophobic rant while arguing for more collusion between consultants and registrars.

So, you know… that SAI Global.

Minamino’s entry into the AS9100 Clown House Hall of Fame comes as she issued a declaration saying that AS9100 auditors don’t have to record evidence of interviews anymore, because apparently there were mobs of auditors with pitchforks and stern emails outside her office.

The issue came after a company faced a handful of relatively innocent minor nonconformities, but which were largely bogus. In the findings, the auditor cited records from one year, claiming they violated procedures written a year later; this would have literally required the use of time travel to fix correct.

After being confronted (in OASIS), the auditor then claimed — only in emails, not in actual official OASIS filings — that his findings were based on an undocumented “conversation” he said he had with the Quality Manager, who then vehemently denied the conversation ever happened.

So I was brought in to help, and escalated this to Minamino, who — after all — “owns” SAI’s global aerospace scheme (giggle).  I challenged Minamino with this (emphasis from the original):

As for his recollection of verbal comments, if [the auditor] had additional verbal evidence from the client (verbal testimony) then that should have been put into the NCR under the objective evidence portion. This is a common mistake, and causes grief for auditors: they fail to record verbal testimony as valid evidence, and then it becomes he said / she said afterward. The NCR must stand on its merits as it’s written. If it’s poorly written, well that’s on SAI. As much as AS9101 has rules that [the client] must follow re: opening meetings, response times, etc., SAI must follow the rules of AS9101, too, for writing NCRs. These rules are important, and this case shows why.

Minamino decided to skip her meds that day, and dug in instead. In one of the most insane CB comments ever, she just tossed out the entire notion of recording evidence of verbal testimony:

In regard to the auditor recording the name of the person who gave “verbal testimony”.  Over the last several years, auditors have migrated away from providing the name of the interviewee as it was misused by organizations, viewing it as an individual’s non-conformance, rather than the process or the system, which is what the scope of the audit entails.  Between the evidence that is cited from each process and notes taken by the organizations audit escort(s), there would be adequate traceability within a compliant system to determine the individual(s) involved if it were necessary.

As you saw, I never demanded the SAI auditor put the “name” of the person into the record, but did require that SAI capture the alleged “verbal evidence” which SAI had suddenly hung its hat on. Yet again, a CB uses the old trick of rephrasing the complaint, and then responding to their false paraphrasing.

Worse, both Minamino and the auditor refused to ever update OASIS with an official record of their alleged “conversation.” That alone says a lot about their own confidence in their position.

But look at her statement more closely. First, Minamino is acknowledging that SAI’s adherence to accreditation and auditing rules is not determined by its management, or even her as the “Global Aerospace Scheme Owner” (giggle), but by the auditors, who she says “have moved away from” recording this evidence. I guess we are supposed to ignore the fact that CBs are supposed to manage the auditors, not the other way around.

Meanwhile, the accreditation standards have something different to say about this. Both ISO 17021-1 and AS9101 — which define mandatory requirements for any accredited AS9100 registrar — require that any nonconformity include a description of the objective evidence found to support the claim the company is not conforming. Here’s ISO 17021-1:

That standard then goes on to require that the methods for gathering evidence “shall include, but are not limited to: a) interviews.”

Given that much of an audit is conducted through interviews with staff and top management, it goes without saying that “verbal testimony” is the second-most important form of evidence required, second only to documented information. Minamino wants all of that thrown out to defend her shitty auditors, who apparently have her in thrall and hiding under her desk.

Not quite done, Minamino then put the requirement for audit evidence back on the client, making me wonder just what the fuck anyone is paying SAI Global for. Minamino wrote that the client could use “the evidence that is cited from each process and notes taken by the organization’s audit escort(s)” to justify the nonconformity.

That’s not how auditing works. You don’t send auditors in to write bullshit, then later try to defend said bullshit by saying, “you check your notes, because I didn’t take any.” The accreditation rules require the CB to capture evidence, not the client.

Oh, and of course ANAB was kept in the loop throughout this, and did exactly nothing to correct Minamino, giving her a green light to ignore both the letter and spirit of auditing rules. Because, presumably, SAI’s check cleared that month.

The story has a happy ending, though. The client put just enough words on paper to close the NCRs, then fired SAI and transferred to Dekra, where they haven’t had these problems. So whatever Minamino thought she was doing to support her mob of auditors backfired, because her auditors now have one less client to audit. If she keeps this up, SAI won’t need auditors since they won’t have clients.