The US Air Force’s Chief Information Officer Lauren Knausenberger and Chief Software Officer Nicolas Chaillan must resign immediately due to their active role in the perpetual scandals embroiling Platform One and the overall culture of toxic infantilism and disrespect for the law.

Oxebridge has already filed two ethics complaints against Chaillan, a French transplant and alleged “friend of Jared Kushner”, for multiple instances of bullying critics, threatening to use “DOD lawyers” to sue private citizens for defamation, and other allegations of abuse of position. An official USAF investigation was then launched, for which I personally provided evidence.

We later learned this wasn’t the first such complaint against Chaillan. Previously, it appears that Chaillan was protected by former Assistant Secretary of the Air Force for Acquisition, Technology & Logistics Will Roper, who actively worked to scuttle complaints against Chaillan. In at least three reported cases, Roper failed to report problems even when he was in the room witnessing Chaillan’s misbehavior firsthand. Roper has since gone into the private sector, leaving Chaillan with one less ally. That vacuum now appears to have been filled in by Knausenberger, who volunteers defenses for Platform One unprompted, and who then reaps personal and professional reward in exchange.

Since our original filing, nearly a dozen whistleblowers have come forth providing evidence — including significant documentation — showing Platform One, Chaillan, and his former sidekick Robert Slaughter were involved in repeated incidents of potential intellectual property theft. We have found examples where P1 leadership bragged — in writing — about its methods for taking partners’ source code and deliverables, incorporating them into P1 development products so that the original code could no longer be identified nor extricated. The partners would then be “kicked the fuck out,” leaving their IP behind and unpaid for.

It’s not clear how many companies found their work appropriated by Platform One, but the number is troubling. When complaints were raised, Chaillan — again, propped up by Roper — would then threaten to use DOD lawyers to sue for defamation. (Here.) (Chaillan appears unaware that the US government cannot sue private citizens for defamation, because First Amendment. In fact, Chaillan made the same threat to me, in a bungled attempt to have me retract the original Oxebridge ethics complaint. I did not.)

Beyond the alleged theft of source code, Platform One has leaned heavily into an infantilized atmosphere that rewards the largely young, white, male, “cyber bro” crowd that comprises their remaining supporters. As a result, Chaillan and P1 brand their work as “PlatformFun” appropriating imagery from Star Wars. Without the permission of Disney or the US Forestry Service, Platform One has used taxpayer dollars to create products, media, and “SWAG” featuring the likeness of Baby Yoda and Smokey the Bear. (Here, here.) These actions were then quickly defended by Knausenberger, who insisted the usage was legal, directing Slaughter to provide a legal basis for the infringement; Slaughter responded by citing debunked theories regarding the movie Spaceballs. (Here.) Slaughter, it hardly needs to be said, is not an attorney.

Upon further discovery, it was learned that Platform One used taxpayer funds to create Baby Yoda “challenge coins,” which it then used to reward people for promoting the program and its pals. One of the recipients was none other than Knausenberger, raising questions of whether the inappropriate gift amounted to a bribe. For her part, Knausenberger has become one of the leading defenders and promoters of both Chaillan and Platform One.

Not content there, Slaughter then sent the dubious coins to anyone who voted for Knausenberger for the Washington 100 award. (Here.) Platform One cultists responded, and Knausenberger won that award. When asked if this was “buying votes,” Slaughter openly admitted, “yes.” This, again, raises questions about the use of taxpayer dollars to help boost the career of a USAF executive in return for use of her office in promoting Platform One.

(In either a tone-deaf move, or one that shows just how contemptuous Slaughter is of good behavior, one of the LinkedIn posts related to the coin featured images of Colombian drug lord Pablo Escobar from the movie Narcos. Here.)

Sources also claim the same was done for those that voted for Chaillan, who also won similar industry awards; a challenge coin featuring Chaillan is reported to exist for this purpose, but I have not seen it firsthand.

Likewise, P1 circulated “SWAG Boxes” to supporters, allegedly paid for through a Small Business Innovation Research (SBIR) grant, which — if proven true — would be illegal.

Perhaps the worst conduct by Chaillan is related to his repeated abuse of office, wherein he openly threatens — often in writing — the careers and Federal bid availability, of people or companies critical of Platform One. In case after case, we found Chaillan taking even minor criticisms of Platform One personally (here), and then “going nuclear” by threatening to deny companies access to DOD contracts and even working to have individuals fired from their companies.

Such behavior is well known in USAF circles, even as Roper allegedly worked to protect Chaillan. At one meeting with IBM executives, with Roper at his side, Chaillan was reported to blurted out that the execs “don’t know what the fuck they were talking about.” In another meeting, Chaillan melted down against a high-ranking USAF officer, again in front of Roper.

Despite multiple complaints and probes, the behavior hasn’t stopped. In a recent interview with Air Force Magazine, Chaillan gave quotes that essentially called US Space Force head General John Raymond a liar. He was reportedly reprimanded for that, but still holds his position. Even with Roper gone, Chaillan mysteriously remains protected from accountability.

This behavior would not surprise anyone, as Chaillan’s social media is rife with this sort of aggressive, narcissistic, and abusive posture. His Twitter feed sees him attacking government agencies and individuals, while retweeting vote conspiracy theories (here), as well as racist (here, here), sexist (here), and homophobic (here) content from Trump circles, and even questioning the President under whom he works (here, here). Chaillan has repeatedly posted publicly about whether he should leave the USAF or work from within, positioning himself as some sort of “deep state” actor against President Biden (here).

Multiple witnesses have come forth and provided evidence that appears to show Chaillan had “inserted” staff into two competing devsecops programs: the US Space Force’s Kobayashi Maru and USAF’s Kessel Run. Once his people were in place, those staffers were alleged to have “broken into” the related systems or performed other work to destabilize them. At that point, they would report back to Chaillain, who would use the information to argue that Kobayashi Maru and Kessel Run were inferior to his Platform One program.

Apart from Chaillan’s promise to deny access to USAF and DOD contracts to his critics, some awards appear granted outside of the proper competitive bid process. One source reported that the company Dark Wolf Solutions was given “one of the first seats in P1 devsecops.” That company is run by Bo Slaughter, Robert Slaughter’s cousin. [See update below.] Other allegations — still being vetted — suggest that Chaillan or others steered contracts to “friendly” companies, subverting fair competition rules. Again: we’re still researching this point, however.

(And, of course, Bo Slaughter is seen on LinkedIn accepting challenge coin gifts from Robert Slaughter, and thanking Knausenberger at the same time. Here.)

There are so many additional claims of “contract steering,” it’s a matter that has delayed filing of the next Oxebridge complaint, because of the labyrinthine complexity. But a rough review points to a pattern emerging.

Finally, there is mounting evidence that Platform One has engaged in outright and consistent misappropriation of funds. To be fair, this is a complex issue that Oxebridge and its sources are still researching in detail, if only to organize the documentation. But one example came after P1 accidentally sent an email to users with the subject line “The Great Purge.” The message then directed P1 subscribers that “the time has come to pay,” accidentally exposing a scandal that many subscribers had not paid for the program. Platform One had to officially apologize on LinkedIn for the email, but Chaillan then chimed in with his usual unapologetic, toxic personality. In his response, he essentially admitted — in public — to misappropriation of funds, admitting that that Platform One’s services were being used by “freeloaders” funded by a “bulk purchase” by the Advanced Battle Management System. Under Federal law, funds provided by a program office may only be used for that program office, and not for any outside funding. 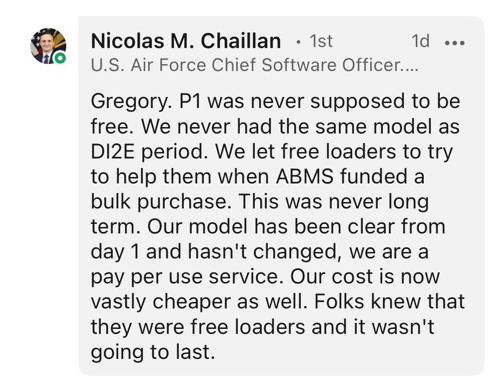 The costs associated with various Platform One tools are astronomical to taxpayers and program offices. Sources report the access fees for P1’s “Party Bus” option costs $2000 per seat per month, with a program office like Kessel Run requiring as many as 500 seats. All told, the various offerings inside Platform One have generated millions of dollars, with that money coming from taxpayers through program offices to the USAF. The results of Platform One are also controversial, dubious, and not universally agreed as being particularly useful.

Federal law also requires the government to use commercially available products in lieu of spending Federal dollars to develop new ones; in general, Platform One seems to ignore this regulation entirely opting to create products out of thin air when existing commercial ones may already exist.

The evidence against Chaillan has grown too large to ignore, and Knausenberger’s culpability must be considered as well. For this reason, both Chaillan and Knausenberger must resign immediately. Such resignations should not stop any current investigations into potential violations of law by the two, nor should they prevent the processing of future complaints.

As for Will Roper, it seems he got out early enough to warrant any further investigation, but his actions should be looked into as well, even if retroactively.

(1) Sources now say that Bo Slaughter and Rob Slaughter are not related, but that this was a joke made between the two on social media. If so, then this lessons the concern related to Dark Wolf, but still highlights the tendency by Rob Slaughter to make light of corruption (in this case, publicly embracing nepotism), and to lean into unprofessional conduct as means of infantilizing the Air Force.

(2) A USAF ethics expert and attorney has weighed in and assures that the “gifting” of challenge coins to USAF officials would constitute a violation under the DOD code of ethics and gift acceptance policy. It is worsened by the fact that the coins were submitted by subordinates and representatives of companies seeking contract work under USAF and P1.

UPDATE 28 August 2021: Based on new information and evidence, the paragraph on  “Sabotaging Competing Systems” was added.