[This story is breaking, and will be updated as details emerge.]

The US Air Force’s Chief Software Officer Nicolas Chaillan has resigned after pressure from USAF brass, multiple sources have reported to Oxebridge. The resignation came just hours after an editorial posted on the Oxebridge site called for his resignation, alongside that of USAF CIO Lauren Knausenberger, for their role in cultivating an “overall culture of toxic infantilism and disrespect for the law” at the USAF’s Platform One program office.

It is believed that Chaillan’s last day was Friday, August 28th.

One half-hour after a LinkedIn post by Oxebridge founder Christopher Paris announcing the resignation, Chaillan confirmed it with his own post. 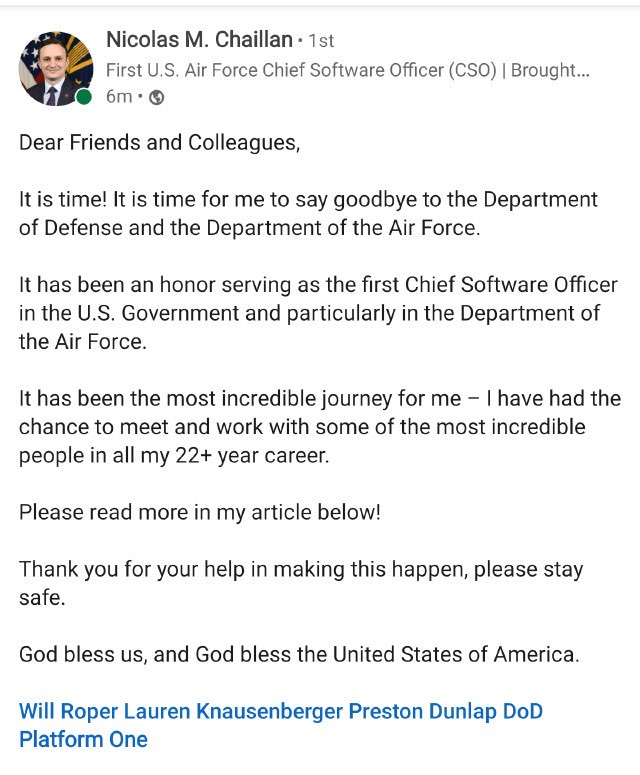 The resignation was likely prompted by derogatory comments made by Chaillan against US Space Force General John Raymond in an interview for Air Force Magazine, in which he implied Raymond was a liar. But the timing also suggests the Oxebridge editorial had a role to play in pushing the USAF’s hand in the matter.

Rather than fire Chaillan outright, USAF leadership allowed him to resign, a move that sources say may present new risks. One source claimed that Chaillan intends to “burn it all down to the ground,” apparently referring to USAF.

In an extended exit post on LinkedIn, Chaillan appears to begin to do just that, continuing to attack the DOD and blame his own leaders:

I told my leadership that I could have fixed Enterprise IT in 6 months if empowered. Yet with my 22 years of expertise running IT innovation, I was underutilized and poorly leveraged by the DOD, as most of my time was wasted trying to convince folks to engage with me and consider more relevant and efficient solutions, while I watched as they continued to deliver capabilities that do not meet the basic needs of our warfighters. The DoD should stop pretending they want industry folks to come and help if they are not going to let them do the work. While we wasted time in bureaucracy, our adversaries moved further ahead.

He directly names Lauren Knausenberger as his cohort in his exit piece.

Sources say that Chaillan was seeking a position with defense contractor Booz Allen Hamilton, but has left the USAF without any offers.

Oxebridge continues to prepare one or more formal complaints to Congress and DODIG alleging criminal and other violations within the Platform One program, while under the leadership of Chaillan and former Assistant Secretary of the Air Force for Acquisition, Technology & Logistics, Will Roper. Roper had already left the USAF to take up a position as CEO of drone manufacturer Volansi. The complaints will also allege Knausenberger’s role in enabling the Platform One scandals, and the personal benefits she received for doing so.

Oxebridge has a prior ethics complaint already filed with USAF investigators.