Chaillan, a civilian employee of the USAF, is a frequent poster on LinkedIn, and occasionally argues openly with critics. In a recent discussion posted by a third party, Chaillan discussed his office’s work on the “Platform One” cybersecurity initiative. That thread was then commented by John Weiler of the CMMC Center of Excellence (CMMC-COE), who disparaged the Platform One program. The two engaged in an admittedly unprofessional exchange, leading Chaillan to accuse Weiler of “defamation,” “blackmail” and “extortion.”

The thread was deleted by the original poster, but Chaillan then opened a new thread openly attacking Weiler, and indicating his intent to use “DOD lawyers” against Weiler:

I have logged the discussion and I will be sending this information Monday to DoD lawyers. Obviously, while I am not a lawyer, it is my personal opinion that this is evidence of blackmail and extortion.

Extorting the US government is a Federal felony, and would be prosecuted by law enforcement and only after an arrest order was issued. It would not be litigated in a civil suit, nor would “lawyers” be the first people to contact in such a case.

Chaillan then repeated the “extortion” claim, without framing it as an opinion, and doubling-down on his accusation of defamation:

It isn’t a personal defamation. He is disparaging and defaming Platform One and its people which is a DoD program of record. Additionally he is extorting the government for money in order to stop his toxic behavior.

Falsely accusing someone of a crime, and stating it as a fact, is a civil tort violation referred to as “defamation per se.” In such cases, the victim can obtain a damages award from a court without having to prove financial losses occurred.

Oxebridge founder Christopher Paris then opened another thread, neutral to both parties but raising the “chilling” aspect of Chaillan’s threat:

This is chilling. It seems a civilian government official with the US Air Force is threatening to use “DOD lawyers” against a private citizen for defaming the government.

In his thread, Paris declared he was “neutral” and was seeking someone to “explain this drama.”

Chaillan then commented in the thread attacking Paris, and falsely accusing him of being “partners” with Weiler, again stating this not as opinion, but as fact:

Neither Oxebridge nor Paris have any business or other relationship with Weiler or his various companies. In the past, Paris had criticized a post by Weiler related to his CMMC-CEO. This led to a few phone calls between Paris and Weiler, but the two have since “buried the hatchet,” according to Paris.

The moves led Oxebridge to file an official ethics complaint against Chaillan with the USAF General Counsel’s office, alleging Chaillan was abusing his office by threatening private citizens.

It is clear that Mr. Chaillan has conflated his work with Platform One with his own personality, and intends on using Federal resources to attack critics and private citizens who comment negatively on it, seeing them as attacks on himself. His behavior represents gross abuses of power and violations of multiple USAF policies on official conduct.

Chaillan then followed up with increasingly unhinged threats to Mr. Weiler, promising to utilize the resources of the US Dept. of Defense against him. 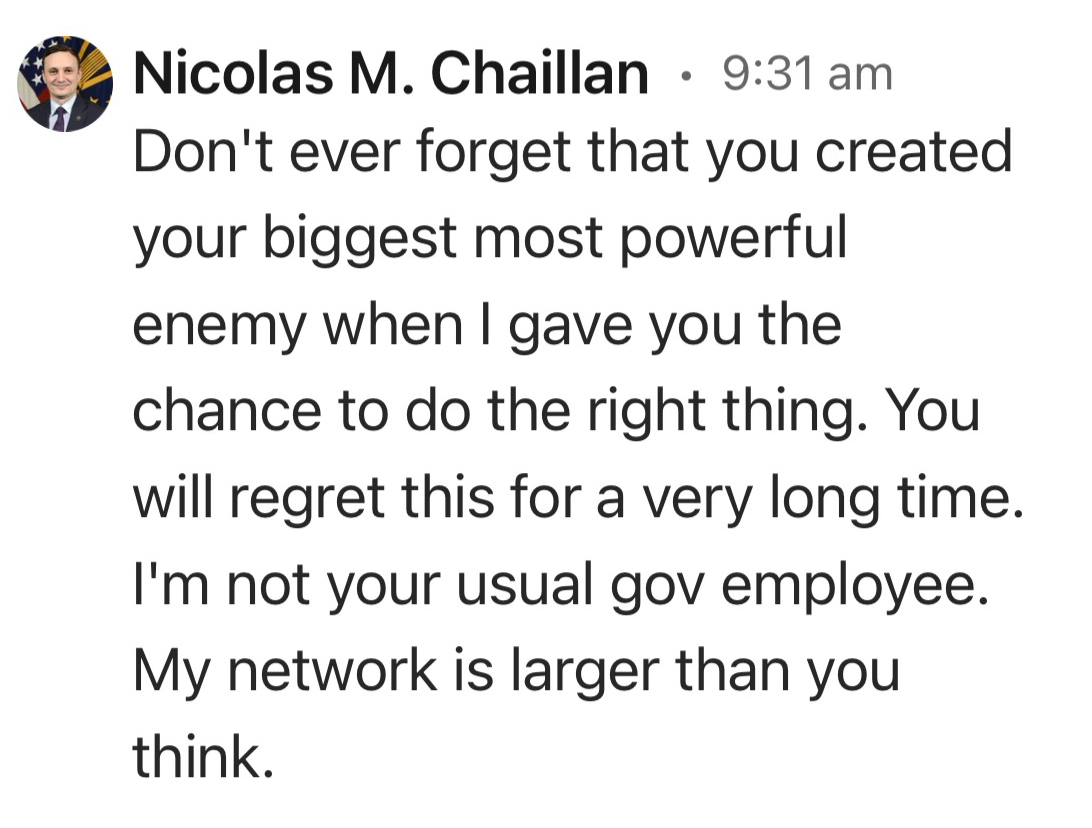 Chaillan has previously posted controversial comments on LinkedIn. In one, he declared that the Defense Acquisition University’s training programs were “a waterfall pile of junk” that “puts our nation at risk.”  In one post, he posted a poll asking what LinkedIn users felt he should do “including moving on before I get fired.”

Oxebridge has experience in lawsuits involving defamation and extortion, and has won multiple cases for these matters. In one case, Oxebridge was awarded $1.6M by a Federal court, while another case related to both charges was settled by the defendant as part of a confidential settlement agreement for an undisclosed sum.

UPDATE 15 December 2020: Four additional whistleblowers have since come forward, each providing accounts and documentation where Mr. Chaillan appears to threaten individuals or entire companies, typically as a response to a petty internet feud. The evidence appears to show a pattern by Mr. Chaillain wherein he uses his government position and threats of “DOD lawyers” to intimidate whistleblowers and critics.

Oxebridge is now collecting any such accounts, and victims of the USAF Office of the Chief Software Officer can submit their materials to oqr@oxebridge.com, as new ethics complaints are prepared.

Those concerned about retaliation may submit documents anonymously, through mail services such as Protonmail. Oxebridge’s secure email address is:

UPDATE 17 December 2020: Mr. Chaillan has threatened to use an “army of lawyers” against Oxebridge, while attempting to have the ethics complaint “withdrawn.” Oxebridge is refusing to withdraw the complaint. 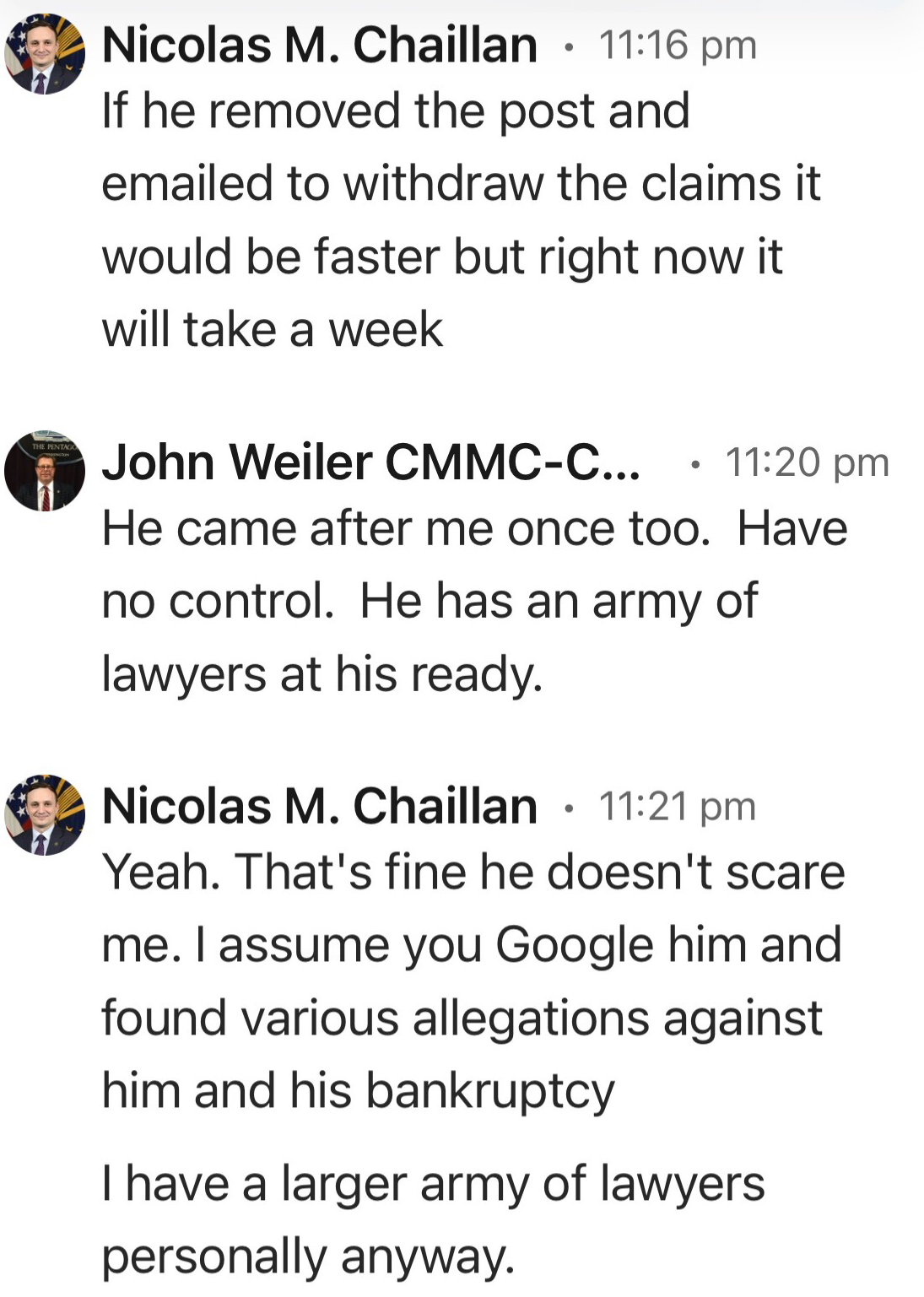