Three more Malaysian glove manufacturers have been banned from exporting products to the United States by the Customs and Border Patrol due to evidence that the companies use forced labor. All three held multiple ISO certifications issued by bodies accredited by UKAS, raising questions as to how so many SGS auditors could have failed to report the crimes.

Three subsidiaries of Supermax Corporation were found to be using slave labor to manufacture nitrile and other gloves, a market which has seen a dramatic increase since the COVID-19 pandemic. Supermax Glove Manufacturing, Maxwell Glove Manufacturing, and Maxter Glove Manufacturing all hold ISO 9001 and ISO 13485 certificates issued by the certification body SGS, which itself is accredited by the United Kingdom Accreditation Services (UKAS). In order to obtain these certifications, auditors from SGS would have had to conduct on-site audits of the facilities and staff of all three companies, meaning auditors were likely to have witnessed the criminal treatment of workers first-hand.

The companies appear to also hold certifications from the Malaysian certification body SIRIM, which is also accredited by UKAS.

Oxebridge verified the certificates through SGS’ official website as well as that of IQNet. 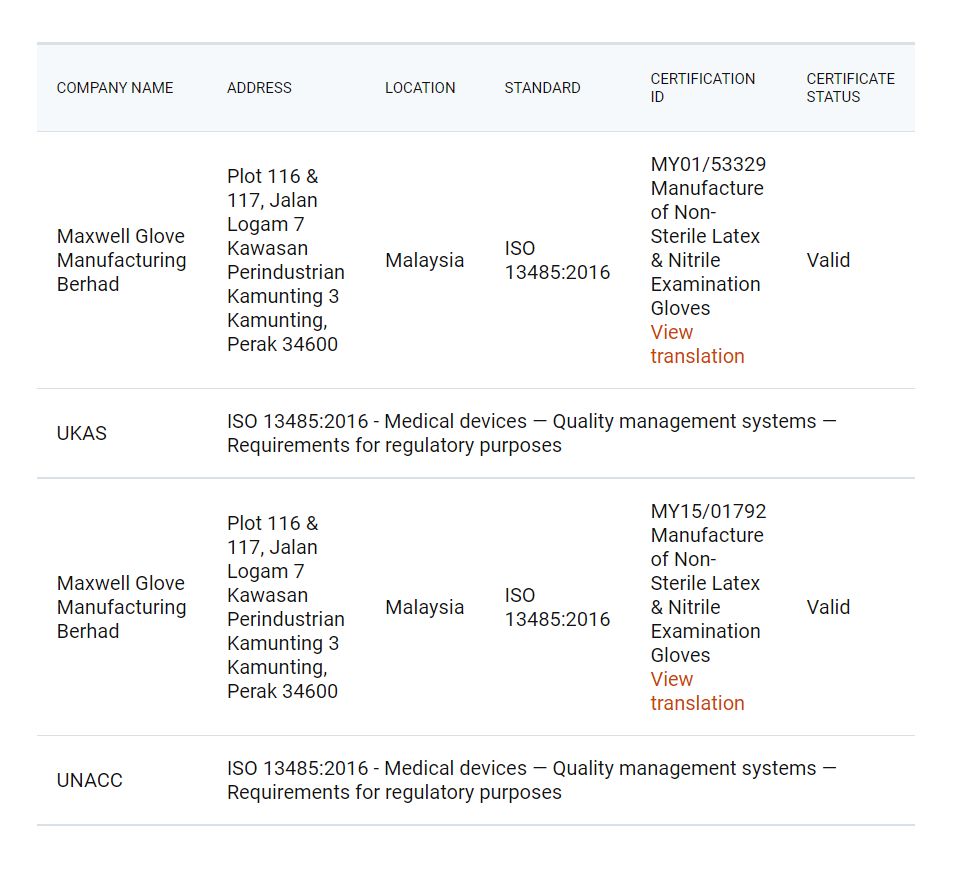 The Supermax products will now be withheld at the border and not released into the US market.

The latest ban represents another blow against the reputation of UKAS and the ISO certification scheme. The massive Malaysian glove manufacturer Top Glove faced a similar ban, despite holding ISO certifications issued by SGS and SIRIM, and accredited by UKAS.

The Malaysian plants of another glove manufacturer, WRP Asia Pacific, are certified to ISO 13485 and other standards by BSI, which is also accredited by UKAS.  The Guardian newspaper quoted a witness who said, “the overall working conditions [at WRP] were some of the worst he had ever seen, where factory temperatures were up to 70C for those working near ovens and more than 3,000 workers were housed in a hostel built for 1,800.”

The Malaysian firms largely abuse foreign workers from Nepal or Bangladesh. There are an estimated two million migrant workers subjected to forced labor in the country.

The firm FGV Holdings Berhad was also banned by the US due to its use of forced labor, with that company partly owned by the Malaysian government. Ironically, FGV holds certification to ISO 37001 for an “anti-bribery management system”, also issued by SIRIM and accredited by UKAS.

Another holding company, Sime Darby Berhad, was also banned by the US while holding “13 ISO certifications” according to the LinkedIn profile of one employee. At least one of those certifications is ISO 37001 for anti-bribery management systems, although Oxebridge could not verify the issuing certification body.

SIRIM is Malaysia’s primary certification body, and is operated by the Malaysian government under the Ministry of International Trade and Industry. It is largely thought to be one of the most corrupt certification bodies operating in the Asian region today. SIRIM has refused to address complaints related to its operations in Malaysia, which are expected to have enabled the use of hundreds of thousands of slave laborers in that country. SIRIM is headed by Dr. Ahmad Sabirin bin Arshad, a former California State University graduate and aerospace engineer.

UKAS is supposed to audit certification bodies like SGS and SIRIM to ensure they are conducting on-site audits, and holding clients accountable to “statutory and regulatory requirements.” Routinely, however, UKAS-accredited certificates have been found to be issued to companies found to have flouted international laws and openly committing crimes.

UKAS CEO Matt Gantley has refused to comment or take action on the scandals, and continues to accept payment for the issuance of certifications to such companies. UKAS earns its revenue through accreditation fees charged to the companies by the certification bodies such as SGS or SIRIM, who then pass the fees along to UKAS.  The criminal enterprises then use the UKAS logo to legitimize their operations and enable easy export worldwide.

The certificates also bear the logo of IQNet, which has likewise refused to take action.

Bodies like SGS and UKAS escape oversight by government regulators, as they use political connections to expand their hold over international trade while ignoring crimes committed by their certified clients. Governments, including that of the US and UK, then claim the privatization of accreditation by such bodies allows for a reduction in taxes. This arrangement, favored by politicians, enables international crimes to be committed with impunity while under the logos of major bodies like UKAS and ANAB.

Malaysia’s government has promised to take action against the slave trade within its borders, but has historically ignored the issue since it is directly involved in the practice.