Marketing by the US accreditation body ANAB now includes claims that ISO certifications and accreditations can reduce insurance claims. The claims were widespread in the late 1980s and early 1990s, but then were recalled after they were proven wholly untrue. A new wave of marketing by ANAB and some other bodies appear intent on reviving the debunked claims.

Ironically, the claim by ANAB is, itself, likely invalid. 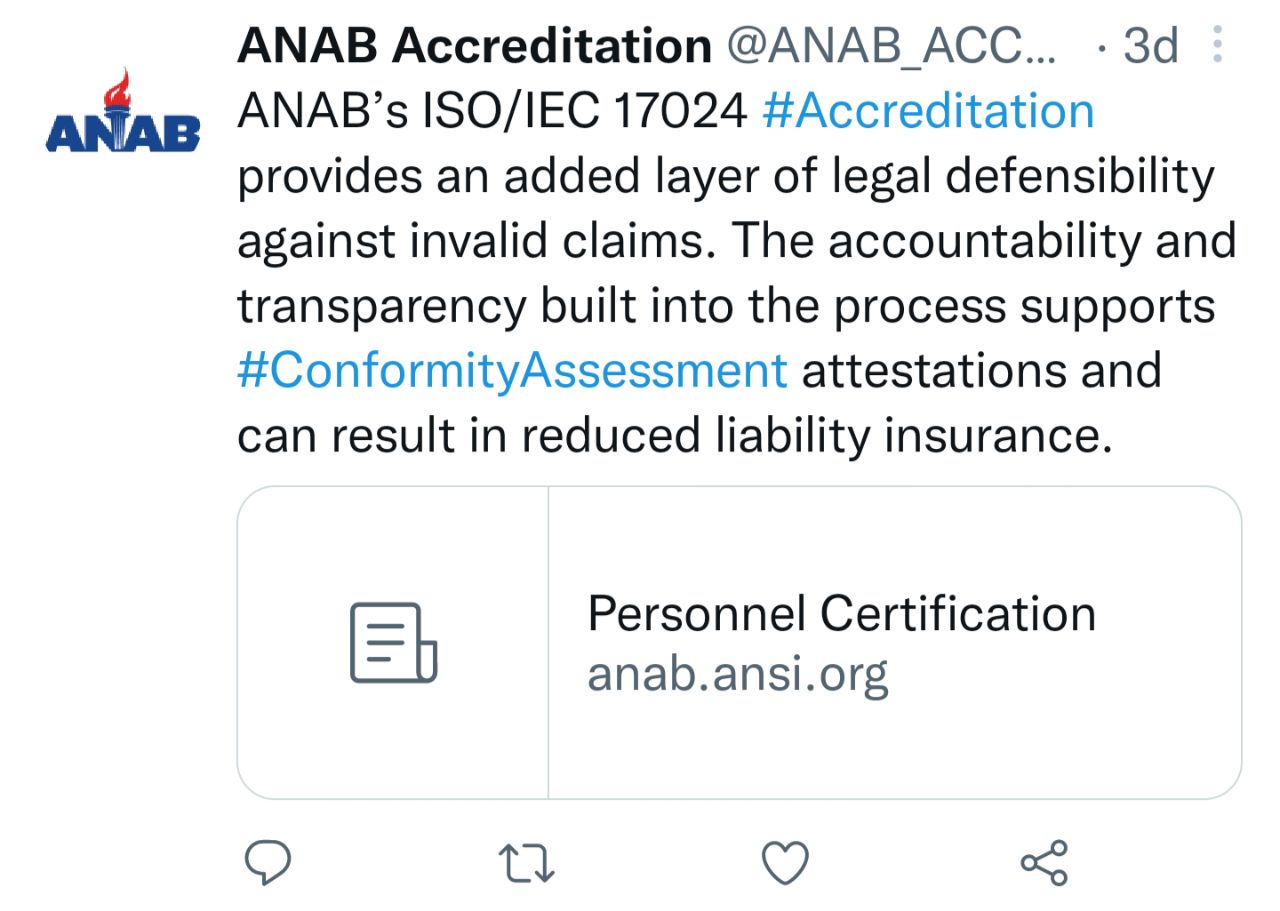 Another page on the ANAB website discusses accreditation in general, not specifically that of ISO 17024, and raises the bar further by stating as fact that “[ANAB accreditation] reduces liability insurance and legal costs.”

Insurance policies and premiums are developed by actuaries, who use advanced math to identify risks facing industries and thus establish baseline costs, and underwriters who review and approve policies. In order for any ISO certification to result in premium reductions, actuarial studies and underwriter approvals would have to be obtained in advance.

Over a 6-month period in 2019, Oxebridge spoke with a number of insurance companies, actuaries, and underwriters. None could find support for blanket claims that ISO certifications would result in a reduction of premiums. In fact, multiple sources reported that nay such blanket reductions would be “impossible” given rules that govern actuaries. One representative from an underwriter told Oxebridge:

There would need to be statistical studies showing widespread patterns in the reduction of risk due to ISO certifiations. These would have to show demonstrable reductions in accidents, recalls, etc., over widespread populations of companies. Then, they would have to be repeated for each certification, as you couldn’t issue a blanket statement about “ISO certifications” as a whole.

ANAB, alongside its certification body client Smithers, tried to make the same argument in 2014 for the widely-panned certification scheme SN9001, for “snow management companies.” Smithers and ANAB insisted that SN9001 would reduce premiums for snow removal contractors, based on a business relationship the firms had with a single insurance provider, Mills Insurance. The company eventually had to admit that SN9001 would not automatically reduce premiums, and that only after the industry saw improvements as a whole might SN9001 justify reductions. That never came to pass, as SN9001 never became a viable certification scheme.

The claims have also surfaced in the ISO consulting community. A consultant with the UK consultancy ISO Quality Services Ltd., wrote a guest blog post for the UK insurance company Sutcliffe Insurance Brokers entitled, “Why Does ISO Certification Reduce Insurance Premiums,” The article then went on to claim that, “ISO certification … may even be the only way to get a quote” from an insurance company.

There is no evidence that any insurance company requires ISO certification as a precondition for obtaining a quote on policy prices.

When asked directly if ISO certifications are a guarantee to reduce premiums, Sutcliffe’s management admitted that it isn’t that cut-and-dry saying, “there is no simple answer to your question.”

The fact that one of the world’s largest accreditation bodies is again repeating a debunked claim is troubling, said Oxebridge founder Christopher Paris. “You want ANAB to lead by example, to be the high watermark on ethics and trust. But we constantly see them doing the opposite, squandering their reputation by engaging in the worst kinds of conflicted, shady behavior.“