If you ever wanted to know who to blame for the trainwreck that is ISO 9001:2015, look no further. US TAG 176 member Lorri Hunt just stepped up.

The American Quality Institute, for which she acts as Conference Organizer, just named her “one of the top, if not the top, US delegate to TC 176.” Have a look at this recent spam mailing that went out (click to enlarge): 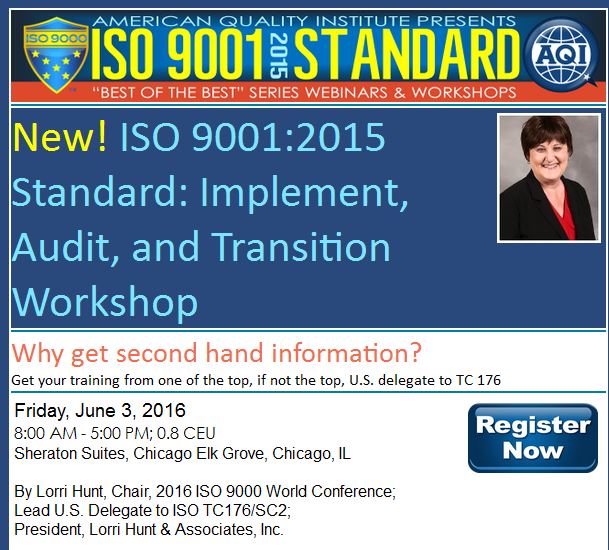 Since, as I said, she’s AQI’s conference organizer, there’s a good chance she just gave herself the title of “top US delegate to TC 176”, meaning she just spit in the face of her mentor, Jack West. I hope, for Jack’s sake, her saliva tastes like bourbon.

Remember, the US had nearly two thirds of its opinions on ISO 9001 overruled by ISO, meaning that Lorri Hunt led the US delegation to a stunning global defeat. So, to be completely accurate, she would be the top US delegate who led the US to world humiliation. Thanks, Lorri; few could have done a more spectacular job at ruining the US reputation abroad.

It’s not with a quantum of schadenfreude that I sit and watch the US TAG 176 leaders eat each other alive to gain market position, all while further ensuring they eventually get held accountable for bastardizing the ISO 9001 scheme. What’s next? I vote Thunderdome style cage match!

Disgusted? Drop Lorri Hunt a line and tell her so.