ISO Survey 2019 Analysis: The Bleeding is Slowing, But Patient is on Life Support 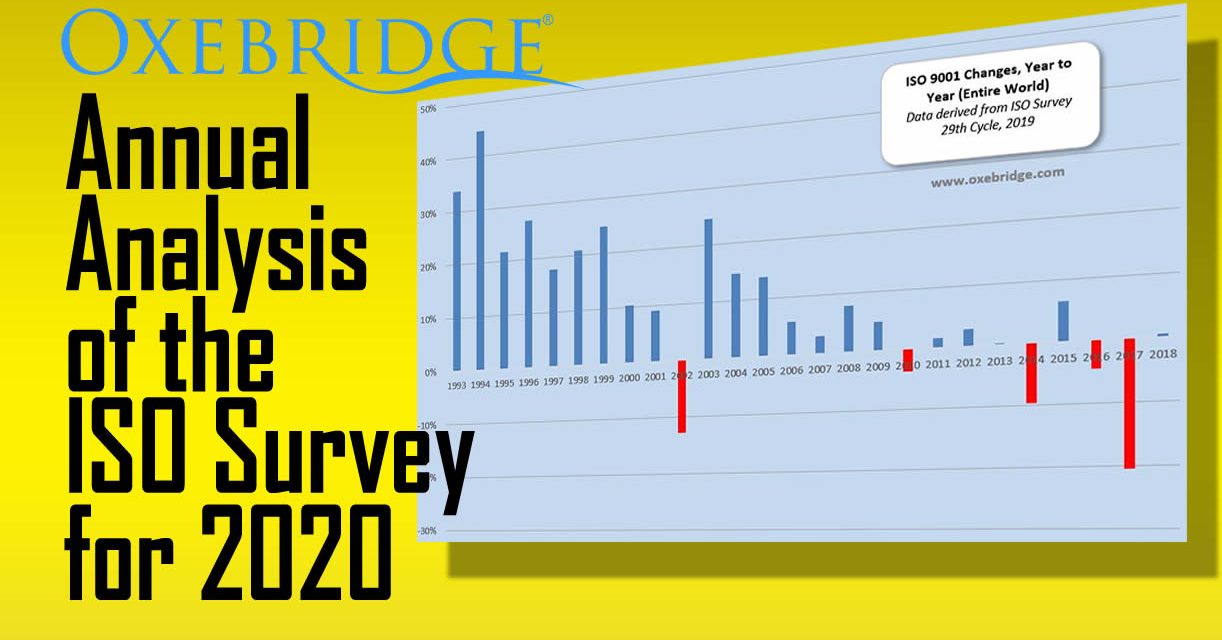 Once again, ISO has released its annual “ISO Survey,” which reports on total certificates worldwide for standards such as ISO 9001, ISO 14001 and others.

The latest report includes data as of 2019. The Survey was originally launched in 1990 as The Mobil Survey, published by Mobil Oil Co. ISO took over the reporting in 1996, and has published it consistently ever since. Originally the surveys were labeled as “cycles,” a naming convention which ISO dropped, but which I like to maintain for historical purposes — the 2019 data represents the 29th Cycle by that naming system.

Every year since 2002, Oxebridge has released a corresponding “ISO Survey Analysis” report which tries to look past ISO’s generic (and often misleading) press release blurbs, to see the real trends behind the data. While ISO has changed its reporting methods over the years, Oxebridge has been carefully collecting the data since 1993, and then merges the data so that it remains consistent. That allows us to have more accurate trend reporting over the full period from 1993 to present.

The 2019 report must come with a huge sigh of relief for the sales guys at ISO, because it represents what may be a temporary stanching of the bleeding seen in recent reports, most dramatically witnessed from the prior 2018 report. Last year’s report saw the biggest drop in ISO 9001 certifications worldwide in the standard’s entire 33-year history, and saw total certifications fall to levels not seen since 2006. It appeared to be a disaster in the making, and all signs pointed to this year’s report simply showing more of the same.

ISO dodged a bullet, however, showing a modest 0.5% increase in ISO 9001 certificates since the last report. The total world figure — now at 883,521 certificates — represents at least an increase, rather than another drop. The numbers still remain below those of 2006, which had 896,905 certificates. ISO 9001 had peaked in 2014 when it had 1,113,272 certificates. ISO bragged constantly about having “more than 1 million” certified users of ISO 9001, something they haven’t been able to boast about since 2018, when it lost a whopping 179,448 certificates in a single year. 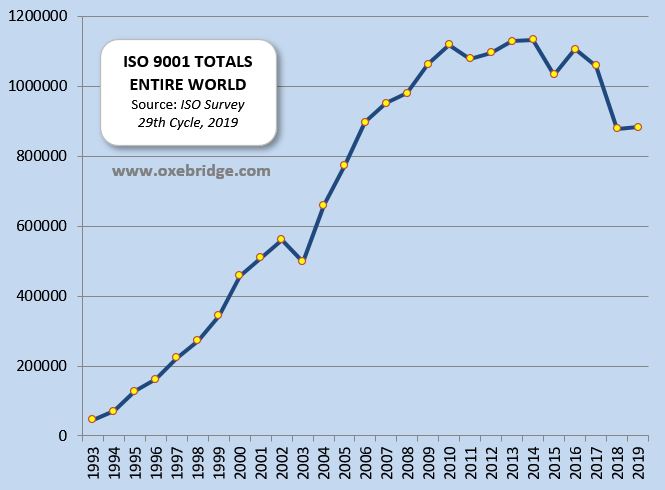 The reprieve is certainly temporary, however, as 2020 has brought on the COVID-19 pandemic, forcing many companies to abandon their ISO 9001 audits due to shortened staff, travel restrictions, and stubbornly-backward thinking by the IAF which insists on conducting a portion of audits on-site, despite health risks.

Last year, ISO attempted to mask its failures by deleting the historical data, and only providing a one-year snapshot. Presumably, they hoped you wouldn’t notice those high numbers from 2014, and thus might assume ISO 9001 is just doing fine. As expected, ISO has kept up this new approach, and is again refusing to report historical numbers, or even compare a single year-t0-year comparison between 2018 and 2019. Fortunately, Oxebridge has the data.

(I am frankly surprised ISO published the Survey this year at all, as I had predicted they would stop doing so in order to mask their failures entirely. Perhaps because the numbers saw a small uptick, they decided to run it after all? We will see if they shut it down in the future.)

Based on the long view look below, there are few ways to spin this, other than to say it seems impossible that ISO 9001 will ever regain the ground it lost since the 2006. 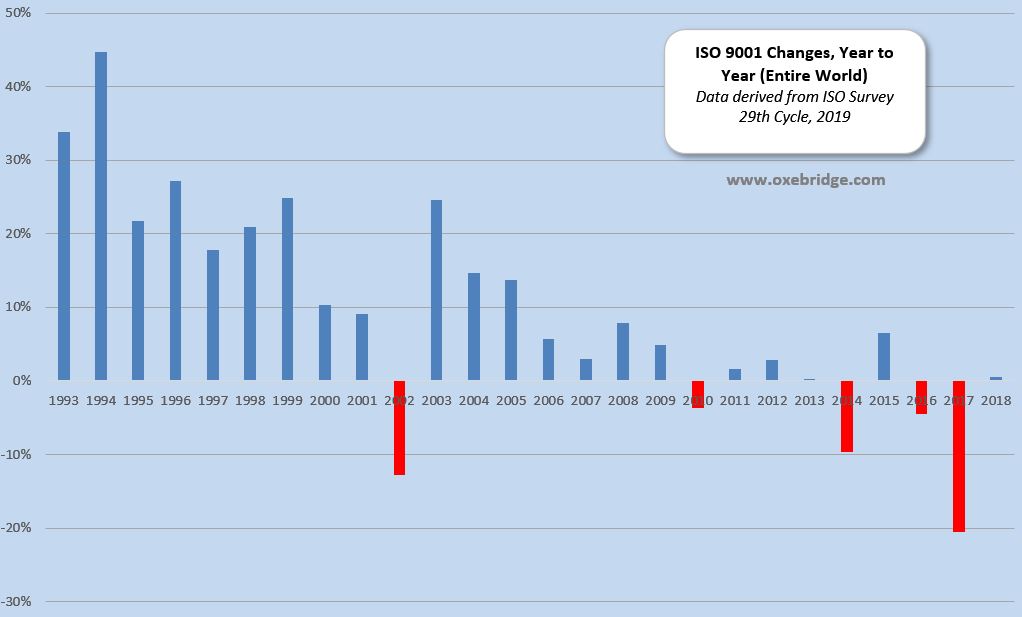 Many companies abandoned ISO after its craven attempt to republish the ISO 9001:2000 standard as an “amendment,” rather than a revision. Essentially, ISO polled users who said the prior ISO 9001:2000 version was acceptable as is, but rather than simply allow companies to continue to use it, ISO pushed out an “amendment” called ISO 9001:2008. This was simply a re-release of the 2000 version with a different date on the cover, but then ISO and IAF conspired to force companies to buy a copy of the “new” standard and undergo needless “upgrade” audits.  While the 2000 version was controversial enough, the ridiculous 2008 version proved people were just angry, and they voted by dropping ISO 9001 altogether. The standard has never fully recovered.

As you will see, ISO learned nothing. The same architects of ISO 9001:2008’s failure are still at the wheel, and plotting a similar money-grab for the next version of ISO 9001, too.

One of the fun traditions of the ISO Survey release is to see what nonsensical explanations the current ISO press flack will come up with in the obligatory “Explanatory” cover letter that accompanies the Survey. This year, spokesperson Laurent Charlet had this to say:

Similarly [sic] to the previous editions of the survey, the results show some fluctuations at the country level that are explained by factors related to the participation such as the non-participation of the some important certification bodies for those specific countries. In the 2019 survey this is the case for Bosnia, Korea, Japan, The Netherlands, Turkey, the UK and the US.

Those countries weren’t picked by random. While you can’t check this based on ISO’s one-year snapshot, by comparing the results between 2019 and the prior year, the following is the list of countries with the biggest losses: 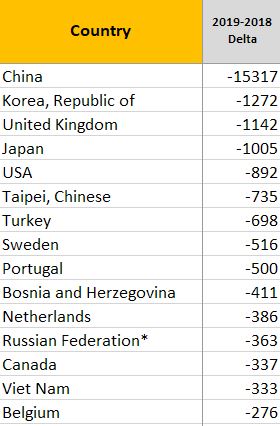 Notice anything? Every single one of the nations that Charlet claims reported “nonparticipation” also appears on the list of top certificate losers. Clearly, ISO is trying to explain away the losses as being the result of poor reporting, rather than actual product dissatisfaction.

I’ve written at length that ISO’s “nonparticipation” problem can be solved overnight by requiring CBs to report their data as a condition of IAF accreditation, but the parties are not interested in truthful reporting. Instead, the ISO Survey is a marketing tool, albeit an increasingly poor one.

ISO does provide some limited industry breakdown of certificates, using the (silly) IAF codes to do so. The numbers bounce all over the place year-to-year, so there’s not much trending one can do, but the overall data shows which industries are using ISO 9001 more than others.

We can see that machine shops continue to rule the scheme (13%) alongside electronics (9.5%) with “machinery and equipment” at 8%. Despite decades of attempts, ISO remains elusive in achieving any entry into the service industries, indicting the world still views ISO 9001 as a manufacturing standard.

Construction, previously a leader in the ISO 9001 field, lost a whopping 4,029 certificates in 2019, in another troubling sign.

The biggest growth was found in the expected places (machining grew by over 7,000 certs worldwide, and equipment by over 5,300), with “transport, storage and communication” coming in third with an increase of 3,195 certificates. That IAF code is so vague, however, we can’t be sure if it represents bus companies or internet providers.

What’s missing is data related to de-certification. In (some) prior editions of the Survey, ISO would report why companies had dropped their ISO 9001 programs. That data is no longer reported, so obviously we cannot provide any analysis of it. It’s too bad, because it provided some desperately needed information on what haters of ISO 9001 might be thinking. Without that information, there’s no way to win them back.

China Continues to Break Away

In prior years, China was the bulwark that presented ISO 9001’s numbers from getting too horrible. That started falling apart last year, and the trend continues with the latest Survey.

In 2019, China reported a loss of over 15,300 certificates. While that’s down from last year (China hemorrhaged over 97,000 certs in the prior report), it’s not good news. And this is pre-COVID, remember. 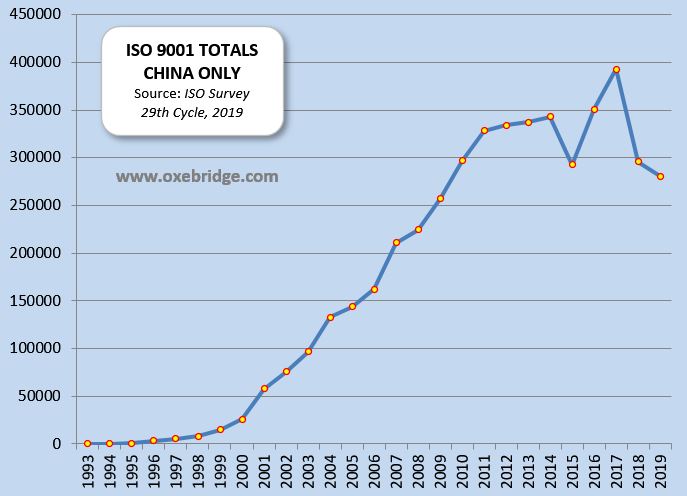 Besides China, ISO has hung many hopes on India, Asia and the Middle East. The picture here is a mixed bag.

India saw an increase of over 2,600 certs to reach 34,397 in total, which doesn’t seem too outlandish despite that country now leading the world in the proliferation of fake ISO 9001 certs. One would expect much higher numbers of the data had been corrupted with bogus certs.

Qatar reached an all-time high of 827 certificates, but one has to wonder how many of those were issued by Quality Austria, and may wind up being thrown out as the investigations continue against that registrar’s activities in Qatar.

The US bleeding has slowed, but it still continues to drip-drip-drip. Whereas last year’s report showed the USA losing 3,239 certificates, the latest report only shows a loss of 892. This puts the US’ total at 20,956, which is still a horrendous number. You have to go all the way back to 1997 — 23 years ago! — to find numbers this bad. 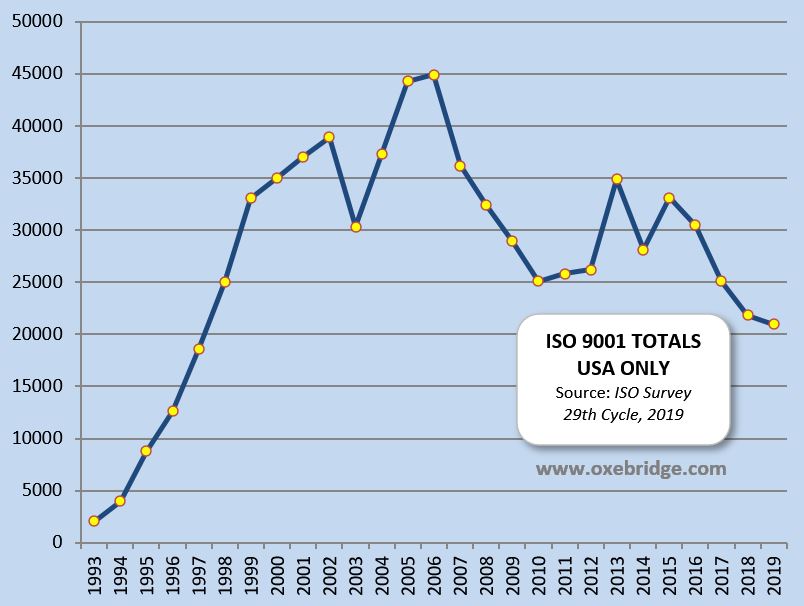 The US numbers last saw an increase (rather than a drop) back in 2015, but sources reported to Oxebridge that the data was intentionally spiked by two US-based registrars who faked their numbers to give ISO an artificial boost.  Since 2015, however, the US has been losing certificates like mad.

Last year we predicted the US would dip below 17,000, and that hasn’t happened, so there’s at least relief there. However, our model did not predict the COVID-19 pandemic, so we have to adjust for that. I’m still modeling that the US will drop below 10,000, but by 2022. ISO will only avoid this if, for some reason, COVID proves to have had no effect on ISO certifications… which seems implausible. 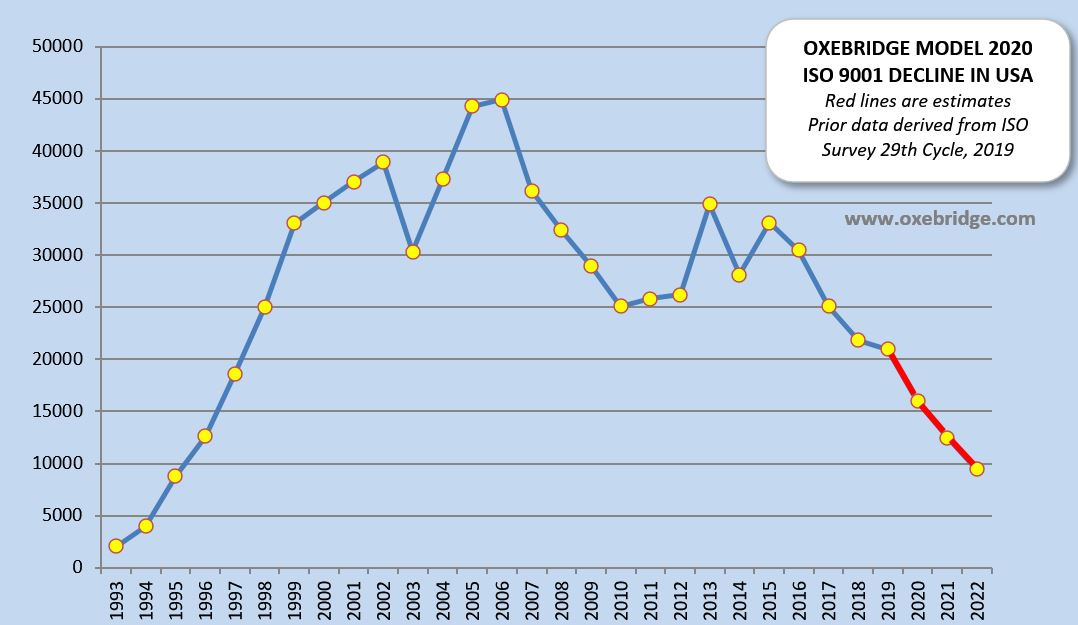 Comparing the US against Mexico and Canada, the North American picture looks like this: 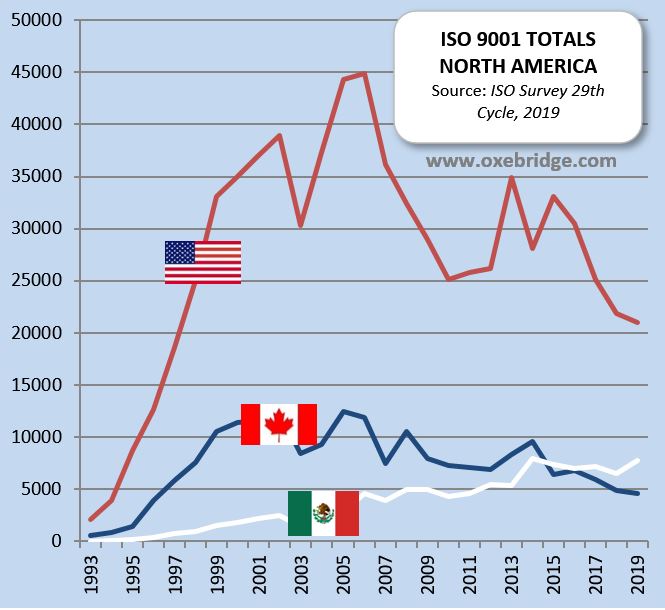 Italy and the Rest of Europe

Italy is a weird duck, in that its numbers have seemed artificially inflated for a decade or more. Then, dramatic course corrections took place starting in 2014, which appeared to be more due to improved reporting rather than an actual loss of certificates. (The belief was that Italy never had the certificates it claimed in the first place.) Now Italy is ticking back up again. 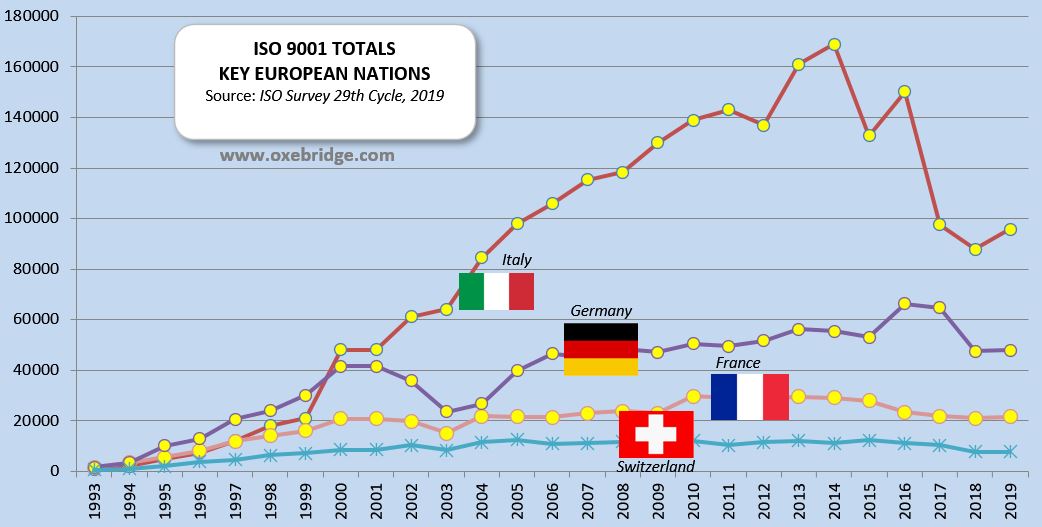 Germany, France and Switzerland are all monitored for overall European certificate health, and are basically flatlined. It’s fun to measure to Switzerland since ISO operates out of that country, and you’d think they’d have a better marketing machine there.

Everyone Cheer On Belarus

You have to hand it to Belarus, the former Soviet nation and current home of Europe’s longest- surviving dictator, Alexander Lukashenko. For reasons one can only guess, its numbers are going through the roof. Just look at this roller coaster: 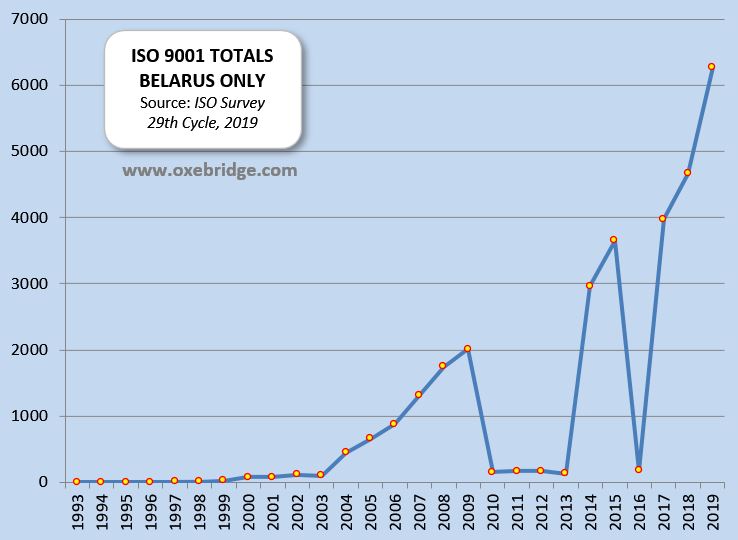 The nations with the most ISO 9001 certificates in 2019 were as follows:

That list is nearly identical with that of the prior ISO Survey, except for some minor pole position changes between the top ten.

The countries having lost the most certificates in 2019 are as follows:

While any increase at all is good news for ISO, the overall picture remains bleak. ISO has lost the world’s confidence in ISO 9001 certification as a tool to be used to improve quality — or merely to prove one’s system is worthy — and companies are clearly seeking other ways to address quality.

Unfortunately, ISO remains stubborn in its refusal to use the data to improve its product, even if that is what the text of ISO 9001 demands of others. The same people or architected this mess continue to hold positions of power — many of them promoted, in fact — and refuse to hand over the reins to folks who might have new ideas (ahem). Nigel Croft, Paul Simpson, Dick Hortensius, and their gang continue to tinker with a product that the world has rejected, and refuse to fix it. By all accounts Hortensius plans to revise Annex L will make things worse, as he’s playing with the idea of adding climate change into ISO 9001.

These guys can’t fix their own standard, and now they want to use it to fix global warming.

Here are a few of the prior Oxebridge analyses of previous ISO Surveys: