ISO has released its latest ISO 9001 User Survey in order to gauge support of concepts it is debating adding to the next edition of the standard. All users of ISO 9001 are urged to take the Survey, if only to advise ISO whether they think this path is a good one or not.

1.) For question # 10, do not select any of the “No” options, or you will not be able to give feedback on the standard. ISO does not (apparently) want specific details on content in the ISO 9001 unless you actually decided to implement it. Which is weird. 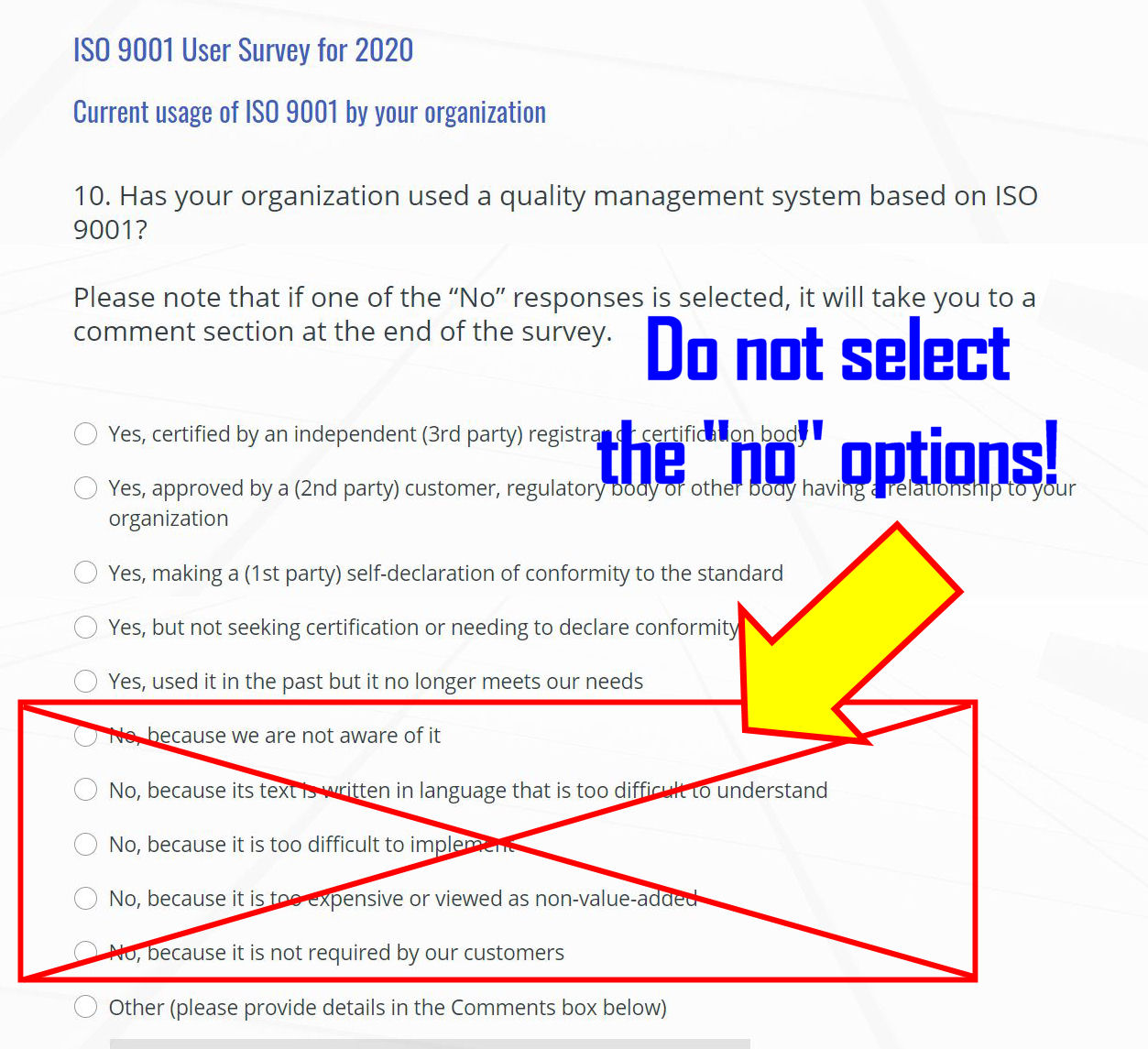 2) Be sure to press SUBMIT at the end, or your entire survey will be discarded.(I believe, in fact, you have to press it twice (once at the final set of questions, and once again at the very end.)

It’s worth pointing out that ISO has already spiked the results. The questions related to “Future Concepts” represent ideas that ISO TC 176 already determined — without user input — back in late 2019. These include injecting “ethics” into ISO 9001, which seems to be a foregone conclusion no matter how many people object to it.

The survey does not ask users what they would want to see, but only has people vote on their pre-determined concepts.

Making matters worse, some of the Future Concepts are largely nonsensical “boardroom word salad” phrases, which are not defined within the context of a QMS, such as “aspects of information,” “circular economy” and “demographic change.” A reference to “climate change” was injected as well, and it’s not clear if ISO is referring to global warming, or changes in the corporate business climate, such as competition or supply chain. 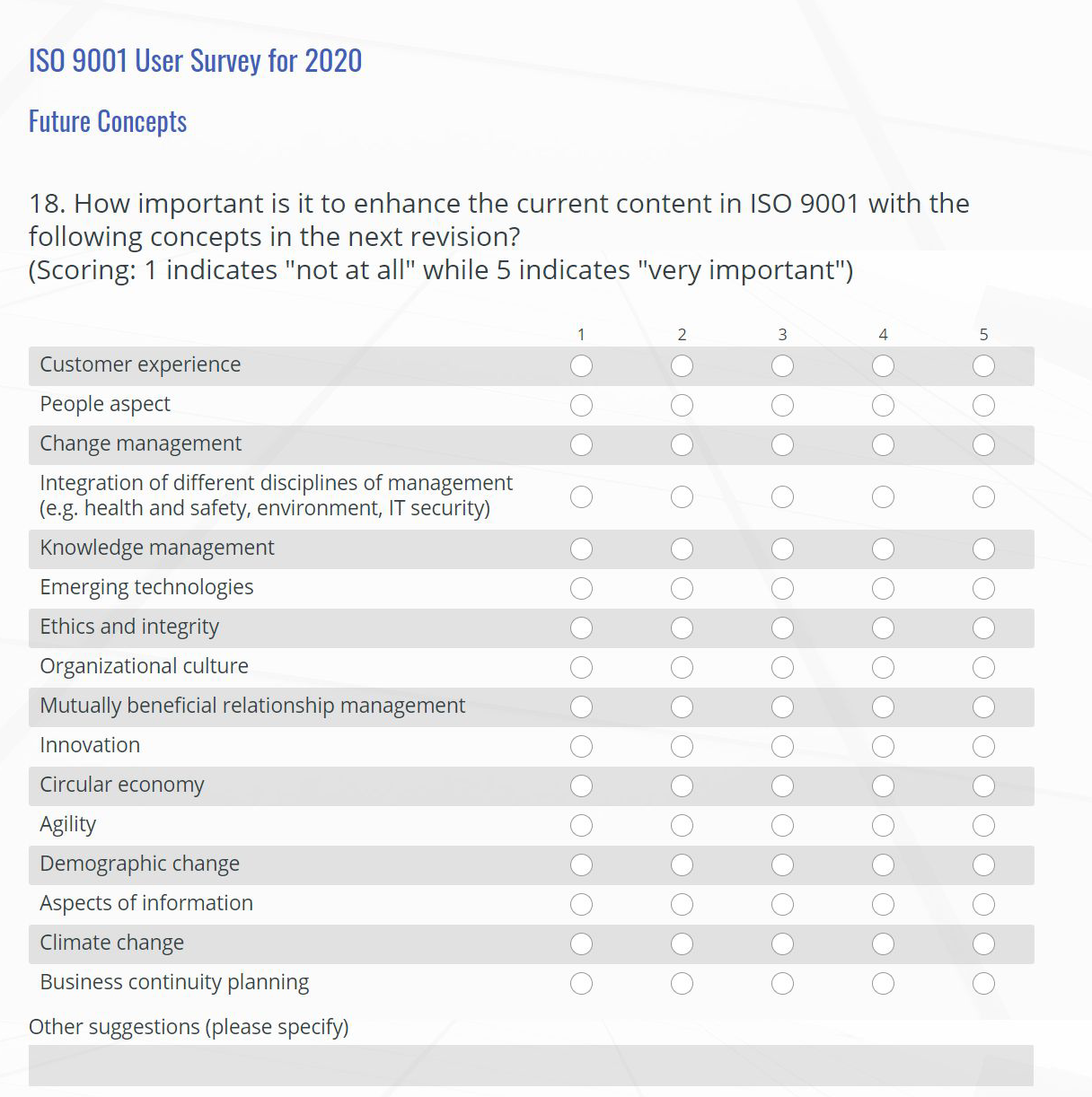 It’s clear that once again the TC 176 quality system committee is attempting another coup over all other management system committees, by trying to make ISO 9001 a single standard that usurps all others, including those for environmental management, occupational health and safety, information security, and more. The other committees are not likely to be happy, but it’s an old exercise that dates back to the late 1990s when ISO 9001 tried to merge with ISO 14001, and failed.

But the Survey isn’t binding, and ISO is under no obligation to do anything with the data. For the 2015 version of ISO 9001, ISO injected “risk” into the standard, even though it ranked fifth and sixth on different User Surveys. It then faced widespread criticism for the move, and even triggered internal revolts between various other ISO committees, including those on risk management. Despite this, ISO pressed ahead, and “risk-based thinking” has caused the standard to see widespread decline.

Much of this falls on the shoulders of a handful of ISO careerists, including the Netherland’s Dick Hortensius. He’s been unapologetic about rejecting both user feedback and evidence of declining ISO 9001 certificates, saying instead he takes his orders from “the Netherlands.” Nigel Croft, the inventor of “risk-based thinking,” has likewise refused to consider overwhelming feedback that shows the standard is being rejected internationally, as has Paul Simpson, the Chair of TC 176 SC 2, the subcommittee responsible for the ISO 9001 text. The head of the US technical advisory group for T 176, Alan Daniels of Boeing, has also reversed prior positions to try and represent users, and has become another willing toady for ISO, supporting Annex L and the “future concepts” approach.  Ironically, nearly none of the so-called “experts” on TC 176 have ever worked under a quality system that was certified to ISO 9001.

So it’s critical that users submit their responses to the User Survey, at least so there is a record for when, later, ISO ignores the input.

The same group of private consultants that are responsible for the disastrous ISO 9001:2015 continue to hold the levers of power over the next edition, a fact which is nearly guaranteed to further destroy the standard’s reputation, and push clients to alternative means of standardizing their quality systems.