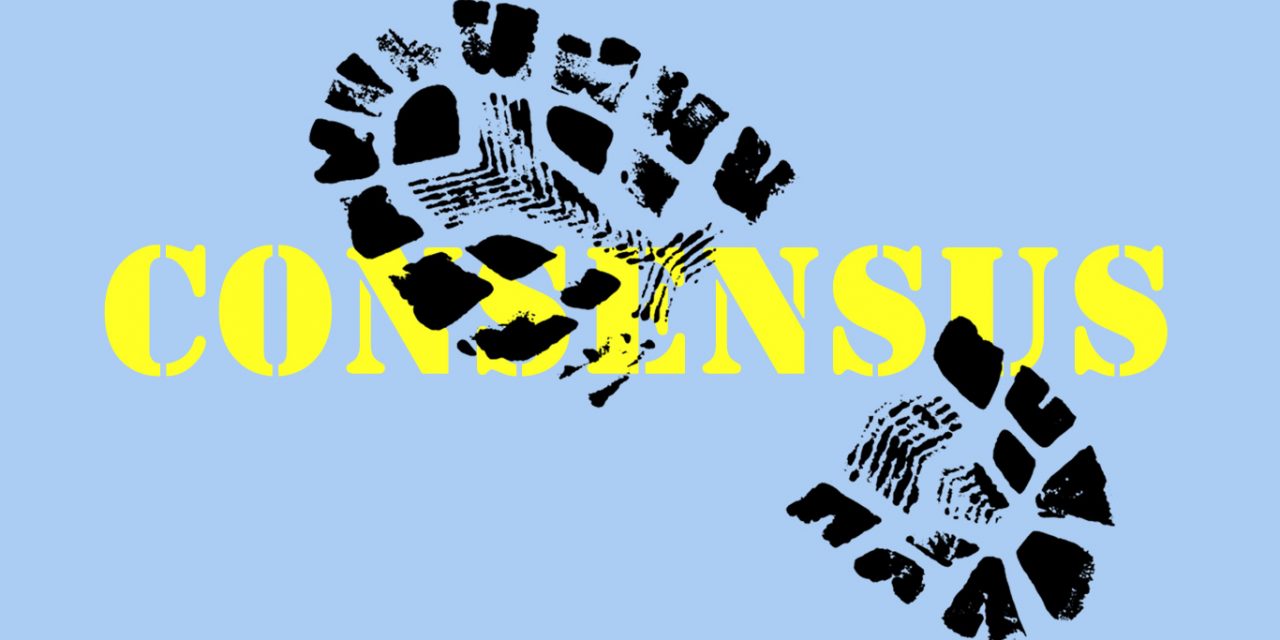 I’ve written at length about how ISO simply lies by telling the world it relies on consensus to develop standards. There’s no other word for it: it’s a baldfaced, brazen lie. See here, here, and here. Creepier still is how ISO simply re-defined the word “consensus” so that it means the opposite.

Now we have yet more evidence that ISO is allergic to consensus.

As we reported back in December, ISO suffered a setback in its plan to revise the ISO 9001:2015 standard when a majority of ISO member nations voted to retain the standard, as-is. ISO is dead-set on revising ISO 9001 no matter what, to incorporate changes in the Annex SL mandatory text, written by the ISO Technical Management Board.

As a recap, ISO standards are supposed to be written by Technical Committees (“TCs”) comprised of international delegates and industry experts. Instead, in order to get standards onto the ISO webstore faster, ISO has hobbled the TCs and shifted its development work to a non-elected “TMB” working group, led by the Netherlands’ Dick Hortensius. The TMB writes “Annex SL” text which is then forced into every ISO management system standard, over the objections of official TC members. In fact. TC members are prohibited from altering the text, and all comments on Annex SL are summarily rejected without processing.

The entire thing violates both ISO’s marketing, which claims its standards are developed under consensus by experts, as well as ISO’s rules of procedures. The TMB was never tasked with writing standards, but slowly has taken over the job with the blessing of the ISO executive in Geneva. The theory is that Geneva was frustrated with the slow pace of the Technical Committees. Slow standards development hurts ISO’s revenue.

For his part, Hortensius has been smug and non-apologetic, defending his role in dismantling consensus as being the product of a mandate from Amsterdam. Those who have worked with Hortensius attest to me that he cannot be negotiated with, and that his sense of self-righteousness is outright dangerous. But because he carries out the will of the ISO sales folks in Geneva, he’s been granted nearly unlimited powers.

Hortensius’ original Annex SL is largely thought to be the main reason the world has rejected ISO 9001 in such huge numbers since the ISO 9001:2015 standard was released. Nearly a third of the standard’s text was written by the TMB instead of TC 176, the committee responsible for writing ISO 9001. But ISO has gone all-in on Annex SL, and has no plan on stopping it.

Instead, ISO announced it was revising Annex SL, meaning that every ISO management system standard would have to undergo mandatory update. This contradicts long-established ISO rules which call for a “systematic review” (SR) vote to determine the need for revision. But, as we wrote here, the SR vote didn’t go well for ISO, and a majority of nations voted against revising ISO 9001. Normally, the SR vote would be binding, but ISO desperately needs to roll out the revised Annex SL text, especially in its flagship product, ISO 9001. So ISO has come up with a workaround. Buried in an ISO procedure is a stunning rule that essentially allows ISO to ignore international member votes entirely (emphasis added):

Typically, a decision as to the appropriate action to take following a systematic review shall be based on a simple majority of P‑members voting for a specific action. However, in some cases a more detailed analysis of the results may indicate that another interpretation may be more appropriate.

That language has existed in the official ISO rules since 2001, but was rarely invoked. But, of course, previous standards were written by TCs and not the TMB, and ISO never had a situation where it was demanding an update to a standard over the objections of world members. 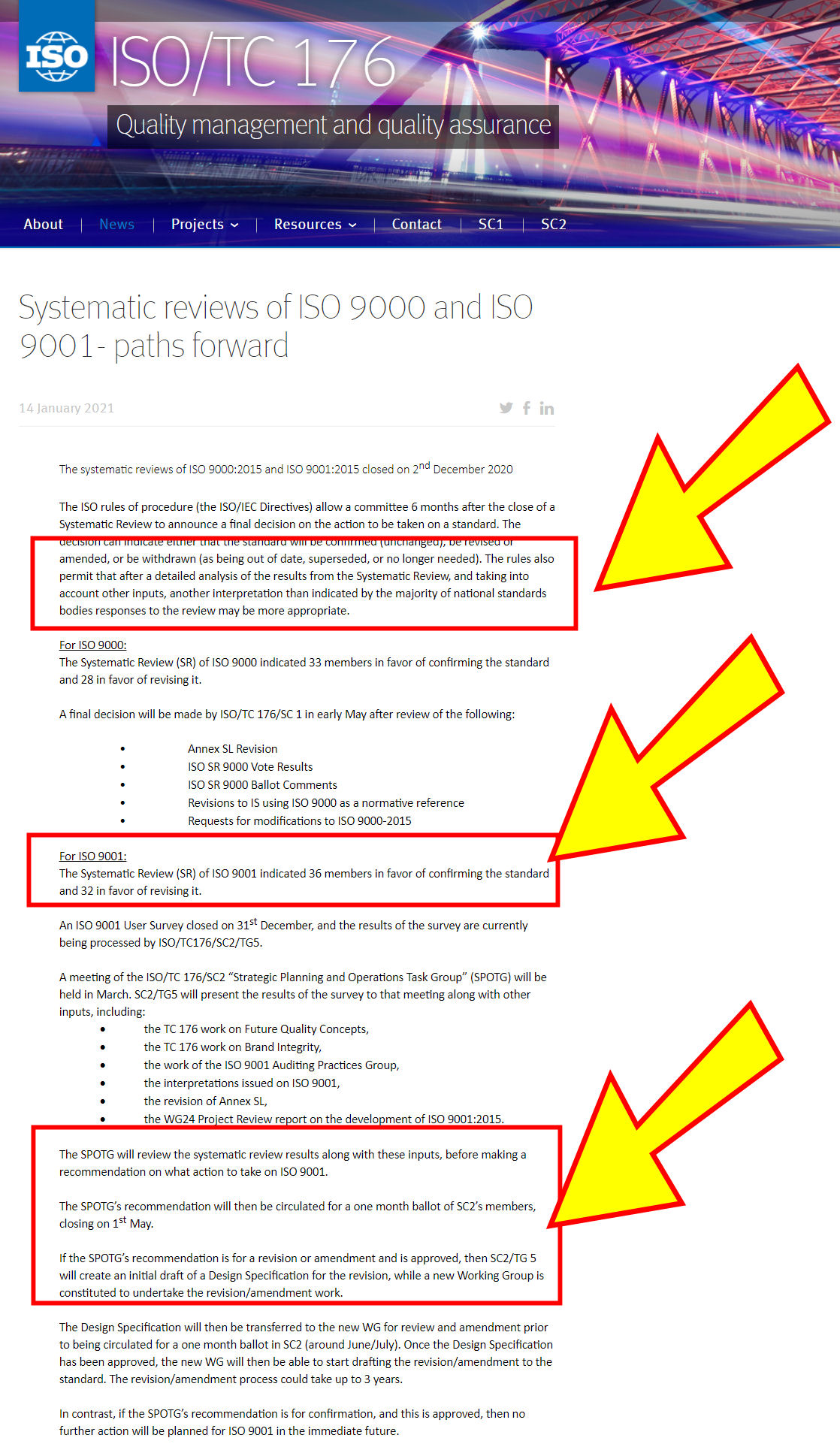 Sure enough, the TC 176 website has been updated, telegraphing the intent to override the official SR vote and revise ISO 9001 anyway.

The official site quotes the above rule to justify why TC 176 is planning to hold another vote on the matter, after a “Strategic Planning and Operations Task Group” decides to throw out the SR vote. That final vote will be limited to TC 176 Subcommittee 2 (SC2) members, led by Paul Simpson, a notorious TMB toady, and ISO sycophant. It is nearly guaranteed, therefore, that SC2 will adhere to whatever TMB tells it to do, and rig the vote so that ISO 9001 is revised, overriding international mandate.

The costs will be enormous. Companies will be forced to buy a new $180 standard, and then implement the changes. With its contacts at the IAF, ISO will force companies to update their systems and undergo special audits to verify compliance with the changes. These special audits may get rolled into routine surveillance audits, but are likely to add audit days to those existing audits, costing the ISO user base a fortune.

In the end, these decisions will have been forced on us by Dick Hortensius, Paul Simpson and a tiny handful of consultant-class cronies within ISO who do whatever Geneva tells them to.

There is one chance at avoiding disaster, but it relies on the most corrupt parties of all.

Accreditation bodies like UKAS and ANAB could mandate that they will allow their CBs to continue issuing ISO 9001:2015 certificates, even if ISO or IAF make a rule saying that any such certificates automatically “sunset.” There is nothing whatsoever prohibiting them from this. The sheer strength of bodies like UKAS and ANAB could come to the rescue, and take back the power they have routinely surrendered to ISO, which insists — falsely — that it has no role in certification activities. If Xiao Jianhua and Elva Nilsen at IAF stomp their feet, the ABs could threaten to leave the IAF entirely, cutting off its revenue and choking it to death.

In reality, however, ANAB won’t do this. ANAB is owned by ANSI, which sells standards, and ANSI stands to make a fortune selling the new version of ISO 9001, and will never overrule ISO. They will fire anyone at ANAB who suggests standing up for customers and end-users.

UKAS is in a similar situation, with its ties to BSI, which also sells standards. The UK government has proven weak and disinterested in reining in UKAS, despite its ability to do so under UK law, so there’s no chance of hope there.

So the conflicts of interest and corruption will win the day, and everyone will have to spend a lot of money all because some guy named Dick Hortensius said so.

So, gird your loins and warm your credit cards. ISO 9001 will be revised no matter what, and ISO will have once again proven that its standards are developed directly against consensus, not based on it. Your view does not matter. All that matters is that ISO can push poorly-written documents onto its webstore and process your Visa card.

UPDATE 16 February 2021: Within less than half an hour from posting this, Paul Simpson chimed in on LinkedIn, defending the process to hold a second vote to un-do the first vote. You can read his comment here. As a result, it’s a foregone conclusion that Simpson and his TC 176/SC2 gang will yield to the TMB, since they should have been rejecting this move, not promoting it. It’s likely that Simpson and others are lobbying nations to vote “yes” this time, so the new vote will have a different result, and they can claim later that the revision was done with world approval after all. 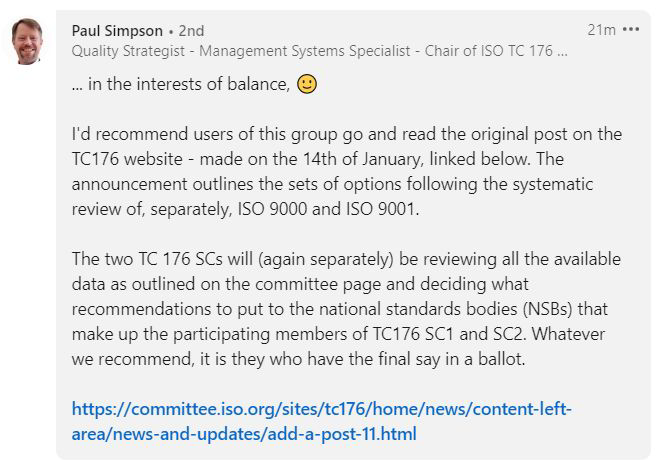 UPDATE 22 February 2021: Now Dick Hortensius has chimed in on LinkedIn with the most disingenuous, bureaucrat-style dodge one could imagine. He creates Annex SL, makes it mandatory for every management system standard, leads the committee responsible for it, then claims no responsibility: