ISO Doesn’t Have Consensus on Whether it Has Consensus 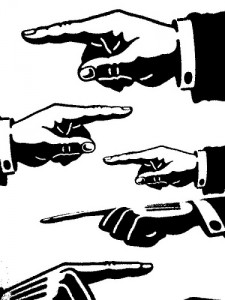 OK, this is another weird one, so strap in.

The other day I ran a piece on how a tiny, seemingly insignificant change in an obscure interpretation of a nearly-unknown requirement may well open the gates to allow all 20,000 ISO standards and guidance document to third party assessment. If you haven’t read that piece, go do so, and come back. I’ll wait.

So, in trying to track down the origin of this change, I once again accidentally opened up the Chamber of Secrets, and the Dementors got loose and scared the bajeezwax out of everyone.  As you saw in that article, a tiny re-interpretation by BSI’s Mick Maghar triggered the question, what is driving ISO to delete the sentence “this International Standard is not intended for the purpose of certification”  from every document that contains it?

In reading the Maghar Interpretation, it appears it was driven by a new interpretation of an old WTO rule, that declares that all ISO deliverables not limit their application, so as not to create a barrier to free trade. The WTO rule was never intended to be interpreted as limiting the free trade of registrars, but rather the users. Mr. Maghar’s interpretation would create the (false) argument that the rule limits BSI’s “free trade” ability to sell certification to standards that have the sentece in it, such as his ISO 31000. In reality, it would not, because it is not a “shall” statement, but merely a statement of intent. There is nothing prohibiting anyone from using such standards for certification, it just says the authors didn’t write it that way.

But I recently spoke to Kevin Knight, Chair of TC 262, and he said he knew of no plans to convert ISO 31000 to a certification standard, as that would require a New Work Item Proposal (NWIP) and then a full re-write and all the obligatory voting. The beauty of the Maghar Interpretation (sounds like  a chess move, or a Star Trek battle formation) is that it forces all ISO Technical Committees to remove the sentence without the need for a single NWIP, without any consensus, all under the guise that failing to do so will get ISO in hot water with the World Trade Organization.

Of course that’s bull-bollocks, because they’ve had those sentences in there for decades, and no one has squeaked.

So to give Mr Maghar the benefit of the doubt, I reached out to the ISO Technical Management Board to get an answer. It turned into the usual he-said/she-said, followed by terrified silence.

I first wrote to Sophie Clivio, the Director of Technical Policy at the ISO Central Secretary, as suggested by Mr. Maghar. Her explanation just made things more confusing.

There has been no change in ISO interpretation of WTO regulations. We have just explained what should or should not be done when drafting a standard based on existing ISO rules and Directives, keeping in mind our neutrality principle regarding conformity assessment  (Demonstration of specified requirements may be undertaken by a manufacturer or supplier (first party), a user or purchaser (second party), or an independent body (third party).

TMB resolution 8/2012 only reminded that statements limiting the purpose or use of standards should not be included in an International Standard as they could be misleading or even incorrect depending on how they are presented  (for example if they are in breach of our neutrality principle). So general explanations on Conformity assessment (on the one hand) and  the TBT agreement/WTO principles (on the other)  are now included in the Foreword of every standard and also available at  http://www.iso.org/iso/foreword

The first problem is that there clearly was a change in interpretation. The ISO standards existed for decades under the same WTO rules. The WTO rules didn’t change, and the WTO didn’t tell ISO to change. Yet ISO is editing every single standard now, so the only thing left to explain is that the interpretation of existing rules changed. So Ms. Clivio is not being honest with her answer, because it defies the facts.

The second problem is that the link she provided indicates exactly the same sentence they are claiming is supposed to be removed, under the section called Implications for Conformity Assessment (emphasis added):

Conformity assessment is the demonstration that specified requirements relating to a product, process, service, person, system or body are fulfilled.

Demonstration of specified requirements may be undertaken by a manufacturer or supplier (first party), a user or purchaser (second party), or an independent body (third party).

Pursuant to 6.7 of the ISO/IEC Directives, Part 2 (sixth edition, 2011), ISO International Standards and other normative ISO deliverables (TS, PAS, IWA) that contain requirements are written in accordance with the “neutrality principle”, such that conformity can be assessed by a first party, second party, or third party.

ISO International Standards and other normative ISO deliverables (TS, PAS, IWA) that do not contain requirements (i.e. do not contain the verbal expression ‘shall’) are not intended to be used for conformity assessment.

Ms. Clivio then tried to hand me off to ANSI, but since ANSI doesn’t establish ISO international policy, I didn’t bother. I was apparently wrong, however, because shortly thereafter I received an email from Steven Cornish of ANSI, who chimed in (emphasis added again):

Speaking on behalf of ANSI and as a member of the ISO/TMB, I believe you have combined the issue of ISO standards in relation to trade and the WTO TBT with the issue of conformity assessment statements in ISO standards.

In 2012, the ISO/TMB did decide that statements were not needed in ISO standards as to whether ISO standards created or could be used to create barriers to trade.  This was because ISO had taken earlier decisions that because the ISO standards development processes conform to WTO TBT principles for international standardization which will guard against trade barriers.

As a separate issue, in 2012 the ISO/TMB also decided that statement that an ISO standard “is not intended for certification purposes” should not appear in ISO standards.  This is because ISO standards cannot dictate how parties will use the standard – that is a decision of parties in the community using the standard.  Therefore, such statements are not appropriate and are seen as a violation of the ISO “neutrality principle” that ISO standards should not favor some forms of conformity assessment over others.  The only thing a committee can do to try to ensure an ISO standard is not used for certification is to write the content of the standard so that it contains no requirements against which conformity can be assessed or certified.

So Mr. Cornish’s explanation also contradicted the “Foreword” ISO page that Ms. Clivio provided.  I pressed on, asking about the contradiction, and advising Mr. Cornish that it wasn’t me “combining the issues,” it was Mr. Maghar. I sent Mr. Cornish a copy of the Maghar Interpretation, and indicated that the ISO Secretary Charles Corrie had concurred with Mr. Maghar. Mr. Cornish wrote back wrote:

I will have to let Charles speak on behalf of himself and Mr. Maghar regarding their interpretation.  As far as I understand, as a member of the TMB who made these decisions, I believe the information I conveyed to be correct.  Perhaps Sophie as the TMB Secretary can confirm my understanding.

I will also have to let Sophie speak to the text in the Foreword of standards as to whether it is inconsistent as ISO staff developed that text.

Keep in mind, this is the International Organization on Standardization, a group founded on the idea of consensus. And here we have four or five people disagreeing, documenting entirely contradictory interpretations and positions, and then pointing to each other as individuals, saying “talk to that guy,” rather than presenting a single, holistic policy.

Sure enough, Sophie Clivio wrote back, unaware that she was contradicting herself now:

Yes I confirm Steven’s understanding which is completely in line with what I wrote before ( although more detailed). When I again (and politely) pointed out this new contradiction and asked (“please”) for a final ruling, they went radio silent. For two weeks.

But maybe I am just missing something obvious. After all, the sentence in dispute says “certification” and the sentence provided by Ms. Clivio says “conformity assessment.” Is that the problem? Are they making a distinction? If so, why can’t they just say that? And why can’t we move on, and get to the real question: where did this change come from? What prompted it, really?

Apparently I touched a sensitive issue without knowing it, because at the same time, TC 262 Secretary Tim Fisher promised to have me prosecuted for criminal theft of ISO intellectual property, and sent ISO’s lawyers on me (again),  claiming trademark privileges over mere conversations regarding the draft ISO 31000 standard, and this business about whether or not that sentence will appear.  But meanwhile, why can’t we get a single straight answer out of them, and why does it provoke such a “nuclear” response when one merely asks questions?

So there’s definitely something up. Either the BSI conspiracy is true, or it’s just gross incompetence. Either way, it’s abundantly clear that the TMB is now writing standards, not the TC’s, and doing so through executive mandates. Any idea that standards are developed by international consensus is officially dead.

Which, ironically, now puts them in potential violation of the WTO. Sigh.