EA Executive Secretary Andreas Steinhorst has notified Oxebridge that he will not pursue the escalation of the complaint against Akkreditierung Austria (“AA”), claiming that he does not have “evidence” that AA was given “the opportunity to respond” to the original complaint, despite AA being notified of the complaint for months:

I am afraid we cannot help you at this stage. 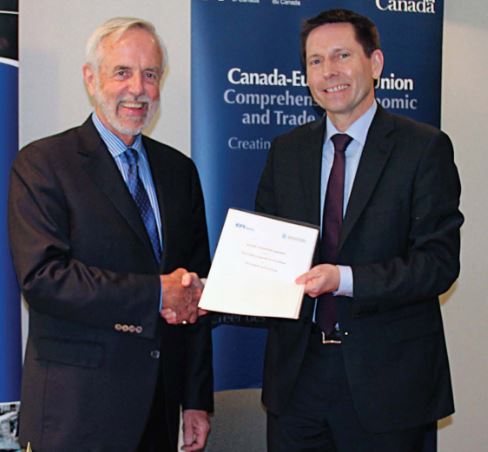 EA was submitted a 13-page complaint against Quality Austria on October 3, 2019. AA refused to acknowledge the complaint at that time. Oxebridge then formally escalated the complaint to AA on December 18th, 2019, but AA has not acknowledged receipt of the complaint. Subsequent emails to AA director Norman Brunner then went unanswered as well.

Complaints processing rules require that AA simply acknowledge receipt of the complaint; it does not expect AA to have the matter investigated or closed by now. Without acknowledging receipt, however, AA can stonewall processing the complaint, alleging it was never received.

Steinhorst’s response essentially asks Oxebridge to “prove a negative,” by suggesting it provide evidence that AA did not respond to the complaint. This allows AA further time to delay processing the complaint.

EA’s published 2019 presentation document indicates the organization’s mission includes “Ensuring transparencly of the operations performed and results provided by its members.” The same document claims EA’s Values include, “We are responsible – by involving and listening to regulators, industry and other stakeholders” and “by being proactive.”

EA has been warned that a potential crime may have been committed, and that citing “procedures” is not a valid reason not to investigate. Oxebridge is currently researching whether the payment of alleged “five star vacations” for the Quality Austria and Akkreditierung Austria representatives constituted criminal bribery under Austrian and Qatar laws. Under the Austrian law Fibel zum Korruptionsstrafrechts- änderungsgesetz 2012:

An official or arbitrator who claims an advantage for himself or a third party for the dutiful conduct or omission of an official business, or who accepts or promises an undue advantage shall be punishable by a custodial sentence of up to two years.

Akkreditierung Austria falls under the Austrian Federal Ministry for Digital and Economic Affairs.

Oxebridge is also investigating if any criminal acts were conducted which fall under Qatari anti-corruption laws.

Ironically, Quality Austria sells ISO 37001 certification for “Anti-Bribery Management Systems.” Those certificates are expected to be accredited by Akkreditierung Austria later in 2020.

Steinhorst and Brunner have attended multiple events together, with Steinhorst representing EA and Brunner acting as an IAF representative, as IAF MLAC chair. Oxebridge argues the close relationship makes it difficult, if not impossible, for EA to prosecute a complaint against Brunner and his Akkreditierung Austria organization.

This is not the first time that EA has failed to act on criminal acts by CBs and ABs under its control. In 2013 the Hungarian division of Hoerbiger used a forged ISO 9001 certificate bearing the LRQA and UKAS logos in order to gain bidding rights on a lucrative oil contract, a crime under Hungarian law. When reported, LRQA and UKAS responded by granting Hoerbiger a valid ISO 9001 certificate, rather than report the crime or pursue trademark infringement lawsuit actions. This allowed Hoerbiger to pursue the oil contract with a valid ISO 9001 after the crime was committed, while ensuring LRQA won a 3-year auditing contract. When complaints were filed, LRQA and UKAS both ruled that they would take no action, although both admitted the original certificate was a “forgery.” This was eventually escalated to EA, who ruled on the side of LRQA and UKAS, allowing the crime to remain unreported and unpunished. The decision runs counter to the published Mission and Values of EA.

The US accreditation body ANSI also refused to investigate a potential crime, citing procedures as its excuse. In 2013, the ANSI standards committee “US TAG to TC 176” was found soliciting donations of tens of thousands of dollars to host an ISO official event. ISO awarded the venue to Portugal, and so the US event never occurred, but officials at ANSI and ASQ — which managed the fund’s bank account — never revealed what happened to the funds. ANSI refused to investigate, even though allegations of US tax fraud were made, and instead cited “procedures ” procedures that would have required Oxebridge to pay a $1200 complaint processing fee. Oxebridge argued that ANSI could not ignore a crime on the basis of waiting for fees, nor could it seek to profit from the reporting of crimes. ANSI never took action, and so Oxebridge reported the fundraising to the US Internal Revenue Service; ASQ was later audited by the IRS.

Accreditation bodies are notorious for defending their inaction and refusing to launch investigations by citing “procedures.” Such procedures generally have no basis in law, as most legal systems do not allow an organization to intentionally refuse to alert law enforcement of a crime on the basis of internal procedures. The Vatican is one of the only institutions that holds this authority.