The Chair of the International Accreditation Forum (IAF), Emanuele Riva, is refusing to comply with an official directive issued by the IAF itself related to international sanctions against Russia for its invasion of Ukraine.

In May, the IAF released a directive ordering its member Accreditation Bodies (ABs) to ensure that international sanctions against Russia and specific Russian firms were honored. Refusal to do so, the directive said, would result in the AB being expelled from the IAF:

Riva is simultaneously the Vice General Director and Director of the Certification and Inspection Department for the Italian accreditation body ACCREDIA, however. That body has actively provided services in Russia, largely — but not limited to — its accreditation of the St. Petersburg-based certification body TEST.

TEST has issued multiple ISO 9001 and other certificates, bearing the ACCREDIA accreditation mark, to firms under international sanctions, including Gazprom.

Despite the IAF directive, as of today it appears that ACCREDIA has not taken any action to honor the IAF’s mandate. The ACCREDIA website continues to list TEST as fully accredited: 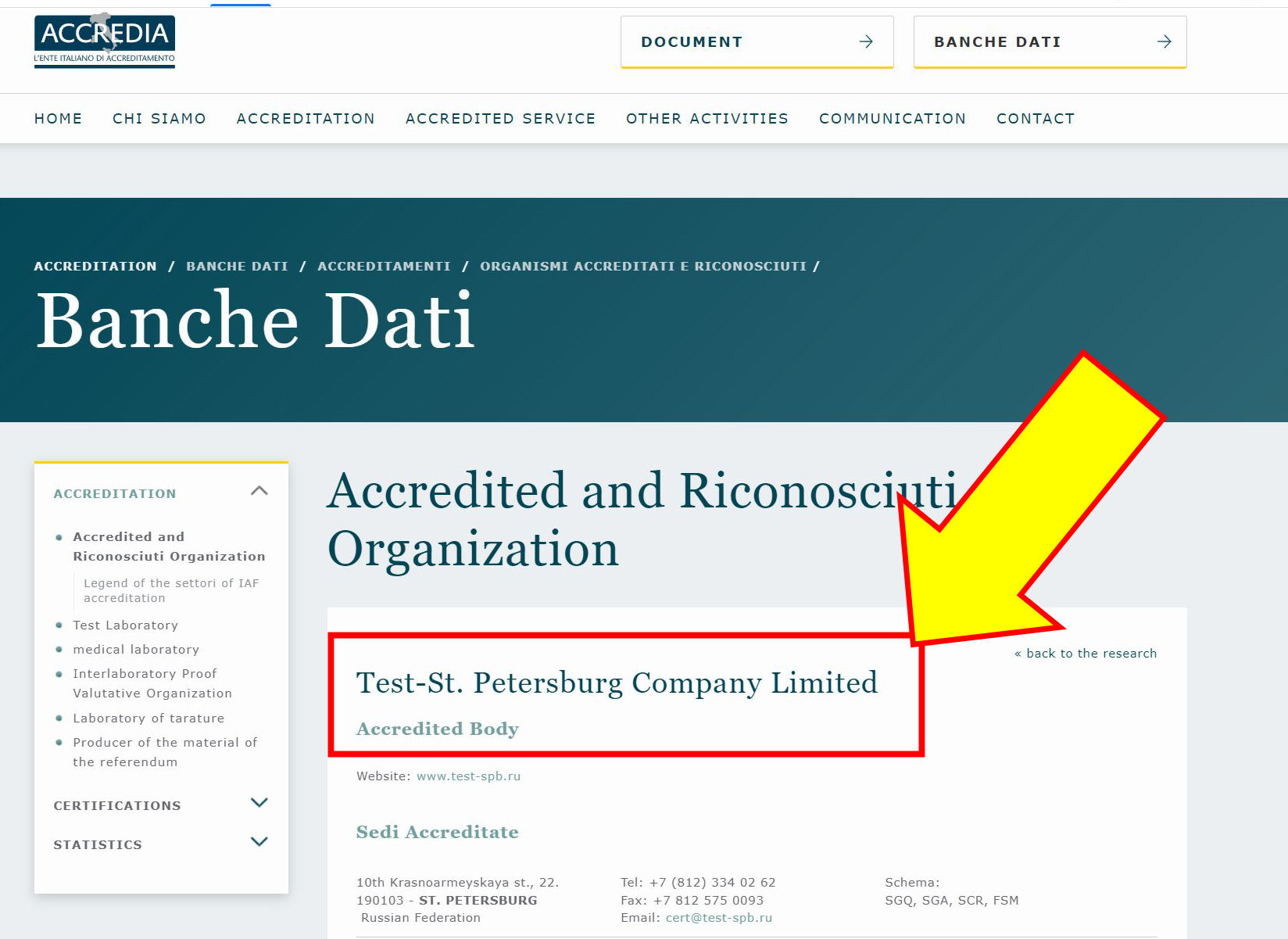 At the same time, TEST continues to list Gazprom and other sanctioned companies as certified, per its own website. 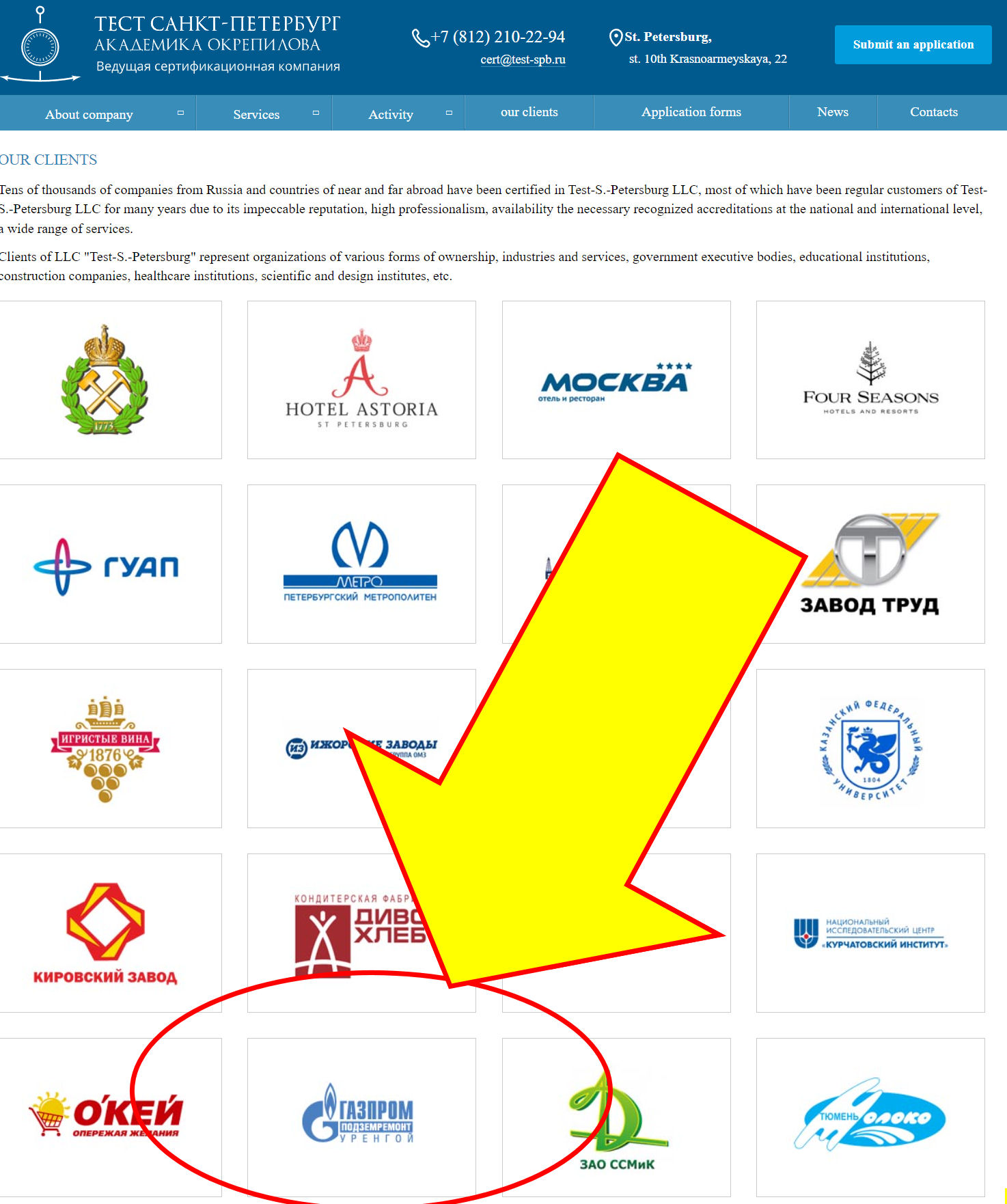 The revelation means that the IAF’s chair has elected not to honor the directives of his own IAF, sending a message to members that the IAF statement was never intended to be enforced.

This comes as the IAF celebrates “World Accreditation Day,” a day invented by the IAF and its partner organization, ILAC, to raise awareness of international accreditation.

ILAC has not issued any statement at all on the Russian invasion, and continues to honor membership of Russian firms and allow its logo to be used on accreditations in that country. ILAC Chair Etty Feller has refused to comment on ILAC’s refusal to honor international law. IAF and ILAC are planning a merger next year.

Riva’s refusal to ensure ACCREDIA upholds the sanctions puts it in violation of Italian law, as well. In April, one month before the IAF ruling, Italy officially announced it was honoring EU sanctions against Russia and key Russian firms.

The IAF initially refused to honor the sanctions, and Riva issued statements claiming that the IAF’s internal procedures somehow superseded international law. That decision was not supported by any legal rulings, and the IAF does not have attorneys on staff to help it derive such positions. Eventually, a majority of IAF member bodies surrendered to international pressure and negative press, and helped craft the May statement, overruling Riva’s previous position. Riva later tried to falsely take credit for the revised statement.

Riva took over the IAF Chair position from China’s Xiao Jianhua, and has immediately embroiled himself in numerous scandals.

Riva issued a statement legitimizing the IAF’s main competitors, the growing network of unaccredited “certificate mills.” Riva claimed that an IAF member accreditation body was not in violation of any rules when it sold consulting “template kits” to its own clients. By doing so, Riva justified the actions of certificate mills, which typically certify their own consulting clients, and opened the door to allow more conflicts of interest by IAF member bodies.

Riva also defended the AS9100 certification given to a company found to have intentionally released defective aircraft components to Leonardo DRS, which were later installed on Boeing Dreamliner planes. During that latter investigation, Riva falsely claimed the company in question was not the one certified to AS9100. He later admitted he was wrong, but did not retract his argument, continuing to argue the company should retain its certification.

Riva is facing new pressure from members as the IAF mulls making participation in its CertSearch database mandatory. ABs and CBs have resisted this for decades, and the IAF has begun publishing statements from private companies endorsing the move, in order to put pressure on the members. Oxebridge then learned that UKAS, the UK’s official accreditation body, is considering leaving the IAF entirely, a move that would likely result in mass defection.

On LinkedIn, the ISO certification expert Alex Ezrakhovich questioned whether it was time for Riva to resign. Ezrakhovich has been active in ISO standards for decades, and was the chief architect of many of the IAF’s own Mandatory Documents, which are requirements for member bodies.

The Russian certification body Russian Register has ignored the IAF’s mandate, and continues to issue certificates with the IAF logo. The IAF lacks any legal recourse, since it has no budget for legal counsel, and has no legal representation in Russia.

The IAF is registered in Delaware, however, and Oxebridge has already filed a complaint with the US government alleging IAF is in violation of OFAC sanctions. The IAF’s revenue includes a portion of the costs paid by bodies under sanctions. Oxebridge is making the argument this amounts to participation in money laundering by firms like Gazprom and Rostec, which are under US sanctions as well.

Riva did not respond to requests for comment on this article prior to publication.