An Italian supplier to aircraft manufacturer Leonardo is under criminal investigation for allegedly having sold counterfeit aluminum and titanium, intended for use in Boeing’s 787 Dreamliner commercial airplanes. According to a report by Bloomberg, “flawed parts included titanium spacers, brackets and clips used in sections of the carbon-composite airframe.”

A check on the official IAQG OASIS database found that the supplier, Manufacturing Process Specification SRL (MPS) of Brindisi Italy, held multiple AS9100 certifications during the three-year period in which the alleged counterfeit products were shipped.

OASIS records show that MPS had three different AS9100 certification bodies between the period of 2018 to 2021, an unusual circumstance.  The most recent certificate was issued in July of 2021 by the certification body CISQ and accredited under the IQNet and ACCREDIA logos. 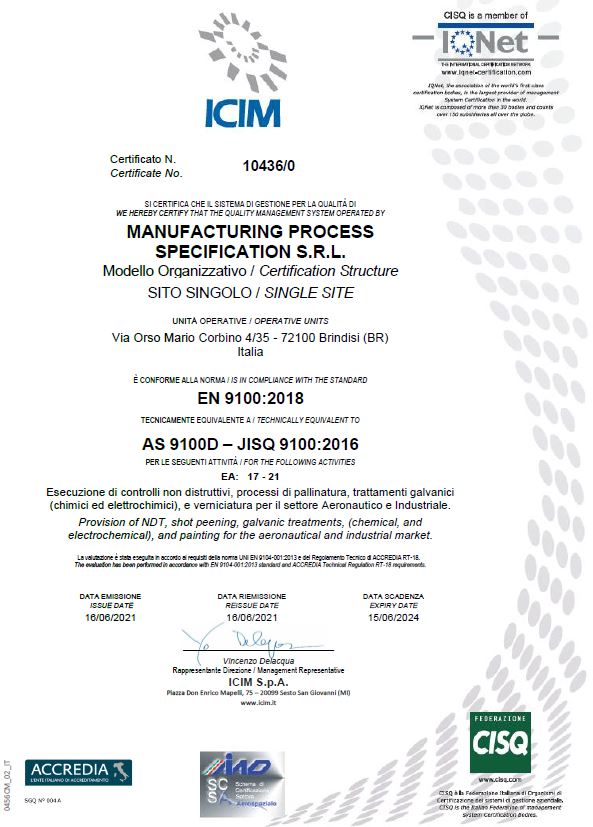 AS9100 certificate issued to MPS

The criminal investigation alleges the data falsification and shipment of counterfeit materials began in 2018 at least, thus raising questions about the audits performed by all three bodies.

OASIS now lists the certification for MPS as “suspended,” meaning that it is only temporarily on hold. Unlike a “withdrawal,” a suspended certificate ca

n still be restored. The suspension was issued on December 20, 2021, after the story broke to the international press.

The timing suggests that none of the three certification bodies involved ever discovered the data falsification and counterfeiting, despite a requirement to specifically audit the clause of AS9100 rev. D related to “prevention of counterfeit products“, as well as the clauses related to product inspection and testing. The suspension was thus likely due to media coverage, not actual findings by any of the AS9100 auditing bodies.

Boeing issued an industry warning about MPS as early as March 2021, indicating at that time that MPS’s AS9100 and Nadcap certifications had been suspended; this does not match the data shown in OASIS, however.

Companies accredited under the IAF scheme have repeatedly found to be delivering falsified or defective products, sometimes resulting in injury or death to the public. Despite this, the IAF — as well as bodies such as ACCREDIA, ANAB, and IQNet — refuse to take action. They remain largely unknown to investigators, so are rarely brought in as subjects of investigations, despite their accreditations being a primary factor in how companies like MPS gain contracts with suppliers such as Boeing and Leonardo.

The MPS website and social media accounts have been taken down. Representatives of IAF, IQNet, and ACCREDIA were contacted for this story, but did not reply prior to publication.

UPDATE 18 January 2022: The Chair of the IAF, Emanuele Riva, has defended his organization in the wake of the MPS scandal, and blamed the situation on a single, rogue AS9100 auditor.  See that full report here.

UPDATE 25 January 2022: the AS9100 certification for MPS was permanently withdrawn as of 19 January, according to an OASIS update. The reason given is “non-payment of invoices,” likely because MPS has closed operations and filed for bankruptcy.