It appears the Greek product certification body Cosmocert tried to rewrite a little history in order to dig out from under our reporting which showed they had used an industry-wide “accreditation template kit” in order to get ISO 17065 accredited.

Back in October we reported on a massive scandal involving dozens of certification bodies who had utilized a template kit sold by Global Manager Group. That kit allowed CBs to obtain accreditation by simply paying a few hundred dollars, pasting their name into the pre-written documents, and then undergo accreditation by official IAF member accreditation bodies. The problem is that Global Manager Group is operated by a Board Member of one of those very same IAF member bodies, namely the International Accreditation Service. The Board Member then said it’s not a conflict of interest because his sales were low. Ahem.

Cosmocert, we reported, had used the kit and was thus included in our list from that October report. We uncovered this scandal is by methodically reviewing public policies and documents of the various bodies against each other, and against sample documents and other examples of the GMG kit. This literally took months. One of the ways to check this was by comparing policies that CBs are expected to make public, such as their Quality Policy and procedures on complaints handling.

As of October 2020, Cosmocert shared the same exact Quality Policy as many of the other CBs listed in our report. This is how it appeared at that time: 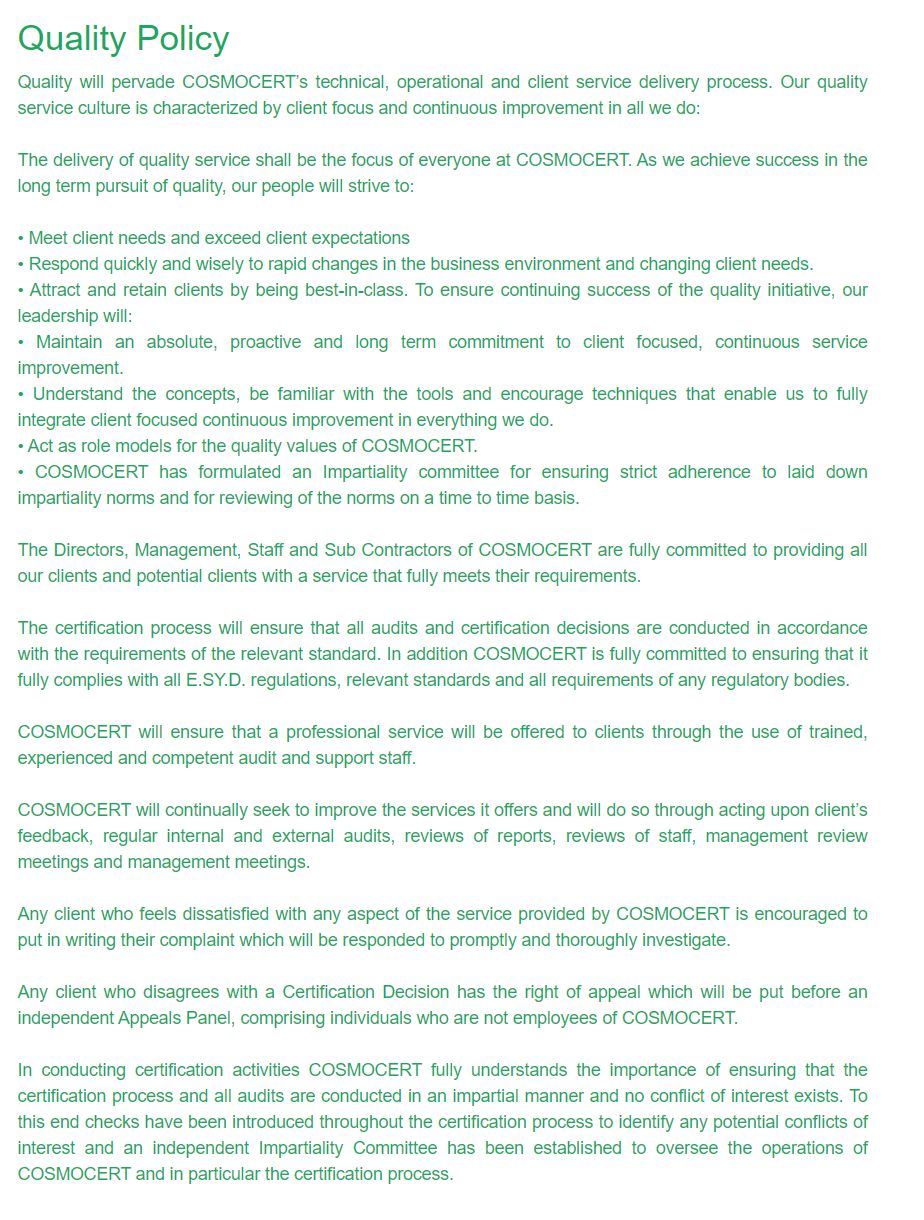 Now compare this to the Quality Policy of another CB, IQS International: 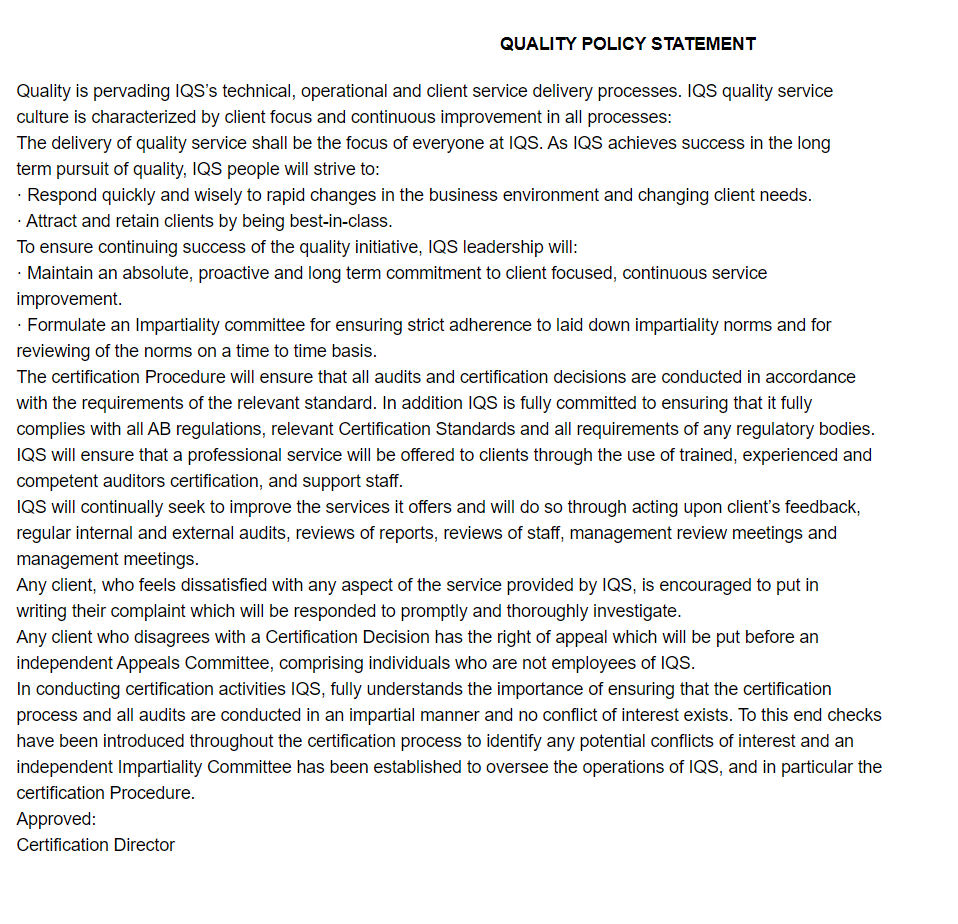 A few days ago, on January 12, however, a representative of Cosmocert wrote demanding we remove the reference to them in the article, claiming, “we would like to draw to your attention and assure you that our company has never used this ‘template kit’ that you mentioning on your webpage.” Sure enough, a check of the Cosmocert website now shows a different Quality Policy altogether: 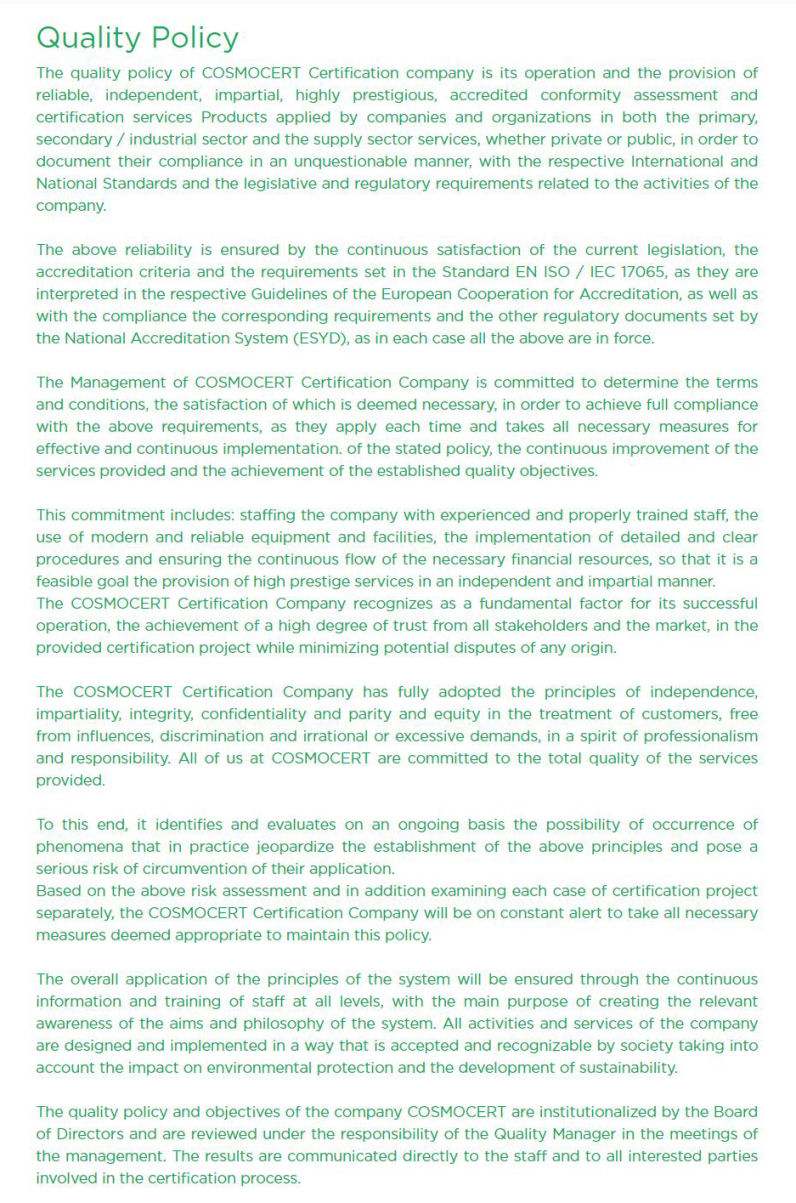 Not so fast. Google searches still show a cached version of the original Quality Policy was available at least in December of 2020 meaning that at some point either in late December 2020 or early January 2021, Cosmocert altered their Quality Policy so that it no longer utilized the kit language.

Then, they apparently thought no one would notice and are now falsely claiming they never used the kit policy at all. Which is, of course, a lie.

True, and I fixed the report. What Cosmocert didn’t mention, however, is that they are accredited by the Greek body EYSD for ISO 17065 as a product certification body.

To recap: an accredited CB was caught using a template kit sold by an accreditation body, then got accredited, then intentionally altered documents after the scandal was reported, and then lied to cover up the facts.

Now EYSD is involved, and I have asked them to consider the fact that Cosmocert is attempting to defraud the public with this latest move.

Expectations are low for EYSD to do anything, given they helped “close” (I’m being polite) a prior complaint levied against one of their other CBs.

The problem for ISO users? None of this is even illegal. The IAF scheme is so corrupt, and almost entirely without governing laws, that CBs can use template kits developed by an accreditation body and get accredited by another AB all day long. They can even lie about it and commit all sorts of fraud without ever violating an IAF rule or ISO/CASCO standard, because the standards are silent on such things. So far, the IAF has refused to take up the issue at all, even in the case where CBs used the kit sold by the IAS Board Member and then used IAS itself for accreditation. Whereas ISO 9001 demands that companies comply with all applicable statutory and regulatory requirements, accreditation standards like ISO 17065 are silent on that subject —  a happy circumstance for corrupt CBs and ABs!