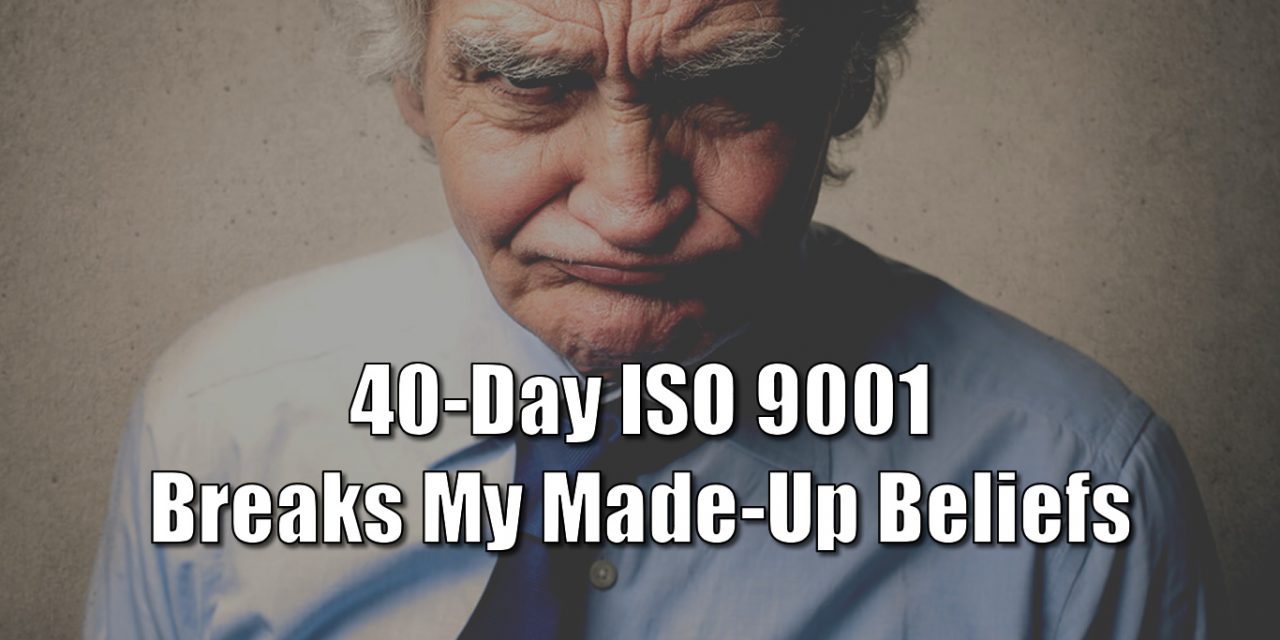 You’d think they’d update their script, but ISO consultants are apparently not the smartest folks. Over 20 years since Oxebridge launched “Rapid 40-Day ISO 9001 Implementation,” competing consultants continue to trot out tired, old tropes to defend their practices of milking clients through endless, year(s)-long contracts, or to dupe people into subscription-based “cloud QMS” solutions that lock them into decades of contracted services.

I had already published a debunking article called “Yeah, We Can Do That” over ten years ago, but apparently, that’s not enough. So let’s run down the long-since disproved claims made by the “40-Day ISO is Impossible” crowd:

CLAIM: ISO 9001 requires a minimum of XX months of records.

FALSE. First, each consultant will just make up the actual number (some say 6 months, others 12), showing it’s just invented from thin air. But a review of ISO 17021-1, the standard which governs certification audits by accredited registrars, as well as related standards or IAF rules (including those for AS9100) show not a single rule which dictates minimum record requirements prior to certification. Not one. This “rule” is entirely made-up by consultants who seek to extend their contracts and, thus, bill clients more.

CLAIM: A QMS cannot be “mature” enough to pass an audit at only two months.

FALSE. Again, this also conflates implementation with certification. Oxebridge sells ISO 9001 implementation, not certification. A company can wait as long as it wants from the time Oxebridge is finished to when it undergoes an audit. If they want to trigger an audit at the end of two months, they can, and the system will be compliant enough to pass; some clients wait many months before pursuing their audit, to allow them to mature further.

Furthermore, “maturity” is wholly subjective and not a requirement. The truth is that ISO 9001 is a minimum baseline standard, and sets the stage for maturation (called “continual improvement”) over time. It is not expected that a company will have a QMS of the same maturity during their first audit as they will their 10th audit, many years later. There is no requirement to prove “maturity” as part of an ISO 9001 certification audit.

CLAIM: You need “management commitment” in order to achieve ISO 9001, and that’s not possible in two months.

FALSE. Again, “management commitment” is a subjective concept, and is not some binary construct that you either have or not. Instead, one can implement ISO 9001 so that the requirements — as written in ISO 9001 clause 5.0 — are met. There is no need for cultish brainwashing of executives.

The argument is traditionally used as a pre-emptive escape clause that a consultant can use later when things go sour. “You didn’t pass your audit because you never gave me your full commitment!” It’s a sure sign that a consultant has had prior failures, and working to protect themselves. Oxebridge can implement ISO 9001 in a company where the management is outright hostile to the concept. As a professional, it’s my job to turn that view around, and sometimes that means showing management the benefits after I have finished the job.

Imagine an auto mechanic prefacing every repair job with the statement, “Your attitude doesn’t meet my made-up expectations, so I may not be able to fix those windshield wipers.”

FALSE. I’m not sure where this one comes from, but it reveals that ISO consultants can’t do basic math. If work weeks are five-days each, then 40 days is two months (eight weeks.) Imagine what you could do if you had someone working on ISO 9001 implementation for two months straight, and nothing else.

CLAIM: You can’t do 40-day ISO  in huge companies.

TRUE. That’s why we don’t say we can. But for companies up to a few hundred employees, yes, we can. If you’ve got 500 employees, it will take longer due to increases in training time and internal audits.

CLAIM: Oxebridge is a hypocrite: it fights “certificate mills” but then offers quickie ISO implementation.

FALSE. This is a false dichotomy and conflates the issuance of fake ISO 9001 certificates by unaccredited or self-accredited bodies — who may not even conduct an audit — with ISO 9001 implementation speed. Hundreds of companies have undergone Oxebridge Rapid 40-Day ISO 9001 Implementation using fully-accredited registrars like BSI, Intertek, Bureau Veritas, SGS and TUV, without issue.

FALSE. Implementation of AS9100 requires no additional time above that required for ISO 9001.

DUNNO. Oxebridge doesn’t do consulting for the automotive industry.

In the meantime, click here to get an accurate proposal for Rapid ISO 9001 and see what we can do specifically for your company.