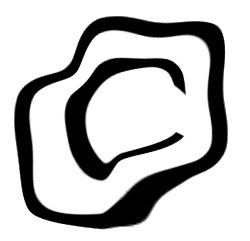 It seems to be a decades-long problem with AS9100 registrar DNV-GL: they continually republish official ISO standards or IAQG materials under their own name, and then slather on a copyright notice usurping the actual copyright owner’s rights. In some cases, they just outright steal shit.

Previously DNV’s former aerospace manager, Sidney Vianna, was found to have republished six entire Oxebridge articles over at the Elsmar Cove forum, and then went on a gasket-blowing rant about how I have mental problems for posting them in the first place. That was clear copyright violation, and when I reported it to DNV’s in-house counsel, Vianna found himself demoted to an engineer position, and was no longer listed on any IAQG committees, a purgatory in which he still languishes. Because DNV did the right thing and took action, I didn’t have to sue them, but because Vianna did this while on the company dime, the entire DNV organization was put at risk.

Then we kept finding old Vianna presentations given to the ASQ sections out in Los Angeles, in which he kept taking other people’s materials, and republishing them under the DNV logo, with a copyright notice and everything. I had thought this was a Vianna problem — internet trolls tend to have pretty flexible views on laws and anything that might hinder their ability to promote themselves — but now it seems that’s not the case. DNV-GL itself has a copyright interpretation problem.

When looking to buy the latest AS9101 Rev F standard, I was surprised to see a DNV-GL presentation pop up early in the Google search results. The presentation was dated February 9, 2017, and is credited to Robert L. Keys, DNV’s “Emeritus Aerospace Program Manager.” Keys was a former weld inspector who landed a job with DNV back in 1998 and stayed there for seventeen years, apparently moving up to step in when Sidney got thrown under the bus. It’s not clear who gave him the title “Emeritus Aerospace Program Manager,” but I assume it sounded better than “Emeritus Weld Inspector.”

The Keys presentation follows the same MO as the former Vianna ones: someone took an entire IAQG presentation, dumped it into a stock DNV-GL PowerPoint template, and shoved a statement on the bottom claiming the thing is “DNV GL © 2017.” Which not only isn’t the correct way to cite a copyright, but also suffers from the fact that it’s wholly untrue, since you can’t take someone else’s intellectual property and claim copyright on it. Even if IAQG gave DNV permission, they still can’t claim copyright, and instead they’d have to indicate “used with permission” and then note IAQG’s copyright.

The Keys presentation adds a few original slides, but the entire body is comprised of the entirety of the original IAQG prez, which indicates it was created in December 2015 by the “IAQG 9101 Team.” The metadata on that file doesn’t list an actual person as the author. 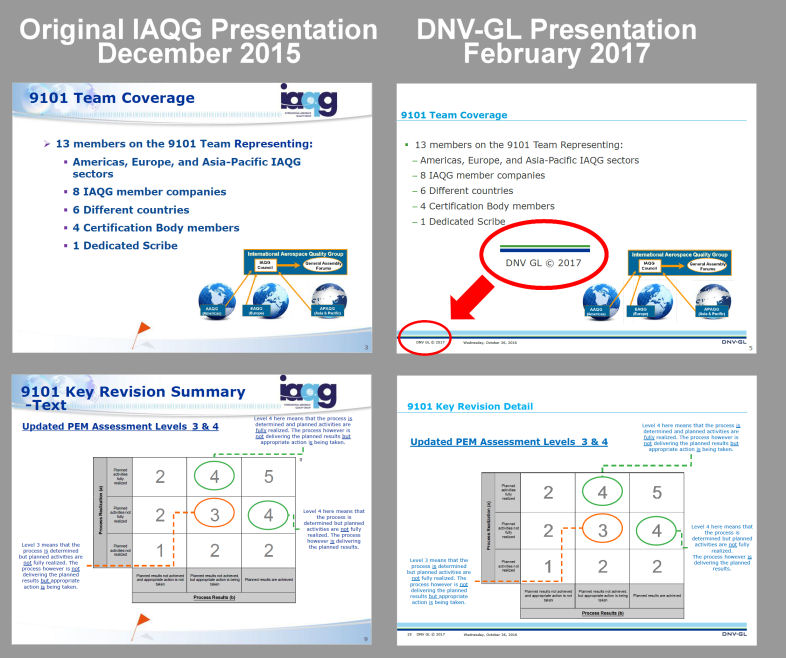 IAQG does list Keys on the 9101 Team, however, so Keys probably thought he could just take the IAQG’s work and repackage it to serve his actual paying master, DNV. As I said, maybe he got permission. Either way, this creates some problems, though, since the IAGQ’s subsequent lack of disciplinary action against DNV for copyright violation essentially tells the rest of the certification body world that DNV is granted special rights, and the rest of you registrars can go suck eggs. What’s more troubling, when one follows this to its logical conclusion, is that any problems with DNV misbehaving during AS9100 audits would have to be reported through OASIS back to … you guessed it… IAQG. If IAQG grants DNV special rights, then what is the likelihood they would treat DNV impartially and process the complaint fairly?

Meanwhile, thanks to DNV’s unique participation on IAQG, it doesn’t just get to fluff up its marketing by boasting of having a staffer on the committee, it gets to steal the actual, official IAQG materials, re-brand them as its own, and then use them during DNV-only marketing events. No other registrar has these rights.

On the other hand, it could just be lax enforcement, sending the message that anyone can take IAQG documents and rebrand them to sell stuff. But you can imagine if any of these documents showed up with the Oxebridge logo how purple-necked the old white guys at IAQG would get, right before they called their lawyers and cardiologists.

This yet again shows the infestation of conflicts of interest in these various schemes. Not only does it show that cronies write the AS9100 standard and surrounding certification rules, they do so with the open intent of benefiting themselves, even at the expense of their fellow colleagues and participation supply chain organizations. Whereas BSI is the registrar that overwhelmingly dominates the ISO 9001 scheme, under AS9100 it’s DNV-GL.