A company responsible for falsifying test data on faulty insulation that contributed to the Grenfell fire in the UK still retains ISO 9001 and ISO 14001 certifications issued by SGS, Oxebridge has learned.

Celotex, a Suffolk UK manufacturer of fire-resistant “cladding” used in building construction, has been the subject of a criminal inquiry in that country. The material was deemed a contributing factor to the deadly Grenfell Tower fire. Celotex is a division of the Saint Gobain Construction Products company.

According to testimony by Celotex employees, the company failed an initial test of its cladding products, and then began working on ways to rig the test so that subsequent tests would pass. First, the company reconfigured the test setup to insert a “board made from magnesium oxide behind the cladding to resist the fire.” Such a board would not be present in any standard usage by construction firms who eventually installed the product. Celotex then increased the thickness of the test panels from 8 mm to 12 mm to further spoke the results in their favor.

The retests with the compromised test rig worked, and the product passed. The employees then testified that the company moved to a “coverup” phase, in order to hide the test manipulations. This included removing all mention of the first failed test, as well deleting any mention of the use of magnesium oxide back panels.

The eventual fire led to the deaths of 72 people and is considered the worst fire in modern UK history.

Despite the public testimony and reporting by mainstream press within the UK and around the world, SGS has not seen fit to strip Celotex of its ISO 9001 and ISO 14001 certifications.

The current ISO 9001 certificate indicates it was issued by SGS in April of 2018, over a year after the fatal Grenfell fire. The certificate indicates the company would have then undergone another audit in June of 2020. In October 2019, the “first phase” of the official Grenfell public inquiry began, with the “second phase” being conducted in November 2020.  Therefore, SGS had multiple opportunities to withdraw the Celotex certificate, but did not. 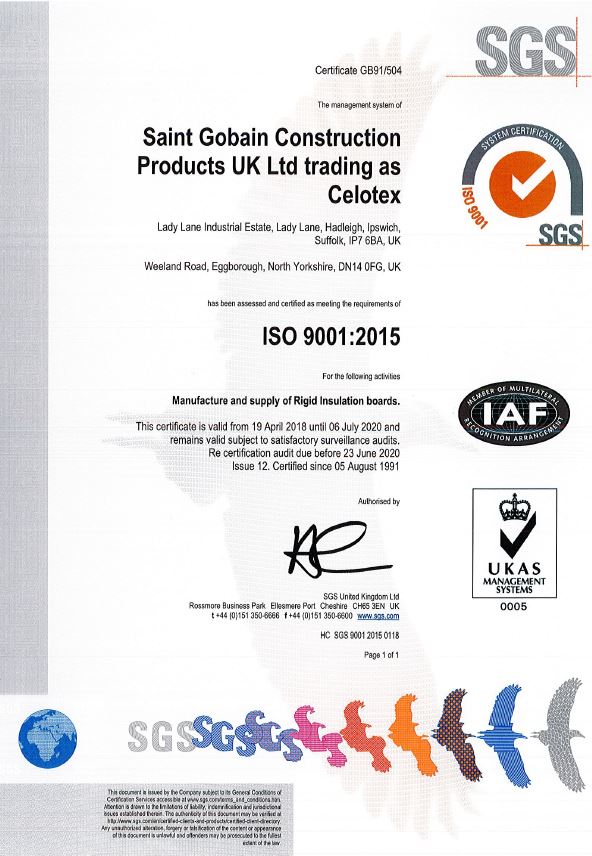 Worse, the certificate indicates that Celotex was certified since 1991, meaning it had been engaged in the deception during its certification period, despite undergoing regular ISO 9001 audits. Auditors would have had access to the test records which may have revealed the fraud.

While the certificate obtained by Oxebridge was expired as of June 2020, official SGS records available from the SGS website indicate the company remains certified as of this writing in January 2021, presumably under a new three-year contract: 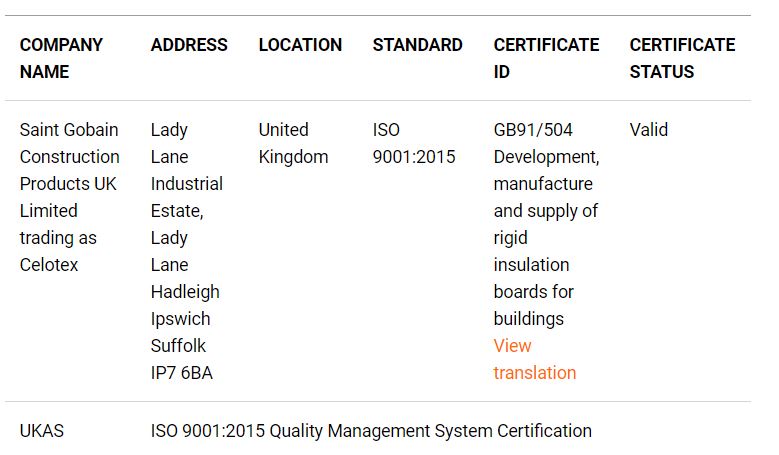 The signature on the SGS certificate is not clearly legible and no name is given of the SGS executive who signed it. The certificate is accredited by UKAS and features the UKAS and IAF logos.

Another company involved in the disaster, Arconic of New Kensington PA, has also maintained its ISO 9001 certification, issued by Bureau Veritas. According to the Guardian:

Arconic, which made the cladding sheets that were the main cause of the fire’s spread, obtained a certificate for its plastic-filled panels on “a false premise” by supplying test reports for a more fire-retardant version of the product, lawyers for the bereaved and survivors told the inquiry.

A third company blamed for the disaster, Kingspan, also holds various ISO 9001 certificates issued by SGS, Bureau Veritas and BRE Global, but Oxebridge has not been able to confirm these applied to the sites responsible for the defective testing. Kingspan has been accused of conducting “dodgy” testing on the cladding panels.

All of the companies’ certificates were accredited by UKAS and featured the IAF logo.

Both UKAS and IAF have resisted years of complaints and calls for them to aggressively enforce accreditation rules requiring ISO 9001 certificates are only issued to companies who have properly functioning quality systems. Instead, Oxebridge has amassed over a decade’s evidence showing certified companies routinely engage in unethical, illegal and at times criminal practices, and yet maintain those certifications even after public disclosure. In many cases, companies were shut down and their managers convicted of crimes, even as UKAS and other bodies continued to attest to the performance of their quality systems.

UKAS is largely protected by its status as the UK’s sole accreditation body, enshrined under law. That law also requires UKAS to obey its obligations under ISO 17011, but UK ministers and government officials consistently ignore the company’s transgressions. Oxebridge asserts this is either due to government incompetence or “coziness” between UKAS executives and officials within key ministries.

The International Accreditation Forum (IAF) at the same time has decreased its oversight of bodies such as UKAS, as Chinese officials from the China National Accreditation Service (CNAS) have taken over that organization’s senior leadership. Under Chinese official Xiao Jianhua, reports of IAF abdication of duty have increased, even as the group postures on the world stage by publishing largely meaningless “mandatory documents” that it later does not enforce.

Both UKAS and IAF could step in at any time to withdraw the certificates of the Grenfell-implicated companies, but choose not to.

In the past, an SGS executive refused to process a formal complaint put to the company, calling it “an inquisition.”