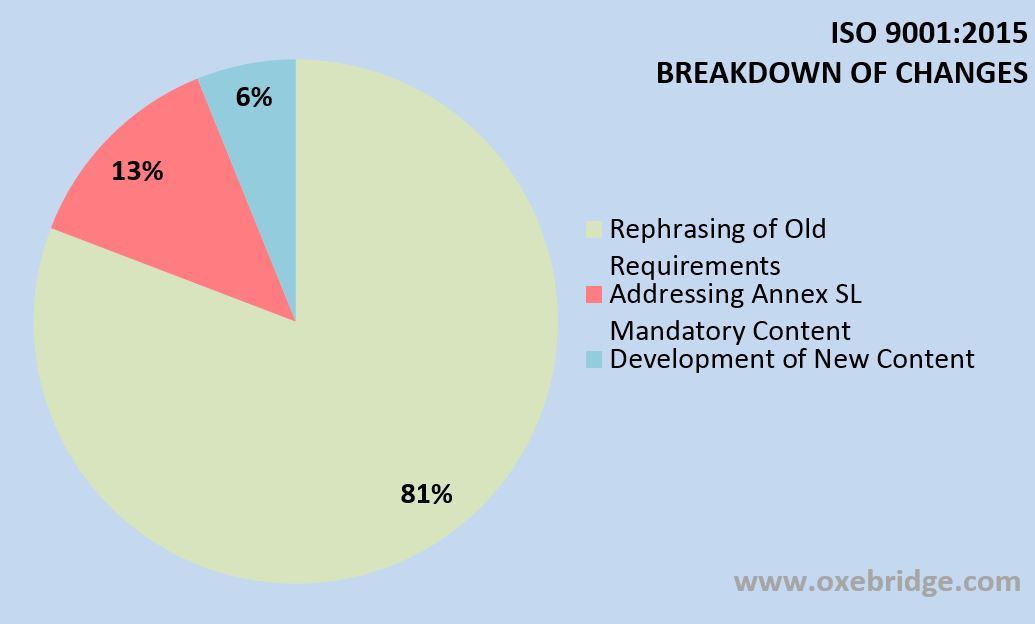 We did this experiment with the DIS version of ISO 9001:2015 a while back, and I felt it was worth it to run it again on the final released version. Using only the raw text from clauses 4 through 10 of ISO 9001:2015, I applied color coding based to identify three types of text in the standard:

The result is actually pretty surprising. We find that 81% of the text represents concepts which were already included in ISO 9001:2008, and only reworded in some fashion. The bulk of the changes — 13% — were done to comply with Annex SL, and only 6% of the changes represented TC 176’s “experts” actually adding anything new of their own thinking. If you look at entire document color-coded, and zoom out, it looks like this:

It gives you a sense of how little actually changed in ISO 9001:2015. Even I am surprised by this.

This also highlights two major problems with the new version. First, that while so little was actually changed, nearly all of the green text was re-worded in some way, thus making it more confusing. TC 176 should have probably left the original text in place, as it was, to reduce confusion. Second, that TC 176 is not comprised of “big thinker” experts who take the best from industry and incorporate it into the standard, but instead spent much of their efforts complying with a mandate from the ISO Technical Management Board, through Annex SL, instead. The TMB features no quality experts at all on its known staff, although ISO keeps much of the membership of the TMB secret.

What do you think? Give your opinion in the O-Forum.