The entire web presence of the certificate mill operator Daryl Guberman has been wiped from the internet in what appears to be retaliation from a jilted former partner.

A huge number of websites related to various offerings of Guberman PMC LLC was instantly erased in the past few days, along with the personal YouTube channel of Daryl Guberman, the latter of which was comprised of thousands of videos. A set of cached pages appears to show the websites were first defaced by someone purporting to support Guberman’s former partner, Don LaBelle. The defaced pages were rewritten to remove defamatory material previously published on the sites, and instead replaced with material defaming Daryl Guberman.

The defaced pages are now replaced with either standard “page missing” disclaimers, or generic information.

Cached versions of the defaced sites claimed, however, that LaBelle had discovered Guberman was working with a third party named “Sheri Sykes” to open a competing ISO certification body, circumventing LaBelle. The sites claimed that Guberman had stolen intellectual property from LaBelle and was using it without permission. One of the defaced sites claimed that “LaBelle’s team” had forcibly taken over Guberman’s email accounts, and was threatening to post the material found therein.

One page, now removed, included a “Public Apology to Oxebridge / Chris Paris,” but the content of that page was not available in the cached version.

For years, the two men operated the certificate mill Guberman PMC while claiming to be “independently accredited” by another company, the “American Board of Accredited Certifications” (ABAC), which they also ran. The two used their extensive network of a dozen or more websites to falsely accuse those they viewed as competitors, including Oxebridge, ANAB and the IAF, of fraud, terrorism, antisemitism, and other crimes.

The ABAC website now reads that it is “dissolved” and “no longer in the accreditation business.”

The website for Guberman PMC comes up empty, but includes a meta tag reading the website is “closed permanently.”

The YouTube channel for Guberman, which included thousands of conspiracy theory videos featuring Guberman himself, is also shut down. That channel falsely accused hundreds of companies, individuals, and US Government agencies of fraud, supporting terrorism and hate crimes. The content showed up prominently in Google search engines, but few videos had more than a dozen views each. Daryl Guberman appeared wholly unaware of this fact, and would produce upwards of five videos a day, some with only 2 or 3 views. In some videos, he would claim to have special guests such as President Donald Trump, only to be seen conducting mock a “interview” while talking to a photograph.

Guberman’s hate-filled screeds would receive widespread internet circulation due to the efforts of LaBelle, who operates a press release distribution network through another company, Industrial PR Net. LaBelle later wrote to the court denying he had any role in the various Guberman companies, contradicting press releases published by LaBelle’s own company. LaBelle was listed as the webmaster for many of Guberman’s websites, according to official Whois entries.

The material which temporarily defaced the Guberman websites claimed that ABAC had “permanently suspended” the accreditation for Guberman PMC, and openly labeled the Guberman company as a “fraud” and “certificate mill.”  The posted notice also claimed that Guberman had been using the logo of LaBelle’s other company, Industrial Leaders Group (“ILG”) without permission. The notice then threatened that parties sympathetic to LaBelle would release further information in “January 2021” about the scandal. 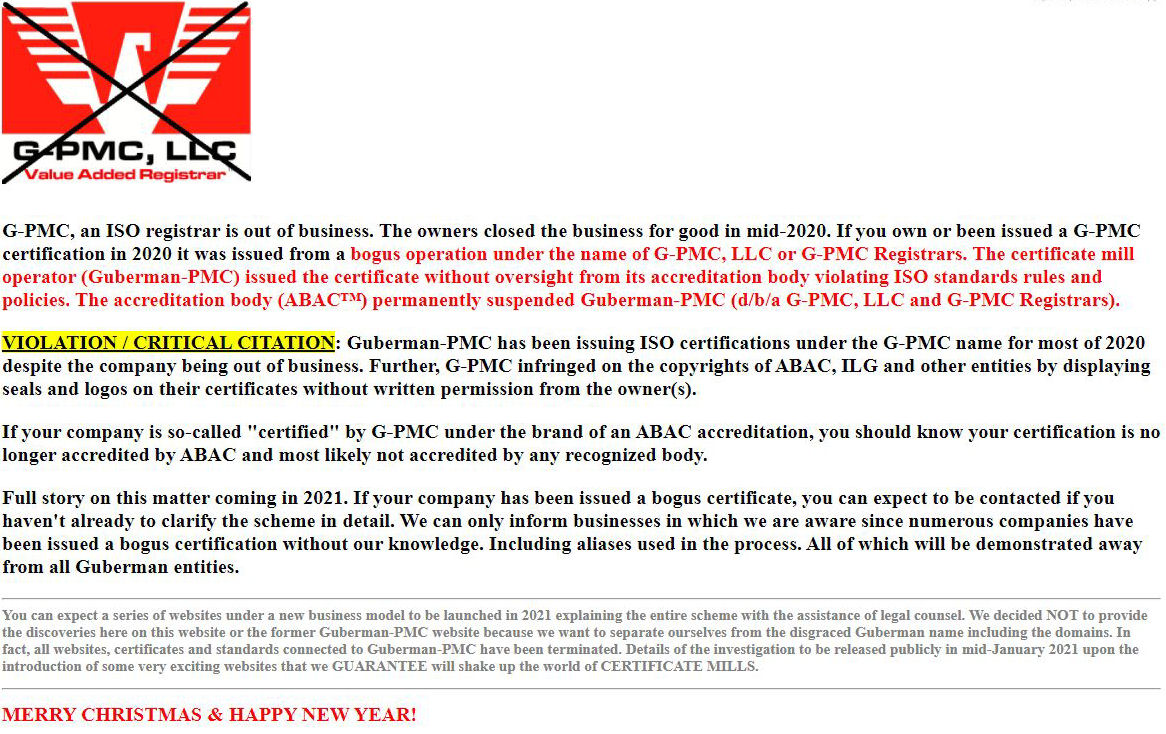 Despite the claims that Guberman PMC is shut down, official Connecticut records show the company is still active. 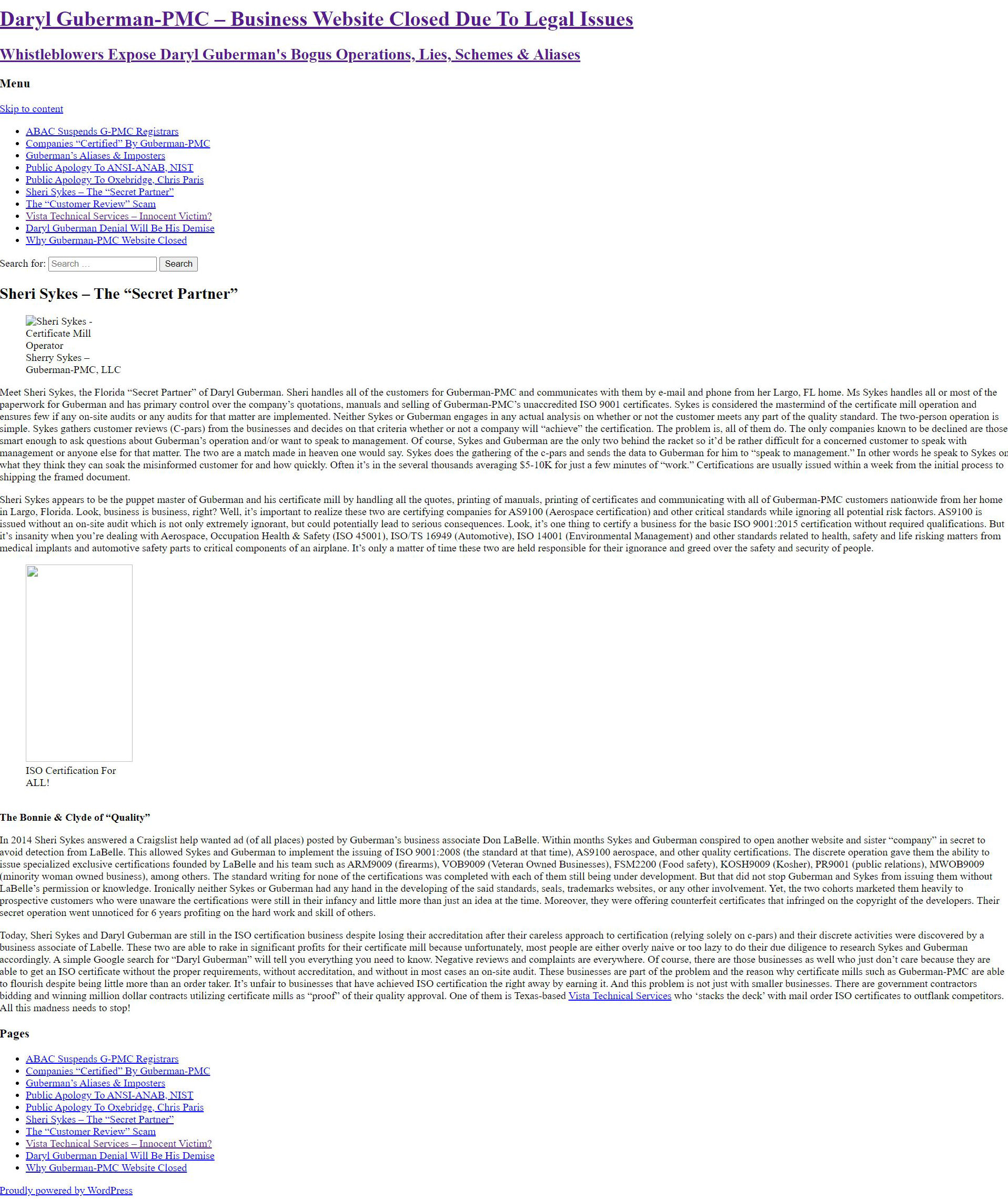 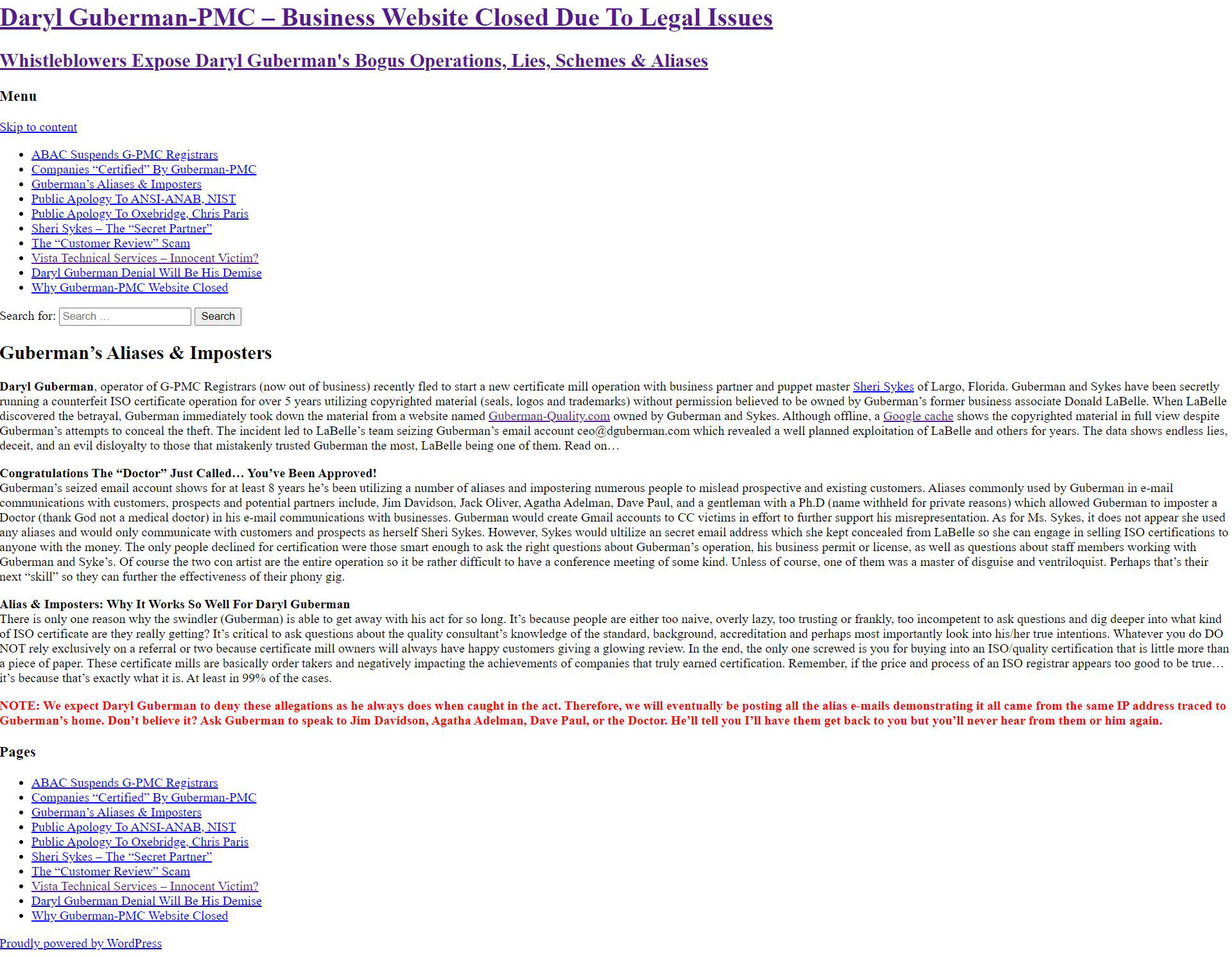 One page was titled “Whistleblowers Expose Daryl Guberman’s Bogus Operations, Lies, Schemes & Aliases” and admitted long-standing accusations originally published by Oxebridge, revealing that Guberman had been using a number of pseudonyms to falsely inflate the size of his company’s operations. The press release also confessed to “LaBelle’s team” having forcible “confiscated” the emails of Guberman.

Guberman and Sykes have been secretly running a counterfeit ISO certificate operation for over 5 years utilizing copyrighted material (seals, logos and trademarks) without permission believed to be owned by Guberman’s former business associate Donald LaBelle. When LaBelle discovered the betrayal, Guberman immediately took down the material from a website named Guberman-Quality.com owned by Guberman and Sykes. Although offline, a Google cache shows the copyrighted material in full view despite Guberman’s attempts to conceal the theft. The incident led to LaBelle’s team seizing Guberman’s email account ceo@dguberman.com which revealed a well planned exploitation of LaBelle and others for years. The data shows endless lies, deceit, and an evil disloyalty to those that mistakenly trusted Guberman the most, LaBelle being one of them.

Sykes is considered the mastermind of the certificate mill operation and ensures few if any on-site audits or any audits for that matter are implemented. Neither Sykes or Guberman engages in any actual analysis on whether or not the customer meets any part of the quality standard. The two-person operation is simple. Sykes gathers customer reviews (C-pars) from the businesses and decides on that criteria whether or not a company will “achieve” the certification. The problem is, all of them do.

At least a half-dozen other pages were found in various caches from approximately one week ago, but since were removed, including one page titled “Public Apology to Oxebridge / Chris Paris.”

Guberman and LaBelle lost a US Federal lawsuit launched by Oxebridge, alleging defamation and illegal wiretapping lawsuit. The Judge in that case awarded Oxebridge $1.6 million to be split between LaBelle, Guberman and the company Guberman PMC LLC. The two men were cited with contempt of court.

Both men now face a second Federal suit attempting to enforce the Court’s orders, and adding additional requests for damages due to new defamatory material published since the first suit. Guberman and LaBelle are already in collections for their current legal losses, and face liens on their property

During the Oxebridge lawsuit, Guberman and LaBelle refused to recognize the authority of the US Federal Court system, and ignored multiple court orders. At one point, Guberman sent an email to the Judge’s chambers with an apparent threat of violence, taunting the judge to “come and get me“, and saying police would have to “take his last breath.”

Guberman and LaBelle adopted “sovereign citizen” defenses, alleging the US court system has no jurisdiction over them. The sovereign citizen movement has been named by the FBI as a major source of domestic terrorism within the US. Most of their court filings were taken from copy-and-paste forms published on a prominent “SovCit” website.

Upon losing the Oxebridge lawsuit, Guberman and LaBelle filed two separate lawsuits against the Judge in that case, both of which were thrown out in mere hours. They then published material accusing the Judge of Nazism, with one video featuring Guberman dressed as a Jewish concentration camp survivor. 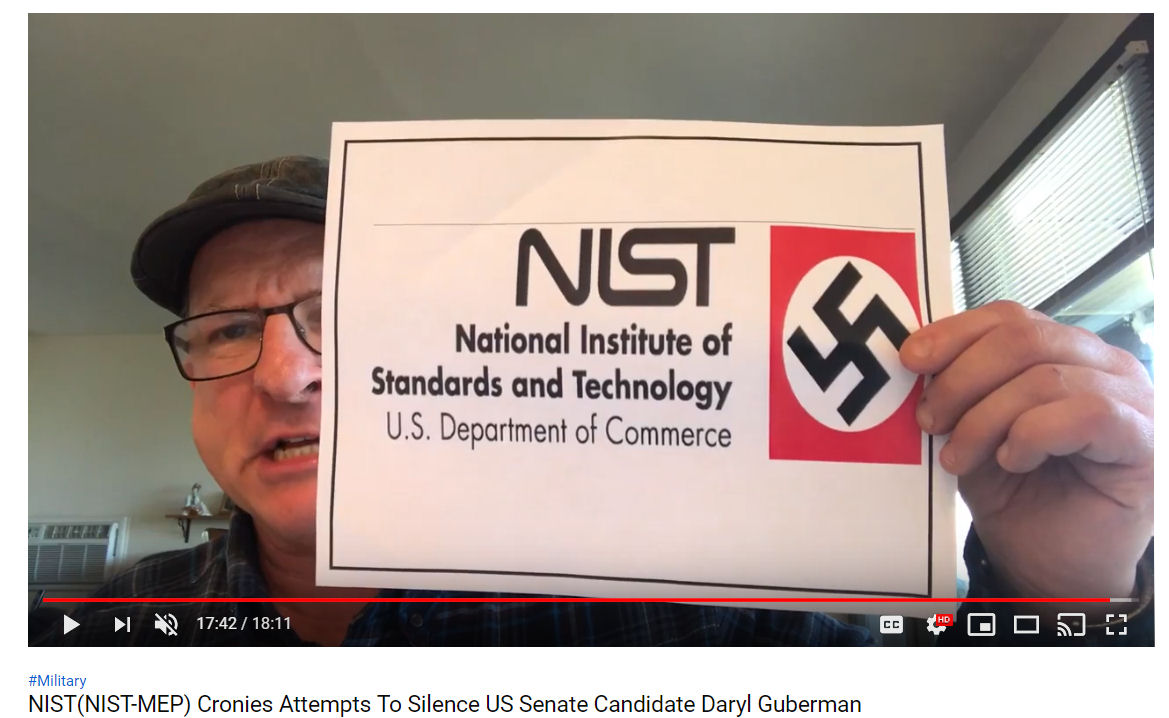 Guberman offered a host of dubious certification services, including one for Veteran-owned businesses. The website at www.vob9009.com also not indicates it is shut down. In order to boost their credentials in that market, Guberman falsely claimed he had multiple veterans on his various Advisory Boards; in fact, he used photos of dead veterans without permission in order to falsely inflate his alleged “Boards.”

Guberman was investigated by the US Federal Election Commission after a complaint by Oxebridge revealed he had been running for US Senate and soliciting campaign donations for years, without ever having filed as a candidate. The FEC dropped the complaint, indicating that Guberman was not likely a serious candidate, and had claimed he never collected any money. The campaign website for Daryl Guberman is also shut down. 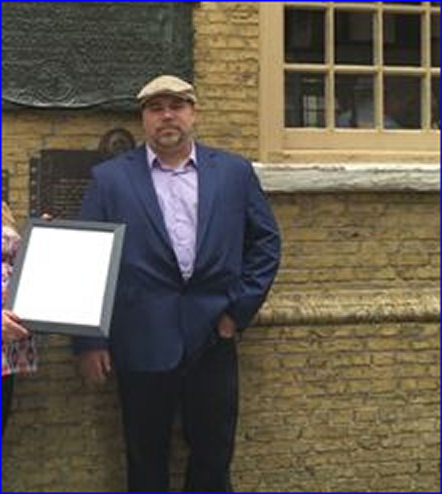 Guberman illegally intercepted a phone call between Oxebridge founder Paris and an alleged “Board Member” of Guberman PMC, Kelly Rak of Laurel Wire Company. He then published the call and subsequently refused to remove the recording when ordered by the Federal court. He dodged arrest under wiretapping laws only because local police felt the recording violated civil law, not criminal law.

Guberman had previously been arrested for driving under the influence.

To date, Oxebridge has won every legal challenge it has raised, with the cases often ending in private settlements paid to Oxebridge to compensate for defamation and tortious interference in business.

After Oxebridge filed an official ethics complaint against him, the US Air Force Chief Software Officer Nicholas Chaillan hinted at his intent to launch a smear campaign against Oxebridge by quoting the Guberman materials. That move resulted in escalated complaints against Chaillan to the USAF Inspector General and other oversight bodies.

This story was rewritten to reflect that the Guberman sites were likely defaced; the original version of the story reported that it appeared Guberman had shut his companies down voluntarily.