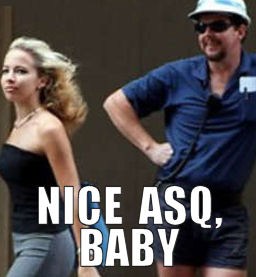 Fair warning: readers who are anti-feminist may want to stop reading. This post doesn’t “go there” but it could be interpreted that way. You can, however, read this without applying any pre-existing political viewpoint you may have, if you can muster it. Recently, on the ASQ LinkedIn forum, I posted a copy of my article ASQ Quality Progress Refuses to Publish Articles Critical of ISO 9001, which found most of the LinkedIn readers agreeing with the facts presented, but a handful loudly disagreeing. The people making the counterargument, one discovered quickly, had all (but one) been previously published by ASQ, and were thus the beneficiaries of ASQ’s “elites only” publishing policy, so they had a dog in the fight: changes to the policy might see them suddenly face competition for the column inches they currently have a monopoly on.

One of the arguments made was that ASQ arbitrarily applies a filter of “professionalism” to its pieces, rejecting those articles which it deems — again, arbitrarily — are not written “professionally” enough. I routinely debunk this by pointing to the Fall 2005 edition of the ASQ Audit Division’s newsletter, Vista, which included an article entitled Stop Bitching and Complaining and Get With The Program! What’s Wrong With You Folks?!” I made the point that when an article is written by a “friendly” — in this case, CB auditor Rod Goult promoting RABQSA — they suddenly deem it “professional” to publish an article with a sexist profanity in the title. Mind you, I didn’t drop the b-word in my article, but I did link to the ASQ piece.

To which ASQ Fellow Duke Okes — the guy who argued that no one has a right to criticize ISO 9001 once its published, and that anyone who disagrees with risk-based thinking shouldn’t be working in the profession at all  — didn’t hesitate to use the word outright, and chimed in to say “bitch” is a perfectly innocent word, because his 1984 dictionary told him so: In the real world, where those of us exist who don’t have a need to reflexively apologize for ASQ, we know the term wasn’t invented in 1984, but some 900 years ago via the Old English word bicce, meaning female dog, and the usage in verb form to represent “complaining” comes exactly from the idea that women can be “difficult, annoying and interfering” and thus should be referred to as whining dogs.

Now, again, I don’t want to get into a political argument about “feminazis” and “PC police” and all that. The point is that ASQ published an article with a word that is so charged, it would be bleeped on the evening news and has no place in a professional journal, and that disqualifies ASQ from claiming some kind of screening process for “professionalism.” That’s the point.

Come In, Rape a Seat and Make Yourself Comfortable

Meanwhile, just a day later in another discussion about AS9100 PEARs (don’t ask how that devolved so quickly, it’s the internet), ASQ fan Godfrey Partridge thought it would be funny to drop a rape joke into the mix. Or, more accurately, a RAPE joke. It’s since been deleted, but Partridge came up with a clever re-naming of PEAR so it spelled R-A-P-E instead. When challenged about the fact that making rape jokes in a professional ASQ forum might not be so smart, he apparently called Duke Okes to borrow his copy of the 1984 Orwellian English De-obscenifying Dictionary and reported rape actually means “to take or steal.” He then became insulted that anyone would think otherwise. Imagine!

I’m curious if either Partridge or Okes would be so forgiving of the words “bitch” and “rape” if they were part of a rap song sung by a guy with dreadlocks during one of their daughter’s high school parties. I’m guessing in such a case, they might turn to a more traditional dictionary definition, and proceed to full-on apoplectic meltdown.*

Stop Picking At It and It’ll Go Away

But wait, there’s more. Facing this apparent trend, I then opened a new conversation in the ASQ group which asked how ASQ could tolerate this kind of behavior by an ASQ Fellow and others, as well as how that original Vista article could have passed muster. In my post, I predicted ASQ’s response by saying “a low-paid understaffer” would chime in with some template nonsense like “we do our best to ensure a positive user experience.” As if on cue, ASQ low-paid understaffer Julia McIntosh messaged me privately, with the following template nonsense:

Thank you for bringing this issue to our attention. We will look into these comments per the ASQ Code of Ethics for members. At which point she shut down the discussion, preventing anyone else from commenting. Which means, of course, there’s no way for ASQ to “look into” anything, since she never even asked who made the comments in the first place. So ASQ plans to do exactly nothing, despite the fact that a number of women — and men — have since complained about the issue. Which begs the question everyone is really thinking: is Julia McIntosh a real person, or just a chat bot? I mean, can anyone seriously type those empty, vacuous words and have a pulse?

Going further to purge the ranks — not of people dropping loaded words in professional forums, but of noisy troublemakers who point it out — McIntosh then put me into moderation, so I can no longer post on the ASQ group without my material first being screened by her. Which is fine, it’s ASQ’s forum and they can do what they want, but I did notice that both Okes and Partridge are still posting freely, proving the original point: ASQ cares more for its Fellows and fans than for its Code of Ethics or reputation.

I get it. ASQ’s home office doesn’t like me. The Sections love me, because I deliver engaging and completely original presentations, and don’t charge them a dime. But at the HQ, there’s no love. Me and my team found out about their dubious fundraising activities. We filed an abuse of power complaint against the US TAG to TC 176, which is managed by ASQ. We reported them to the FTC for unfair trade practices, after they tried to scuttle one of my speaking events and hand it over to a TAG leader. We reported how ASQ worked to keep the US TAG 176 membership hidden, even from the other members, despite requirements that their work be public. We reported how the ASQ Administrator failed to correct the categorization of TAG 176 members, allowing the numbers to artificially reduce the influence of consultants. As mentioned, we’ve reported on the refusal to allow “critical” discussions of ISO 9001, presumably to ensure the TAG can keep selling books and seminars. And now the “bitch rape” thing. Who at ASQ thinks this is a pattern worth holding onto? Who thinks any of this is helping the ASQ brand?

I’m sure over at the Milwaukee offices it just looks like I am harassing them. It looks personal. But of course, it’s not; all of the complaints and reports are based on real evidence, real things that were done by real people; ASQ is always given a chance to correct the record, provide their side, fix what’s wrong. All of these things contradict the ASQ mission, and some of them may even violate the law. But it’s part of the bigger plan, to force improvement on the ISO certification industry because giving them over a decade to fix it themselves has utterly failed. ASQ is a tiny part of the bigger scheme, but to them, certainly it looks personal. Factor in that ASQ operates in a self-insulating echo chamber, and they must be absolutely baffled.

In coming months, I’ll be trying to get a face-to-face meeting with ASQ CEO Bill Troy to figure this out. But clearly ASQ has to do some deep soul-searching and figure out how to act in ways that reflect its alleged values and ethics. Hiring an ombudsman might be a good start.

UPDATE 4 April 2015: Julia McIntosh has added a “pinned” notice to the ASQ LinkedIn forum that “per group rules, we don’t allow personal attacks, harassment, or offcolor remarks. Such comments will be deleted without warning.” Yet, nevertheless the personal attacks by ASQ’s friendlies remain intact. Take that for what you will.

(* Full disclosure. In a private message to Okes, I used the word “dick.” I’m waiting to tell him the word simply means a “British chap.”)