ASQ Claimed over $7.3 Million in Unrelated Business Income, But Filed for $29,000 Refund

Full disclosure: I am not a tax expert or tax lawyer. I’m just raising questions about things I see which, to my layman’s eyes, look curious.

In analyzing the 2019 tax filings of ASQ, I noticed that the group had claimed over $7.3 million in unrelated business revenue. Normally, that’s subject to Unrelated Business Income Tax, or UBIT, but there was no record that ASQ had paid anything to the IRS. Also missing from the public filings found on Guidestar and ProPublica was the required filing of Form 990-T, which lists such payments and details of unrelated business income (UBI).

ASQ has refused to release its tax filings to those asking for it, instead pointing them to Guidestar and ProPublica. That’s not quite how it works, and ASQ is obligated under law to provide these documents to the public. They don’t get to wait until the data is scraped by third-party websites. To get around them, I manually downloaded over 75 gigabytes of data from the IRS’ public non-profit records, for the years 2018 through 2021. I then used some complicated searches here to find any and all filings by ASQ. I uncovered the otherwise unpublished Form 990-T from 2019.

That form is… troubling.

First of all, the 990-T’s for both 2018 and 2019 are illegible messes, with handwritten scrawl all over them, manual edits to the forms, and illegible figures and dates. I didn’t think submitting such a questionable document was even legal. The 2018 form was apparently made by CEO Ann Jordan herself, but the 2019 one was allegedly prepared by the Troy Marine of Baker Tilly, a professional firm. It’s an embarrassment, and the illegibility of the form alone should raise the IRS’ suspicions. 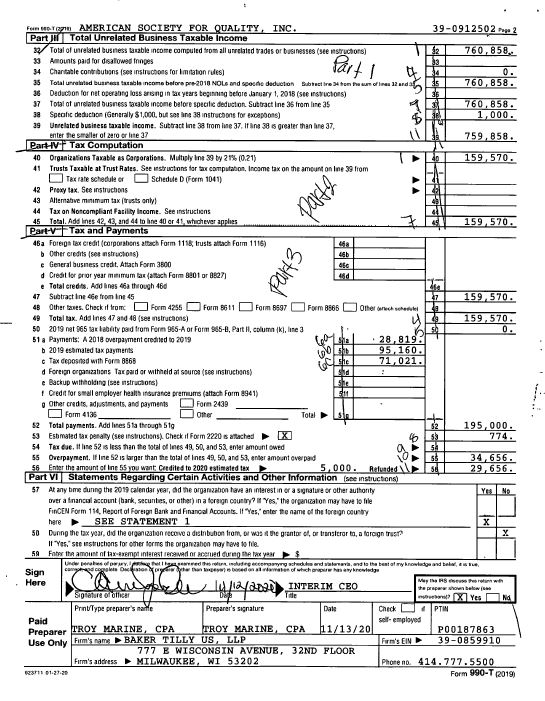 Looking back at Form 990, ASQ listed over $7.3 million in “total unrelated business revenue.”

ASQ then characterized the source of this unrelated revenue as “certification” and “other program service revenue.”

Here’s where things get sticky. In a recent public (and totally batshit crazy) FAQ published in response to a member petition, ASQ — led by attorney Ann Jordan, who also signed all of ASQ’s tax filings — essentially admitted it has been breaking the law since 2004. From that FAQ:

In a 2004 ruling, the IRS determined that a Section 501(c)(3) membership association’s certification program generates taxable unrelated business income (“UBI”) to the association.

In that FAQ, ASQ makes the tortured logic that it had to ignore the member petition and spin off a new organization, “ASQ Excellence,” so that it could comply with the law. That only happened a few years ago, meaning ASQ has been in violation of the law between 2004 and the ate of the spinoff. However, even with “ASQE” spun off, as of 2019, ASQ is still crediting “certification” on its tax filings/ However, now it’s been moved to the column of “unrelated business income” in order to comply with the law.

(ASQE doesn’t appear to have filed a tax return yet.)

The same FAQ then goes on to boast about the revenue generated by “certification,” ignoring the fact that every dime earned for certification is not allowed for 501(c)(3) organizations like ASQ. Whatever.

The FAQ then admits that the IRS — which audited ASQ in 2017 after an Oxebridge complaint filed a year earlier alleged tax irregularities — threatened to strip the organization of its non-profit status altogether, and ASQ only dodged this bullet by promising to make changes:

Part of ASQ’s successful passing of the 2017 audit included reliance by the auditor that ASQ was implementing several changes that were not fully implemented at the time of the audit.

However, the second part of this question regarding how the changes to other parts of ASQ’s business affect the percentage of revenue generated illustrates the risk that third party experts like the IRS, tax experts and legal counsel have warned ASQ’s Board of Directors about for years. That fluctuation can cause UBIT to be higher than the allowed percentage the IRS deems acceptable (usually 15-20%) which could then cause ASQ to lose its 501(c)(3) tax-exempt status and violate its Certificate of Incorporation and bylaws. This is why the Board followed expert counsel to create ASQE and mitigate ASQ from that risk.

Napkin math: $7.9M in unrelated business income (UBI) represented about 18%, so if ASQ is right, they came close to being stripped of non-profit status, but didn’t cross the threshold.

But it may not matter. Any “UBI” over $1,000 is taxable. So they can sell certifications — and there was no need to create ASQE to do so — provided they pay taxes on anything over 1 grand.

Astonishingly, no. In fact, they requested a refund.

The details of this calculation appear on the previously missing form 990-T for 2019. On that form, which is an illegible mess, a whole host of new irregularities appear to emerge.

ASQ’s Form 990-T only claims $6.9 million in unrelated business income, and doesn’t mention the revenue for “other program service revenue” that appears on Form 990. That’s over $363,000 that just disappeared from the books.

Now comes the really mystifying part. In order to justify not paying taxes on the amount, ASQ then deducted a whopping $6.1M in “cost of goods sold.”

This also debunks the ASQ FAQ which brags about how great the certification sales are doing; if we believe them, then certification only really earned $832,000, but it cost a mind-boggling $6.1 million dollars just to earn that. I’m no business whiz, but to me, if you’re spending over $700 to earn $1, then maybe you’re not doing it right. And remember, ASQ is populated by “business management experts.”

But let’s press on. ASQ’s actual cost of goods sold (or “COGS“) is then defined in detail an attachment to 990-T, and we see ASQ claimed everything and the kitchen sink:

The problem here is that COGS is typically reserved for companies that provide physical products or merchandise, like Girl Scout Cookies or Salvation Army t-shirts. COGS is typically the cost of raw materials, printing, etc. It’s not allowed to be used for expenses, and it’s not supposed to be used for service providers at all. (Instead, they are supposed to file “Cost of Services,” which ASQ does not appear to have done.)

Specifically prohibited from COGS are advertising and marketing, but seven out of seven of the COGS claimed by ASQ were labeled by ASQ as, specifically, “expenses.”

(I’m also pretty sure that any salaries that were calculated in the COGS were also calculated in general operating expenses, meaning ASQ would have double-dipped, but there’s no way to know that for sure without a forensic analysis. Also, if you’re going to use a generic term like “global expenses,” shouldn’t you define what that is, exactly, especially if not doing so make it look like criminal tax evasion?)

Ironically, the other things sold by ASQ — like books and mugs and hats — would justify COGS, since they require physical raw materials to make. Yet ASQ didn’t claim any costs for those things, only the one thing a 501(c)(3) isn’t supposed to sell in teh first place: certifications.

Now, again, a tax preparer or attorney may see a perfectly valid explanation for this, and if so, I invite them to write me so I can clear this up. I’m just not seeing it.

Finally, all of this allowed ASQ to not only not pay taxes on the revenue, but request a $29,656 refund:

So, while I await a more expert opinion, I’m left with the following takeaways:

Something is just not right here. I really hope someone with a tax background can help clear this up. If so, I’ll update this article accordingly.