Employees with the CMMC Candidate C3PAO company Cask Government Services were involved in a money laundering and federal bribery scheme from 2015 through 2019 under which one former employee has already pleaded guilty with Federal prosecutors.

According to court records, a Contracting Officer Representative (COR) at the Space and Naval Warfare Systems Center (SPAWAR) worked to steer government contracts to preferred defense vendors if they agreed to give jobs to San Diego real estate broker Liberty Cruz Gutierrez. According to felony charges filed by Federal prosecutors with the US District Court Southern District of California, Gutierrez was given paid positions at three different defense contractors for work she did not perform. In return, the SPAWAR representative used his position to ensure those companies were awarded Federal contracts worth many millions of dollars.

Oxebridge whistleblowers have now identified Gutierrez’s employer, named only as “Contractor-1” in the Federal charges, as Cask Technologies LLC, also known as Cask Government Services. Cask was one of the first CMMC Third Party Assessment Organizations (C3PAOs) approved by the CMMC Accreditation Body, and its staffers were some of the first Provisional Assessors. Cask’s listing on the CMMC-AB Marketplace page appears as follows: 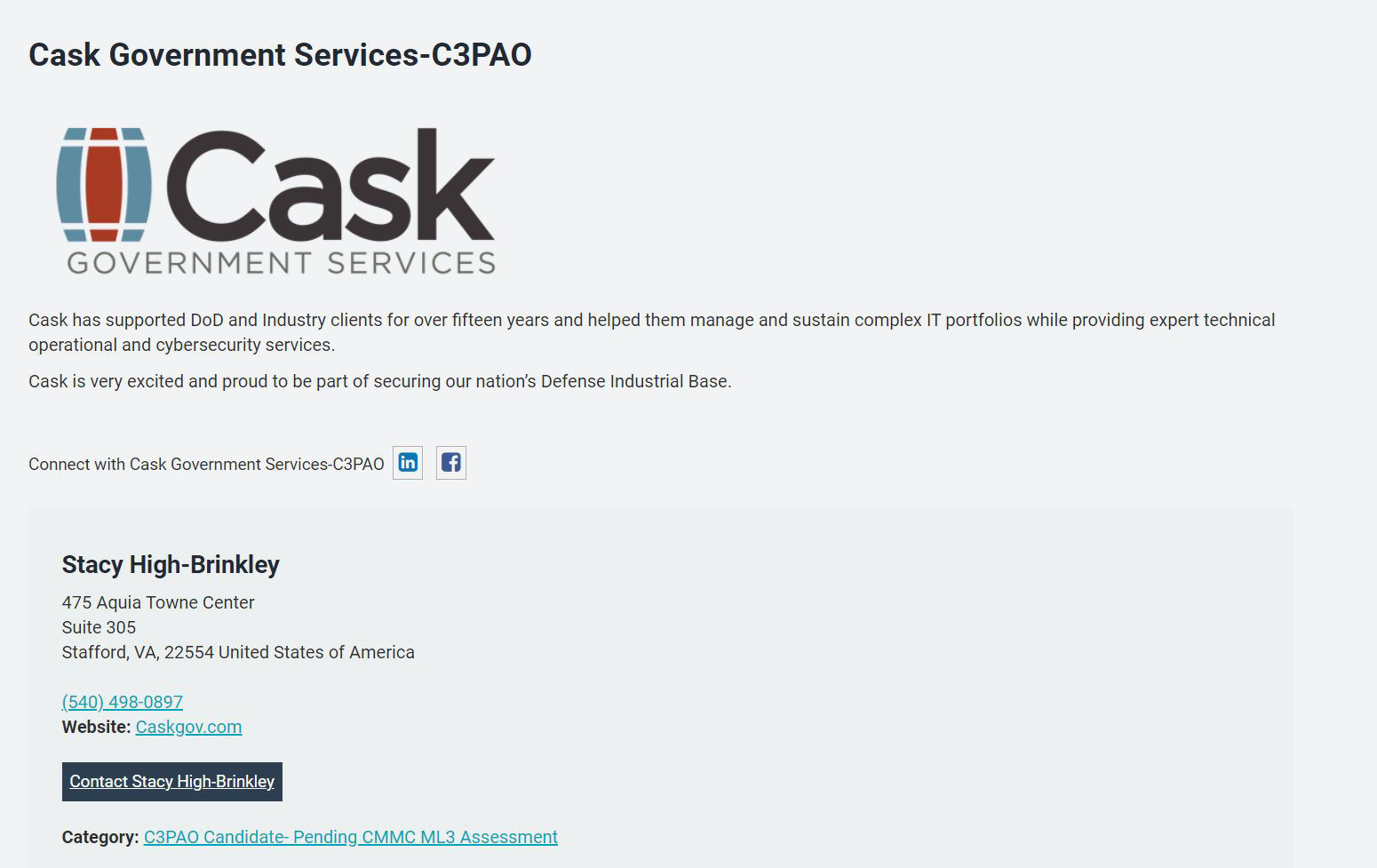 The CMMC-AB claims that candidate C3PAOs must undergo “organizational background checks” and other vetting before being awarded the role.

According to data provided by sources and confirmed by Oxebridge, the SPAWAR COR referred only as “Individual-1” is James C. Soriano. Soriano’s LinkedIn profile confirms he worked at SPAWAR, under its new name Naval Information Warfare Center, and lists him as currently “retired.” 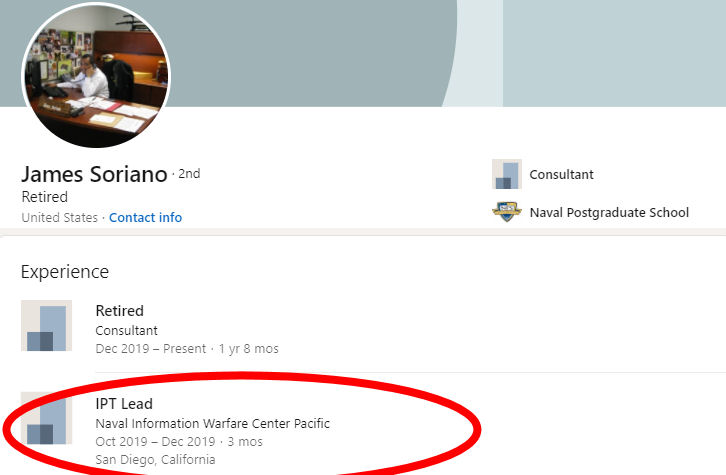 The court filing claims that Soriano was “a close family friend” to Gutierrez, a fact supported by social media posts. Oxebridge discovered a Facebook profile for Soriano which includes the same photos seen in the background of his LinkedIn profile photo. Soriano’s Facebook profile shows him as friends with Gutierrez and reveals their friendship dated back to before the scandal began. In one 2013 post, Soriano is seen wishing Gutierrez a happy birthday.

The Federal filing claims that in 2015 Soriano conspired to get Gutierrez a job with Cask, even as she continued to work in the real estate industry. Cask, in return, would receive lucrative DOD contracts under an “Other Transaction Authority” (OTA), a contracting device used by DOD to award work without being subject to normal procurement or FAR rules. Once Gutierrez was hired by Cask in October of 2015, Soriano used his position to ensure Cask was given a Task Order worth almost $3 million under an OTA.

The OTA suspected to be involved is SOSSEC, for which Cask reportedly provided software implementation services for the US Army’s Program Executive Office – Aviation. The Cask website still lists itself as operating under the SOSSEC OTA, along with another OTA called IWRP.

Gutierrez was referred to by Cask as a “Management Analyst/Associate” but admitted in her plea agreement that she never performed any such work. Gutierrez earned nearly $600,000 in salaries under the scam. She then shared her illegal salary payments with Soriano, who hid some of the money in a “golf bag,” according to court filings.

In October 2019, Cask offices in Stafford VA were raided by numerous federal agencies, including the FBI and DOD.  Sources say the raid was partially prompted by the Gutierrez/Soriano bribery activity, but also by a whistleblower accusation that Cask was falsifying its status as a woman-owned, disadvantaged business. Cask is owned by Elizabeth Guezalle but sources tell Oxebridge its daily operations were managed by her husband, Mark Larsen.  The court docket then reveals that multiple Cask staffers were aware of the Soriano deal. The docket refers to one Cask employee as “Individual-2” who managed “day-to-day operations.” Sources have indicated that Larsen ran daily operations, and therefore he is most likely “Individual-2.” However, Oxebridge confirmed that Guezzale herself was involved in salary decisions related to Gutierrez, and has not been able to substantively confirm who “Individual-2” is.

The fact that Gutierrez signed a plea deal suggests that federal prosecutors are using her as leverage to go after someone else, perhaps executives at Cask, or to pursue James Soriano himself. To date, there is no indication that any other DOD officials were involved in the scam.

In addition to Gutierrez, the court filings detail how Soriano successfully conspired to get his wife a job at Cask. The Facebook profile for Soriano names his wife as Weng Cornejo Soriano. Subsequent searches then reveal a photo of the same woman appearing on a LinkedIn profile for “Rowena Cornejo-Soriano,” and listed as working for Kilderkin Group from 2017-2019. She was reportedly hired as a receptionist. 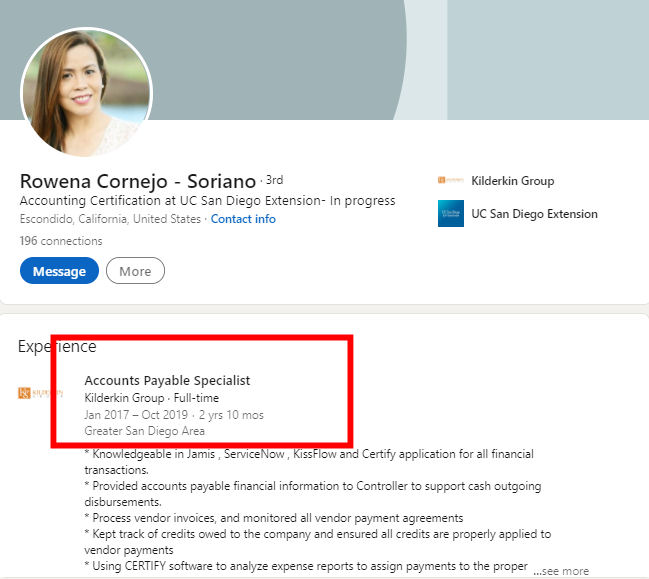 Kilderkin and Cask are both owned by Guezzale, along with Pinao Consulting. According to public business records, Cask holds an organizational position in Kilderkin, and that Mark Larsen was listed as the company’s Registered Agent: 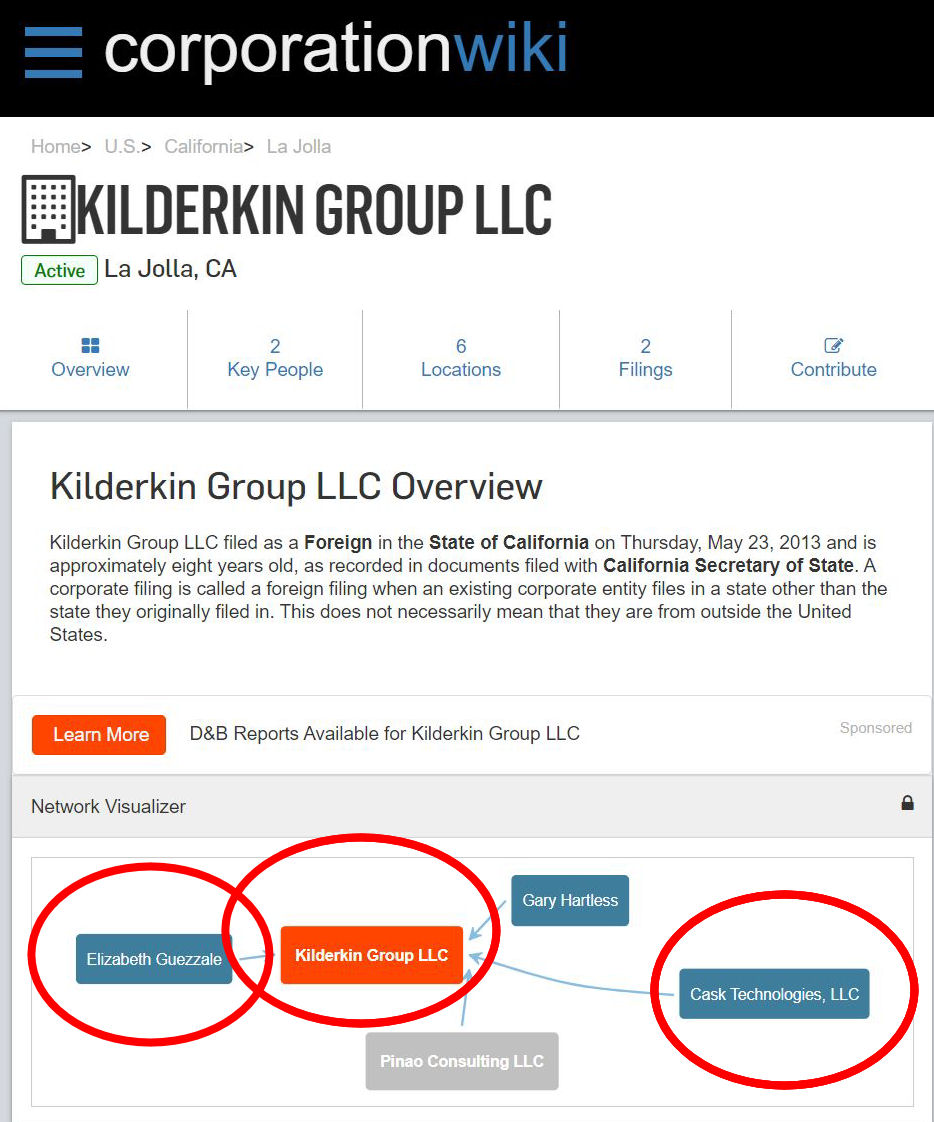 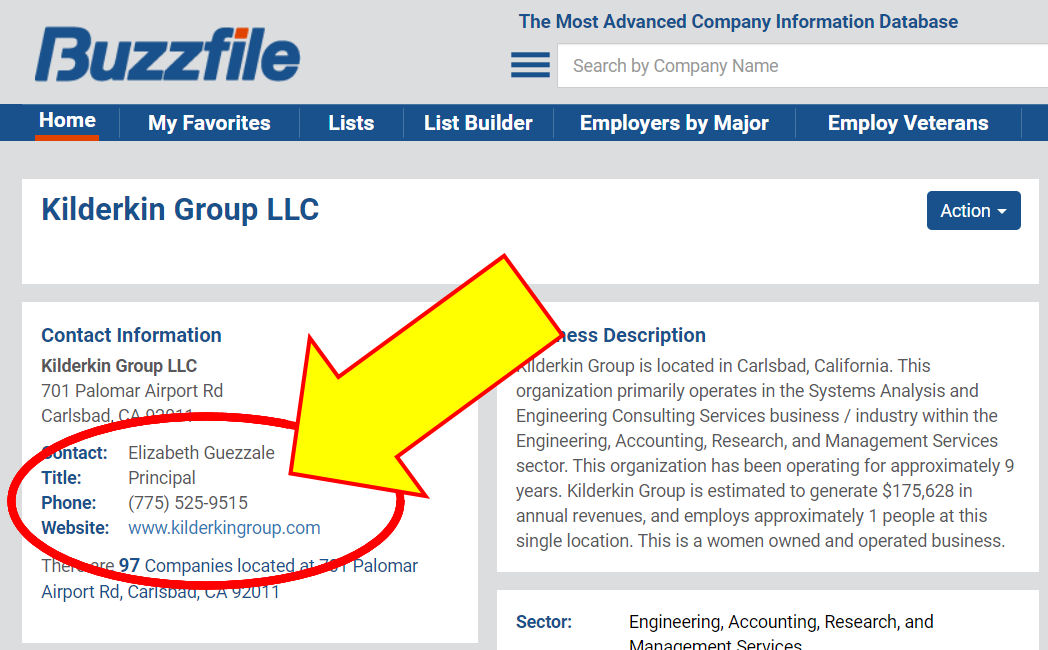 Sources have reported that Cask was introduced to the CMMC scheme by former Board Chair Ty Schieber, who worked for Kilderkin Group in a business development role, possibly as a 1099 contractor. Schieber’s prior employer, Technology Associates, was also located in the same Virginia town as Cask. Based on prior investigations by Oxebridge, multiple sources reported that in late 2020 Schieber had approached companies known to him to get them “early access” to C3PAO slots, in order to make the CMMC program appear more mature than it was. This was done, sources say, to accommodate the aggressive marketing push made by the DOD’s CMMC architect, Katie Arrington, who repeatedly claimed that the program would result in over 1,500 companies achieving CMMC certification in 2021. To date, not a single company has been certified.

Schieber was a personal friend to Arrington, and previously worked as her superior at Dispersive Technologies. Schieber also donated to Arrington’s failed US Congressional campaign. On Schieber’s Facebook page, Katie Arrington is one of the only pages “liked” by him: 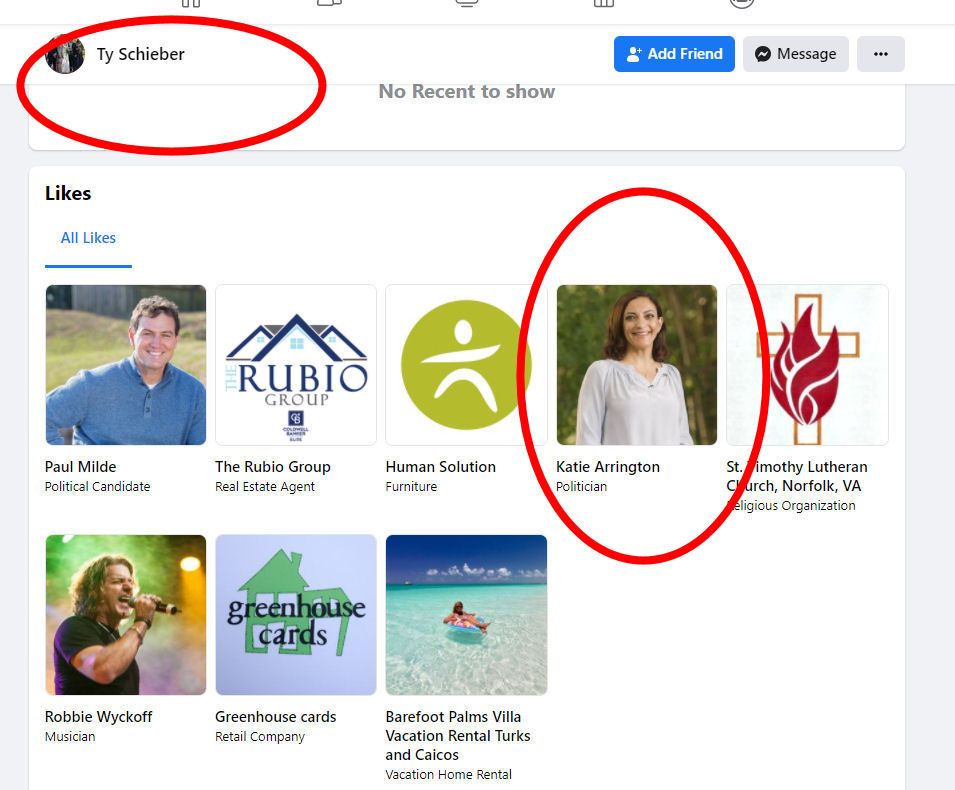 Soon after Arrington was hired by DOD and tasked with standing up the CMMC Accreditation Body, Schieber took control of the resulting CMMC-AB as its first Board Chair. The fact that Schieber was able to take over an organization created by his friend and former subordinate was dismissed by supporters as nothing more than the Defense Industrial Base (DIB) being “a small world.” Arrington and the DOD would later claim the DIB was comprised of 300,000 companies, seemingly debunking the “small world” argument.

Schieber was ousted from the CMMC-AB due to his involvement in the “Diamond” program, in which he solicited $500,000-per-person memberships. This was seen as “pay-to-play,” and resulted in widespread denunciation and howls of conflicts of interest.

Former Board members reported to Oxebridge that after Schieber was ousted, Arrington was so furious that she threatened to disband the organization entirely and hand over official duties to the competing bodies ANAB and A2LA.

Schieber is at the heart of another scandal involving how the CMMC-AB obtained its CAGE Code, a preliminary requirement prior to being awarded any Federal contract. In early 2020, Schieber submitted official “certs and reps” paperwork attesting, under penalty of arrest and imprisonment, that the CMMC-AB was a “tax-exempt” organization at that time. In fact, the CMMC-AB has never been awarded tax-exempt status. Arrington knew the AB was not yet tax-exempt, but nevertheless allowed the DOD to enter into an exclusive contract with the CMMC-AB, and did not report Schieber’s false statements. That issue is now being reviewed by the DOD Inspector General and Defense Logistics Agency.

Schieber’s interactions with Cask would have unfolded during the same period that the Gutierrez scandal was occurring, although it is not believed that either Schieber or Arrington would have been aware of the issues. Despite this, however, Cask should have undergone a thorough organizational background check, which may have identified the scandal. Cask was approved as a candidate C3PAO in 2020, apparently without incident.

The CMMC scheme in general, and the CMMC-AB in particular, have been criticized for collusion, corruption, and conflicts of interest. Arrington herself has been suspended from her DOD position over suspicion of leaking confidential secrets, and the CMMC-AB Board recently had to demand the resignation of member Regan Edens after he publicly clashed with a CMMC-AB Industry Advisory Council member on LinkedIn. Despite promises by the DOD that CMMC assessment costs would top out at just over $50,000, actual costs are now being quoted at over $150,000 per assessment, all but ensuring the program remains inaccessible to small defense companies. The CMMC-AB training materials, deemed by the DOD as mandatory for any official CMMC assessors, were found not to comply with the Americans with Disabilities Act; the CMMC-AB ignored the matter and has continued to perform the training while actively discriminating against disabled persons and veterans.

Despite boasting a tagline that reads “Built to Listen,” the CMMC-AB has refused to process formal complaints filed with it, nor conduct internal investigations into conflicts of interest.

Representatives from the CMMC AB and Cask did not reply to questions regarding this report prior to publication.

UPDATE 23 July 2021: The CMMC-AB has granted Cask Government Services full status as an “Authorized C3PAO,” elevating them from their prior status as a “Candidate C3PAO.” From the CMMC-AB official Marketplace website as of July 23: 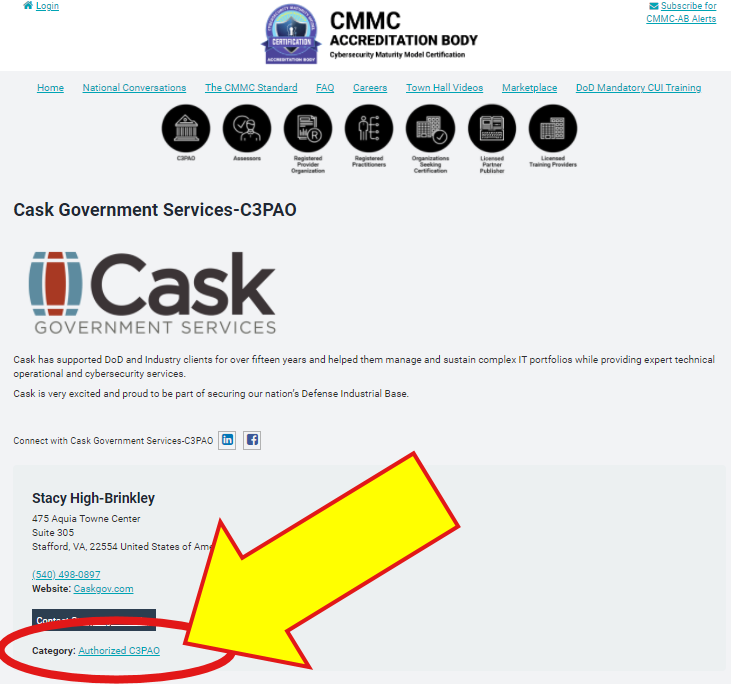